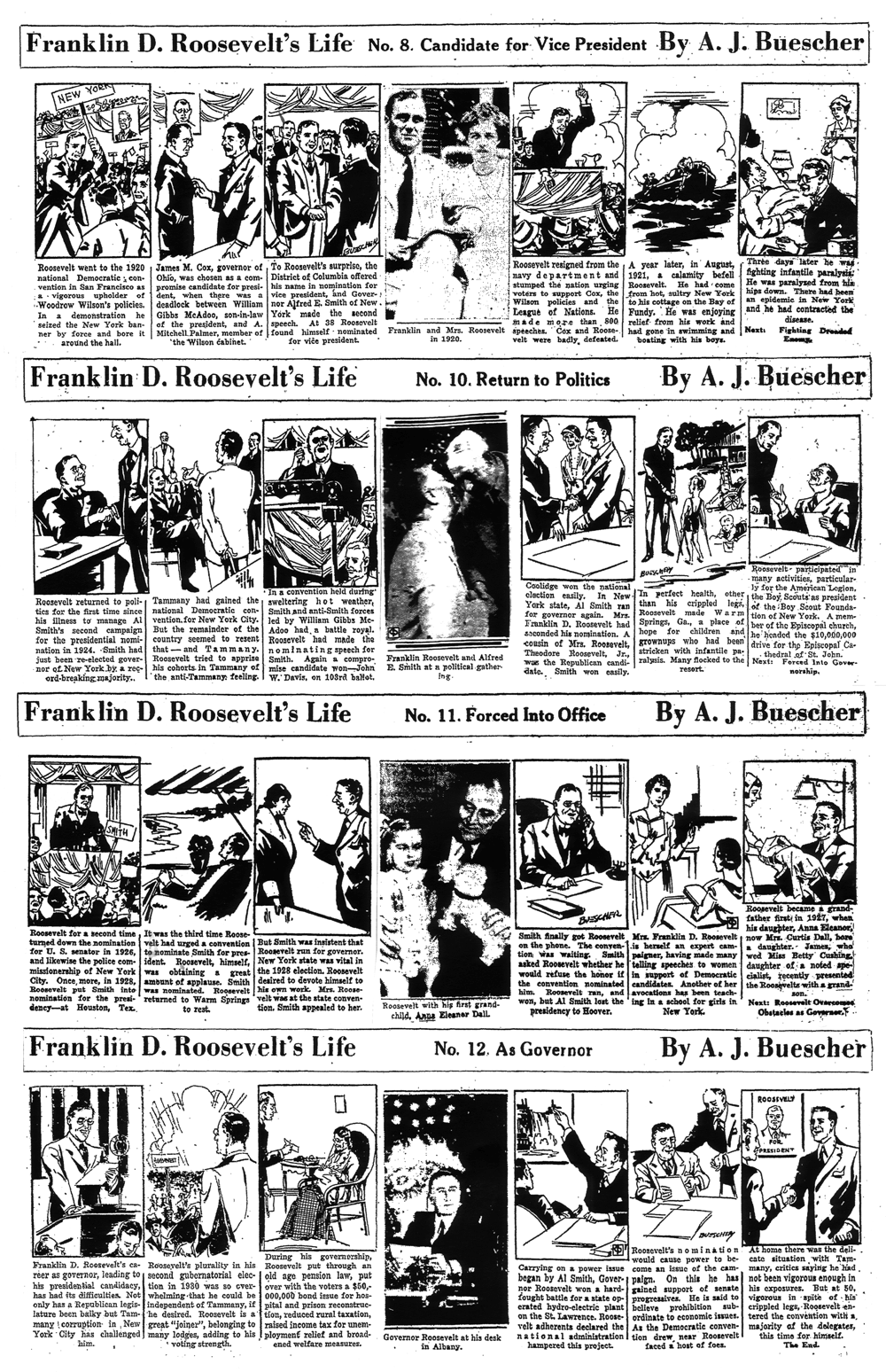 It’s only five more days until we finally pick our next president.  Comics from time to time have had a scene with a president in it, but most of the time, that was editorial cartoon territory. The Funnies have tried to steer clear of taking sides or even looking like it.  Until recently, comics that touched on controversial issues or political figures or their families were few and far between. There have been playful, softball presidential family titles though.  Once there was a Sunday series called “Strenuous White House Fun with the Roosevelt Kids” by Hy Gage for the Philadelphia North American Company for a few weeks in 1904, which showed Teddy and his overly playful offspring. Then there was a panel depicting a cartoony version of John F. Kennedy’s precocious daughter titled “Miss Caroline” by Fred Johnson and syndicated by Adcox. A cute idea, but it had probably the most ill-timed launch date of a syndicated feature ever, 4 November 1963. It lasted less than three weeks.  Then there was the 1977-80 United Feature Syndicate title “Rooftop O’Toole” by Jerry Fearing and Bill Farmer, which showed the adventures of the paperboy to the White House, regularly interacting with Amy Carter and the shade of Millard Fillmore.

But for the most part, presidential comics, if that can be a genre, are limited, straightforward biographical series resembling public-service announcements. The earliest I can think of was a series that was made about New York Governor Alfred E. Smith, running in 1928 as the Democratic candidate for president. It was drawn by a young Walter Frehm, later to draw the Ripley’s Believe It Or Not panel, apparently being a giveaway to newspapers by the Democratic party. No slouches in getting the word out, a Republican series, “Pictorial Life of Herbert Hoover” by Bob Satterfield had appeared widely throughout the country that year. Comparing the quality of both, and the extreme rarity of the Smith series, I’d say the Republicans won that one hands down, just as they took the big job in November.

You might think, “Lesson Learned!” and the Dems might come back with a better drawn, more compelling series to compete with a G.O.P. rival in 1932 but instead, neither side offered anything.  Since the Republicans were fielding Hoover again, the same, somewhat updated bio might have been used, but, nothing doing. Perhaps both sides regarded the idea of strips as a waste of time.

But that year, the folks at our secondary syndicate, Central Press, which regularly presented short-run strip series on figures in the news,  offered one on the new Democrat contender Franklin Roosevelt drawn by A. J. Buescher, who did the Central Press regular illustrated Bible series. 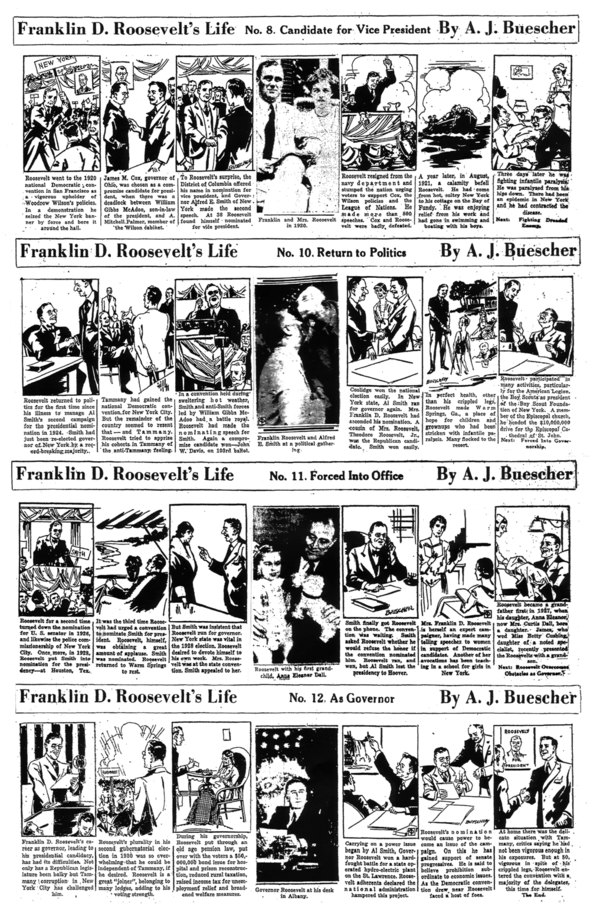 Some strips from the 1932 Central Press series about Democrat candidate
Franklin D. Roosevelt by A. J. Buescher. 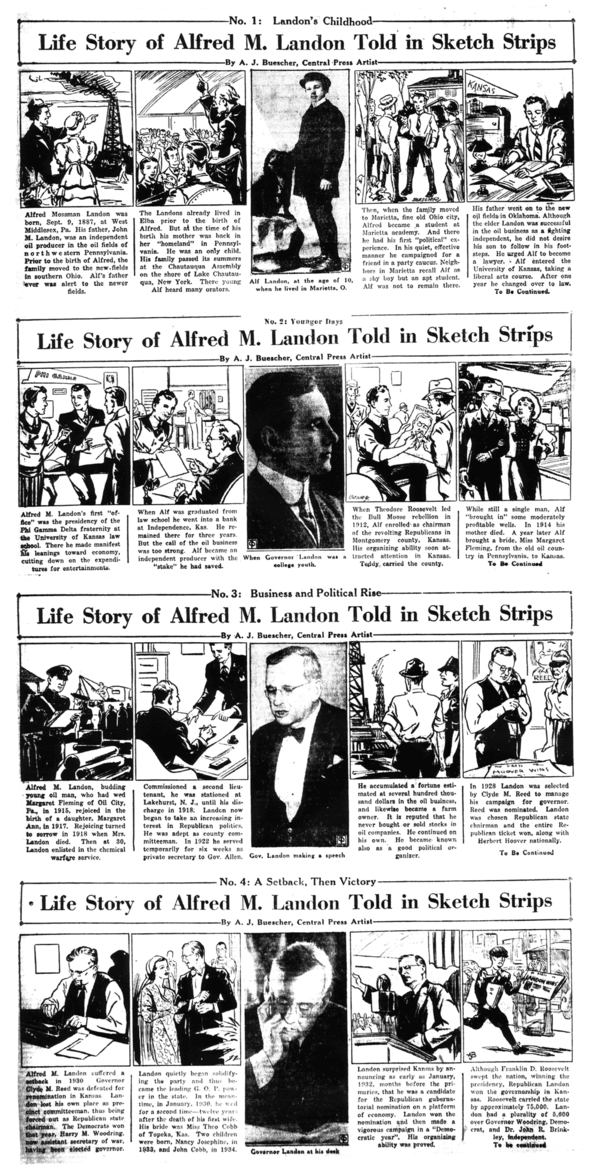 In 1936, he did another on the Republican challenger, the hapless Alf Landon, governor of Kansas. 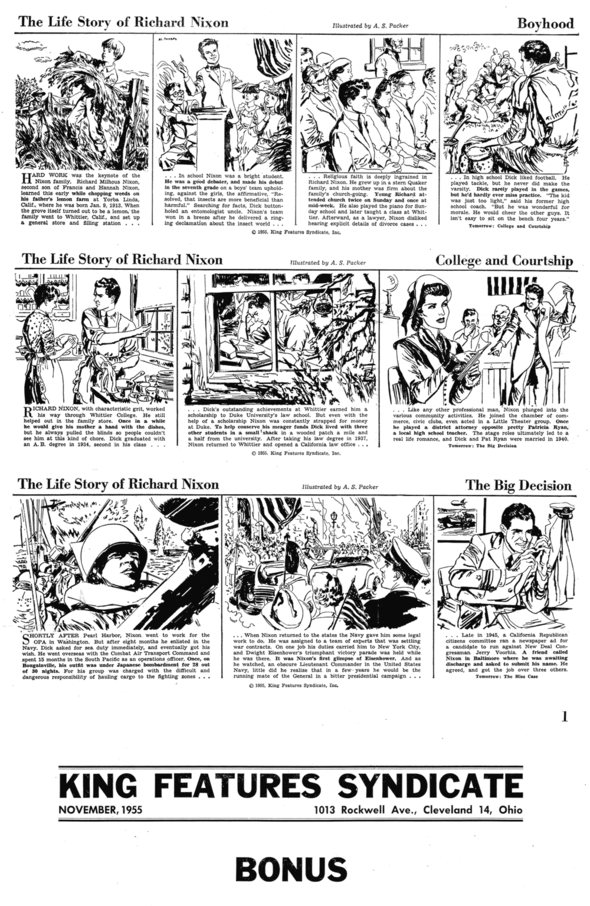 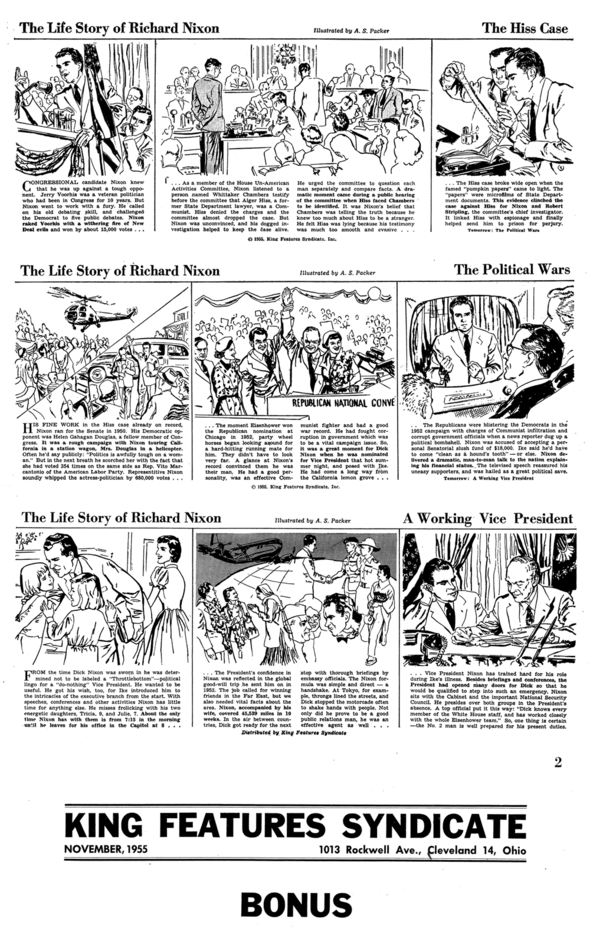 In September 1955, President Dwight Eisenhower had suffered a serious heart attack, and many worried if he could die in office, putting his young Vice-President Richard Nixon in the top position. That didn’t happen, but to get ahead of any future events, this series was issued by King Features. I have the actual proofs of this series, so here’s the full set. The artist was A.S. Packer, a reliable illustrator (though given to some pretty hokey posing) of story serials used in the Sunday magazine section. 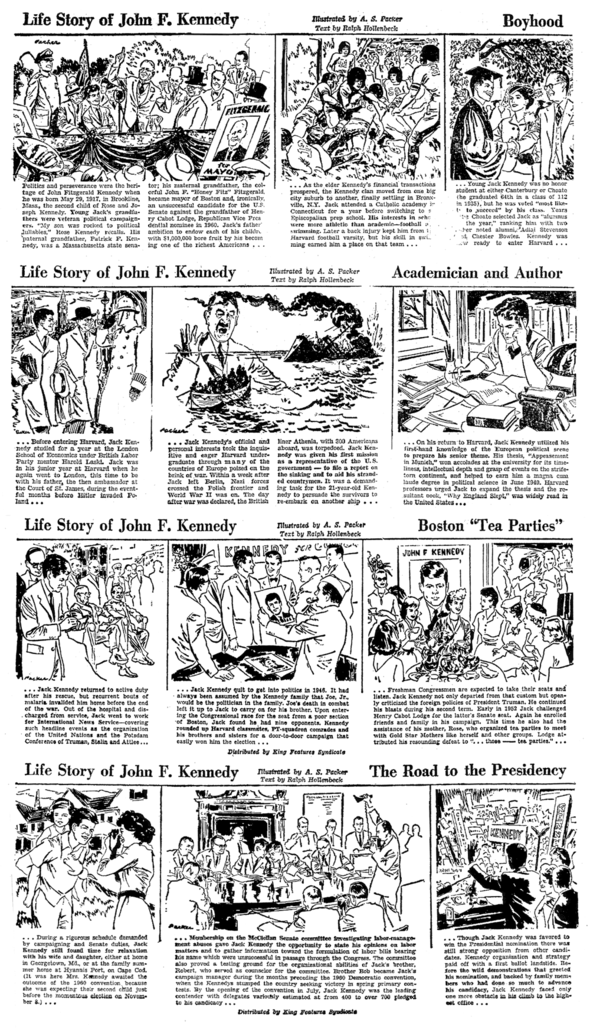 In 1960, a lot of papers still retained the Nixon series, and when he became the GOP nominee, it became very timely again. Naturally, a new series based on the Democratic opponent, John F. Kennedy,
had to be added and it was, also by Packer and made to match in type and style the Nixon set.
Since both were straightforward, they sometimes were shown, one of each, on a page.
Other papers declined to use one set entirely. Are they good propaganda?
They’re mild enough to be noncontroversial as a public service announcement. 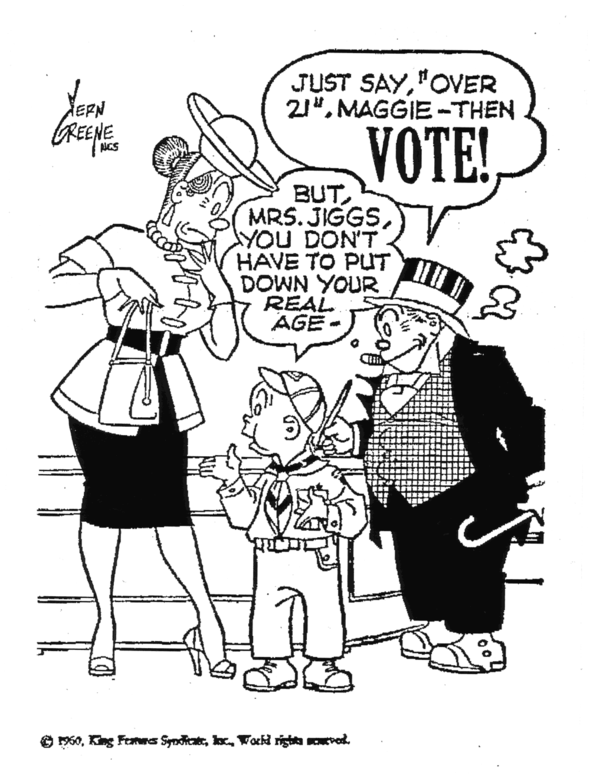 Speaking of PSAs, here’s a parting message from Jiggs and Maggie from 1960.

I don’t have anything like a definitive assortment of these, so there may be others out there, though they never seemed to be really popular, which might explain why they aren’t done any more. Another is the actual “news” value of such a series. In the age of TV and saturation media, there’s just nothing left to know about a candidate that a comic strip might convey.

I realize the story strips are very popular, but there will have to be more gag strips from now on, because there’s just so few continuities left in our files. I understand the devotion to the serials, because many strip fans appreciate a good crime busting adventure or a romantic drama, especially if you have access to a lot of the story at a time. These strips don’t now, and haven’t for a long time been faring well in the newspapers, the old dynamic of the reading audience purchasing a certain paper to see the latest installment of a certain comic does not hold forth any more.

Editors have come to prefer the one-shot gag strips,  assuming that if a reader is taxed to put more than a second’s thought into a comic strip, they won’t look at it, hence, dead, useless space. It’s not worth paying to fill a page with that, so they go for a joke strip. That’s why the genre is dying off.

Sorry- I have Post Cards and buttons, but I have no patches or really know about them. There was a General Patch in WWII and Ella Cinders’ husband was named Patches.

Pirates, Cub Scouts and The Hell’s Angels really like using patches, but I really haven’t much to say about them.

I’m sure the “Iss dot you, Chosef?” character has nothing to do with the Russian dictator. Billy DeBeck was given to inventing catchphrases. Early on, when he was still working for the Keeley syndicate, where he made such gems as “He’s/You’re talkin’ to a stranger” popular. Others he created include “Youse is a Viper!”, “Osky-wow-wow”, “Horsefeathers!” and “Heebie-Jeebies”. With the coming of Snuffy, a whole raft of new ones came about  that we now assume are specimens of authentic backwoods parlance like “Bust Mah Britches” and “Bodacious”.

DeBeck created so many of these that actually found their way into everyday American vernacular that he probably thought he could throw anything out there and it would be just as good, but sometimes they seem pretty forced, such as this one. It springs from out of the blue, apropos of nothing at all. He sticks it in along the edges of the daily strip for about a week in May 1942 and in one Sunday about a month later. He didn’t even bother to have his characters use the phrase.

It sort of reminds me of Jack Pearl’s one and only, now forgotten contribution to popular culture, his catchphrase after (as his radio/film persona “Baron Munchausen”) telling a fantastic story to a skeptical listener; “Vas You dere, Sharlie?”. Maybe that was some thin inspiration here, but Pearl’s heyday was about ten years before these strips.

As DeBeck died in November 1942, this might be his last effort as phrasemaker.

Guess I was wrong-Peanut Butter and Ham seems to be a real crowd pleasing combination, if an internet search is any indication. Your old archivist has few aspirations to epicurean sophistication. Plain spaghetti is a taste treat for me. Even more so if it’s cooked.