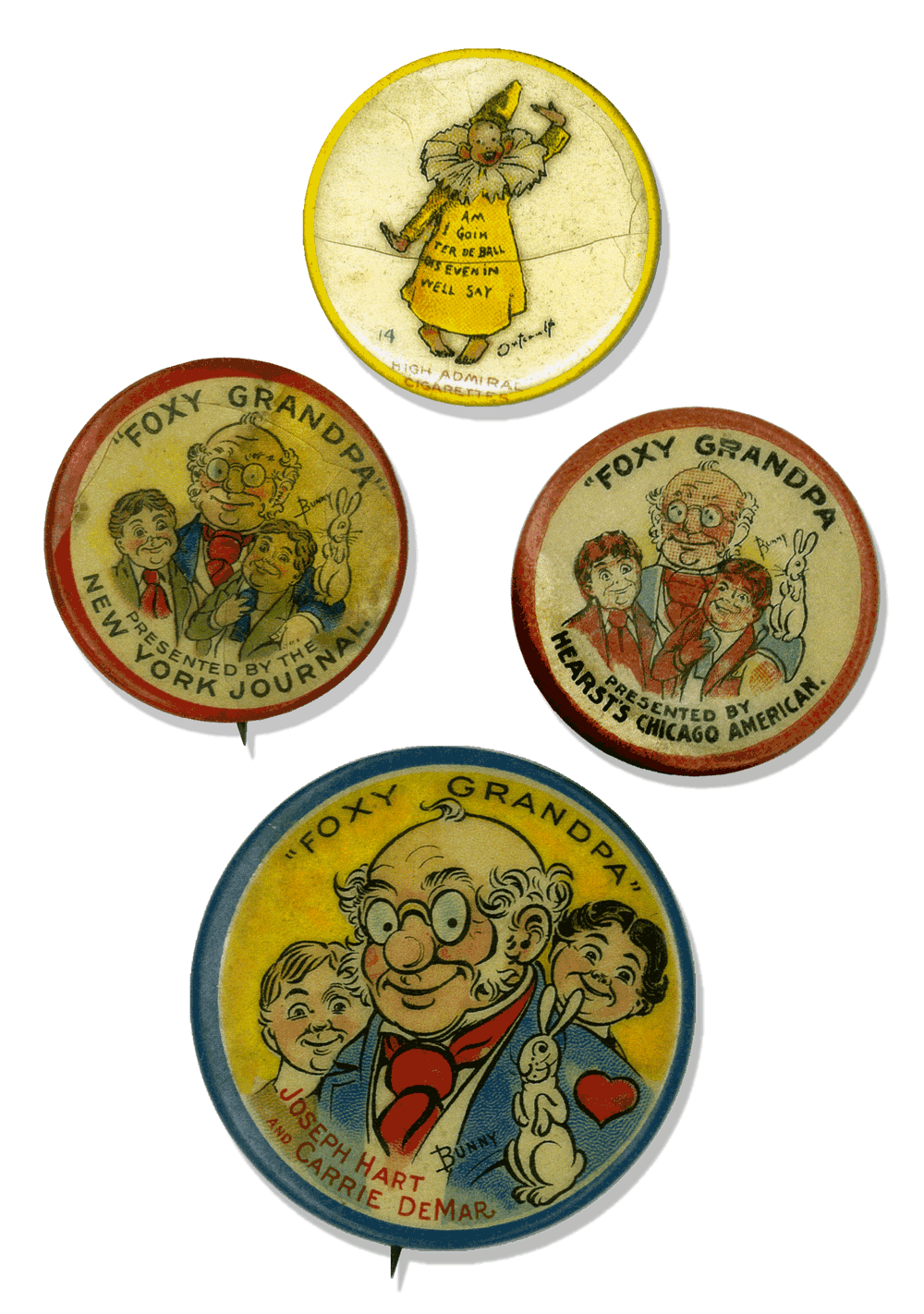 Today we’ll look at the once-popular phenomenon of buttons put out in the service of advertising. Which I would guess was considered something mainly for kids, though there were a considerable amount put out by cigarette manufacturers. Nobody had a problem with that in the early twentieth century. The newspaper examples were designed to start interest in the funny pages. There were of course, more serious subjects that were on advertising buttons, but it’s hard to imagine these would be worn by adults.   (All the examples shown here are at 170%). 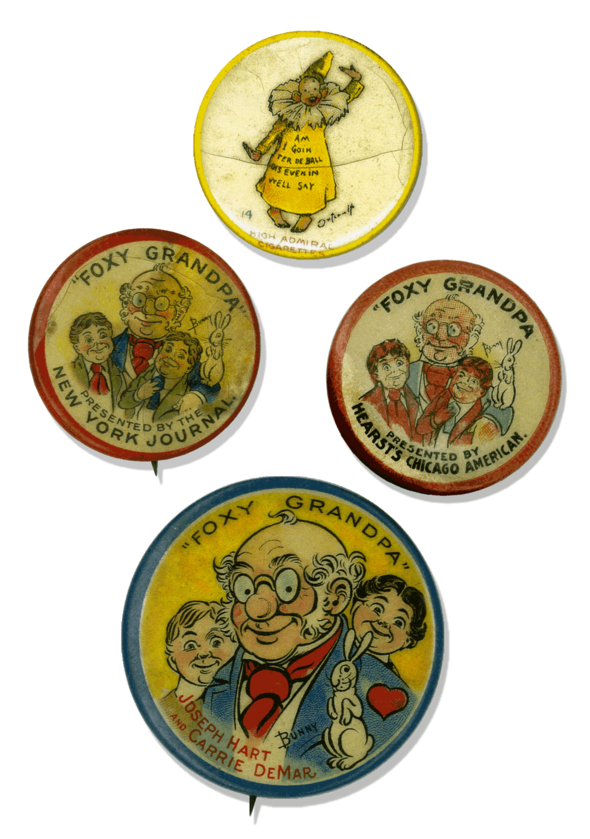 Pinback buttons were a new novelty in the 1890s, most famously the time when the first election buttons appeared. R. F. Outcault’s Yellow Kid was the first comics superstar, as well as a marketing bonanza. In this button, one of a series, the Kid pitches for the long ago “High Admiral Cigarettes” brand in 1898.
Foxy Grandpa was also an early licensing hit. The large button was a premium for the stage show
based on the strip when it was a New York Herald syndicate feature beginning in 1900.
The two others mark the occasion when it came to Hearst papers in February 1902. 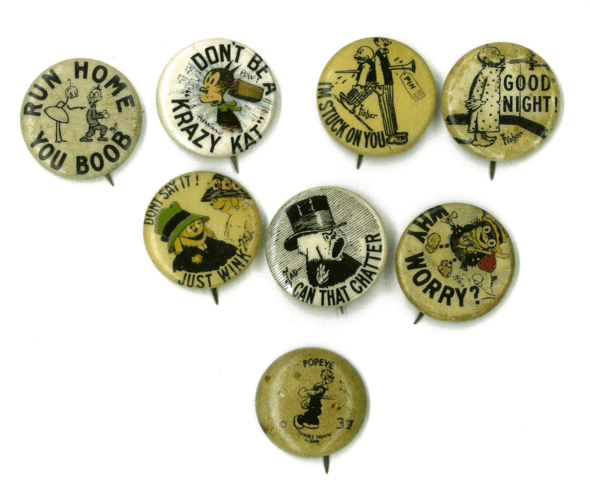 Cigarette pins, circa. 1914. The funny phrases must have been considered witty in those days.
Left to right: Joys and Glooms by T. E. Powers (Hassan Cigarettes), Krazy Kat by George Herriman (Generic, blank paperback), Mutt and Jeff by Bud Fisher (Hassan Cigarettes), Jeff of Mutt and Jeff by
Bud Fisher (Sweet Caporals), Judge Rummy by T.A. Dorgan (Hassan Cigarettes), Silk Hat Harry by
T.A. Dorgan (Tokio Cigarettes), The Weatherbird by H. B. Martin (unknown), and extra bonus: a Popeye example from the “Western Theatre Premium” series. These were giveaways to entice
kids into movie theatres. They pictured both comic strip and animation stars, and though
Popeye would be both at this time, (1931) he had yet to make it to the silver screen. 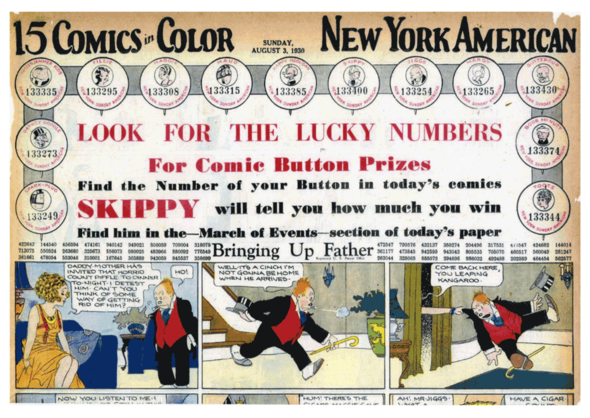 In 1930, several of the Hearst papers tried a lucky number contest with the King Features characters.
The comics pages, in both the daily and Sunday paper, would be awash in lucky numbers that
might match up with those printed on a button, which would be a prize winner.
Here, a detail of the cover of the N.Y. American’s comic section of 3 August 1930
shows the first series. Years later, we would do a similar contest with cards. See:  http://comicskingdom.com/blog/2015/07/23/ask-the-archivist-play-safe 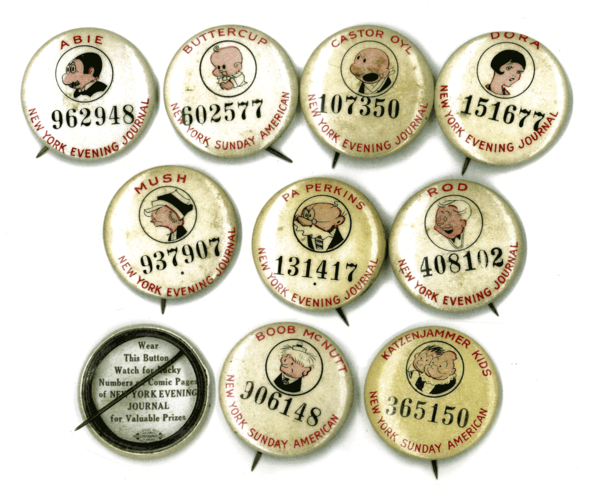 Some of the buttons from the New York Sunday American and Evening Journal series in 1930:
Abie by Harry Hershfield, Buttercup of Toots and Casper by Jimmy Murphy, Castor Oyl of
Thimble Theatre by Segar, Dora of Dumb Dora by Chic Young, Mush from Just Kids by Ad Carter,
Pa Perkins from Polly And her Pals by Cliff Sterrett, Rod from Dumb Dora by Chic Young,
what the back looks like, Boob McNutt by Rube Goldberg and
The Katzenjammer Kids by Harold Knerr. 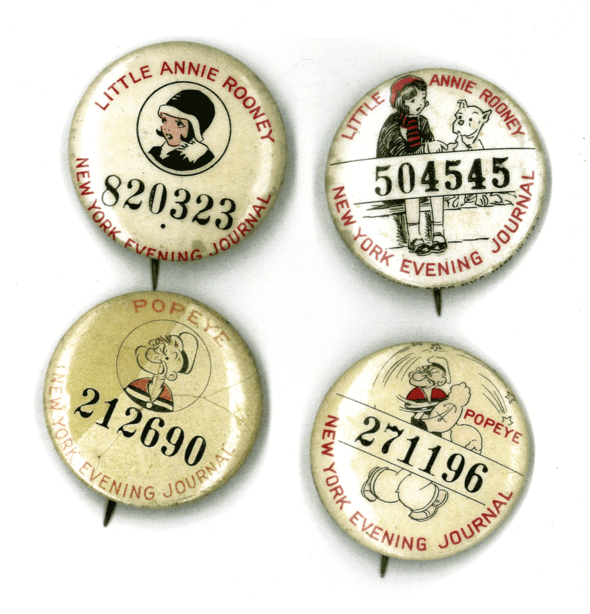 A second series features the characters in full figure. Here’s the comparative Little Annie Rooney by Brandon Walsh and Popeye by E.C. Segar looked. I don’t know what the prizes were.
I believe they were small amounts of cash. 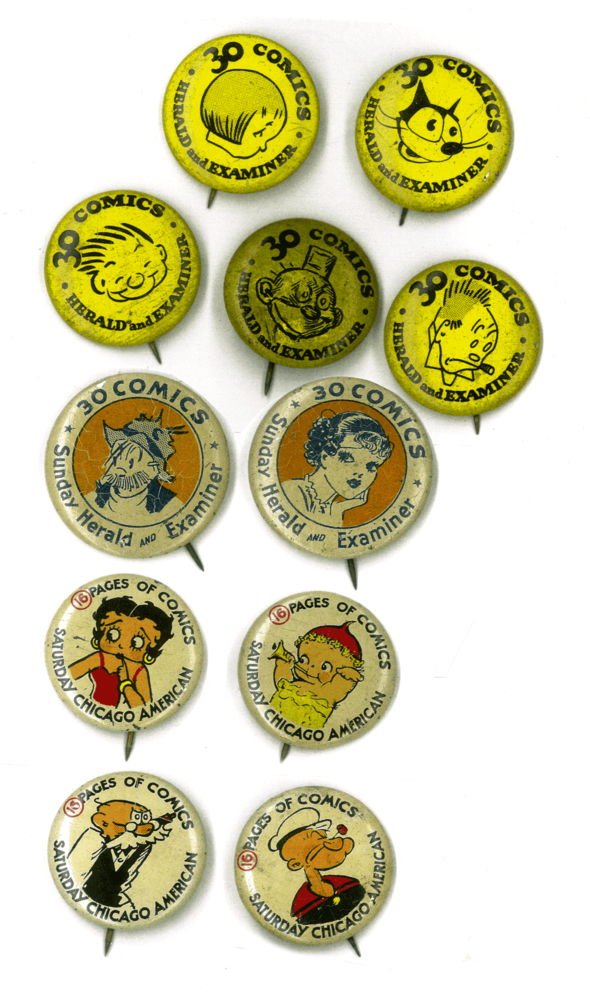 Chicago buttons. These were straight advertisements rather than a contest. Left to Right: From circa 1931, for the Sunday Herald and Examiner, Bobby Bounce of Dolly Dimples and Bobby Bounce by Grace Drayton, Felix by Pat Sullivan, Fritz from the Katzenjammer Kids, Happy Hooligan by Fred Opper, Jiggs of Bringing Up Father by George McManus. From 1935, Pete The Tramp by C.D. Russell, and Tillie the Toiler by Russ Westover. For the Chicago American’s Saturday section in 1935, Betty Boop by Max Fleischer, Kewpie from The Kewpies by Rose O’Neill, Pa Perkins from Polly and her Pals and Popeye by E.C. Segar. 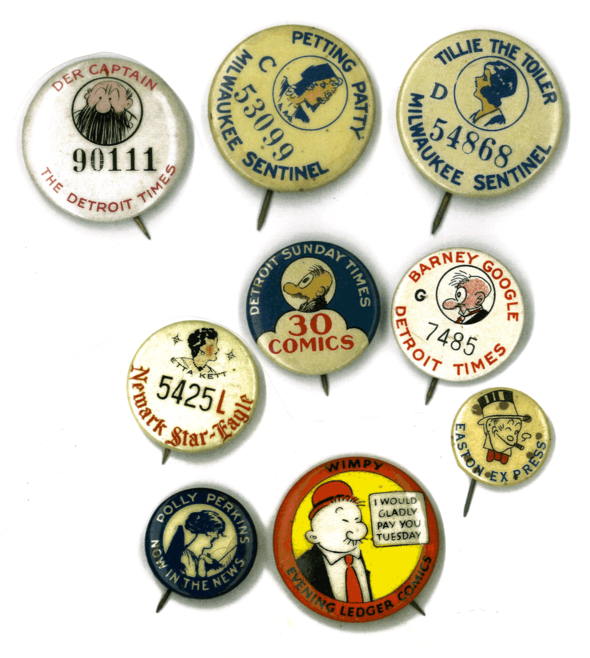 Other city’s Hearst papers had the contest buttons as well, such as The Atlanta Georgian, The Detroit Times Milwaukee Sentinel and San Francisco Examiner, all these being scarcer than the New York versions. Here’s Der Captain from The Katzenjammer Kids by Harold Knerr, Petting Patty by Jefferson Machamer, Tillie the Toiler by Russ Westover, and Barney Google by Billy DeBeck in both a contest and a straight ad button for the Detroit Times comic section.
Not just Hearst papers used comic buttons for promotions. Here the Newark (NJ) Star-Ledger had a lucky number contest of their own, here showing Etta Kett by Paul Robinson . The Polly Perkins of Polly and Her Pals by Cliff Sterrett button is very old, from the 1910s. I have no idea where “The News” was, possibly somewhere in upstate New York. The Philadelphia Evening Public Ledger in 1935 put out an elaborate, multicolor series of buttons that are highly collectible now. Here’s Wimpy of Thimble Theatre by E. C. Segar. And last, an unusual Jiggs of Bringing Up Father by George McManus appears on a 1920s pin for the Easton (Penna.) Express. This same button promotion can be found with many other papers’ names. Newspaper comics promo pins are harder to come by after the 1930s; I guess it wasn’t cost effective.

Buttons were everywhere once, common enough that they might have been considered throwaway rubbish, but somehow many survive to this day, the subjects on them forming some sentimental bond with their owners leaving them unimportant, but just too good to be thrown out. Now, there’s a thriving hobby of collecting pins of all types.

And now, last but not least, it’s off to the Mail Bag.

Perhaps the vintage section can have the early Sunday Hi and Lois strips added. It’s surprising that so many good series that we could offer just haven’t made the cut yet.

No relation to Dudley Fisher, are you? We have files of the daily Right Around Home that last from 1941 to 1953, the Sundays from 1941 to 1965. So there’s another ripe candidate for our vintage site. As for Helgas and Loweezies everywhere,  my apologies. Who needs Hillbilly Vikings after them?

Very generous of you to do Myrtle’s homework- but you know if she doesn’t do it, she’s only cheating herself. If she doesn’t learn anything she’ll wind up as dumb as the adults surrounding her.

Nice to hear from the Zipster’s creator.

My opinion is that though Fisher was a fine artist, his humor, especially in the Sunday, was maddeningly  repetitious.  It’s year after year of the same small-talk-at-one-moment tableau. It lives up to its stated objective, it is definitely right around home, but it’s one of those things that is stuck in its own time, not something that you can read a stack of at one sitting and keep the same interest. It’s made to be read once a week.

Another thing about Myrtle was, though seen in prominent papers outside of Puck sections, (for instance, the Philadelphia Inquirer carried it until it ended), it was never a major strip. Myrtle didn’t have a comic book, and licensing efforts were barely made–only some greeting cards as far as I can tell.

But Right Around Home’s Sundays were popular enough to inspire some advertising in faux-Fisher style. I recall one for Aunt Jemima pancakes and another for Swift’s Premium ham. In that one, a family gathered around the big meal making banal chitchat. One of the (serious) suggestions offered within was spreading peanut butter on the ham to enhance the flavor. Yum!