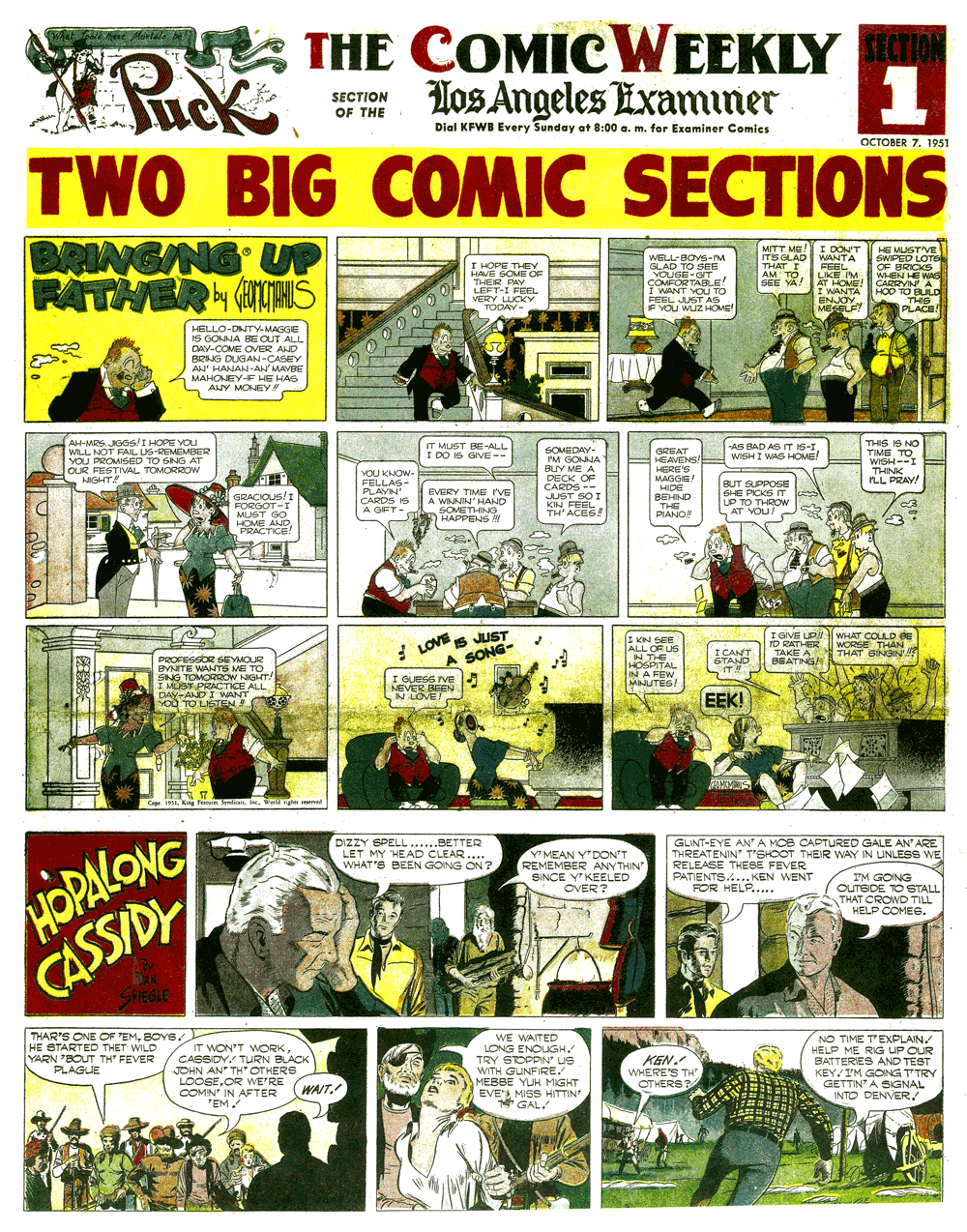 In our final salute to the legendary Hearst newspapers’ comics section, PUCK-THE COMIC WEEKLY, we take a peek at the last days. 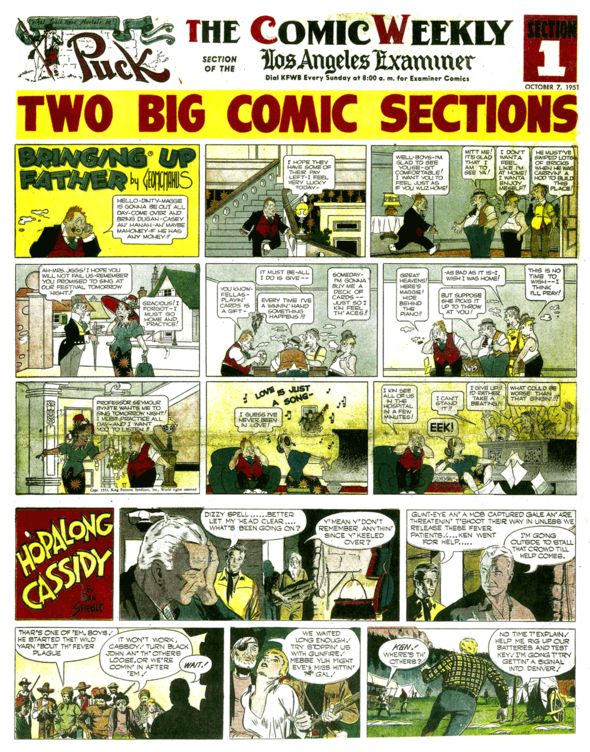 Starting in 1949, the section was divided in two. There were more comics, and more advertisements, too. “Snookums” was moved off the cover, oft times dumped altogether to make more ad space. The days of the top comic were over. Though Puck was supposed to only carry KFS material, several strips that were not Hearst properties but distributed by us were regularly featured. One was the “Hopalong Cassidy” strip, here proudly used on the cover. (7 October 1951) 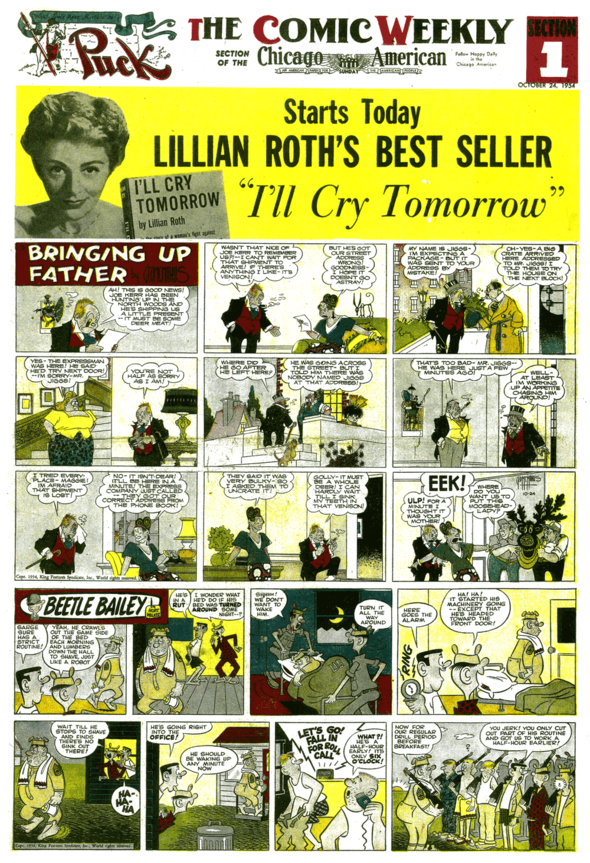 In 1952, hot new strip “Beetle Bailey” took the second position on the cover. (24 October 1954).
The space above “Bringing Up Father” became an ad for one of that week’s offerings
in the rest of the paper, giving it display value at the newsstand. In this case,
onetime torch singer Lillian Roth’s tearful bestselling autobiography is serialized. 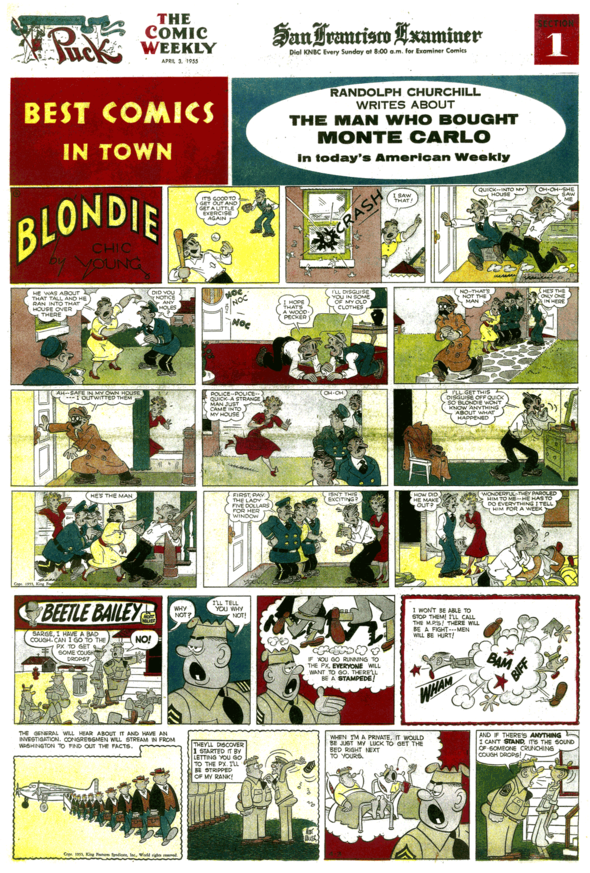 When George McManus passed away in 1954, his backlog ran out in December. In early 1955, “Blondie,” which had occupied the cover of the second section, was upgraded to that of the first, completing the “face” of Puck until its demise. (3 April 1955) 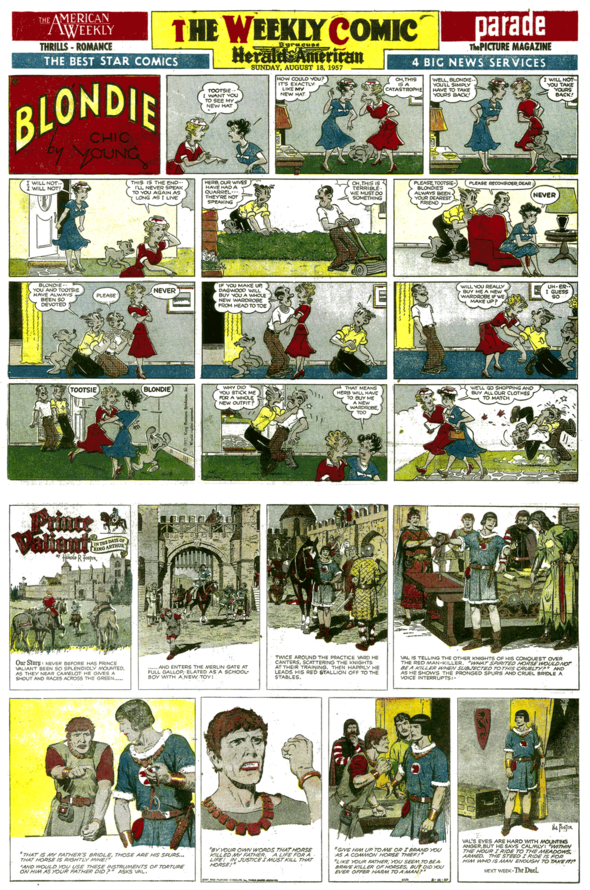 Here’s a real anomaly. In this 23 August 1957 section of the Syracuse Herald American, they have dumped the Puck logo and switched “The Comic Weekly’s.” Also, “Prince Valiant,” mercilessly shrunk and poorly printed, has replaced “Beetle.” I have other Pucks of this date, and I guess that they were running non-Hearst strips. That they are putting out our rival Field Enterprises’ Parade supplement indicates this. The Herald American must have been a very independent member of the chain. 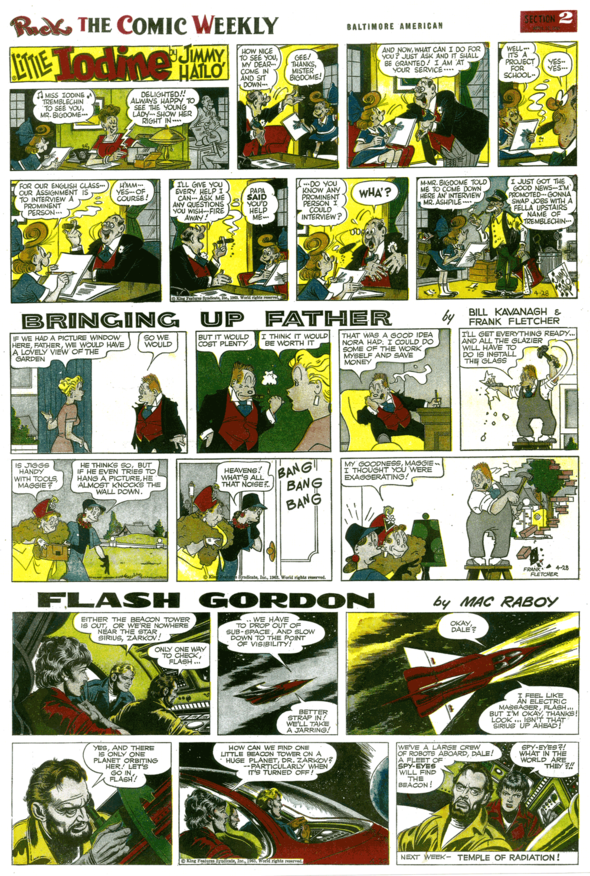 The second section had “Blondie” switch places with Jiggs in 1955. By this point, (28 April 1963)
the now 1/3 page “Bringing Up Father” joined the equally truncated “Little Iodine” and
“Flash Gordon,” but ads could just as easily knock out the low man space. 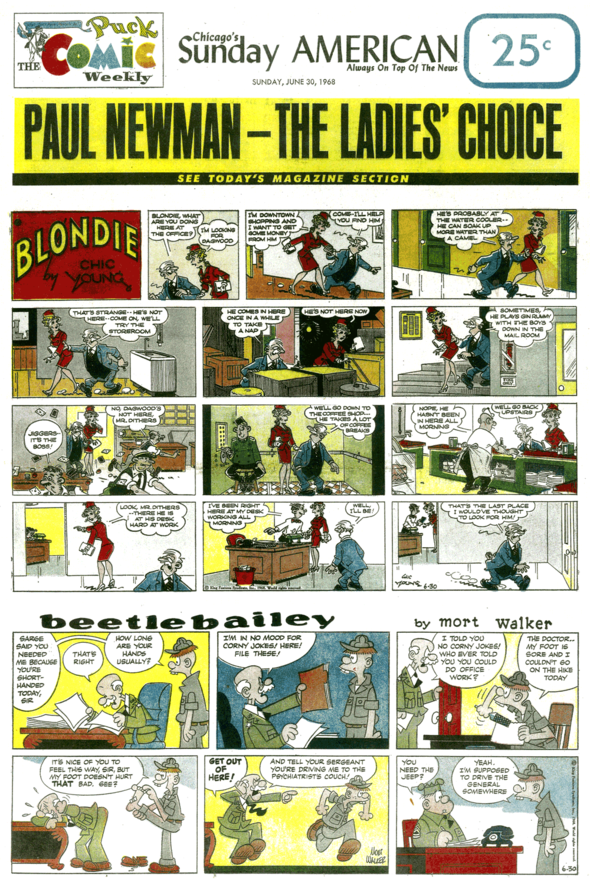 This is the last time the Puck logo was seen in the Chicago American. (30 June 1968). Without fanfare
it vanished. Other papers held on to it longer—I seem to recall the Albany Times-Union
holding on to it into the mid 1970s. The San Antonio Light carried it until 1977. 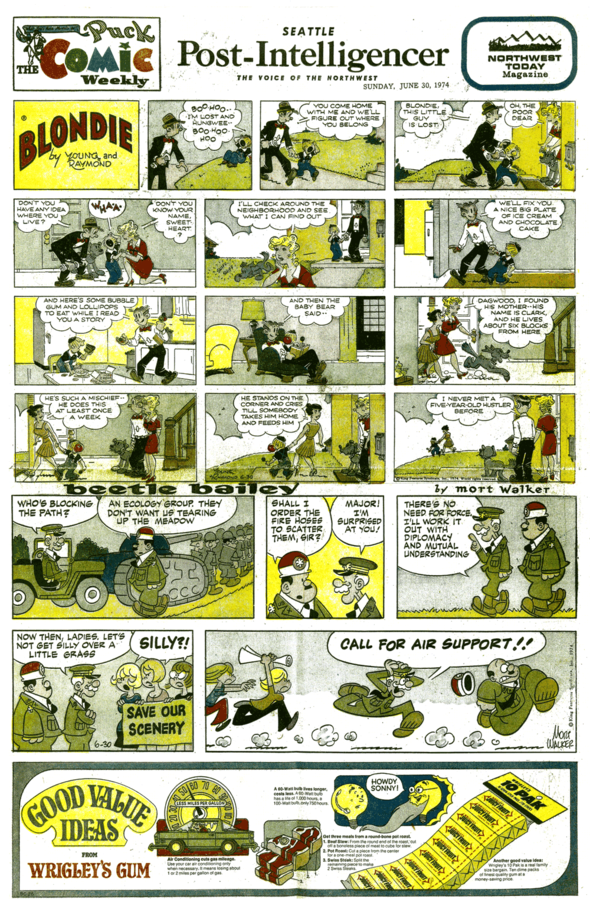 This is what the final configuration of Puck looked like—the ads have finally breached the cover itself. (30 June 1974) There’s no need to make them strips any more either, they’ve become made-for-comics-section ads of themselves. If you were reading comics sections in the 1970s, you’ll recall that just about every one in the United States and Canada by then had a one long panel Wrigley’s ad at the base of the cover, Hearst or not. Also, Hearst papers wanted to use desirable non-Hearst content. There was nothing special about the Puck section any more. All comic sections had followed our lead
and consequently, all became equally as useful for ad space.

And now, on to our Mail Bag!

To Robert-
The Puck section was seen in the Hearst papers around the country, but as they were centered in the largest cities, the same titles would stand to be a second paper to everywhere else in a region as well, as I had mentioned last week with the Boston Sunday Advertiser. I lived in New Hampshire, and the Advertiser was a part of everyone’s weekly reading. Sometimes two papers would overlap each other’s ostensive wider territories, like the Chicago American and the Milwaukee Sentinel, or the Washington Times and the Baltimore American, but usually one paper would be sought for several states around.
To Rodrigo Araya-
The Grape-Nuts Flakes version of Jerry on The Job was in a daily format, as far as I’ve ever seen. Actually, there was a short-lived straight revival of Jerry in 1949 by Bob Naylor. Probably only so we could keep the possibly valuable trademark value going for a while. It never did make a comeback afterward.  Another title that returned after its soul was sold to Madison Avenue was Joys and Glooms, who were created by T.E. Powers about 1908, and even had their own animated series in 1916. Powers used them off and on into the 1920s, but they returned in 1937 to stump for Postum, drawn by (it looks like to me) Bil Dwyer. Mostly non-King Features characters did a series of circa 1939-40 Kellogg’s All-Bran strips that appeared not in comic sections but magazines like Life and Saturday Evening Post, and they were in fact current series like Mutt & Jeff, Lil’ Abner, Captain & the Kids, Toonerville folks, Abbie & Slats, the Mountain Boys, Betty,and one defunct Hearst series, Alphonse and Gaston. Drawn by whom  I have no idea. All these characters like All Bran because they all needed a  gentle laxative. And who doesn’t from time to time?
One in this genre of note was Doings Of The Duffs, an early series about a family drawn by the underappreciated Walter Allman for NEA. It ran from 1914 until a few months before his untimely death in 1924. The series standout character was fat, wide-eyed Olivia Dale,  a country cousin that lived with the Duffs. The gags were basically family stuff, real-life incidents. In 1928, the United Feature syndicate was building, and took on a revival of the strip with an unknown named W.O. Fitzgerald drew it for a few months in 1925, then Ben Batsford took it over,  did badly with it, then Buford Tune did it from 1928 to 1931. It was an exhausted feature. Then, Batsford bought the rights to it from Allman’s widow, figuring he was going to do big things with it while the strip was still remembered. But the only thing that ever came of it was one ad comic for Royal gelatin pudding in April, 1933.
To bobm
The American was the Chicago Hearst paper on Sunday, though the Tribune was still a very worthy paper to read.  After the Hearst morning paper, the Herald and Examiner, folded in 1937, the heretofore evening-only Chicago American had only put out a Saturday comic section. They then took over the Sunday editions as well. Sometime in the 1950s they started calling themselves “Chicago’s American”.  Don’t know why. There was no confusion about the city’s nationality to me, anyway.