Someone once said “there are no stupid questions,” but they didn’t take comics into consideration!  Cartoonists have heard them– and often written them– all!

This week, I asked our cartoonists to share their favorite stupid questions. 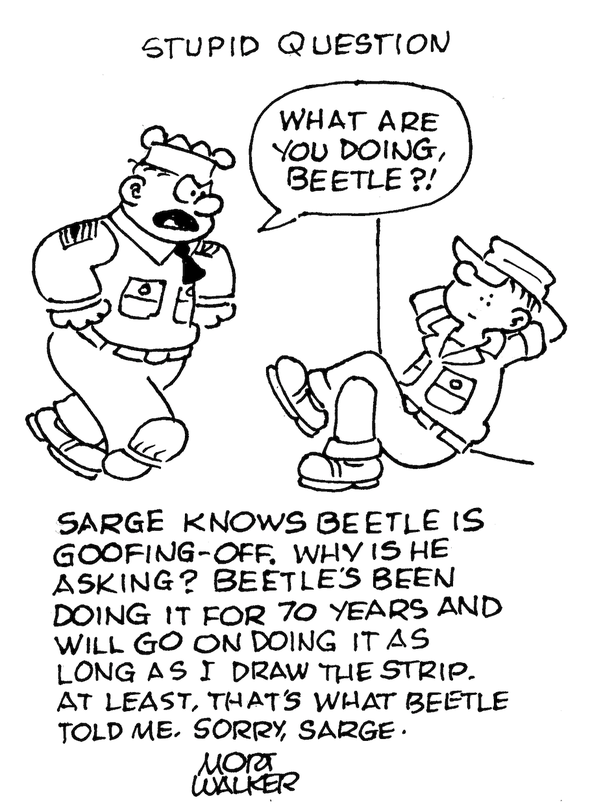 “Do eels shut off for Earth Hour?” Who says there are no stupid questions? You can always rely on Monica to provide you with some… (or lots). Sometimes when I have writer’s block, I rely on things like stupid questions to give me a spark. Thanks, Monica!”

Sorry, Zippy never asks stupid questions. He leaves that to Presidential Debate moderators.
But he often asks deep, probing, Existential Questions, as in this strip…

By now the Parson ought to know anytime he asks Jughaid Smith a question, he’s going to get a silly answer! After all, Jughaid’s just like his Uncle Snuffy!

My favorite stupid question was asked of me at a comic book convention a few years ago. Before I drew comic strips exclusively, I spent three decades drawing comic books, and had quite a back stock of issues I had worked on. When I’d make a convention appearance, I’d display many of the comic book titles I’d contributed to at my “artist’s alley” table. At one show, a fellow stopped at my spot, looked carefully at my comics, furrowed his brow, and asked me in all sincerity, “Are these ANTIQUES?”

The stupid questions that annoy me are the ones that must get asked in the misleading “studies” that get published in the media.

This is , of course, the perennial question a parent asks their child at bedtime. So we really can’t blame Dennis’ poor ol’ dad for following a time-honored tradition.