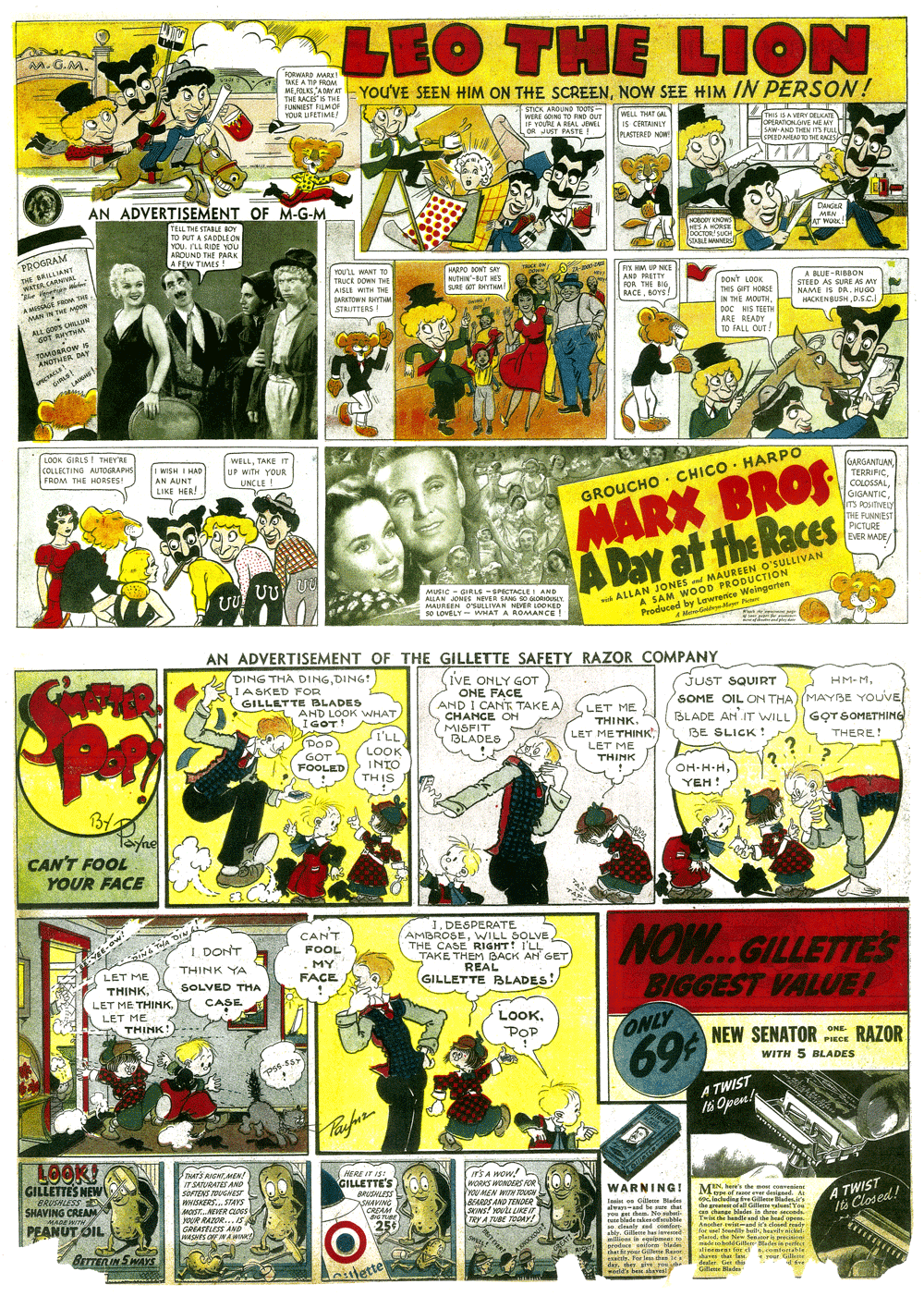 Our second look at the Hearst comics section, PUCK-THE COMIC WEEKLY, starts with more impressions from the 1930s and 1940s. 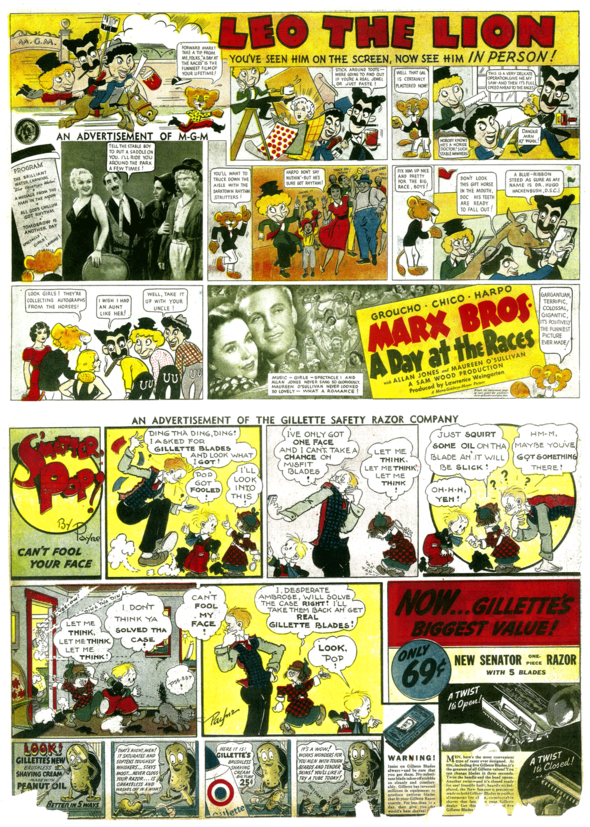 AD COMICS: Above-Even individual movies could be sold via the Funnies. (27 June 1937)
Below-Sometimes cartoonists would be able use their old, retired comics stars in ads, like we see here, old timer C. M. Payne revives the cast of “S’Matter Pop?” for a Gillette spot. (10 July 1938).
Who drew it? Just a guess- Mal Eaton. 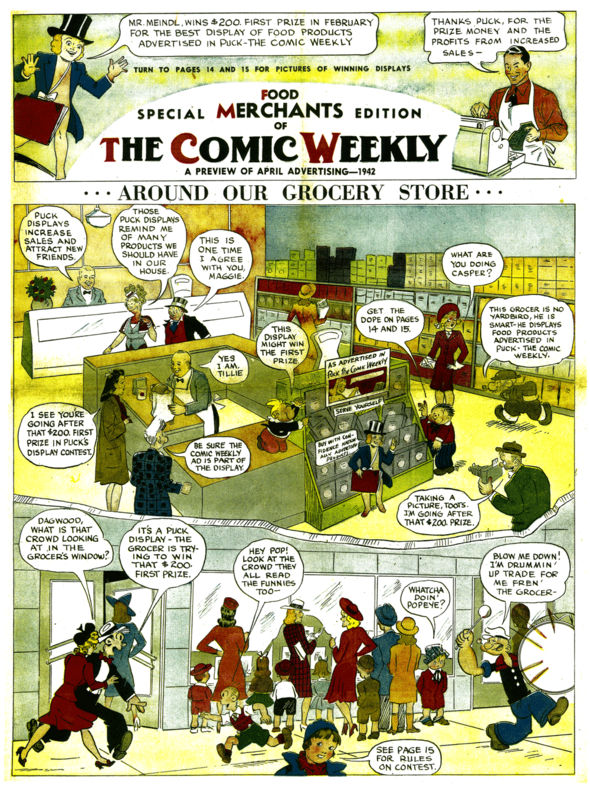 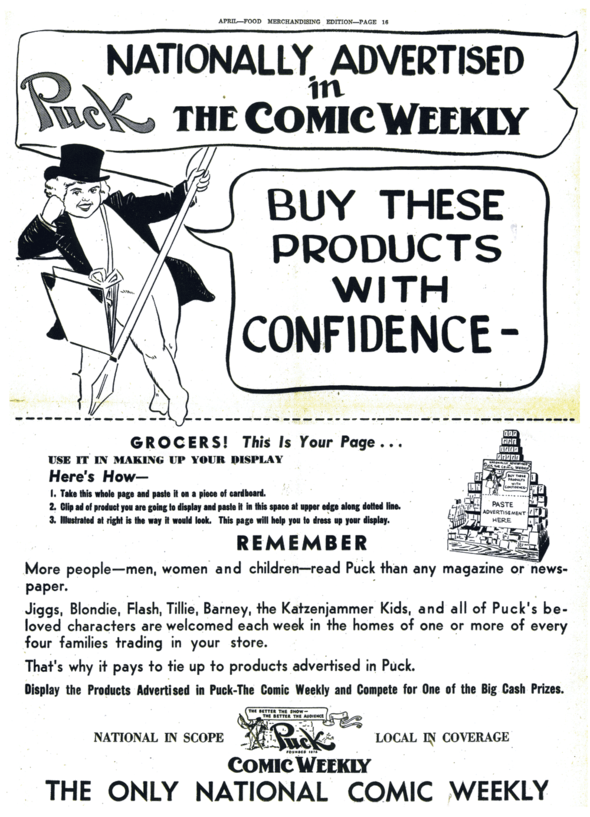 Here’s a really rare item—a special Puck comics section of April, 1942 that pitches itself to local grocers as a method of in-store promotion, holding up specific pages with the real comics and ad comic relating to the products on offer. This is as big as a Puck section, obviously printed on the same press at a Hearst paper, likely the New York Journal-American. I don’t know much more about this.
I guess it was sent like junk mail to grocers and markets. I don’t know how long they did this either. Shown: Front and back. Artist unknown. 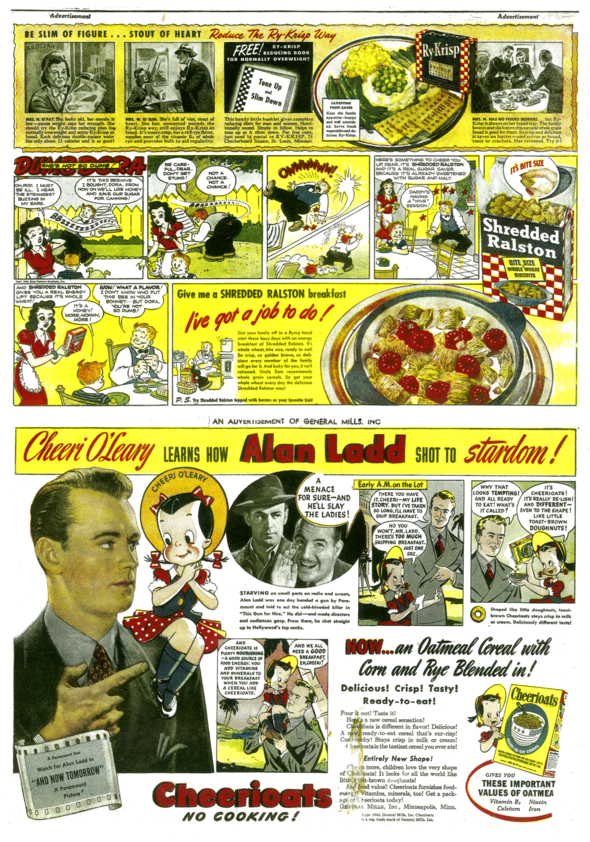 AD COMICS: Above—Here Paul Fung revives “Dumb Dora” for Ralston Purina. (20 June 1943) Below—Cheeri O’Leary pitched Cheerios in the days when they were called Cheerioats. (The courts ruled that “Oats” couldn’t be part of a trademark). Notice how the concept of a comic strip disintegrates into a free-for-all because it’s selling a movie, movie star and a cereal. (14 May 1944)

It’s often said that the comics got smaller, losing their top comics and shrinking to third page size, because of wartime paper shortages restricting how many pages a section could be. So cutting down the strip size could still insure the same amount of strips. Well, having a good number of Puck sections from before, during and after World War Two, it’s obvious that page counts didn’t decrease, the Funnies got smaller so that more ads could be accommodated.  Notably, the comics never regained their size after the war. 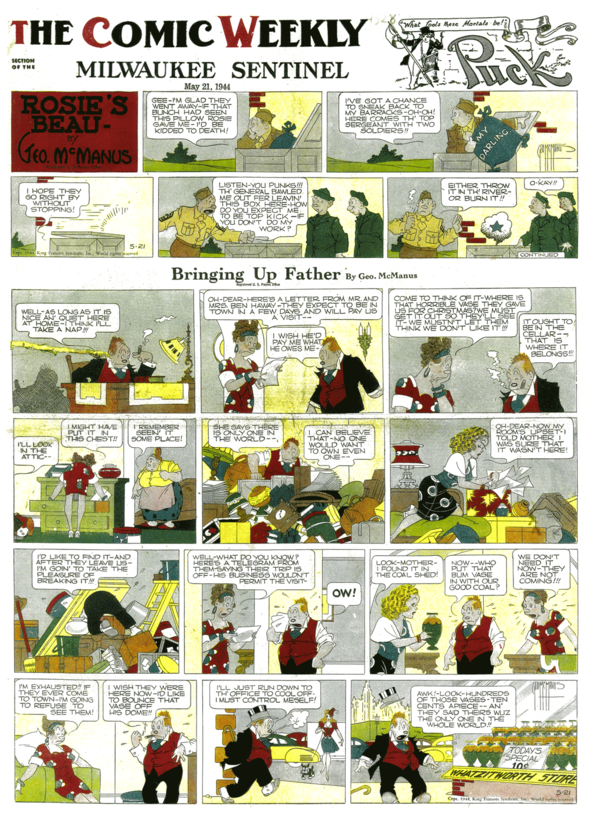 The cover of the Hearst first-string Sunday section carried “Bringing Up Father” from 1918,
through the introduction of Puck, to just after George McManus’s death in 1954. 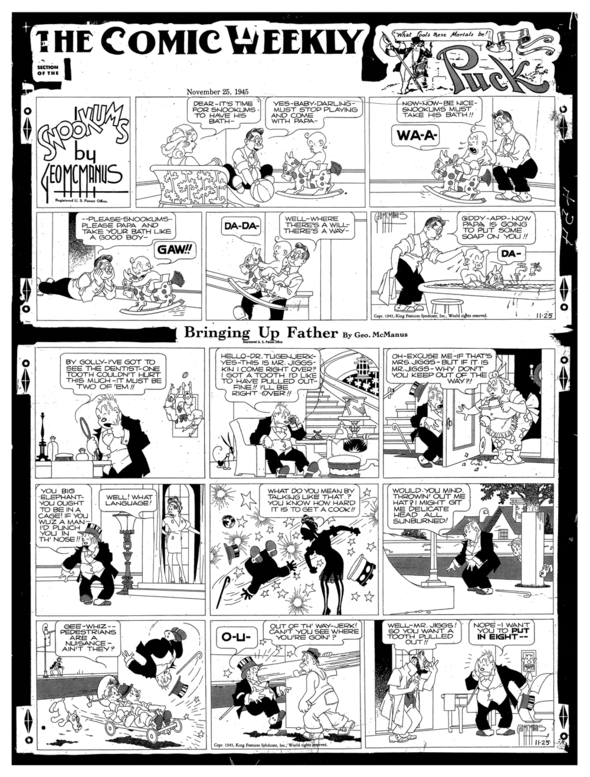 A Puck cover of 1945, showing McManus’s “Snookums” taking the place of “Rosie’s Beau”.
This is seen in the form of a black plate printer’s proof. The T, C and W in The Comic Weekly
are notched off to indicate they will be red instead of black. 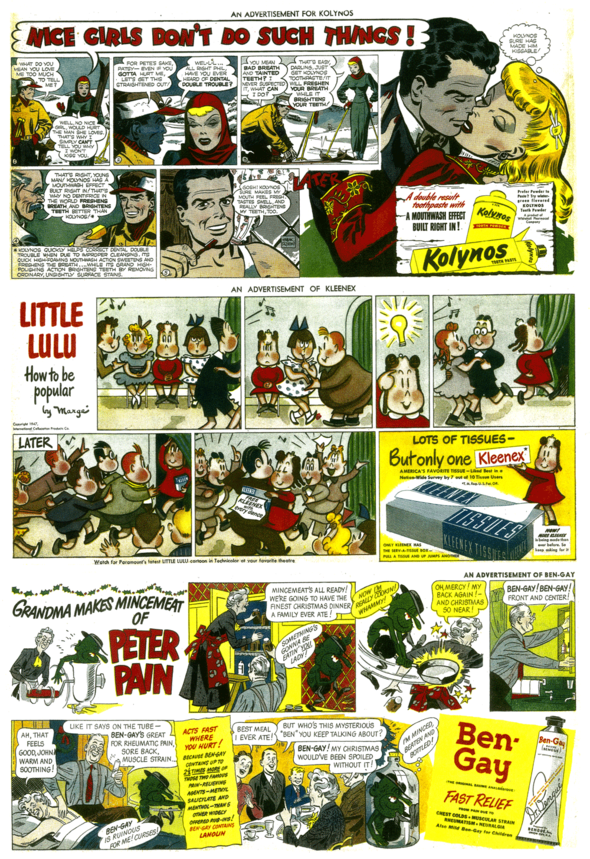 AD COMICS: Top-Frank Robbins takes time out from “Johnny Hazard “ to do a Kolynos ad.
(19 January 1947) Never heard of Kolynos? Is that a Greek Island?
No, it was a major brand tooth paste that has gone on to oblivion. Like Ipana.
Middle- Marge Henderson Buell’s “Little Lulu” was spokesgirl for Kleenex for many years,
(30 March 1947) as well as an animated and (non Hearst) comic strip and book star.
Old timers will recall her longtime billboard presence in Times Square.
Bottom- Peter Pain was vicious, hairy little goblin that viciously attacked people who failed
to use Ben-Gay fast enough. His smart alecky comments might indicate
a future at Marvel comics. (18 December 1949)

Next week, the final phases of the faces of Puck.

Last but not least, it’s off to Our Mailbag.

The length of the run of the Puck section extended from 1931 to about 1975. Some papers dropped the trademark and the concept in the late 1960s, some later. There’s a W@ikipedia entry that says the Los Angeles Examiner had Puck into the 1980s, but I think that’s far too late. I could be wrong. Any left coast fans that can estimate when they dropped Puck?

Yes, the Puck building, now renovated and restored, is today a Manhattan landmark.

I’m surprised that in Maine you couldn’t get the Boston Sunday Advertiser and their Puck section. Though a lot of the same comics could be seen in Hearst client papers like the Portland Sunday Telegram.

Starting in about 1930, it began being a popular Sunday morning radio draw to have a man read the comics section of a specific paper, which would pay for the advertising. Some of these guys became local stars like “Uncle Bob” in Chicago and “Uncle Don” in New York.  Mayor of New York Fiorella LaGuardia’s most famous moment was when he read some of the Sunday News’s strips during a newspaper strike in 1945 for a newsreel stunt.

In the 1940-50s, we syndicated a program called The Comic Weekly Man, where the contents of a Puck section were read , with local inserts supporting the nearby Hearst Sunday paper.

Back in the 1930’s, Milton Caniff had gone from the syndicate fielded by the Associated Press doing several titles, including Dickie Dare, to the Chicago Tribune’s Terry and The Pirates. He was a working artist and illustrator and found a few good ad jobs like the Postum series. (our example last week was from March, 1936). He apparently had to use a nom de plume for work outside his syndicate though.

The” Our Gang” ad was drawn by, if I’m any judge,  Ray Thompson. (most famous for another ad comic series, “Pud” and the Double Bubble gum kids)

Some KFS artists did ads, but not two syndicates at the same time, ads being quite a thing apart from comics, no matter how they’re disguised to resemble them.

More about this in today’s installment about Puck.

In 1906, Puck was still owned by Keppler or his heirs, and Hearst being a contender for the governorship of New York, he was fair game for mockery. Opposing politicians and papers happily opted to use the Hearst comics characters against him. It’s a testament to the genius of William Randolph Hearst that he was closely associated with his famous properties in a way that nobody ever did with Joseph Pulitzer or Colonel Patterson.  As for the date, I might have gotten the wrong section, perhaps. It’s the earliest I have. I see other Puck sections like the Pittsburgh Sun-Telegraph and the Boston Advertiser began 20 September.

It’s hard doing research on Hearst material online because nearly all of the chain’s papers are not available. Most of them are now defunct, although they were the most “popular” in their style.