(To embiggenate these images, click any character in the solar plexus.) 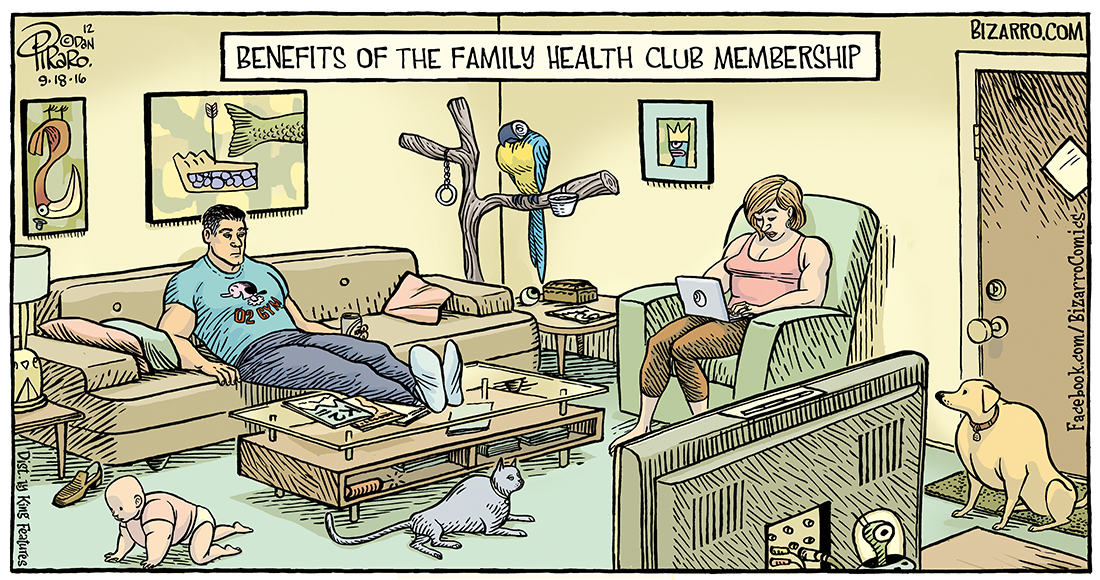 Bizarro is brought to you today by Forgotten Muscle Groups.

This Sunday comic about the family health club membership is worth enlarging, if only to search for the 12 secret symbols. There are 11 official secret symbols (as documented and explained here) but one of them appears in this image twice.

I’m an athletic sort of guy and a big advocate of staying in shape, so for most of my adult life, I’ve been a regular at various gyms, yoga classes, tennis courts, bike routes, etc.  I’m not, however, the type of guy who spends so much time at a gym that my body is swollen and bulging in unnatural places as though I’ve been attacked by a swarm of bees. I have too many more important things to do to spend that much time lifting heavy things. As I write this, I realize how “judgy” it sounds; as though people who are big and bumpy from copious weight lifting are somehow inferior to me. I apologize for that and do not wish to inspire stronger people than I to assault me. I don’t know any more about the secret workings of the universe than you do, so for all I know lifting heavy things while staring at yourself in a mirror is more important than drawing silly pictures. We all have our own path. 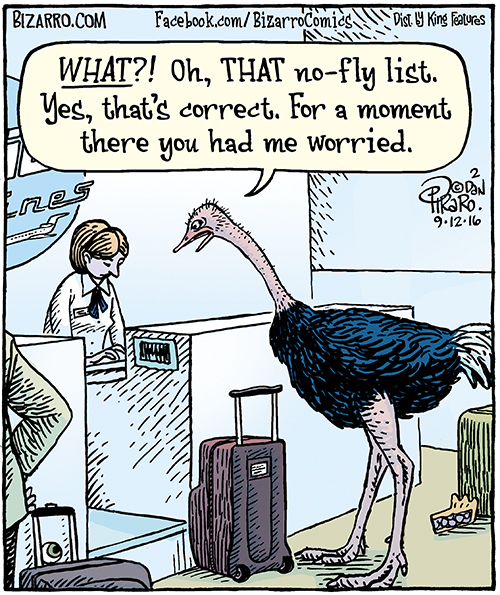 This ostrich cartoon coincidentally appeared in newspapers the day after 9/11. I say it was a coincidence because it didn’t cross my mind when I drew it, dated it, and submitted it for publication several weeks previous. I often don’t notice the dates I’m slapping on cartoons each week––I just write seven cartoons, draw them, color them, look up the next seven dates I’m supposed to provide to King Features, write them in under the signature and submit them. I usually will notice a major holiday like Christmas or Halloween, but other holidays or anniversaries that I’m not looking to address in my cartoons just slide by without notice. So I thought it was a bit odd when I noticed the proximity of this one to the anniversary, considering 9/11 is the reason there exists a “no fly list” in the first place. If I’d noticed that when I was dating this batch of cartoons, I likely would have bumped it to the end of the week so as not to draw unintentional parallels in reader’s minds. Whatever. As you most certainly have noticed by now, I don’t have anything interesting to say about this cartoon. Let’s see if we have any more luck with the next one.

OMG, have you ever been around a surgeon who holds his hands this way all the time so you’ll ask, “Why are you holding your hands that way?” and then he says arrogantly, “I’m an important surgeon,” as though some surgeons are totally UNimportant? No, neither have I. No one has. It’s stupid.  But we all know insecure nitwits who find ways to organically drop information into conversations so that you’ll be amazed, and then they act like it’s no big deal and pretend they’re a little embarrassed that you’re making a fuss when that was obviously their intention all along. I’ve known several people like that and it is such a challenge not to slap them in the face with the hand I used to spread sunscreen on Sophia Loren on the French Riviera that time I was the guest of the Prince of Monaco because he liked my cartoons so much.

My good email buddy, Michael Roth of someplace in Germany, suggested this subtle cartoon about Chewbacca, which I really like. He’s a writer of some sort which impresses me because that means he’s even better at German than he is at English, which is pretty much flawless. I’m jealous of bilingual folks because I’ve always wanted to speak another language but have found that it is difficult to learn so many new gibberish sounds that supposedly mean things and then use them in exactly the right order so that you don’t sound like an idiot. So far, this skill has eluded me. I’ve been taking Spanish lessons online for a few months now because Olive Oyl and I have bought a house in Mexico and are moving there full time soon. I’m starting to get the hang of it in a tiny, microscopic way but I can still only say things like, “Tengo un pato bonito,” which has yet to come up in conversation and I am skeptical that it ever will. Unless I get a duck. 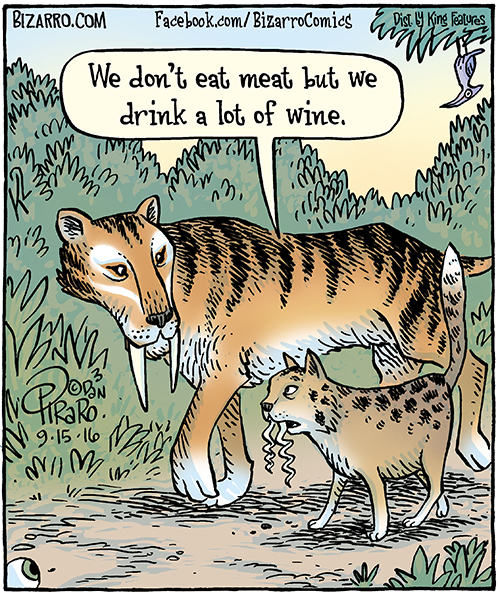 My favorite thing about this saber-toothed tiger and corkscrewed-toothed bobcat is the drawings of the animals. If you’re a big drinker of wine, you might like it for that reason but I’m more of a tequila and whiskey kind of guy. I like wine and drink it on occasion, as long as it is red, but if I get drunk on it I get a worse headache than pretty much any other kind of booze.

Service animals are a funny thing. Keep in mind as you read the next few sentences that I have no personal experience with service animals, nor have I read up on them or even googled the subject. But it is my impression that while some people use service animals for obviously important things, as is the case of seeing-eye dogs for the blind, there are also people who get anxious if they don’t have their pet caiman with them and overly compassionate people put pressure on weak, liberal politicians to give them that right, and then they want to visit a children’s carnival and somebody’s baby gets eaten. Maybe that never actually happens but now that I’ve put it on the Interwebs, thousands of people will think it did even if every major newspaper in the country proves the story is false. That’s how things work now. 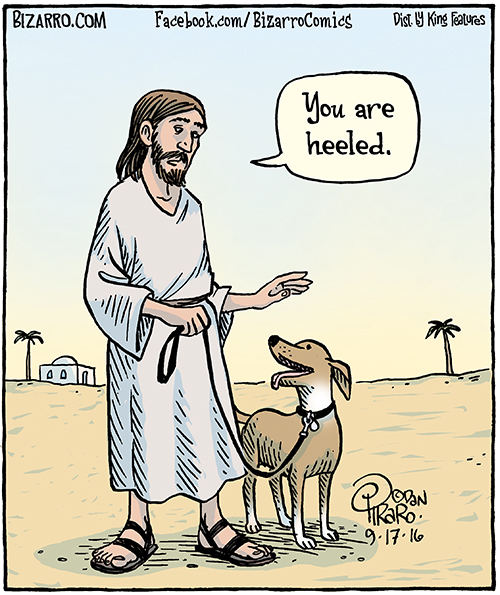 And now here’s a cartoon of Jesus heeling a dog. Is it a harmless pun or does it heretically ridicule our Lord and Savior and it sure is telling that I wouldn’t dare make this cartoon about Mohammad? Depends on your version of reality.

If you enjoy thinking about things the way my cartoons lead you to, please consider supporting my efforts (and my pato bonito) with a one-time donation or a monthly contribution here.

Another way to support my humor is to buy a piece of original art from Bizarro, or a limited-edition, signed and numbered print of one of my favorite Bizarro gags. The original art is black and white, the prints are in color, both are framed, super nice, and make a wonderful gift for friends and enemies alike. Even for yourself. Do it here.

Thanks for your eyes, Jazz Pickles. Have a great week!