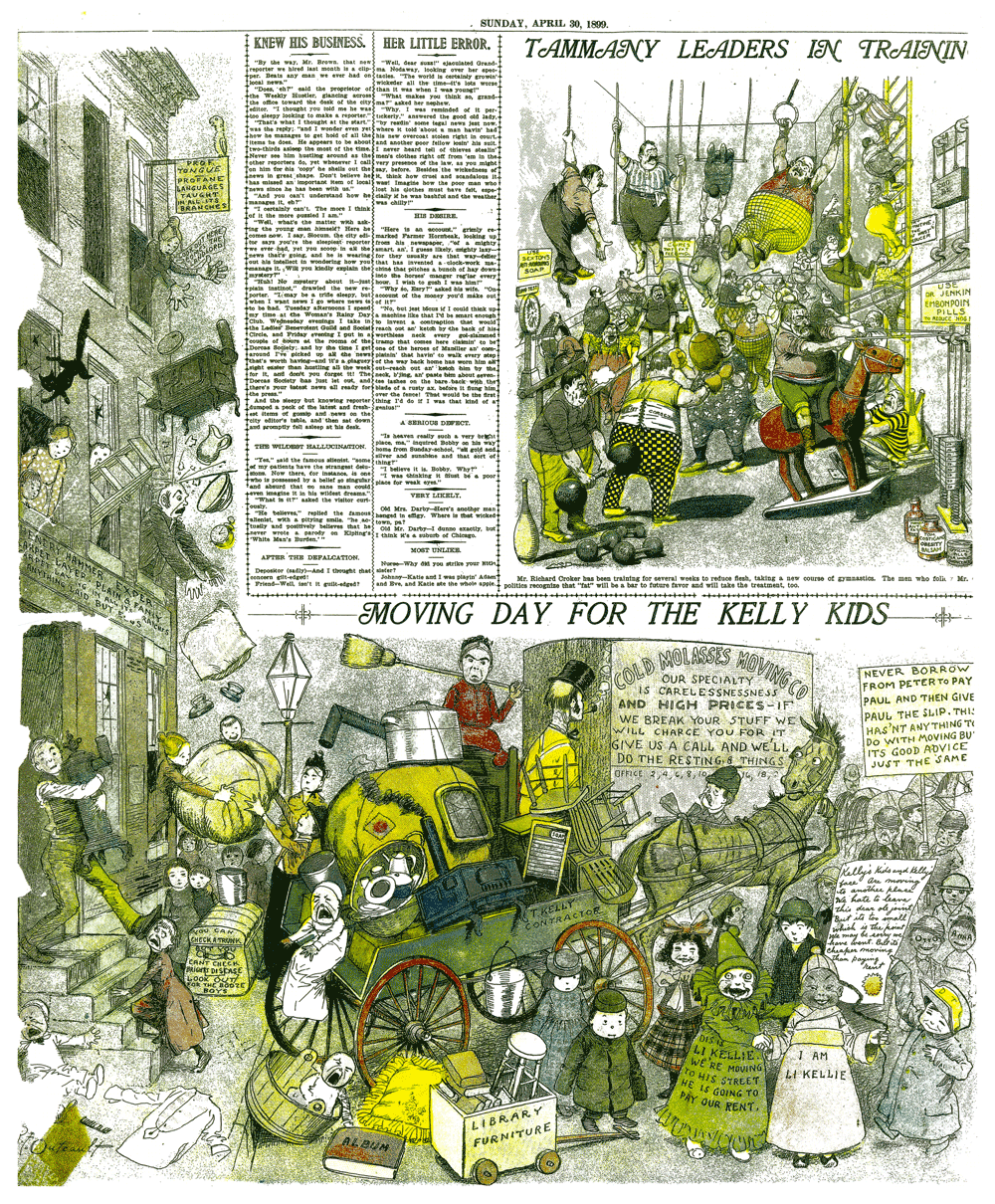 Attention, all you fans of fakes, connoisseurs of counterfeits, and derivative devotees. Today we spot some knock-offs of onetime Hearst strips.

The rough-and tumble world of comics syndication a hundred years ago was a veritable Wild West of loose copyright controls. When a strip was popular enough, few had any reservations about making their own variants, with (or even without) minor changes.

Since Hearst’s line of strips were the leaders from the very beginning, our competitors followed that lead. Our main rival was the Pulitzer organization, or “Press Publishing Company, The New York World,” as their copyright line would read. Perhaps as a manifestation of a perceived inferiority, they seem to have produced a lot of series “inspired” by other company’s successes, especially ours. Let’s sit back and watch: 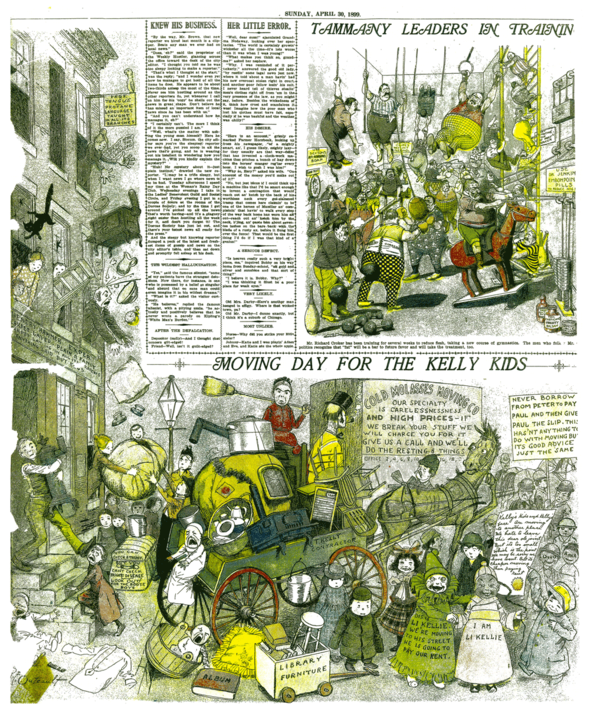 In the 1890s-1900s, R. F. Outcault was the hottest cartoonist around. His services were bid and outbid for by Hearst, Pulitzer and the New York Herald several times, leaving him putting out multiple series. Here, at Pulitzer on 30 April 1899, we spot the unsettling grimace of his latest character, the answer to the (now at Hearst) Yellow Kid, The Green Kid. 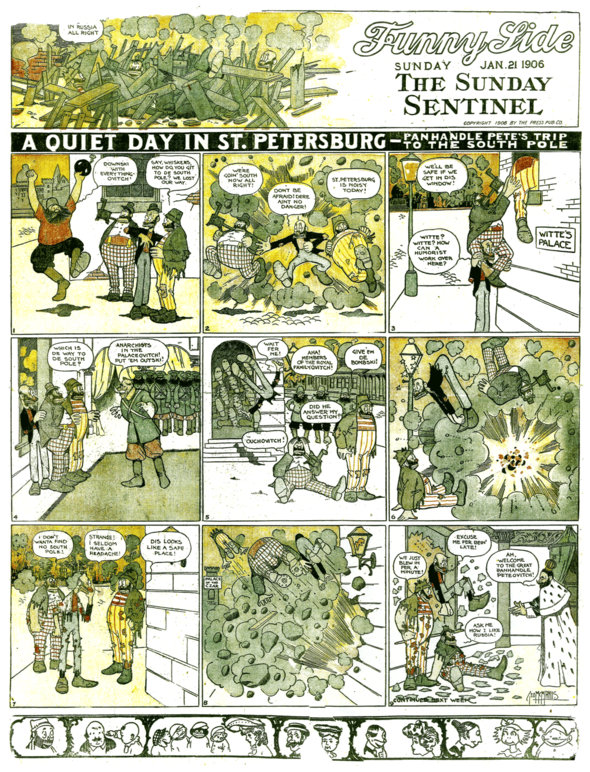 Fred Opper’s Happy Hooligan was one of the big hits of early Hearst comics, and numerous bums, hobos and vagabonds followed him in the pages of lesser syndicate offerings. One of the more imaginative titles of the genre was George McManus’s Panhandle Pete in the Pulitzer section. In this example, Pete follows Happy’s lead and takes his pals on a European tour. Pete was ostensibly en route to his own expedition to the South Pole.

Russia in 1906 was always caricatured as a seething mob of bomb-hurling anarchists. Terrorism could be funny—provided it was not happening to you. Tsar Nicholas II makes a guest appearance. 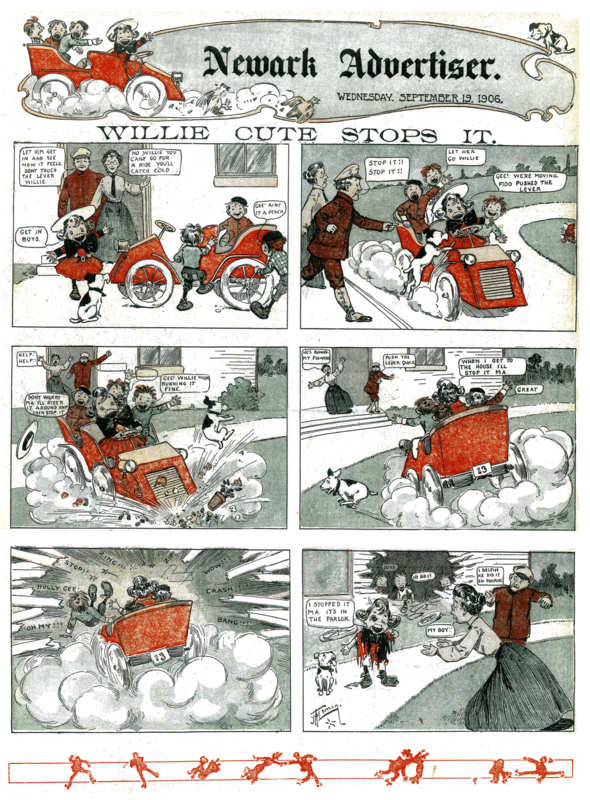 The ironically named Willie Cute, by J. A. Lemon, was a McClure knock-off of Buster Brown in 1906. If you’re wondering why a Wednesday date appears on this section, it seems this paper, the Newark (NJ) Advertiser was in desperate shape, and tried the novel idea of running comics sections twice a week to boost interest. They installed two ready-print sections (the other being World Color Printing) for this use, but unfortunately it didn’t help and they bellied up in 1907. 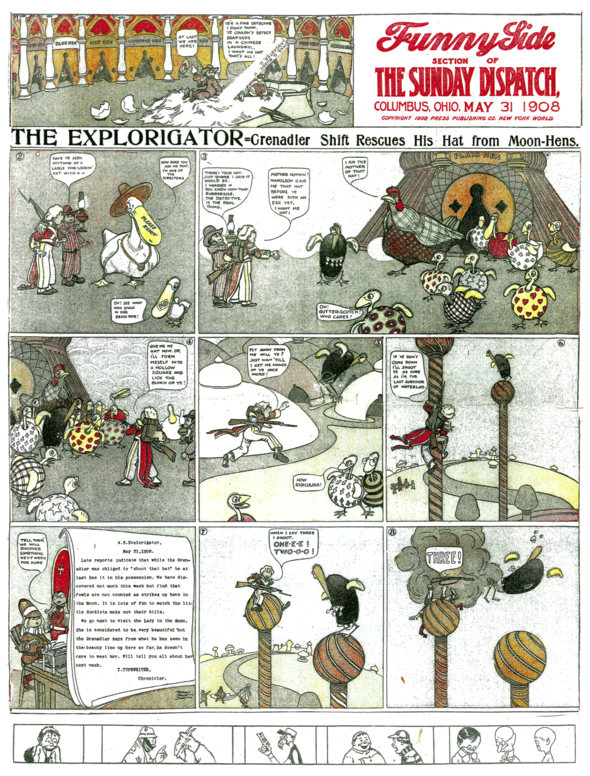 The New York Herald syndicate’s Little Nemo In Slumberland inspired a lot of fantasy strips, one was The Explorigator by the great Harry Grant Dart for Pulitzer. Well done, but forgotten. There were a lot of dreamers in Nemo’s wake. They ran the gamut from hair-raising adventures like George McManus’s Nibsy The Newsboy in Funny Fairyland (Pulitzer) to the dull thud of The Naps of Polly Sleepyhead (Philadelphia Press) by Peter Newell. 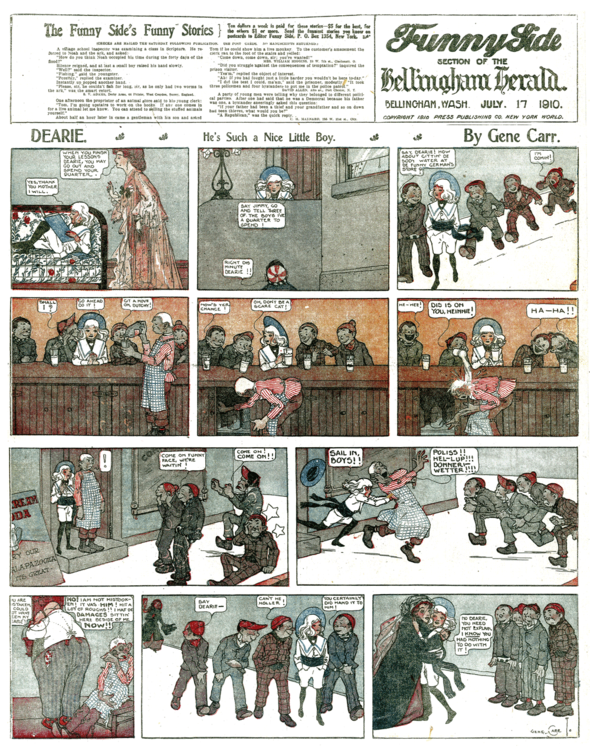 Another twisted version of Buster Brown came from the enterprising hand of Gene Carr, “Dearie.” He was a Little Lord Fauntleroy lookalike, but instead of being a sissy, he headed his own street gang of thug boys that pulled off petty crimes and violence. Another Pulitzer short-lived creation. 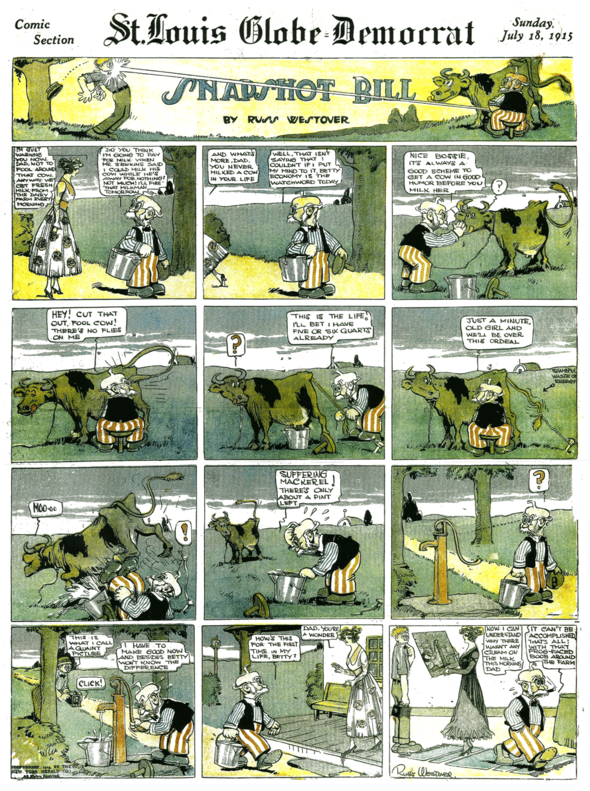 In 1915, the hottest new strip was Hearst’s Polly And Her Pals. A not-hot strip was the New York Herald’s Snapshot Bill, which was drawn by pre-Tillie The Toiler Russ Westover. What to do? How about a blatant rip-off of the hot strip? If you mistook “Betty” and “Dad” for Polly and Pa Perkins, that’s the idea. 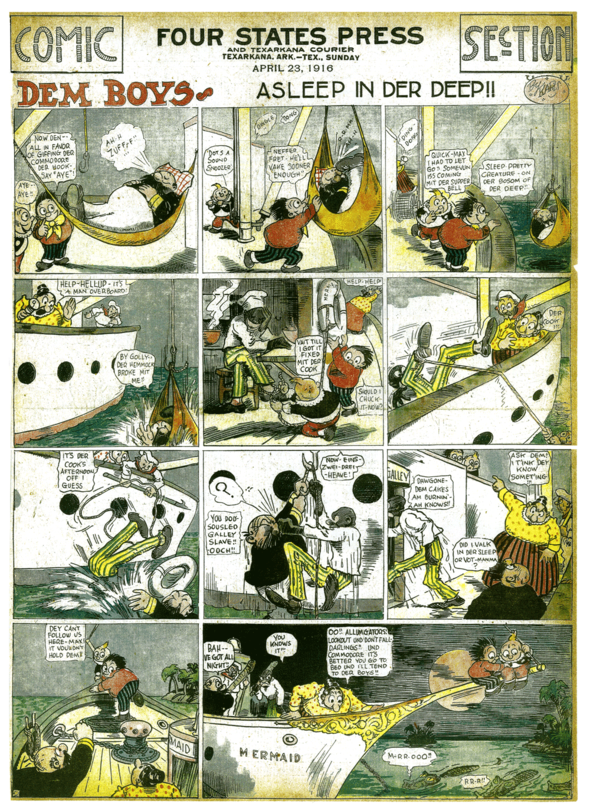 But the most shameless, outright steal I think ever existed, was “Dem Boys”, a World Color Printing series of 1914-18, drawn by “Karls” (Ralph Hershberger). After the settlement between Hearst and Rudolph Dirks, the law allowed a doppleganger version, with minor adjustments,  such that Hearst could keep the name “Katzenjammer Kids,”  but Dirks’ new version was christened “Hans and Fritz,” later “The Captain and the Kids.” The terrible two also had to exchange names in the Dirks  rendition.

In the WCP version, Instead of “Der Captain” and “Hans and Fritz,” it was “Der Commodore” pitted against “Max und Chulius.”   Standards were different. I would think such a thing would be unimaginable today.

Thanks for your praise.  Seeing the comics, or even the news articles not relevant to the event we focus on, from a given day in history provides a kind of marker in our lives. The KFS strips of 2001 are mostly all still in place today, with only Apt. 3-G, The Better Half, Crock, and Grin and Bear It since dropped. If you missed a few others in this ongoing series of historic dates, look back now:

Fortunately, there were no unintentionally ironic strips that day that might have involved a terrorist or an explosion of some kind. If there had been, you know that some conspiracy nuts would find significance in it.