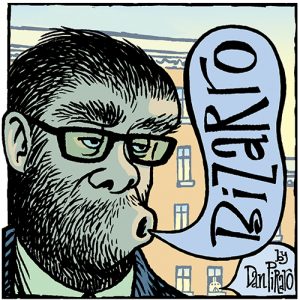 (Enjoy these cartoons more through the magic of embiggenation. Click any article of clothing within a cartoon to achieve it.) 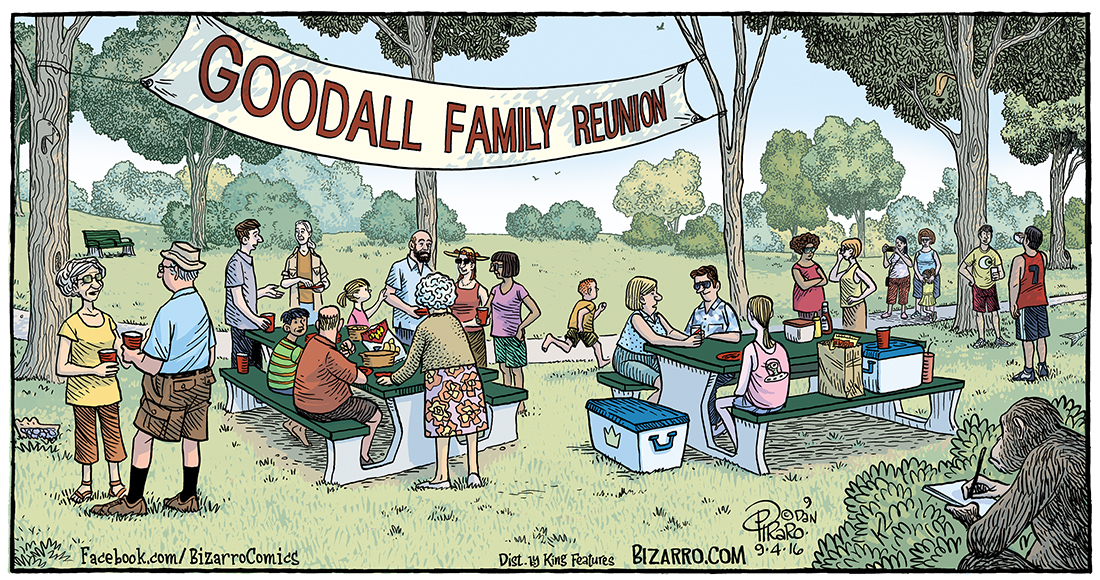 Bizarro is brought to you today by Another Monkey Cartoon.

What happens when a super smart British lady crouches in the bushes for 56 years? We find out a lot about chimps and also ourselves, since we are their closest relatives, that’s what! Some of what she learned is that, like us, chimps sometimes commit random acts of violence against their own kind and that we, like them, if imprisoned in a zoo, sometimes go crazy and throw poop. Yes, I am intentionally writing this paragraph as a sixth-grade C student might write a school report.

On a different topic, there are NINE secret symbols in this cartoon, so click it, embiggen it, and get started searching! 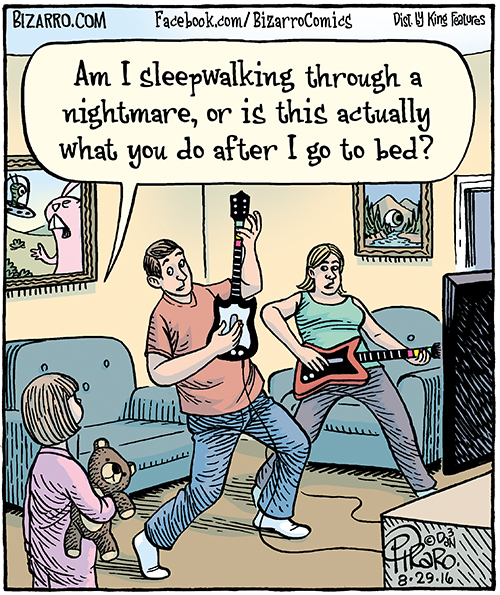 These parents are playing one of those rock ‘n’ roll guitar video games, which is reportedly a lot of fun but makes you look pretty goofy. This child has been scarred for life by happening upon it. Do any of you Jazz Pickles have memories of embarrassing things you caught your parents doing when you were a child after you went to bed? Keep the language clean, please.

I actually used to sleepwalk quite a lot as a kid and have a few vague memories of walking into the living room where my parents were watching TV and being led gently back to bed. Another time I was awakened in the middle of the night by my parents bursting loudly and frantically into my room and turning the light on. They were visibly terrified and told me that I had screamed (in my sleep, apparently) in such a blood-curdling way that they were sure I was being attacked or kidnapped. I didn’t even remember having a nightmare. So strange. 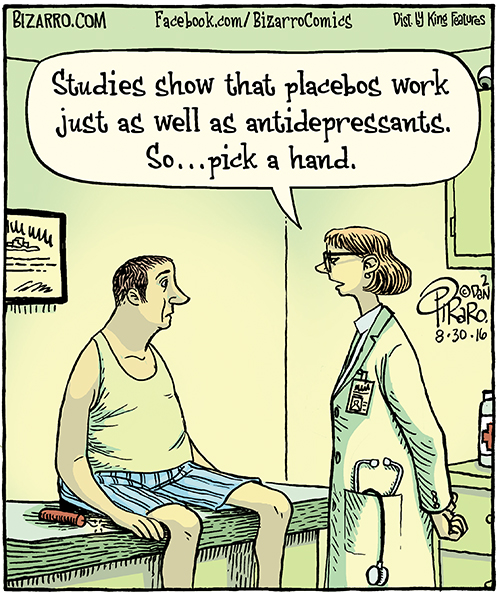 Somebody in some comments somewhere scolded me regarding this cartoon for making fun of depression because it is a serious illness. Yes, it is. I’ve suffered from it my entire adult life, starting when I was about 19. I was on antidepressants from 1996 until two years ago, when I quit. (The safe, medically recommended way.) Since then, I’ve been able to manage my depression pretty well with meditation, positive thinking, and staying busy on art projects that feed my soul, like oil painting. (Cartoons are fun but they don’t have as powerful an effect on me, probably because they are a business with deadlines.) Anyway, reading that placebos work as well for depression as do antidepressants made me change the way I thought about it. It isn’t to say that depression isn’t real or that antidepressants are phony, it says that the power of the mind to heal itself (and the rest of the body) is more powerful than we often realize. It isn’t easy to tap into that power, but it is possible. I’m not advocating this approach for everyone, I’m just saying that for me in this case, it’s working pretty well. Though it isn’t always easy. One small part is to realize that feeling good all the time isn’t a natural state of being and to just relax and be more accepting and less troubled by feeling anxious or depressed from time to time. 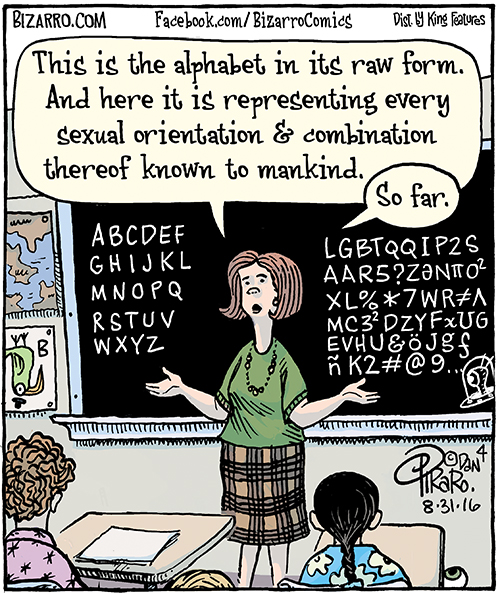 A few weeks back I did a cartoon about the growing LGBT list of sexual identities and I got some flak from people who thought I was ridiculing non-hetero folks. I apologized appropriately for the misunderstanding and admitted that the cartoon was poorly worded and could easily have been seen that way. (I can be a jerk but I don’t like being seen as a jerk in a way that I’m not actually a jerk. And I have zero tolerance for homophobia, hence my revulsion at the thought of being seen that way.)

With the cartoon above, I only got one complaint from a dude who seemed to just want me to be homophobic so he could hate me. Whatever. Truth is, I didn’t think I’d get a lot of heat from this gag because it isn’t ridiculing anyone, it’s simply pointing out that our attempt to label every single type of sexual identity, preference, orientation, and lifestyle is a very unwieldy process that has no logical end. I think eventually our society will get to a place where we don’t have to label ourselves, we can just be who we are and nobody will give a shit what we do in our private moments or with whom we do it. Perhaps I’m being overly optimistic, though. Somehow, I think bigots will always be with us. 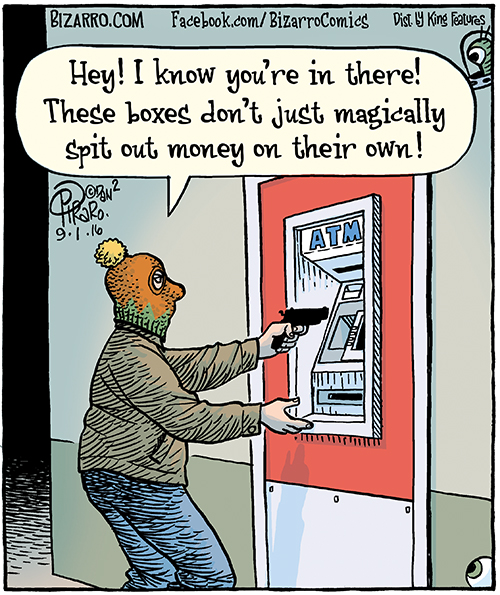 Here is a cartoon about a very stupid criminal. Stupid people committing crimes is one of my favorite things, actually. There are any number of stupid criminal examples on the Interwebs that will make you smile. If you are a stupid criminal and you resent my making fun of you in this way, you can leave a nasty comment but I won’t apologize. 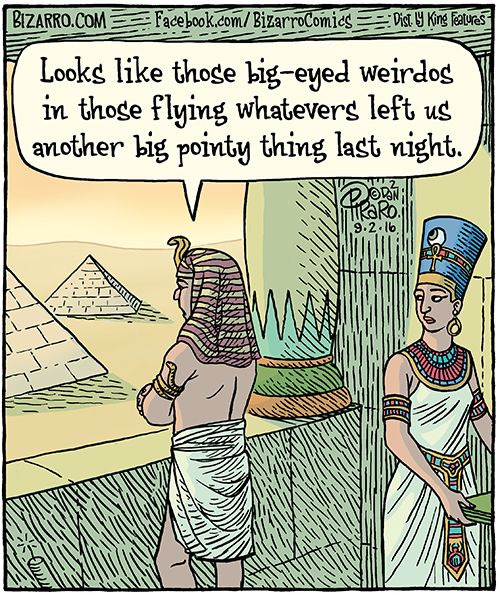 This Egyptian cartoon tickles me for a couple of reasons. One is that imagining people from great civilizations of the ancient past talking like modern-day nitwits instead of thoughtful British intellectuals like they do in Hollywood films is funny. The other is the unquenchable thirst our species has for magical solutions, which I also find amusing. If you’re one of those folks who believes it is possible that aliens built or taught the ancient Egyptians to build pyramids is reasonable, you’re probably miffed right now imagining the smug look on my face as I typed that last sentence. See? I told you I could be a jerk. 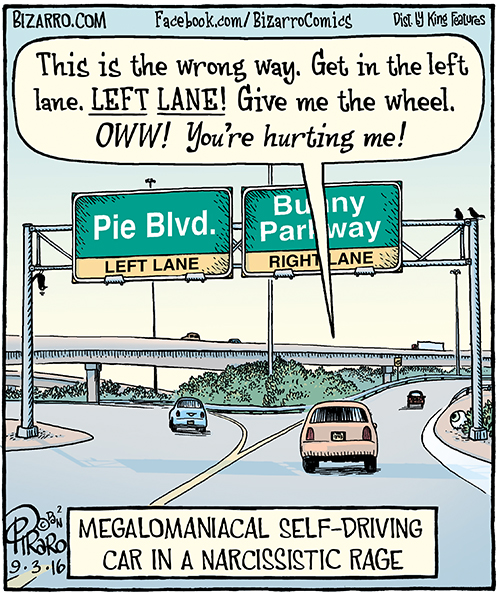 I don’t usually care much about the latest technology, but I am actually fascinated by self-driving cars. The technology isn’t totally there yet, but it is sufficient to easily see how self-driving cars can and will be far more safe than human drivers. In my opinion, almost anything would be a safer way to drive a car than letting just any old human do it. Driving tests are not nearly hard enough to ensure safe driving.

That’s it for me this week, Jazz Pickles. It is always so rewarding to spend time with you in this manner. Thanks for your donations, monthly contributions, purchase of my occasional books and your newspaper subscriptions. Without you, I’d not be able to afford this ludicrous activity I call a career.