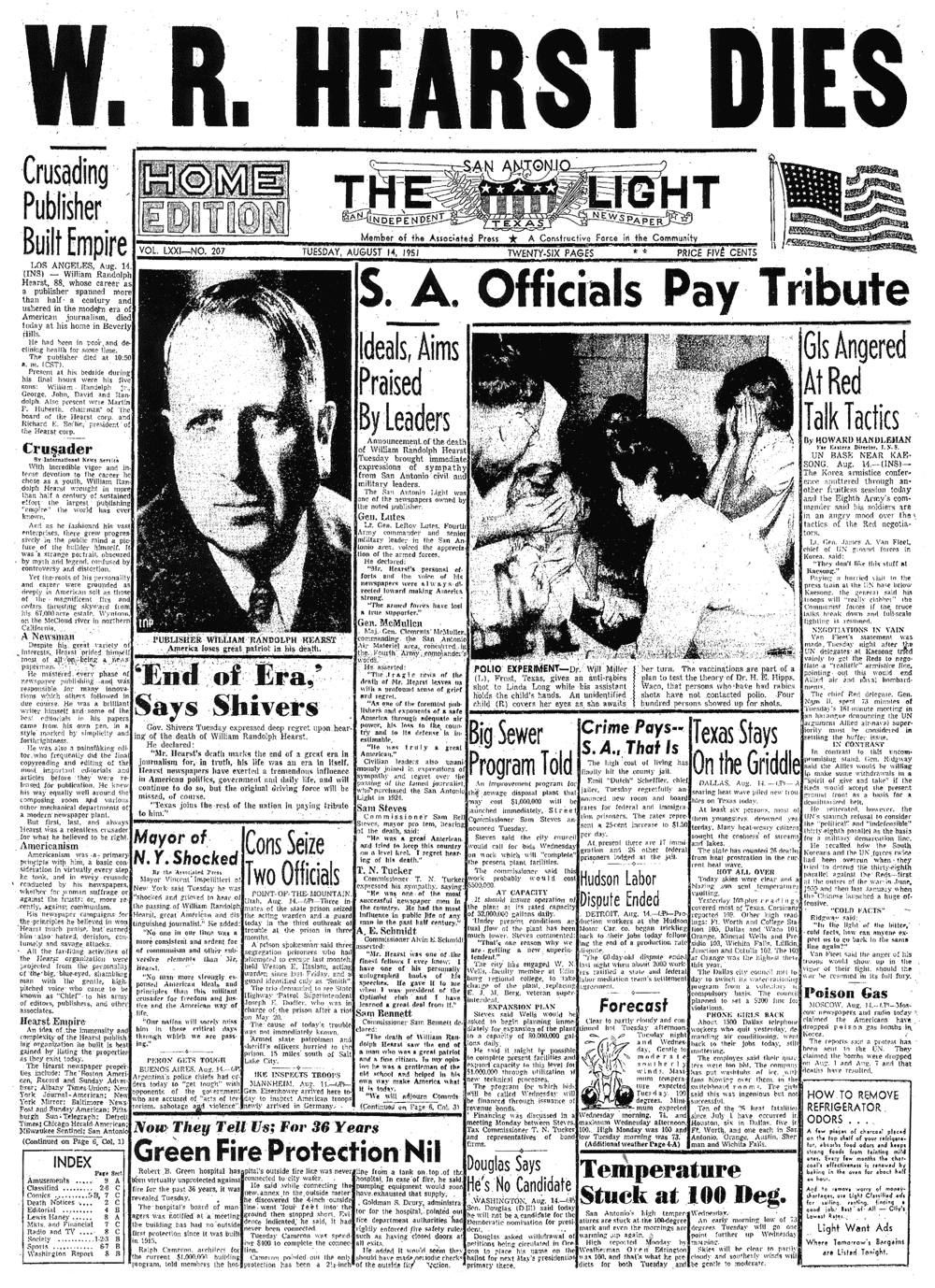 Another double-barreled commemoration is upon us, concerning the grand master of King Features comics, Mort Walker, and his beloved creation, Beetle Bailey. I don’t know how he and Beetle could have their big days so close together, serendipity, I guess.

Mort will be ninety-three on 3 September next, and we cherish that such a great talent is enjoying the fruits of his labors so long. Sixty-six years as a top syndicated cartoonist must be the world’s record. 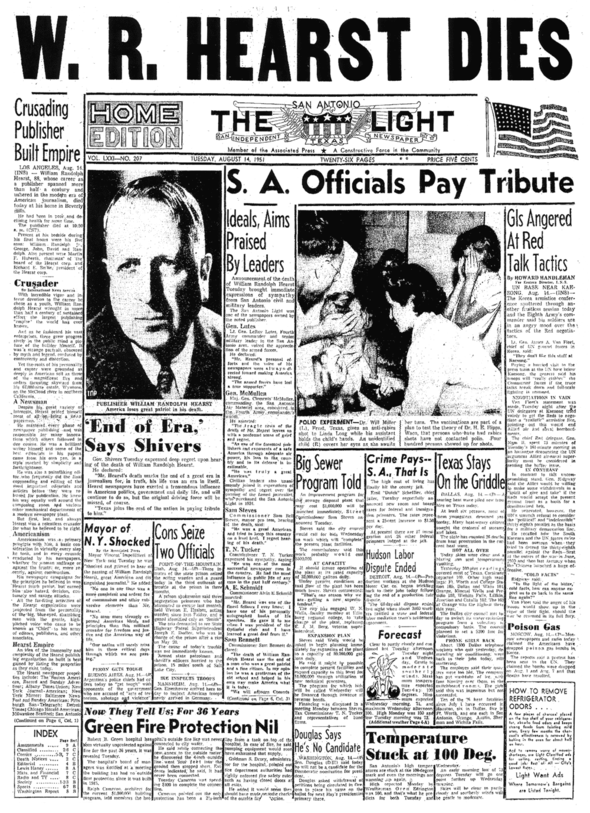 This month, another anniversary was on the 14th, It’s been 65 years since the passing on of our founder, the multi-media pioneer, William Randolph Hearst. That event is seen here covered in
a Hearst newspaper, complete with mourning margins. It ties in well here, because
Beetle Bailey was the last strip approved for the syndicate by “The Chief” himself. 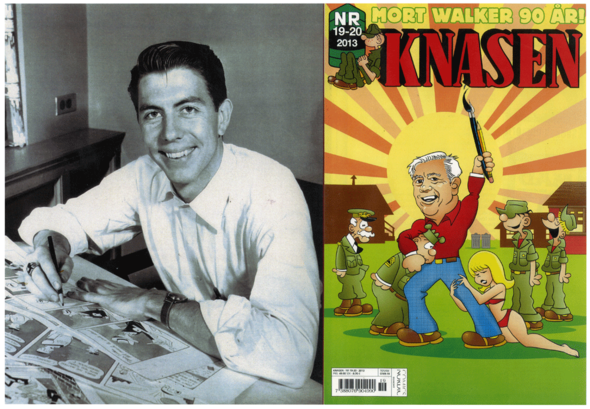 (LEFT) A fresh-faced, twenty-seven-years young Mort Walker pretends to do some pencil work on
the Beetle Bailey original artwork of the 23 September 1950 strip, sitting on top of those of
19 and 20 September. (RIGHT) An older, cartoonier version of Mort celebrates his 90th birthday
by holding Sarge in a headlock on the cover of this 2013 Swedish comic book. 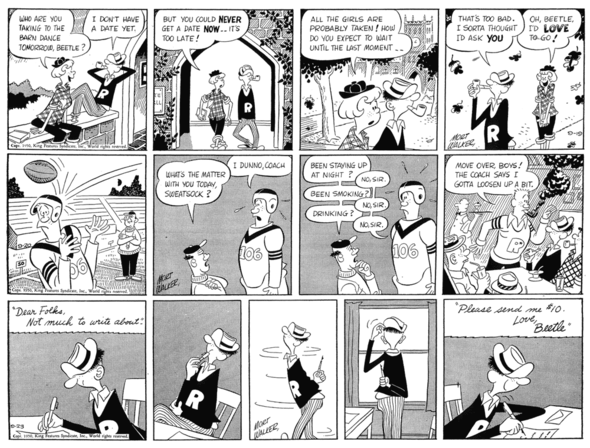 Those very strips. When Beetle started, its theme was college capers, one that found only minimal clients or fans. The switch to army life found huge public approval, and many papers eager to publish it. 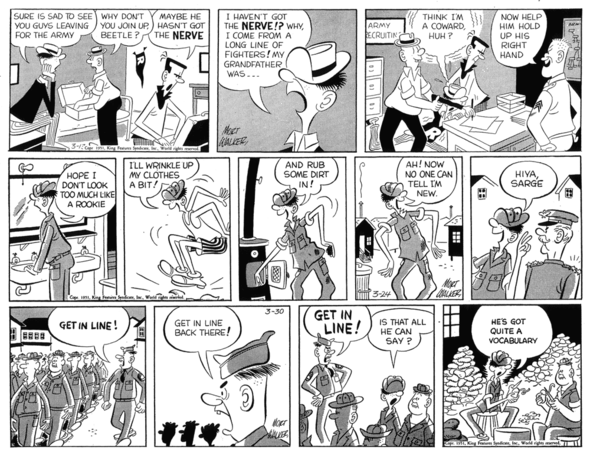 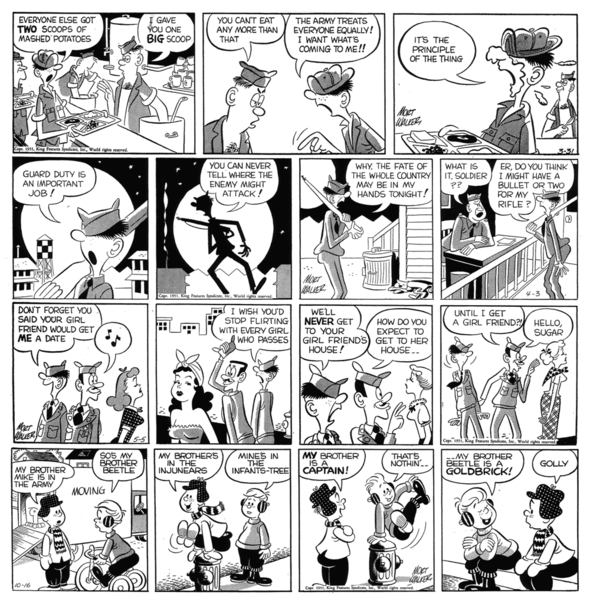 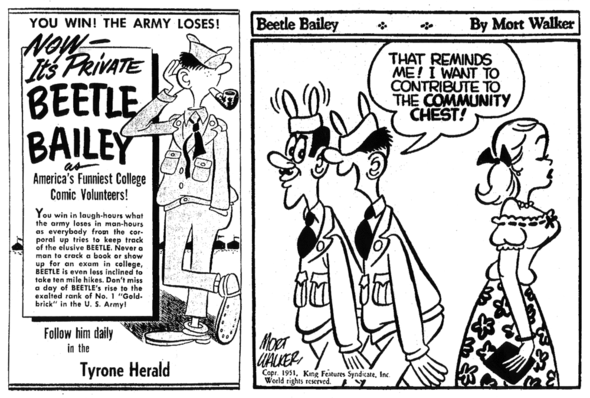 (LEFT) The first newspaper promo showing Beetle in the Army, spring 1951.
For a little while, a few papers called the strip “Private Beetle Bailey”.
(RIGHT) A PSA issued October 1951 shows a slightly risqué gag, but it’s all for a good cause.

Happy birthday to Mort and Beetle!

Before I go, here’s the Mail Bag:

I will have an entry on the current state of the Katzenjammer Kids in a few weeks.

The “Red-Blooded Men” reference was not intended to be literal, as I would think all human blood is red.  The term denotes a virile, dynamic  sort of specimen that would be most desirable for Navy life. The figurative yellow blood would mean one was a coward, and if he was a blue blood, it would indicate some snobby elitism not desirable in a fresh recruit.