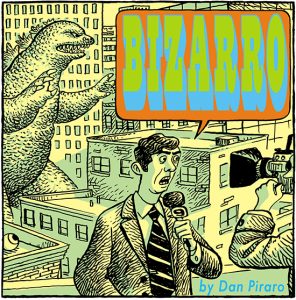 (Clicking any articulated joint in any of these images will embiggenate the image.) 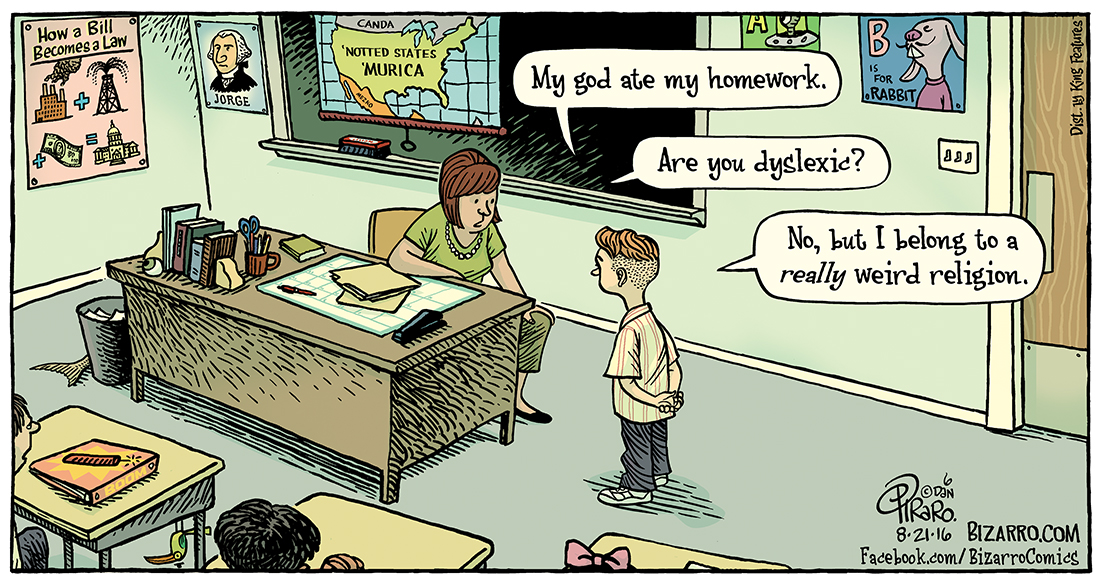 Bizarro is brought to you today by Strange Olympics.

There is much fun to be had in this comic featuring a twist on the age-old comedy motif of the kid whose dog ate his homework. Aside from the deep, theological concepts within the dialogue, there are plenty of background jokes and six secret symbols to search for. Embiggenate it for a more complete experience. 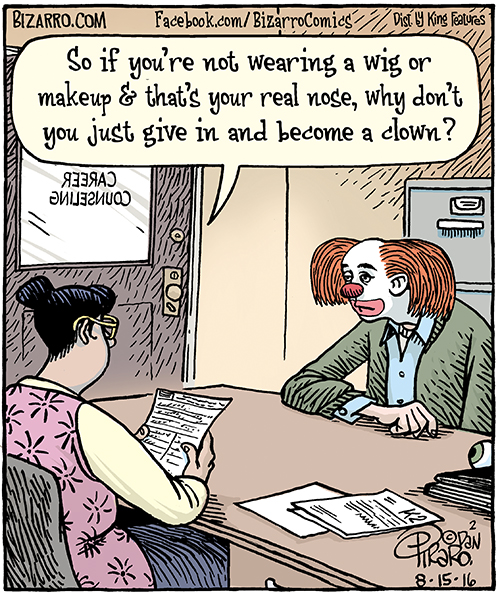 I have no idea why this guy just biologically looks like a clown, but since he does, I made this cartoon about it. The moral of this story is not to fight nature. It’s the reason I didn’t follow my childhood dream of becoming a flying horse. 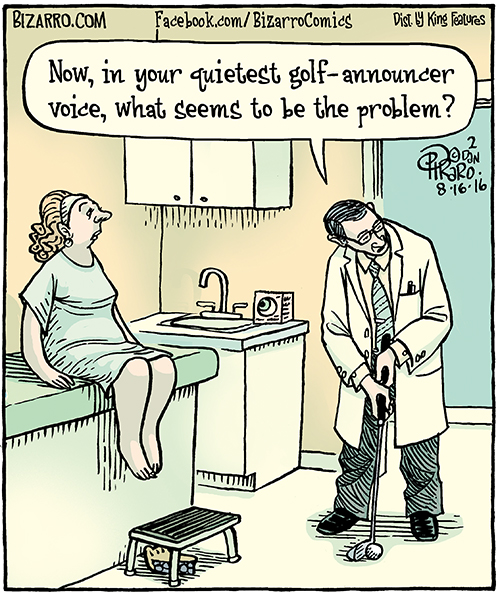 I’m no fan of golf but my dad is and I used to watch it on TV with him when I was a kid and he even took me to a PGA tournament once. Jack Nicklaus and Arnold Palmer were two of the big stars then, and that was before that lemonade/tea drink was named after him. Because all of the other sports I watched featured rowdy, shouting fans, I was impressed by how quiet the spectators were and that even the commentators were whispering. I haven’t watched golf on TV since but I assume they still whisper. 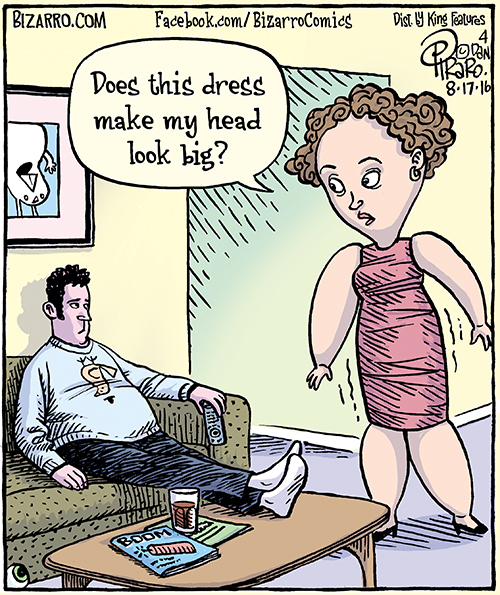 I’ve done a few “does this (blank) make my butt look big” cartoons but in this case I thought I’d push the envelope a little and imagine a large woman stuffing herself into such a small and sturdy dress that it squeezed her like a water balloon. 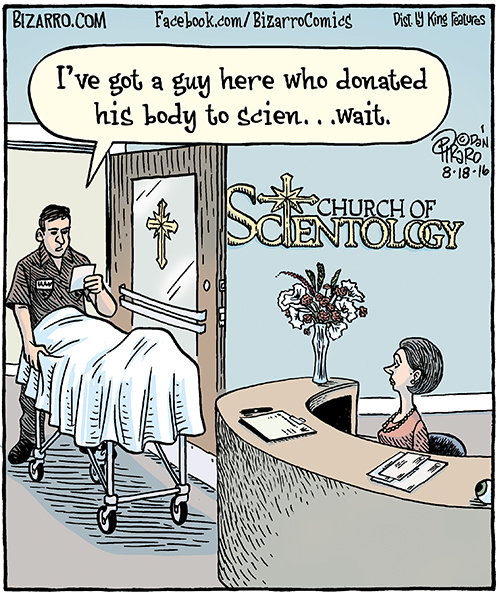 I didn’t realize until I started writing this blog post this morning that there were two religious-themed cartoons in this week’s batch. (Three if you count the next one featuring Satan.) This one isn’t really about religion, of course, but about a delivery guy who skims instead of reads. I find this happens a lot these days with emails and texts. I will write a few sentences that clearly express the information I wish to impart, and the other person will respond in a way that shows me they glanced at a few key nouns and verbs and made up an inaccurate narrative of their own in a split second. Come on, people. Reading is a hallmark of our species. Dogs can pick up a few words in a sentence and get a rough idea of what you mean; I expect more from my human associates. 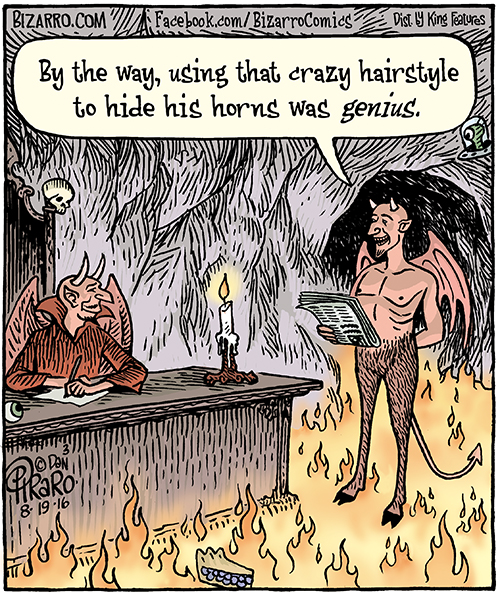 This cartoon about mythological hell caused another shit storm in the comments section of my FacadeBook page, of course. While most people in the U.S. and around the world see Donald Trump as a dangerous, unqualified buffoon, a relatively small number believe he’s no worse than Hillary Clinton and want me to either stop doing political cartoons at all, or give equal time to Clinton. I don’t have time to respond individually to each person who complains about these things, so here are the two main reasons I do cartoons about Trump and not Clinton:

If you’re typically a Republican voter, I can completely understand your anger for having been given such a terrible candidate, but your anger should be directed at the GOP, not at those of us who point out the inherent comedy in Trump. 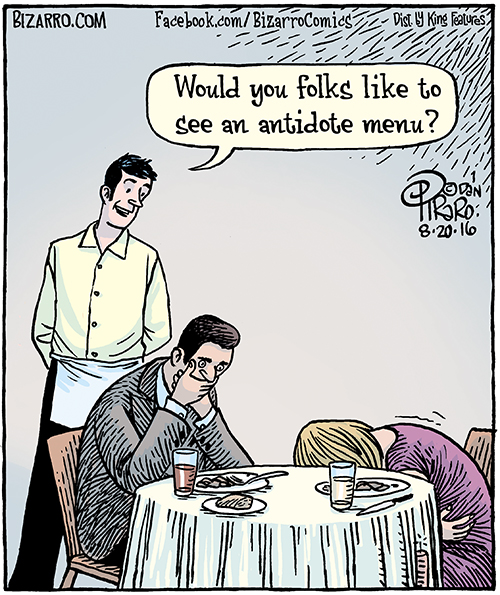 Thanks for reading this far, Jazz Pickles. If you’re enjoying Bizarro online for free, please consider one of the several ways you can help to support my efforts. Links are below.

A one-time donation or monthly contribution to Bizarro.