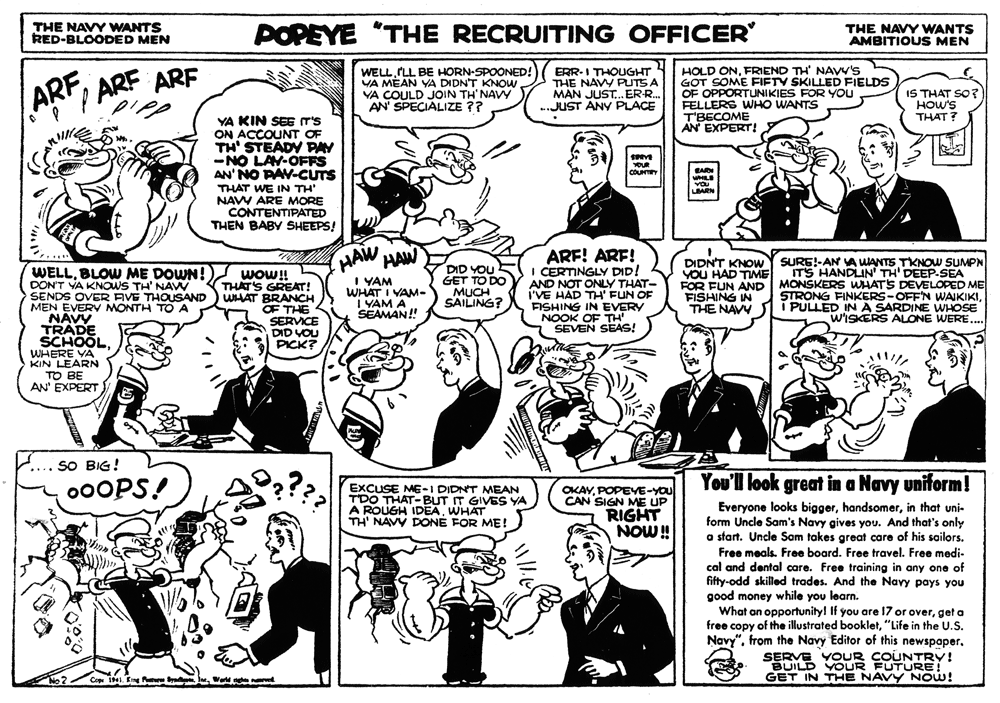 Today’s post marks the 250th entry in succession for Ask the Archivist since we began on 31 August 2011. Before the celebrations get out of hand, take a look at what I hope to get away with for an entry today: Popeye the Recruiting Officer.

Many years ago, during John Kennedy’s term in office, Mad magazine did a parody of the then current phenomena of public service comic books. These would be freebie short-page count publications that addressed everything from how nuclear power works to urging more use of psychiatric help.

One of Mad’s ideas was to have JFK introduce Popeye, who would talk up Navy enlistment. Popeye’s sales pitch went south when, in relation to Olive, he lamented you’d end up meeting “skinny, ugly broads!”

You might think that the prospect of the U.S. Navy taking Popeye seriously enough to use him as a recruiting spokesman belongs in the pages of Mad, but lo and behold, there was a time when they did just that. It was just before the war, and King Features helped produce the ads.

It was drawn by our all-around bullpen man, Joe Musial. They were seen mainly in small-town newspapers, quite frequently in the Midwest. They had such titles as The Ord Quiz (Ord. Nebr.) and The Eufaula Indian Journal (Eufaula, Okla.).

The earliest I’ve seen any used is in July 1941; they were issued about twice a month (America’s small-town papers were usually weeklies) until January 1942, though some papers ran them, by then all repeats, as late as March 1942. It would seem there was no problem in getting recruits after Pearl Harbor anyway.

It seems like a frivolous way to build up naval recruitment, especially in the dire year 1941, when it was widely assumed we’d be at war soon. And to make it even more unserious, the pitch for a hitch addresses things like whether you have to pay for your uniform, or if there’s a place for those who are musically inclined. Also, you may get some valuable training, but more importantly, you’ll apparently meet lots of girls in the Navy. Who’d have thought?

Musial was never a great artist, and here he also shows his less-than-poetic gift for dialects, having Popeye mispronounce words the wrong way. If you know what I mean. Have a gasp at them: 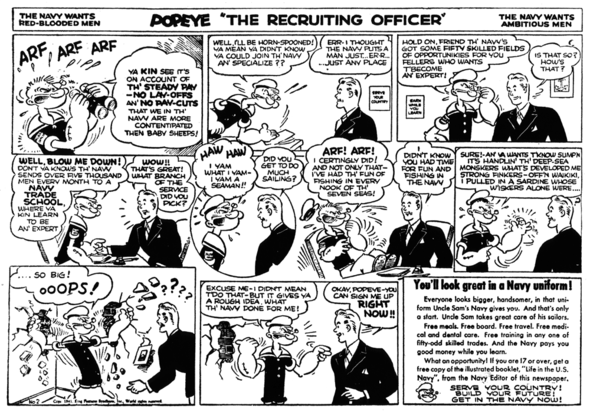 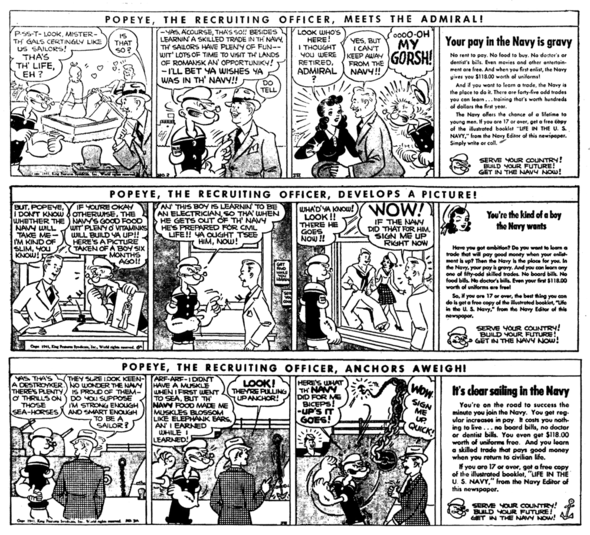 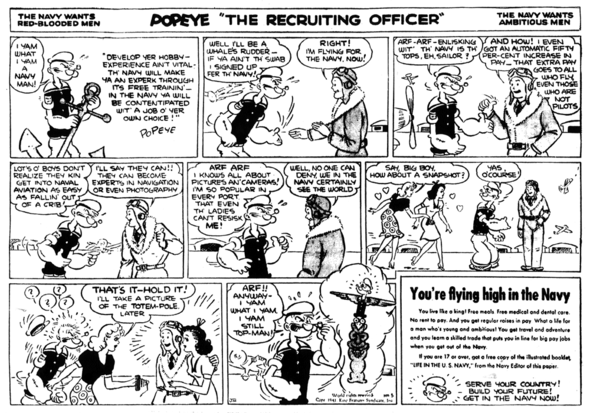 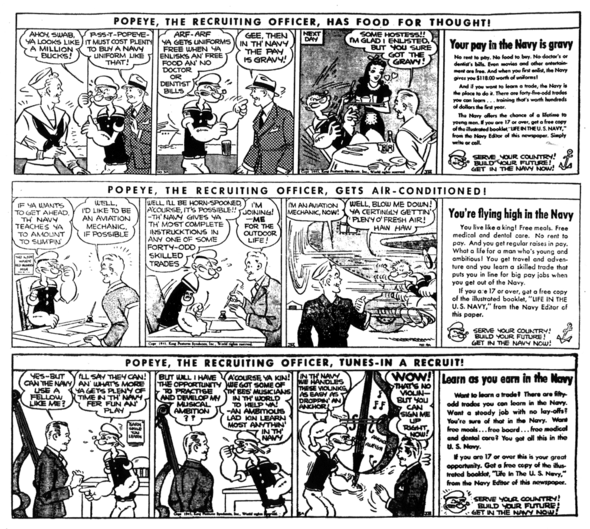 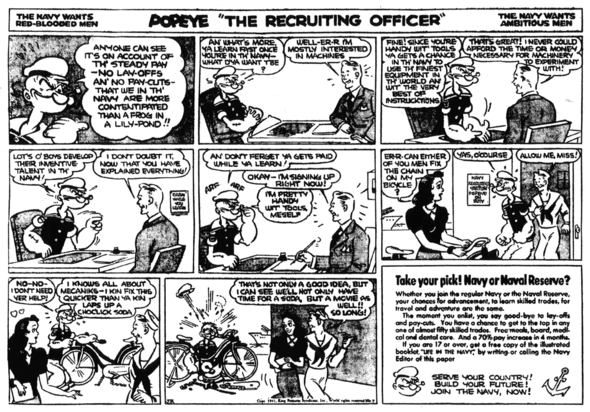 There was a numbering system for these, but it doesn’t make much sense to me. Two have “No. 2” designations, others have numbers like “3-a,” indicating there was more than one series, or maybe two versions of one strip were needed.  Some papers ran the same one multiple times, or maybe just one. The “admiral” one seems to have had more currency than the others, and some I only saw once in multiple papers. (Please excuse the low quality here.) They all seem to be issued at the same time, and they came in two sizes as well, so it leaves me unable to suss it out.

The Navy’s budget could afford the PSAs, but was the money spent effectively? It would be hard to imagine that one of these strips might have moved a young man to sign up for a four-year hitch. Certainly not if you were a Bluto fan.

P.S. And here’s the Mail Bag for this week:

Misha Richter, it might seem, was born to be a New Yorker guy. I would be more of a mind that he consciously developed an Arno-like style, precisely because it would find approval with The New Yorker. Having experience with the gag cartoon mgazines that once were TNY’s competitors and before,  I can offer that a common practice was aping the style of someone already successful. For instance, if you see the early works of Charles Addams, they might easily pass for Steig or Hoff.

Eisman’s Popeye is still new material. As for the final “new” Katzenjammer page goes, I must admit you caught me flat-footed here. I knew it at the time,  but we didn’t make a big deal about it.  I guess we could say they’re “reader Favorites” or “Classic Editions” or some such sales slickem, but a rerun’s a rerun, after all.