Cartoonists are funny people– you have to be, to produce a comic strip every day!  This week, I  asked our cartoonists to take their humor outside the strip, and tell me about their favorite jokes that aren’t reliant on a comic format for a laugh– whether they’re stand-up comedy, sight gags, or good old knock-knocks, here are the best– and worst– jokes from our cartoonists!

Whenever I give a slide talk at a comic convention or other venue, I include this high point of my teenage years. I lived next door to Ed Emshwiller, one of the top sci-fi illustrators of the 1950s and 60s. I posed for this 1957 cover he did. I’m supposed to be hijacking a rocket ship to the moon. And that’s my Dad, in a dead-on portrait, on the “vue screen”, telling me to get my butt back immedately. I tell the audience that this cover succinctly sums up my relationship to my father—I was always dreaming and he was always telling me to “get my head out of the clouds”. Big laughs ensue.

My “Dustin” collaborator and partner in crime Steve Kelley is not only a great cartoonist, but he is also a successful stand up comic. Steve has appeared seven times on “The Tonight Show” and performed in Las Vegas and Atlantic City comedy clubs since the mid 80s. He still keeps his hand in by entertaining convention and event audiences.

Here’s a short set of Steve’s material from 2008 to raise funds for Duke Children’s Hospital and Health Center as part of their Jeff Foxworthy’s Comedy Show.

Here’s an occasion when Dennis got one of his biggest laughs without even trying. 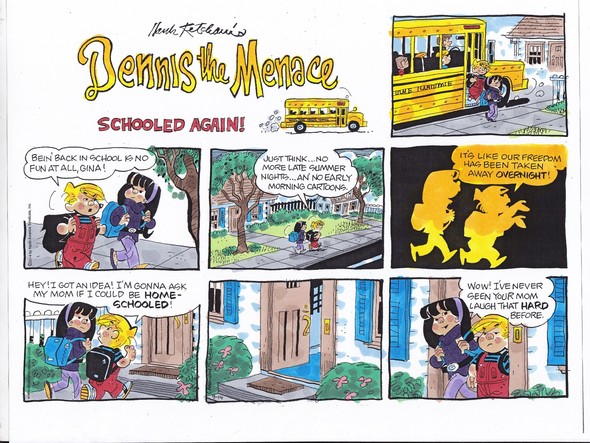 What did the zero say to the eight?

What kind of cheese do you use to get a bear out of a cave?

This is one of the illustrations from my upcoming children’s book, and also one of my favourite bad jokes (Ivan is one of the bullies in the book).

Some of my characters have a sense of humor that’s not nearly as refined and intellectual as *ahem* my own.

I have always loved a good corny joke, especially a pun. In fact, when I was in college if my friends heard a corny joke, even if I didn’t tell it, they called it a “John Rose Joke.” I always thought I’d be the perfect cartoonist to illustrate one of those “101 Corny Jokes” type of books! Here’s one joke I remember: What did the green bean say to the sand dune? How bean dune?!