Ask A Cartoonist: Influences Beyond the Funny Pages

Creative minds get inspiration from so many places– and cartoonists are no exception. While we’ve talked before about comic influences, this week, I asked our cartoonists to discuss other influences in their lives that impacted their careers in comics. Read about the art, writing, film, people, and so many more things that inspire our amazing King Features cartoonists!

It’d almost be easier to answer what doesn’t influence me. Everything I see and experience gets filtered into my work somehow or another. In the case of my writing for the Rex Morgan M.D. strip, I must be influenced to some degree by all those medical themed TV shows that aired when I was a kid — Casey, Kildare, Welby — and later dramas such as the excellent St. Elsewhere. My late mother faithfully watched the NBC afternoon soap operas (though she always claimed, to my amusement, that she “didn’t watch them that much.”) — and so I ended up absorbing a lot of that into my system, so I’m sure some of how I plot and present my stories comes from internalizing that soap opera storytelling style.

With the addition of two kids to the Morgan family, I’m sure there will be bits of family sitcoms and dramas shaping how I present that element of the strip — from Leave it to Beaver to The Sopranos! The real life experience of raising my kids and interacting with my grandkids has an even bigger influence — and when it comes to telling the story of a doctor and a nurse, it doesn’t hurt that my mother-in-law is a retired RN who spent years working at the Mayo Clinic. I’m always running ideas and details past her, to make sure that I’m “keeping it real.”

After I grew out of my early childhood desires to be a cowboy, an astronaut, and Superman, all I ever wanted to be was a fine artist. I worshipped Salvador Dali, Michelangelo, M.C. Escher, and many others. As an adult I found it far too daunting to sell enough paintings to be able to eat regularly, so I turned to advertising illustration and then cartooning. Many of my cartoons show my penchant for classical art, but I think these two examples of cartoons based on the wonderful worlds Escher created most clearly show the influence his work had on me. 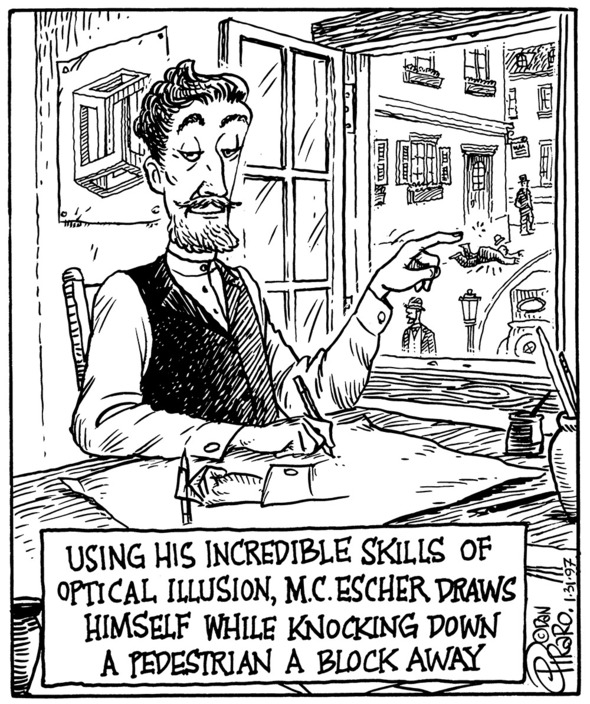 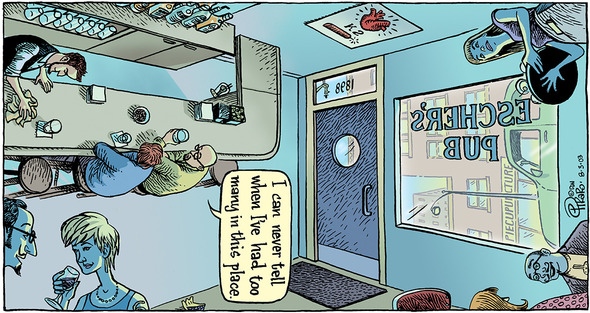 P.S. An LA art gallery is currently selling limited-edition, signed and numbered fine art prints of a handful of my favorite cartoons and both of these are included. http://www.qart.com/category.aspx?srch=piraro 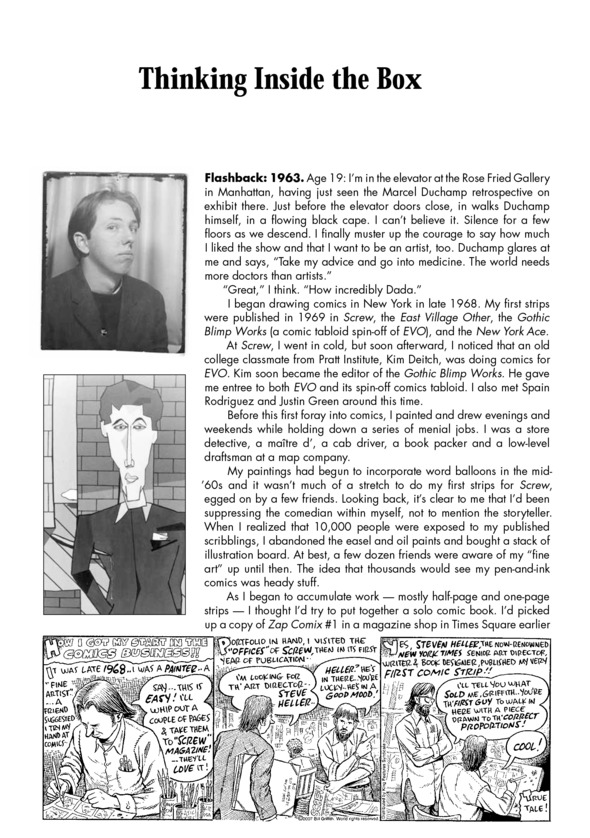 A major influence on my sense of humor was Douglas Adams with his “Hitchhikers Guide to the Galaxy” series. That’s especially coming out now as the “Safe Havens” cast prepares for their Mars journey .

When I was about 9 years old, I discovered Hitchhikers Guide to the Galaxy, by Douglas Adams. It was a fantastic radio series to begin with, but I got all the books and read them over and over. I am sure it influenced my sense of humour.

Though I respect his work, I try not to follow his lead regarding its delivery. He famously said “I love deadlines. I love the whooshing noise they make as they go by”

I think my biggest influence outside of my cartoon artist heroes has been CS LEWIS. He was an Oxford English Literature Professor, but that was just the beginning. He was a Science Fiction writer (Out of the Silent Planet Space Trilogy), a children’s book author (Chronicles of Narnia) and a Theologian. The film SHADOWLANDS with Anthony Hopkins depicted his late in life marriage. This only scratches the surface. His writings were just what I needed to set me on a life course during the turbulent 60’s and 70’s. Amazingly, he passed away the same day as JFK and Aldous Huxley.

Definitely my family, especially my parents. Encouragement is very important to a young cartoonist trying to find his way and they gave me plenty of it! The dedication page in my latest book, Balls Of Fire! More Snuffy Smith Comics, sums up my feelings pretty well! Thank you, Mom and Dad!

I’ve never really been into sculpture, and especially not the sculptures of Henry Moore. In fact, I’ve always thought those Moore people were ugly. But then I changed my mind when I went to an exhibit of Henry Moore’s drawings — wow, what amazing poses and shapes! After studying the drawings, I could see how they led to those massive, often blob-like figures that the artist is now well-known for.

So now I often go to sketch at the Henry Moore Sculpture Garden at the Art Gallery of Ontario. Here’s a sample. And yes… this new favorite artist of mine did find a way into a Tina’s Groove daily….

I had many influences in my life but I think the greatest influence I had was money. I was born during the great depression in 1923 and my parents never had enough money to feed or clothe their 4 children. All four of us had to have gardens in our back yard to grow food for the family. I also worked selling magazines from door to door, newspaper delivery and mowing lawns even when I was starving. No food resulted in me bring the smallest in my class. I never grew till I got in the Army and got some food and added 6 inches. When I was in high school I had several jobs that paid 10 cents an hour but I was always working no matter how hungry I was.

My big break came when I was 12 and sold a cartoon to a magazine for $5. I got so excited I dropped out of school and began selliing cartoons to magazines all over the country. My folks couldn’t get me to go back to school and I sold over 100 cartoons in a year and was written up in news stories with my photo at my desk. I was famous at 12. I went back to school when I realized that writing was the most important part of a cartoon. Then I began writing and winning contests.

When I was 15 and working in the shipping department of Hallmark Cards and heard they were looking for an artist. I got the job and began creating, writing and drawing their cards for $25 a week, ubntil I was drafted into the Army for 4 years ending up as an Intelligence Officer but still only making $25 a month. Then I went to New York and became the top selling magazine cartoonist in the country but only made $5000 a year, so I got a job with Dell Publishing Co. editing 3 magazines for $45 a week.

Then I read that cartoonists who drew comic strips sometimes made BIG money. That’s what I always wanted so I created Beetle Bailey. It wasn’t a success at first so I began making changes till I began hitting the right buttons and it became one of the most popular strips. I still didn’t strike it rich until I finally made a deal for a big bonus. My dream came true and my influences paid off.