It’s been thirty years since Bill Griffith’s underground comix star Zippy The Pinhead went above ground and joined King Features Syndicate. Zippy had been around since 1971, so he’s in the midst of a forty-fifth anniversary, too.

Zippy, as you might know, was inspired by Griffith’s real-life interaction with a Pinhead, as well as Pinheads in popular culture, like the co-stars of the infamous film, “FREAKS”(MGM 1932).

But Griffith has always been more interested in the way culture has impressed him, especially that which addressed kids many years ago. At any time, incomprehensibly, long-dead actors or forgotten corporate mascots might appear, and interact with Zippy or Griffith’s cartoon alter ego. It’s like a surreal dream, often punctuated with misty bits of philosophy and out-of-date advertising catchphrases.

Today I’ve picked some of the Zipster’s various encounters with comic characters, some of which aren’t even Hearst titles, but it’s all in the service of satire, so it’s perfectly legal, Have a look: 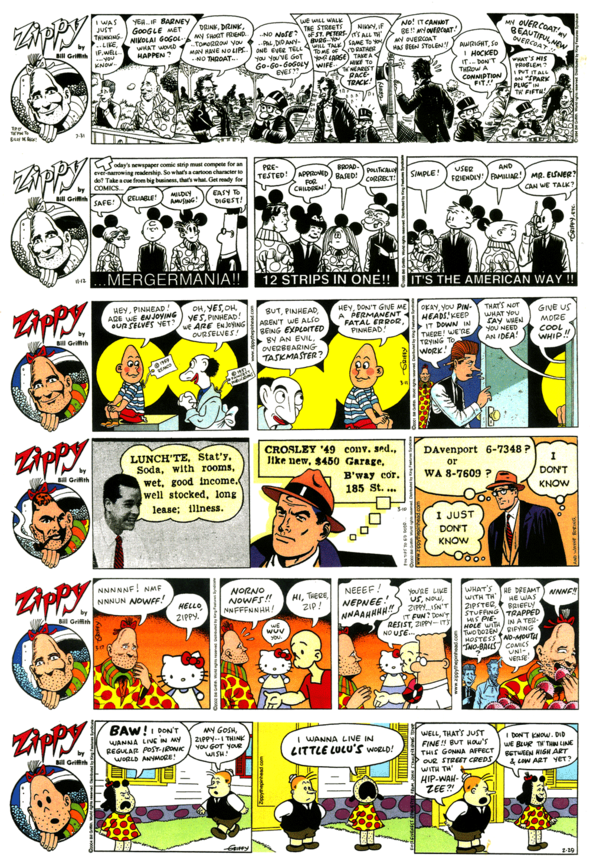 Having fun yet? Have a safe Bastille Day.

Yours,
THE KFS ARCHIVIST MAN.

P.S. Betcha thought I forgot! Here’s the Mail Bag for this week:

The Dennis comic book you describe was a vacation holiday special in 1958. It may be valuable more in sentiment than money. I see on Ebay at this moment you can get two copies of the original, one for $4.10 and the other for 50¢. I think most of those 1950s-60s issues were reprinted in the 1970s.

I don’t think “The DQ” is interested in character licensing any more, they seem to be aiming for the apparently lucrative hip young adult market. Their offerings are now less ice cream specialties, though they still have the “Blizzard” cups,  but now they emphasize  the usual fast food fare.

Dennis was once closely associated with Dairy Queen just as much as Ronald McDonald would be connected with McDonald’s.  Without him, DQ might as well be Red Robin or Checker’s. Just my humble opinion. I miss Burger Chef and Gino’s.

I’ll rustle up some more Dennis stuff soon.  Ketcham was one of my favorites, too.

Good to hear from you. Because Dennis was so popular so fast, my guess is that Ketcham was probably doing so many freebies and request art, he probably didn’t bother keeping track of it. We collectors have to do the treasure hunting.

You mentioned Dennis in his Sears Roebuck catalogue appearances, I was tempted to use some last week, at least a promo for it. They encouraged kids to paw through said catalogue in search of a specific Dennis image embedded somewhere within, as a possible prize or a discount was on the line. Kids would be there anyway, especially around Christmas time, looking for toys they might want. Now there’s no more catalogue to worry about.

The U.S. Marvel Dennis comics were regular size books, the Brit version was, as seen, a bit larger. The cover paper isn’t slick like the American one either. It has a sort of a thin, dry feel to it.

I don’t know why you need to see that Snuffy strip, it was highly unremarkable. But, I’ll see about finding a spot for it.