I’m a pretty geeky guy — having been a collector all my life. My studio/library is chock full of old books, vintage toys, model kits and assorted pop culture “junk.” When I took over the writing on the REX MORGAN strip, one of the stories I wanted to do was to have someone find a stash of valuable collectibles hidden in an attic. There have been a number of stories about hidden collectible items in homes over the past few years — movie posters walled up as insulation — a bag of baseball cards in the corner of an attic — all worth a fortune. For my story, I picked comic books and hid them in the Morgan’s attic, and tied that into a plot about a 92 year old cartoonist and his son. The comic books were all inspired by the EC Comics line of the 1950s — in my version, its “VC Comics,” and the titles include TRUE CRIME GANGSTERS, OLD WEST GUNFIGHTS, and the horror “classic,” TALES OF THE CREEP! Admittedly, it’s a bit self indulgent to work my collecting obsession into the strip — but after waiting until well into my 50s to finally write my own strip — a life-long goal — I hope I can be forgiven for a little self-indulgence in my first story! The geekiest moment of this tale so far? Working in a no so thinly veiled reference to a horror and sci-fi movie director who is a well-known collector of monster/horror memorabilia.

Geeks fill Griffy with fear and loathing, On the other hand, Zippy welcomes them into his world so he can poke fun at them. By the way, I’m old enough to know the original meaning of “geek”–the meaning I used as a kid. Geeks were circus sideshow performers of the lowest variety—their “act” consisted of biting the heads off of live chickens. The ultimate in pop culture geekdom was Tyrone Powers’ portrayal of one in the 1940s film, “Nightmare Alley”.

Many years ago the Press Club in Washington DC asked Milton Caniff if he could get some cartoonists to put on a show for one of their luncheons. I was one of the cartoonists Milton selected. I was very young, very flattered and very geeky but I agreed to perform.

President Lyndon Johnson heard we were doing a show and invited us to drop by the White House for a visit before our show. I felt very geeky standing in front of the President’s desk while he and Milton talked. When it was time to leave, Milton asked the President if he’d like to come to our luncheon. The President said yes in spite of his aids insisting he had other appointments, and he walked down the street several blocks to the club.

I love all kinds of comics and cartoons, but I especially geek out over everything Walt Disney! Ever since I was a kid, I have been a huge Disney fan. I count Disney as one of my biggest cartooning influences. I especially remember loving 101 Dalmatians and The Jungle Book at the theater. And thoroughly enjoying watching The Wonderful World Of Disney every Sunday night while eating a Chef Boyardee Pizza with my brothers when we were growing up! It was must-see TV for us! I have family in Orlando and I have been going to Walt Disney World since the early 1970’s. In fact, from the time I was in 8th grade until the summers during my college years, I spent a large portion of each summer staying with my uncle and aunt and cousins in Orlando working and going to the parks as often as possible. One summer I even worked in a Downtown Disney (now Disney Springs) hotel! I still try to visit Walt Disney World at least once a year with my wife and daughters. My daughters are major Disney geeks just like me! This photo of Goofy and I was taken in March when we ate at Chef Mickey’s in The Contemporary Resort. He is one of my all-time favorite characters. I am proud to be a Disney geek! 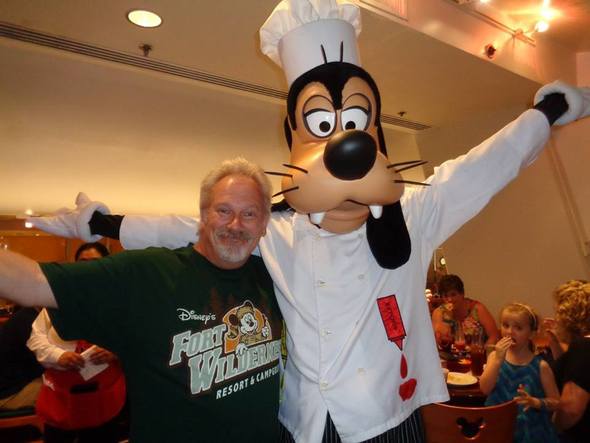 I love Edward James Olmos. Blade Runner, Miami Vice, and especially Battle Star Galactica made me a huge fan. So I was freaking out when we were both guests at the 2010 Dallas Comic Con. I really wanted to meet him, but he had a really long line, and I needed to be at my table. I expressed my dismay to Mark Walters who ran the con, but then forgot about it. I was sitting at my table sketching when I heard someone say, “Hello, June”. “Hello, Ed” I exclaimed. It was him. Captain Adama. What a lovely man. I was totally geeking out ! I am forever grateful to Mark Walters for arranging a meet and greet with one of my favorite actors. 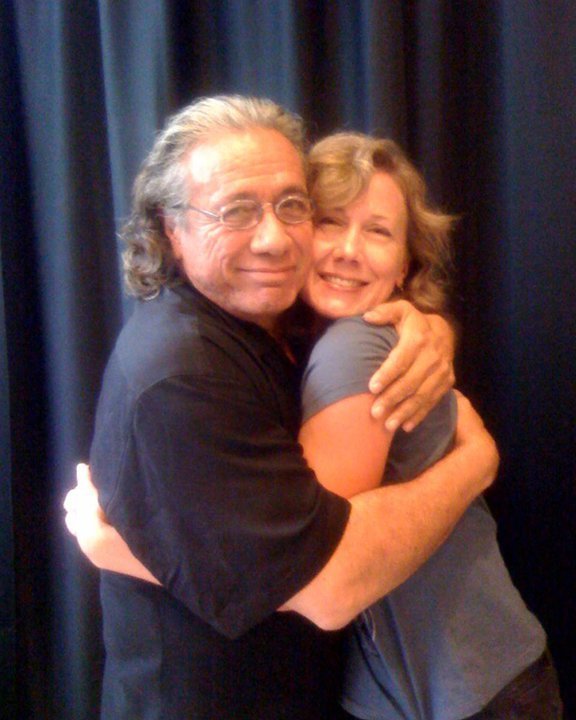 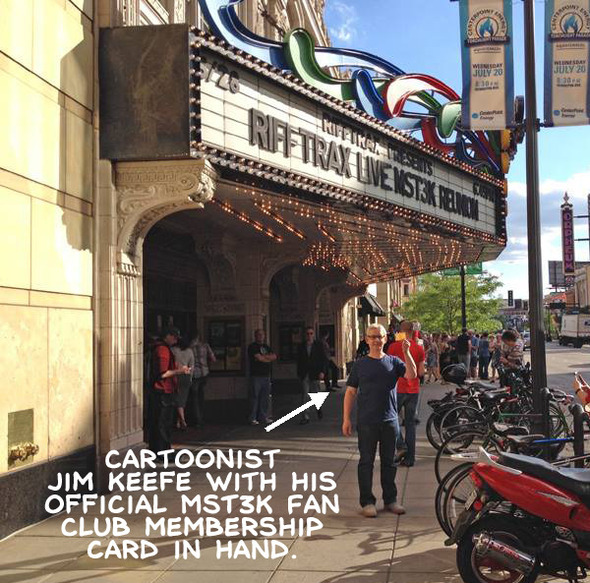 This woolen Yoshi belongs to my son, but I have it on my desk just for fun. I decided to pose him in front of a recent landscape painting I did, and I think he looks right at home.

“Every day is Embrace Your Geekiness Day in my comic strip ‘Intelligent Life!’

I get to have so much fun geeking out with my characters, and it’s often based on my own experiences! For example… back about 10 years ago, when I was creating “The Trek Life” for STARTREK.COM, the official Star Trek website, I was invited as a guest to many conventions, and had (and still have) the chance to hang around a lot of sci-fi and fantasy actors, including all of the Star Trek stars, given my work for CBS/Paramount. One day I was due to go on stage and speak to a large crowd at the mega-Star Trek convention in Las Vegas, and I was due to go on right after William Shatner and Leonard Nimoy. I went back stage early to hear their talk before I was to go on, and got there early, and they were both standing there, talking.
I was the only other person in the backstage area, and Leonard Nimoy called over to me and said “You there, young man… would you come over here for a moment?” After doing the self-pointing ‘Who, me?’ thing (again, only other person therrrre), I walked over to them and Mr. Nimoy proceeded to tell me that he and Mr. Shatner were having a discussion about black and white photography compared to color for certain subjects (Mr. Nimoy was a great photographer as well), and he wanted my opinion on some things they were discussing. He then asked me why I was standing backstage alone, and I told him I was a cartoonist and that i was due to go on after him, and mentioned what I did for STARTREK.COM, and he took great interest in asking a lot of questions about cartooning and relating them to photography and even a love and passion for horses, which is Mr. Shatner’s passion outside of acting.

As I was engaged with the conversation, it hit me, suddenly, about 10 minutes in, that I wasn’t just holding a conversation about cartooning, photography and horses with a couple of ‘regular guys,’ but with William Shatner and Leonard Nimoy, Captain Kirk and Mr. Spock, who I had obsessively admired since I was a kid, both personally and in their respective rolls. And the moment I realized that I totally geeked out, and nearly freaked out (I was new to the convention scene as this convention was my first Star Trek con where I was an actual “guest”).

When it was time for me to go on stage after them, I was so geeked out that I nearly forgot what *I* was there for!

When I stepped off stage towards backstage, after my own talk, there stood Patrick Stewart (Captain Picard), Jonathan Frakes (Commander Riker) and Brent Spiner (Data), and well… more GEEKING OUT ENSUED.

For me, and the characters in Intelligent Life, geeking out is simply a way of life! And in the words of Worf, and I paraphrase… ‘Today IS a good day to GEEK OUT!'” 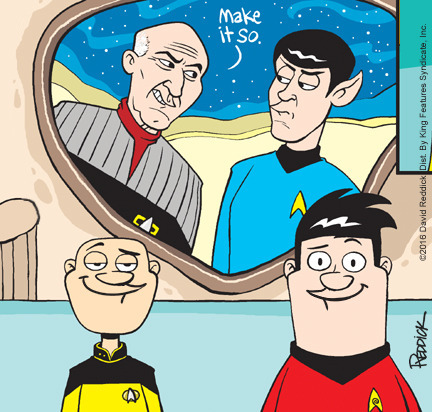 I’m a massive Star Wars fan and wrote this one for May the Fourth.

As we can see in this Ketcham Klassic, even Dennis had fears about being labeled a NERD! 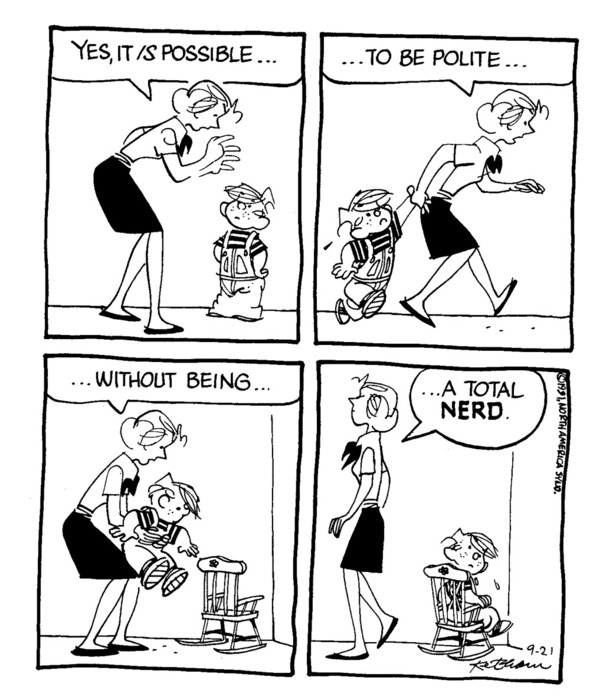