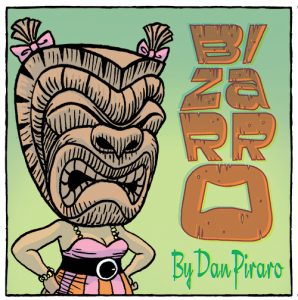 (For some real good embiggenation, click any image with your clicker deal.)

Bizarro is brought to you today by Words of Wisdom From Yesteryear.

Hey, Jazz Pickles. Sorry for the delayed post, I’m out of town and things are wonky.

The cartoon above is a pun on the Uber phenomenon, which has revolutionized the taxi industry; cheaper and more efficient for the consumer, not a good thing for the traditional taxi folks. But that’s beside the point. The point here is a frivolous pun about Uber and goober. (Goober is slang for “peanut”.) The car is a Mercury Comet from the 70s. I like drawing vintage vehicles, especially oddball, goofy ones like this. The truck being used in this cartoon by Bunny’s Pie Repair is some kind of mid-century, British utility van that I found a picture of on the Interwebs. I don’t remember the name of it. Be sure to click on the image and embiggenate it to find the various background jokes and the secret symbols, which today number 7. 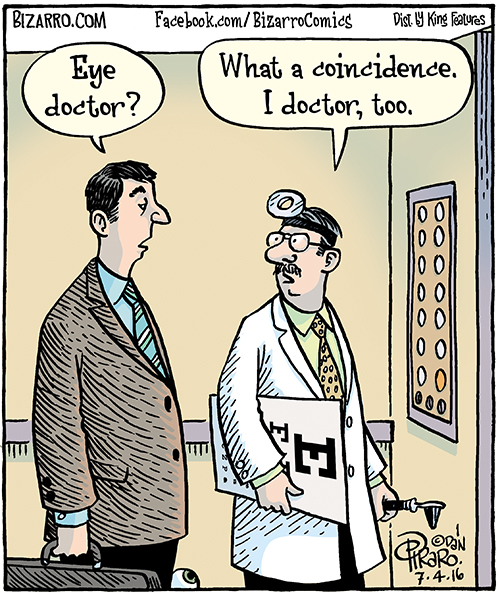 Here’s a goofy pun about doctors. One helpful reader informed me that eye doctors don’t use those mirror things on his head or otoscopes (that thing in his hand). Those are actually only used by ear, nose, and throat docs. Oh well. Good thing it’s a cartoon and not an illustration in a medical school text book. 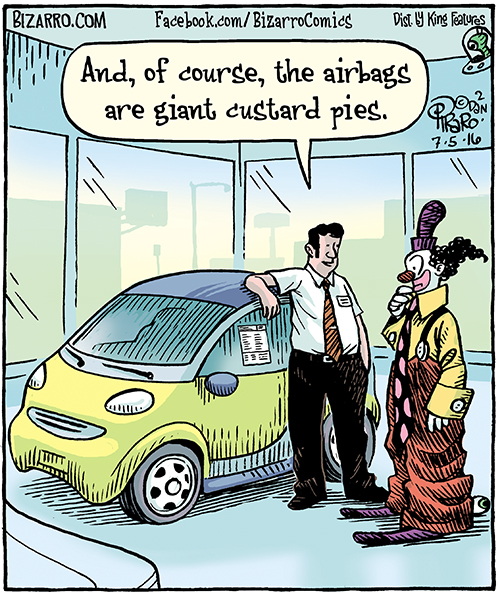 I’m not against small cars, in fact, I’m totally for them and hate to see people using gigantic cars that they don’t really need most of the time. But it occurs to me that Smart Cars are perfect for clowns.

Some readers thought this cartoon about good and bad cops was intentionally written and published in response to the various police-related tragedies of this past week. As I’ve said many times, my cartoons are submitted and dated for publication four weeks in advance, so, no, I did not intend the coincidence, but these days you’d be hard pressed to publish a cartoon like this at a time when it did not coincide with one of these events. I was accused by one reader of criticizing cops unfairly but I don’t see how that’s true here. I’m clearly not saying all cops are bad, only that some are and some are not and you can’t tell the difference until it’s too late.

Cops are human beings, and so they’re going to appear on every point of the spectrum between good and evil, just like the rest of us. Assuming all cops are good is as dangerous and inaccurate as assuming all cops are bad. I’ve had almost no bad experiences with cops, but I have to consider the fact that I’m a middle-class white person. If my skin were darker, my experience would likely be different. A recent poll showed that more than half of white Americans (fifty-something percent, can’t remember the exact number) believe that cops treat all people the same. This, in my opinion, seems blatantly untrue, and I suspect that percentage will be dropping after all the publicity these kinds of events are getting. Racism is not dead in America––far from it.

Here’s my one bad experience with cops: Back in the early 90s, I attended an exhibition soccer game in Texas with my best friend at the time. He was a Mexican national (with legal residency status in the U.S.) and the game was between Mexico and Scotland, so folks supporting each team sat on different sides of the field. He was there to support the team from Mexico, so we sat on the Mexican side of the stadium. (The fact that virtually all white people sat on the “Scottish side” was notable, I think, but that’s another matter.) The cops on the Mexican side of the stadium outnumbered the cops on the much larger, white side of the stadium by three to one. Though there was nothing violent or outrageous about anything the folks on my side of the field were doing, each time the Mexican fans cheered, the cops guarding the our side were aggressive, unreasonable, and insulting, banging their nightsticks on the metal railings and insisting the crowd quiet down.  I was not used to being treated this way by the police so I calmly objected to being told not to cheer at a sporting event. The cop I spoke to pushed me down into my seat, leaned into my face, and threatened to arrest me. I sat down, shut up, and nothing came of it, but I hated it and it gnawed at me for days. It was the one time I experienced for myself what minorities in the U.S. have reported for decades. Actually, for the entire history of our country. I don’t know how to solve the problem, but it’s certainly something that needs to be addressed in a big way. 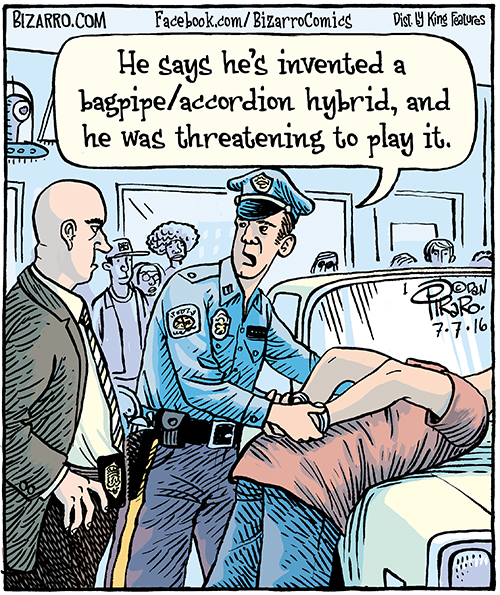 Another cartoon about cops for some reason, but this one is not political in any way. Perhaps accordion and bagpipe players will disagree. By the way, I enjoy both of these instruments, I only used them in this cartoon because so many people find them objectionable. 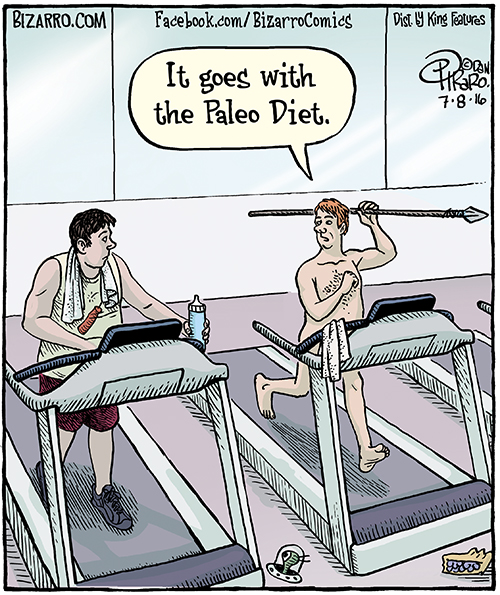 I like this gag about the naked guy running with a spear. I enjoy reading books about anthropology, so this kind of gag is common for me. I’m currently reading The Social Conquest of Earth by E. O. Wilson. Good stuff.

This cartoon is built on a pun suggested to me by a longtime Bizarro reader by the name of Imad Libbus. He sends me pretty funny ideas from time to time and I suspect this isn’t the first one I’ve used, though my memory for this kind of thing is terrible so I can’t say for sure.  Being a HUGE fan of Theodore Geisel, I love this gag.

That’s it for this week, Jazz Pickles. Check me out on instagram (danpiraro) if you’re not already. Sometimes I post stuff there that I don’t put anywhere else. Also give a glance to my Tip Jar in the margins of this blog. Any donation or monthly contribution is much appreciated, no matter how small. Helps keep ink in the pen and food in my stomach.