It’s National SPLURGE Day! What a great day for those of us who are able to spend a little money on ourselves to take advantage of!

I asked our cartoonists about their own personal splurges or their dream-splurges!

The urge to splurge is the “national pastime” in Dingburg, Zippy’s beloved home town. Good thing money grows on trees there.

I’m not sure if this EXACTLY fits in with this week’s topic, but it’s always been one of my favorite early Ketchams. 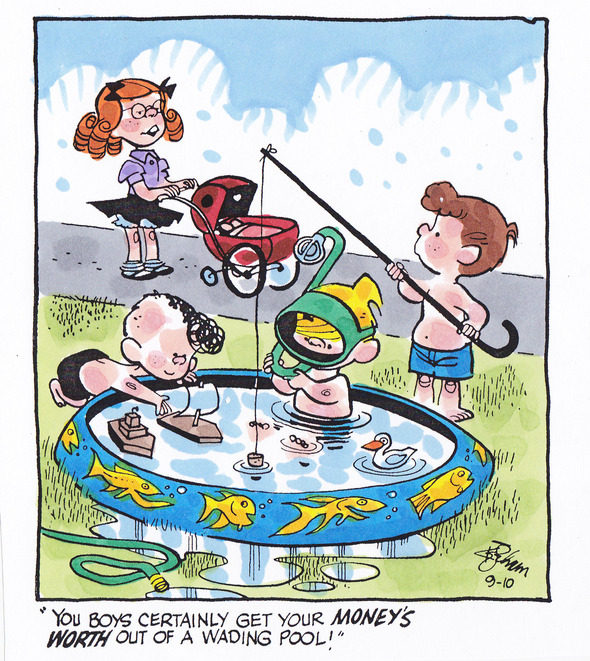 When my brothers and I were young, my Dad owned a 1965 Ford Mustang. We truly loved that car and went everywhere in it. We have many wonderful memories of that car including one that happened many years before seatbelt laws were ever in effect. My Dad was the coach of our little league football team and one evening, after practice, many players did not have a ride home. He volunteered to give all these players a ride home! At final count, we had 13 people (12 players in uniforms and pads and my Dad) in that Mustang! We were all crammed in that car, laughing and having fun! Dad got everyone home safely that night! If I could splurge on one purchase, it would be buying a classic red 1965 Ford Mustang. That explains why many years ago, I had a lot of fun with this Sunday Page, especially drawing Snuffy Smith’s mule, Aunt Sukey driving a 1965 Red Ford Mustang!

National “splurge” day? What a GREAT idea and I have the perfect splurge! I am attaching three photos of my “splurge”

All of my life, I’ve dreamed of owning a Lotus Esprit twin turbo V8! I was recently talking to a friend and was discussing buying one of the cars (the manufacturer stopped making them in the early 2000’s and now that they are all “used cars” the prices are considerably lower than they were when the cars were brand new). My friend suggested before I buy one online, I go see one and see if I actually fit in the car. Now, I am a big guy – 6’4″ – 240 lbs, and I am aware these are small cars. So, I found one online, nearby in Charlotte, NC. I informed the seller of my situation and he invited me to come “try it on for size”. My wife and I hopped in the car and drove over to Charlotte … about 4 hours later I was standing by a 2000 blue Lotus Esprit and although it was a little “snug” once I got in it, I made up my mind that I would buy one… someday. This one just wasn’t the right color! I want a yellow one!

My big “splurges” are musical instruments … My current lineup include a Yamaha baby grand piano, Keilwerth SX90R alto sax, various ukuleles (mostly sopranos) and several Hohner chromatic harmonicas. I previously played alto, tenor and baritone saxes and the bass clarinet in various groups and venues.. These days, I’m mainly playing the ukes with the River City Ukulele Society here in Richmond, Virginia. And I must say I have a very understanding wife who indulges my musical whims … of course, she gets something out of it … it gets me away from the drawing board and out of the house from time to time!

If money were no object, and I had unlimited amounts of it, I would publish my own magazine, and have all my favorite cartoonists, and storytellers in it. They would be paid handsomely for their work, and I would get the best people to curate it. Every month there’d be comics, pulp fiction, drawings, and gag cartoons. It would be called “Piccolo Mondo” which in Italian means “small world”… a perfect title when you think that all we do as creators is create small worlds for other people to enjoy, and take part in. Every month there would be themes, and I would fly my contributors all over the world in awesome jet planes equipped with art supplies, and recording equipment. The inaugural issue would feature the making of a collaborative 75 mile long comic strip, drawn on a meadow, so that astronauts could read it from space. That’s my splurge! Anybody out there want to give me a couple of billion dollars to start it up?
Here’s a doodle of the prototype: