Ask the Archivist: ROOM AND BOARD, Part II 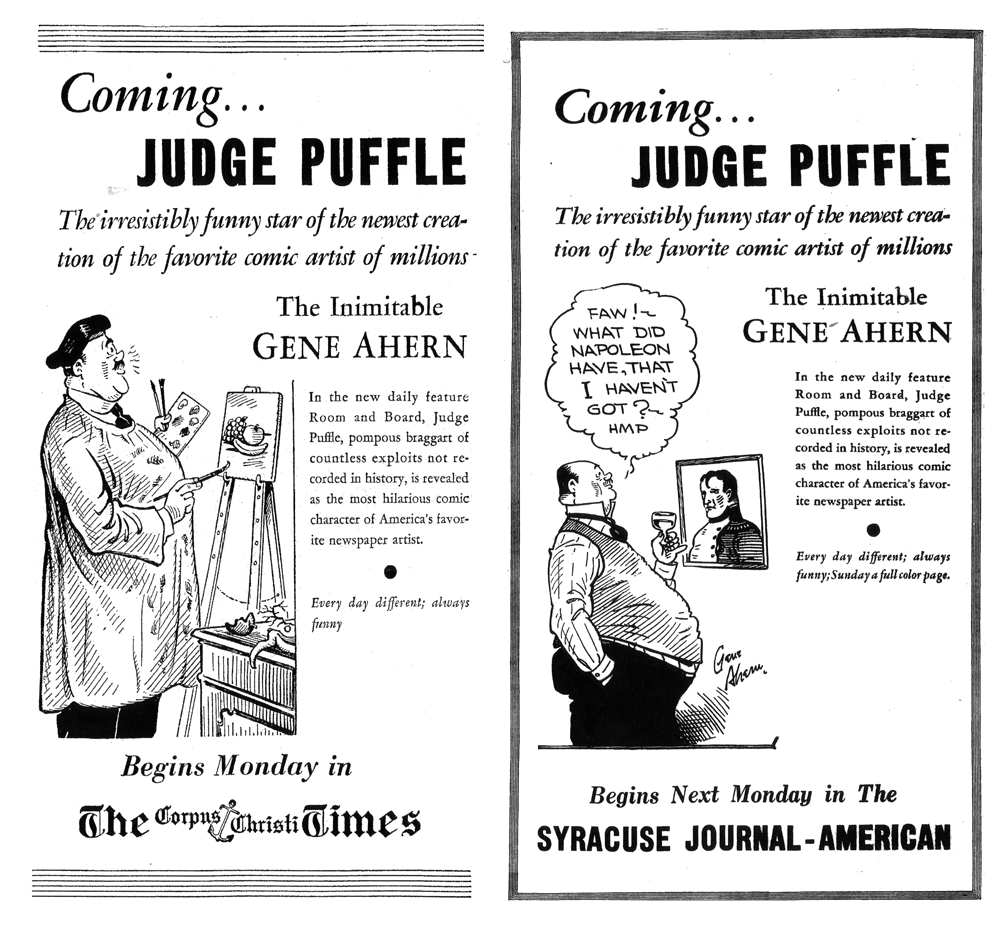 Welcome to the archives. Last week we unearthed a long-forgotten precursor to Gene Ahern’s Room and Board, a panel that shared the name, but was not the same item. This week we opt for the real thing.

The original version was created in 1928 as a King Features answer to NEA’s Our Boarding House, by Sals Bostwick. It didn’t last long after its creator died suddenly in 1930, and went through five more cartoonists and a demotion to the Central Press imprint before it was cancelled in mid-1932.

In 1936, the longtime contract that Gene Ahern (1895-1960) had with NEA was about to end, and we enticed him over to our side. Of course we would have wanted Major Hoople and his castmates to come along with him, but NEA owned them, not Ahern, and they weren’t going to sell one of their star properties, which they’d had since 1921.  (And would continue with other artists until 1984.)

Once, when artists jumped from one syndicate to another and the feature they were famous for couldn’t, they’d get around it by putting out the same strip, with the same characters with a new overall series title. For instance, The Newlyweds and Their Baby became Their Only Child, Little Nemo in Slumberland became In the Land of Wonderful Dreams, or most famously, The Katzenjammer Kids became The Captain and The Kids.

But, by this time, the copyright laws were more precise. The actual characters, by name and appearance, were owned by NEA. So Ahern had to produce a duplicate series that had to be different at the same time. His equivalent to the Major was Judge Puffle, who was virtually the same guy. Both are fat windbags who can’t stop plotting, lying and dodging work. He’s even of British origin, like Hoople, with the Judge even sporting a plaid cap, like he’s from a Highland regiment.  So it’s natural for him to recall (or make up) adventures in the Boer War. I mentioned last week that Windy Wicket in Bostwick’s version also placed himself there. That might just be him borrowing from Major Hoople.  I wonder if they’d all show up for a Mafeking reunion dinner.

The natural choice of a title for the new Ahern panel would be Room And Board, which not only was remarkably similar to Our Boarding House, but we already had that name under copyright, left over from the old series.  I don’t know why, but in some papers, the name was “Judge Puffle,” just as the original version sometimes was retitled “Boarding House Foibles.”

So eighty years ago this week, Room and Board—the Ahern version—debuted. There was a lot of publicity over the launch, but the actual panels are very low key, no back story or anything. When Puffle speaks of his past, you’re invited to disbelieve it anyway.  The Judge and his milieu are so much like the Major’s, there’d be no reason for it. You, the reader are in on the joke-it’s the same strip with a facelift. 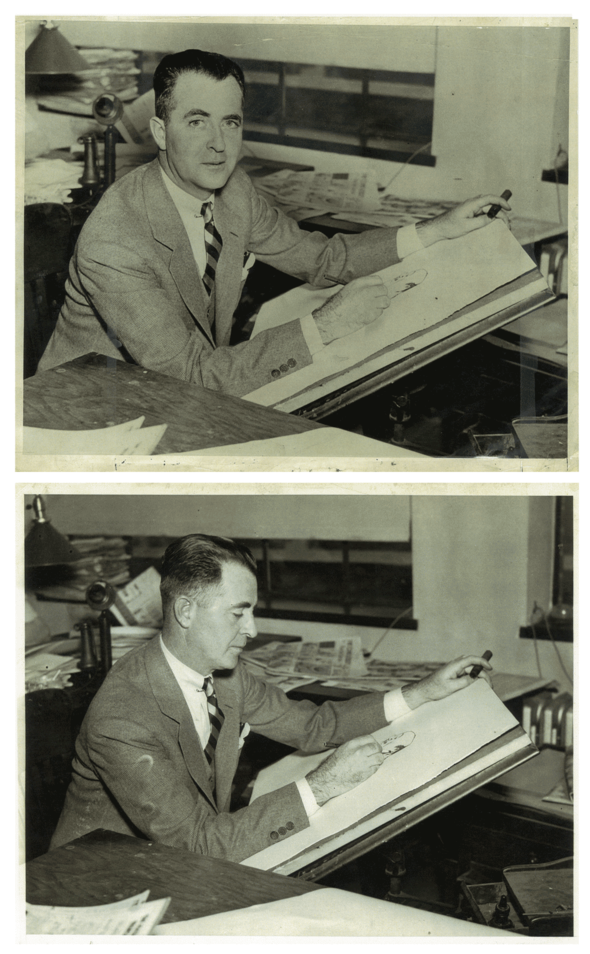 ABOVE: GENE AHERN in 1936 and BELOW: Two seconds later. He’s apparently at the
King Features offices in New York. Tossed on the table behind him is the
comic section of the New York American for 26 April 1936. 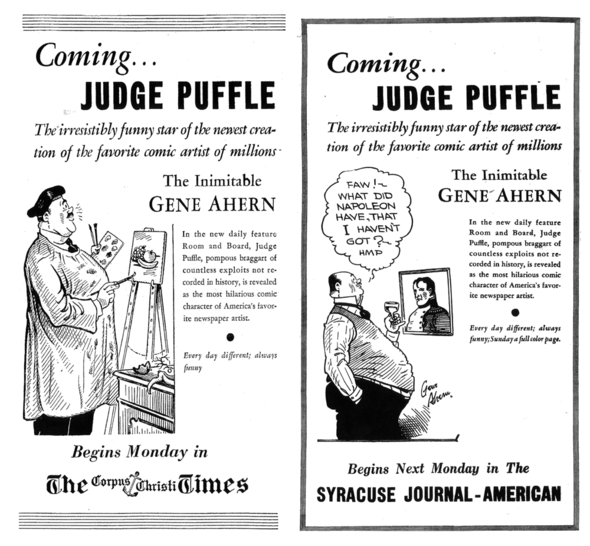 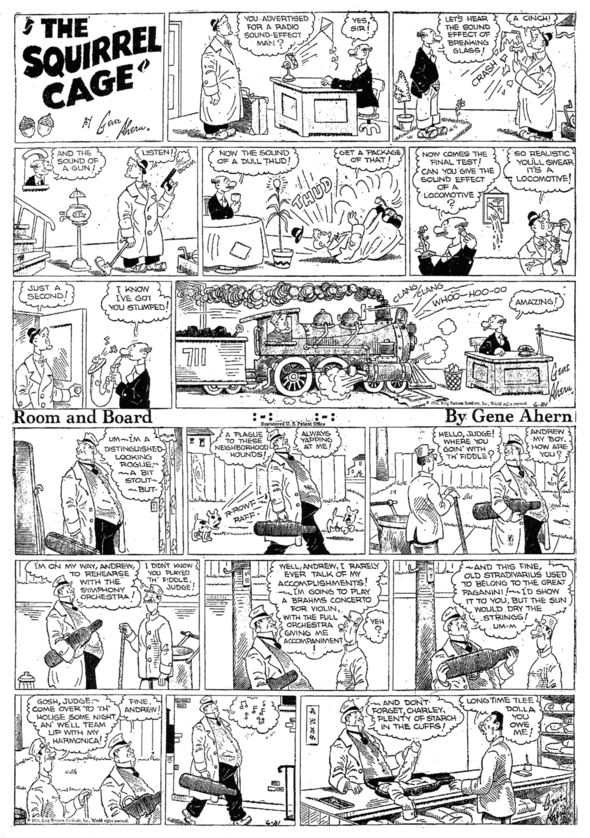 ROOM AND BOARD debuts its Sunday page, 21 June 1936.
Over at NEA, Ahern’s long-running top strip was “Ches and Wal, the Nut Bros.,” who would do some screwball vaudeville patter while their locations and what they were occupying themselves with changed from panel to panel. “The Squirrel Cage” was similar.

Much like Our Boarding House, Room and Board is a long saga of lowlife behavior on the part of our main protagonist, from casual acts of theft to fantastic stories designed to extract some coin from the gullible occupants of the boarding house. His sour old wife, Delia, does most of the work and general upkeep of the house, never letting Puffle get his hands on the money or be given any responsibility.

The Judge is perhaps seen as feeble-minded by her; he’s certainly untrustworthy—pretty much good for nothing. He often dreams of either achieving greatness with eccentric inventions or harebrained schemes, just as he often reels off the most absurd Munchausian tales of his former exploits, always laid on so thick that nobody but a small child or an idiot would accept them.  There are few children in Puff’s world, but lots of idiots.

He invites a long parade of fellow con men, loafers and moochers, some being family members, into “Puffle Towers,” – all being objectionable to Mrs. Puffle. One of the more memorable, and a favorite of Ahern’s, was “Two Gun Terry,” a wacky Old West charlatan, who would return to the series through the years. With Ahern’s declining health, and most of the last years obviously done by ghosts anyway, the panel ended in 1958,. Here’s a taste of the series from its first year. 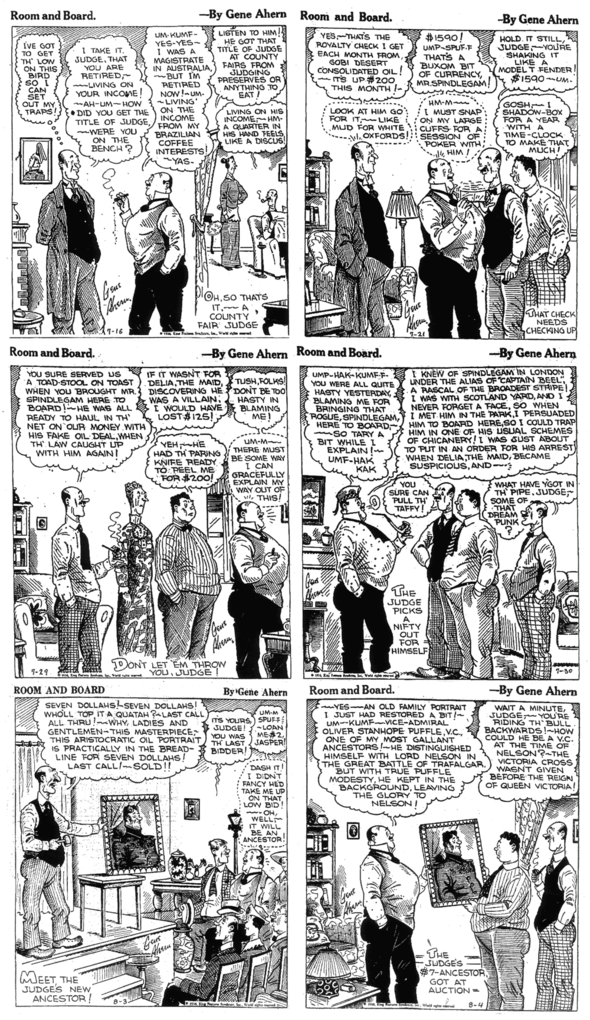 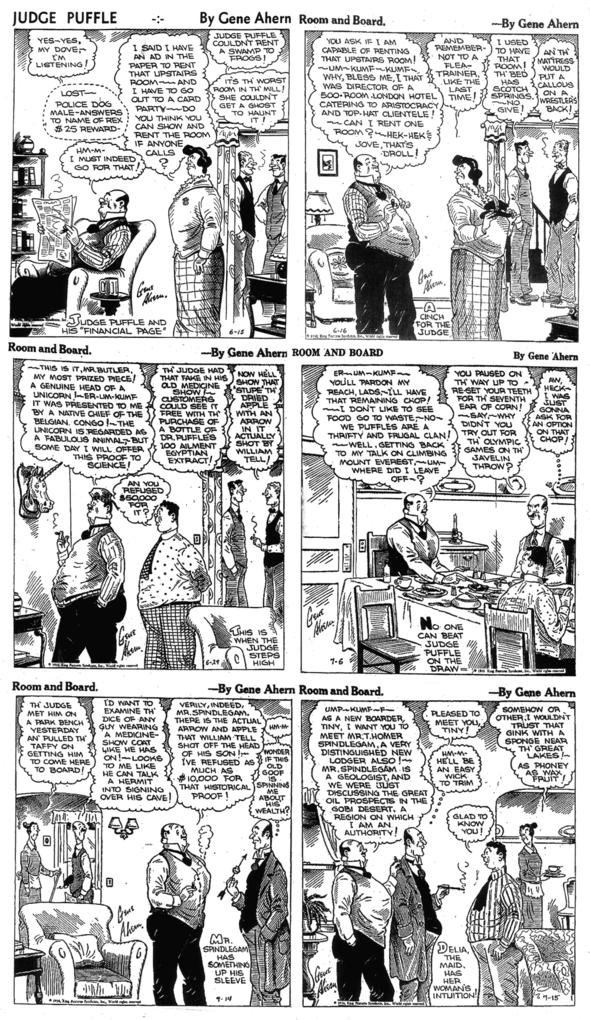 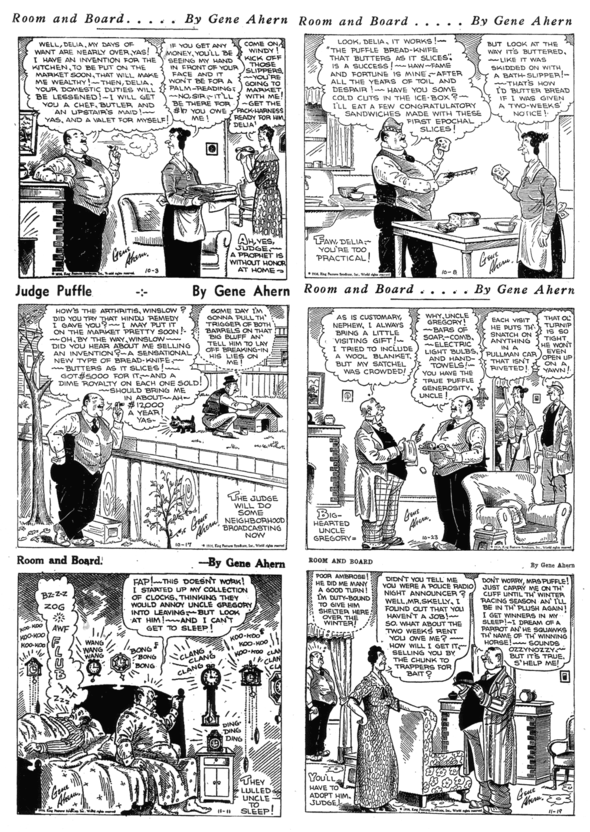 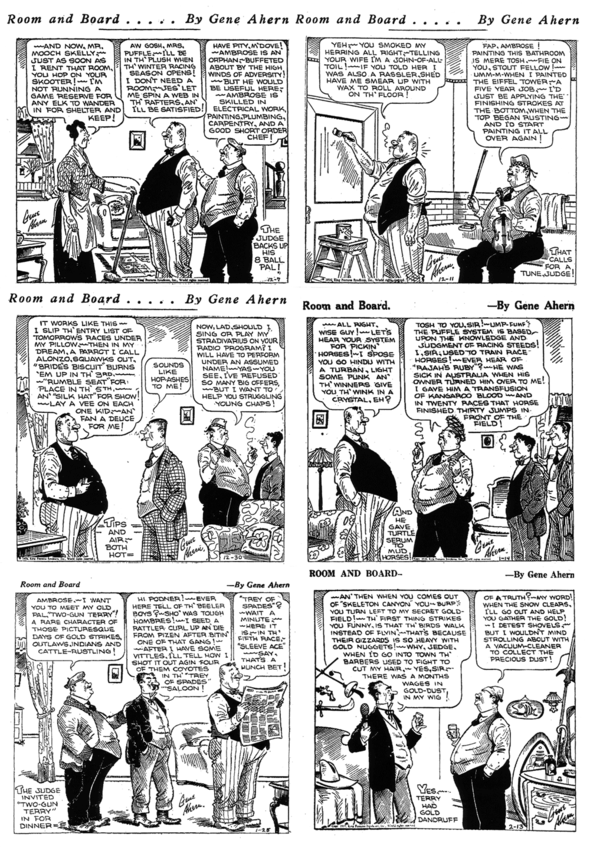 Hope you will enjoy today’s entry on the better-known incarnation of Room and Board. I will do one about “The Squirrel Cage” sometime soon.

Today’s entry focused on the early Ahern version. Hard to compare? Next week I’ll offer a panel that was similar again, but extremely obscure and enigmatic at the same time.

Thank you for your encouraging comments! It’s good to know I’m getting it right at least some of the time. To answer your questions, yes, both versions of Room and Board used continuities, or maybe one might call them short-theme series. Obviously an adventure continuity one frame a day could never work, but comedy can work sequentially one humorous incident at a time. Now you could define many comics, including Room and Board, as a situation comedy, with stories and characters required for it. The only way to use them is to give them a short run apologue where the characters work things out in their unique styles. Thus you see a few fragments from some stories above.

The second question asked was “Nov Shmov Ka pop?” Now, before you think Mr. Mansell has suddenly resorted to speaking in  Czechoslovakian anagrams, the phrase comes from this week’s hero Gene Ahern’s strip, “The Squirrel Cage,” which picked up along the way a small, mysterious, hitchhiking man who would only exclaim “Nov Smov Ka Pop!” somewhere in the strip. He had no name, but did have a long beard and an odd striped hat that looked like a dome off a Kremlin tower. I take it that Mansell would like to see a look at the Cage, and we’ll offer an entry soon.

“The Future of comics is in the past.” Good quote.

Whom are you quoting — Criswell? Mr. Toad?

If it is true, maybe we can soon look forward to a sixth artist for Windy Wicket & Co.

Sorry, but there just isn’t any way any version of Room and Board we could get into the vintage section.  We have nowhere enough files to make it worthwhile. Our predecessors sometimes left some pretty incomplete chronicles. I envy The Phantom!