It’s Best Friends’ Day!  We owe so much to our friends, so I asked our cartoonists to share their feelings about friendship!

Clearly, friendship is a good thing. A very nice thing….so very nice, in fact, that the niceness of it triggers an eruption of Mr. The Toad in me—-

Jughaid’s best friend is Jamey and I really enjoy drawing the strips they appear in together. Often, they are getting into trouble in school or plotting together about causing mischief. I especially enjoy drawing the strips when they are playing outside and having outdoor adventures, like rock-hopping, climbing trees and hanging out in their treehouse. They remind me so much of my two brothers and I when we were children.

My best friend in high school was a guy named David Hornaday. We did everything together and had a great time even though he had his faults.

I drove by his house one morning to take him to a golf tournament. His mother said he was still in bed so I went to wake him up. When I spoke to him he just rolled over, turned his back to me and went on sleeping, so I lifted his cot and poured him out on the floor. He just grabbed his pillow and went on sleeping.
I said to him, “David, you ought to be in a comic strip.” That stuck in my mind and when I created Beetle I used David as the inspiration…a slim, likable guy who
likes to goof-off. It made David famous in his home town and they ran his picture on the front page of the newspaper along with a cartoon of Beetle. I don’t know if David liked it but he had to llive with his creation.

Dethany and Fi are friends…in the most expansive usage of the word.

And yes, Fi really does have a Facebook pagenow: https://www.facebook.com/FistulaBreech/

My best friends are people who put their phone away when we meet up.

In this wistful daily panel, Hank really captures the timeless friendship between Dennis and Mr. Wilson. 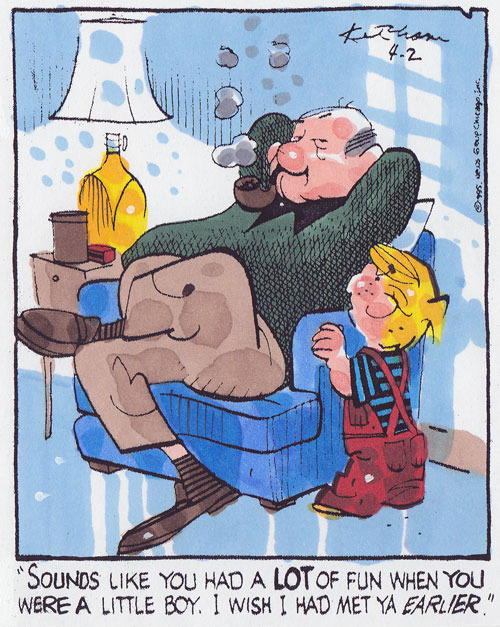