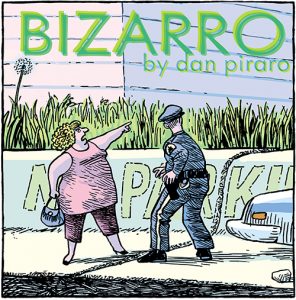 (For readers who wish to embiggenate these images, click any blue-colored thing.) 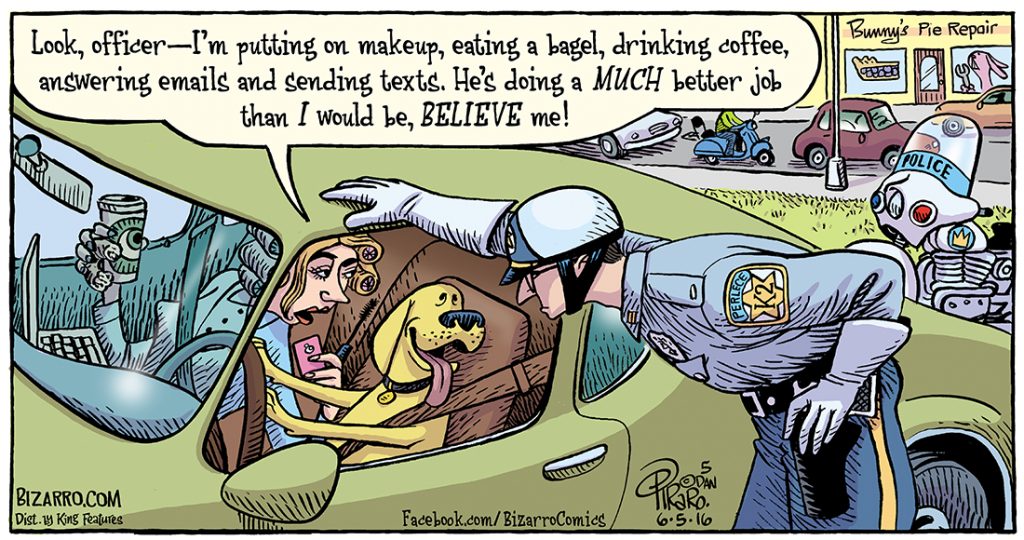 Bizarro is brought to you today by Perhaps The Best Option.

Here’s a fun take on distracted driving, which has always been a major public safety issue and is getting worse all the time. It is estimated that over 600% of all accidents caused by teenaged drivers are the result of cell phone use. No, that math does not make sense, but teenagers aren’t any good at math, either, which is another big problem with this country. How are they going to repair the desolate wasteland we are leaving them if they are too busy texting to do the math? See what I’m saying?

In the background of this cartoon is a nice shot of Bunny’s Pie Repair. Bunny won’t live forever and who is going to carry the necessary business of pie repair forward into the rest of the 21st century––some millennial dressed up like an imaginary super hero on their way to Comic Con, crashing into cars and pedestrians as they send selfies of their private parts to politicians? I think you get my point. We’re in trouble, people. 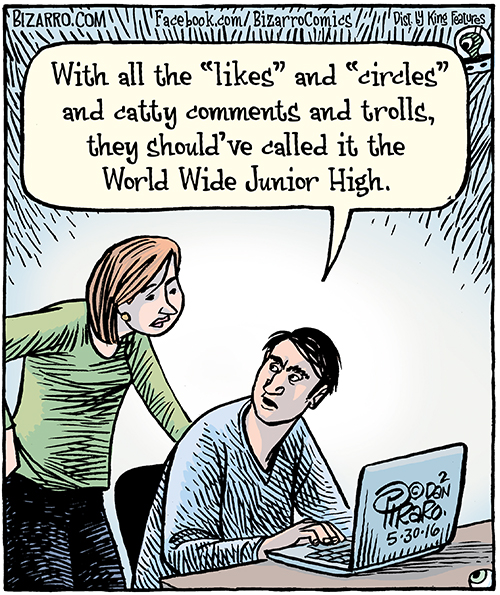 Well, apparently I’m on some kind of rant against the Interwebs this week. Well, if you can find a better target than this technological vampire that sucks so much life and time out of our daily existence, let me know and I’ll rant against that, too. It occurred to Olive Oyl and me lately that the Internet makes us feel like we’re not as popular as other people, that a lot of things are going on that we know nothing about, and that we might be attacked by an ignorant, unfeeling jackass at any moment. Just like junior high school. There are billions of examples from the Web that make this point , but the similarity between Donald Drumpf’s tweets and the childish pronouncements of an adolescent bully is certainly a prime one. 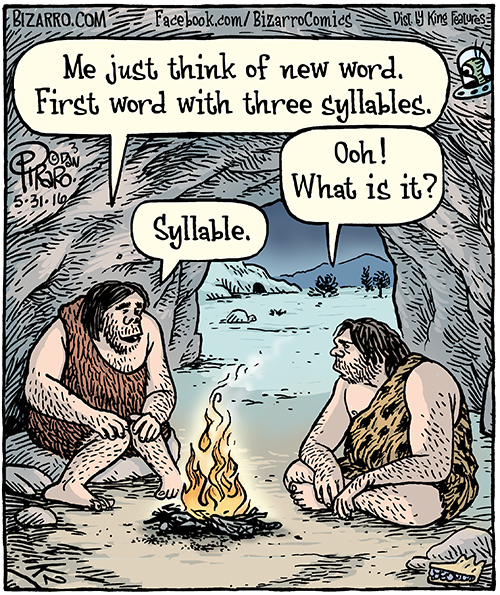 One thing cave men are always good for is a bit of word play. I’ve always been interested in how language among humans developed, as you can see from this Bizarro cartoon from the past. I hope to speak a language myself, one day. The only thing holding me back is that there are so many words you have to memorize. 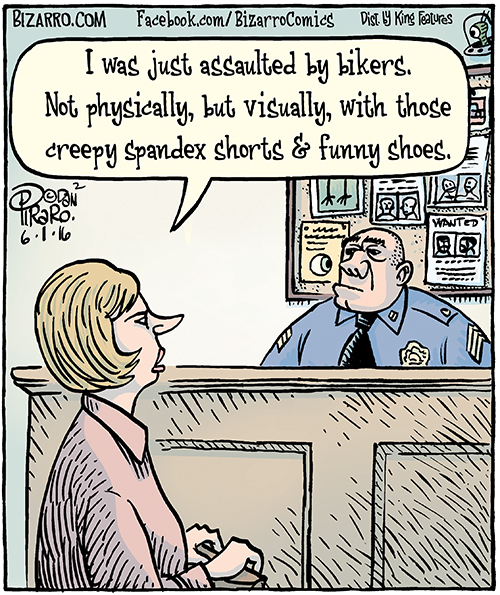 I used to ride a bike a lot back in the 90s and actually wore cycling clothes for a while. (If you clicked that link, give yourself a moment to stop shuddering.) When you’re into the sport, you begin to lose perspective on how truly alarming the clothes are. It’s a slippery slope.  Here’s a fun cartoon from 2013 about a biker bar. 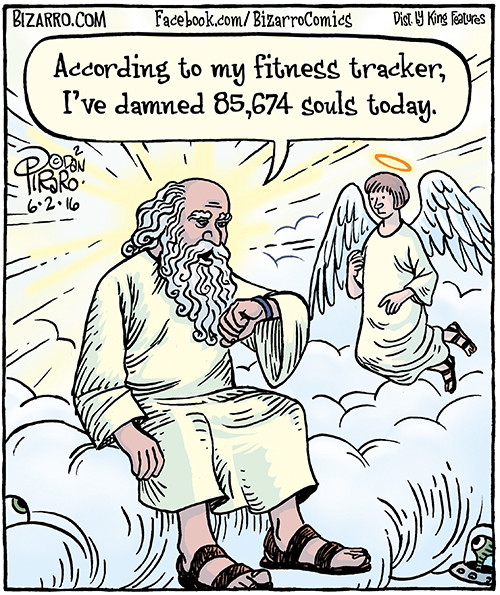 I got some grief from believers as a result of this god cartoon, as I almost always do. Many were quick to remind me that “god does not damn people, we damn ourselves”. I couldn’t agree more, but for completely different reasons than I assume they meant. Other readers wondered why an omnipotent being would be bald. My answer is that in a place where hospital gowns and Birkenstock sandals are popular, baldness might also be the Height of fashion. (Capitalization intentional.) 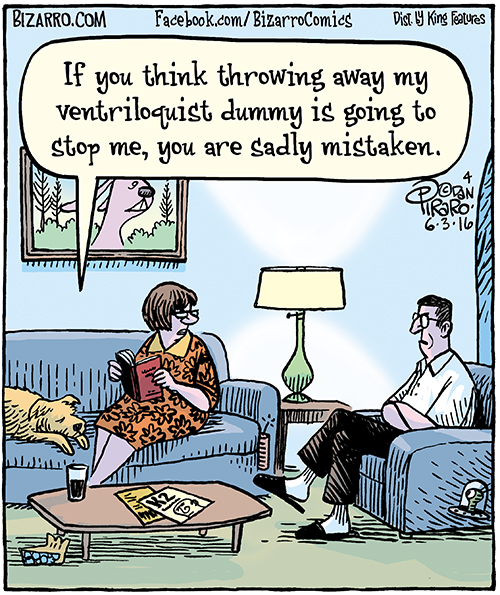 This ventriloquism gag is one of my favorite efforts in a long time. I love that it takes a few seconds to realize what’s going on, and also that it plays on that myth that ventriloquists can actually throw their voice to another part of a room. When I first drew it, the dog was awake and his head was up. That’s the version that printed in newspapers and appeared in the daily feed at King Feature’s site. I later decided that drawing the dog asleep works a little better because it more quickly removes the option that the dog is the one speaking. Here’s the original version. So I redrew the dog for this blog post and will use this version for all future uses. 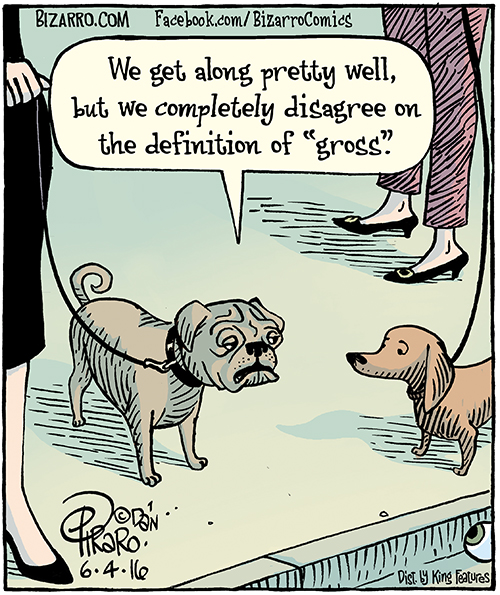 When I wrote this gag I thought it was clear but now that I see it weeks later, I notice it could be interpreted a different way. I meant for the dog to be referring to the woman with whom he lives, not the dog he is talking to. Dogs and people often disagree on what “gross” is. My dog, for instance, thinks placing her nose 1/4 inch from a fresh, steaming pile of the excrement of another dog is perfectly acceptable. In fact, she seems to think it is essential. Perhaps this is how dogs text each other. Thank god dogs can’t drive.

I deeply appreciate those of you who take the time to read my comments rather than just blasting through the cartoons and moving over to Twitter where Justin Bieber is discussing what he had for brunch. If you are one of these fine folks, bless you! If you’ve enjoyed my work over the years and would like to show your appreciation, perhaps toss a small something into the Tip Jar in the margin of this page. One-time donations or monthly contributions are much appreciated! Being a patron of the things you’d like to see more of on the Web feels good and benefits the Internet community upon which we all depend. Do not, however, view my cartoons while driving. If you must use your phone, let your dog drive.