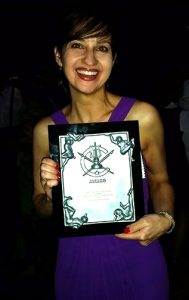 Well, some things are hard to top. This just may tie with my wedding and the birth of my children (but don’t tell that to my family).

It all started this past Memorial Day weekend at the National Cartoonists Society’s 70th annual Reuben Awards Ceremony, held this year in Memphis, TN. Originally, I was going to skip this year’s event and catch up on napping and Netflix, but I got “the call.” I was nominated for an NCS Reuben Award for Newspaper Comic Strip.

Hubby Mike and I packed up the kids (since grandma wasn’t around to watch them) and headed south. Many cartoonists arrived a day early to draw for patients and their families at St. Jude’s Children’s Research Hospital. My only regret is not being able to make it in time for that event. Heard it went beautifully.

Friday morning, Mike and I went to register for the weekend, when suddenly I was wrestled to the ground and forced to don a pig costume. That’s how they greet you at the Peabody Hotel. Not really. You see, the Peabody in Memphis is famous for its morning and evening Duck March (read about it here). There is even a designated Duckmaster. Today, the children’s book author/illustrator, Mo Willems, was the guest Duckmaster, and he needed someone to dress up as Piggie — from his popular “Elephant and Piggie” books — to help greet the kids.

Was I ever in the right time and place. NCS prez and Simpsons/Futurama comics extraordinaire, Bill Morrison, was already slated to be Gerald the elephant. I must say, we rocked our roles. Here are a few scenes. 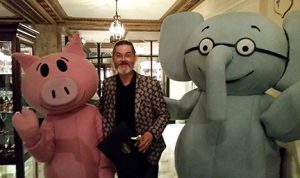 That’s Bill and myself flanking Mo Willems. He looks pretty astounded by our amazing ability to fit in the elevator. 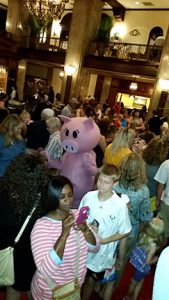 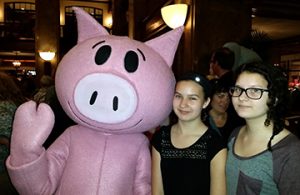 Yeah, those are my kids in the above photo. Look at those expressions. It was worth that sweaty, clunky hour just to embarrass them. 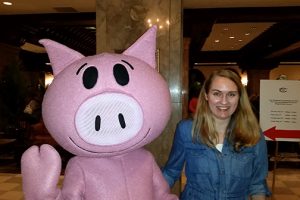 And here’s one of the fabulous Jenny Robb, curator of the Billy Ireland Library and Museum, escorting me so I don’t fall on my rather large face.

I thought THAT would be the pinnacle of my weekend. But it kept going. Saw some great presentations, and then Friday night was the annual welcome cocktail party (a.k.a. cartoony boozefest). Here are a few photos from the evening. 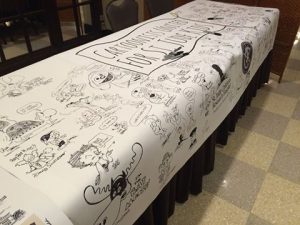 Large banner for cartoonists to sign for St. Jude’s. 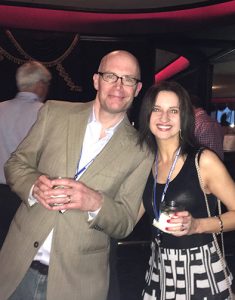 That’s me with the ever-sweet Lincoln Peirce (Big Nate). 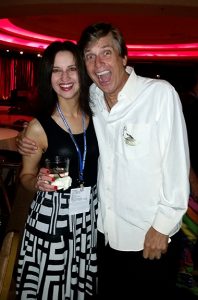 With the always enthusiastic Mike Peters (Mother Goose and Grimm/editorial cartoonist). Mike was the first professional cartoonist I ever met — in 1990 — and he hasn’t aged since. 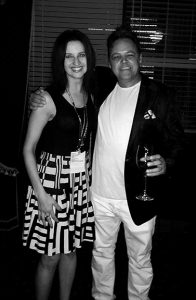 With fellow nominee, Mark Tatulli (Lio). Not sure why this photo is in black and white — but don’t we look elegant. 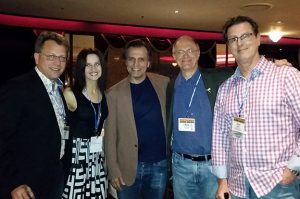 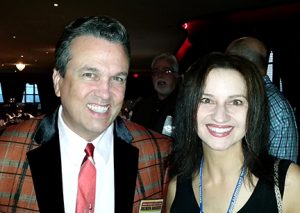 And there’s Bill Morrison and me in our “after” shots. A bit easier to hold drinks now.

Many long, boozy, karaoke-filled hours later, we finally collapsed. Saturday morning, our family took a detour and spent some somber hours at the National Civil Rights Museum. If you haven’t been there, I urge you to go. Deeply moving experience.

On a different note, I’ll spare you the full tragic story of Hair vs. Humidity. Let’s just say I learned a lesson about trying to get my hair done (for the awards banquet) in a humid climate and then walking 15 muggy minutes back to the hotel. I think we know who won. 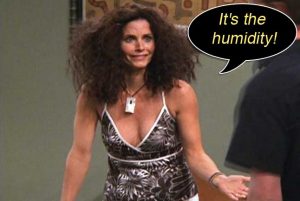 So, yes, Saturday night. I redid my hair, Terri-fashion (up), and hubby and I attended the banquet. What an evening. The Comic Strip category was announced toward the end. I heard my name, Mike mentioned I gave some kind of “yippy squeal” (fitting for a former piggie), and almost bawled. I didn’t, but I think I came close.

Here are a few scenes from that glorious night. 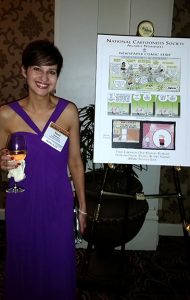 Pre-banquet cocktail hour (cartoonists have a lot of cocktail hours). Standing next to the board that showcases the comic strip nominees (Pajama Diaries, Pearls Before Swine, and Lio) . I refrained from drawing Sharpie mustaches on my competitors’ cartoon characters (you didn’t hear that, Mark and Stephan). 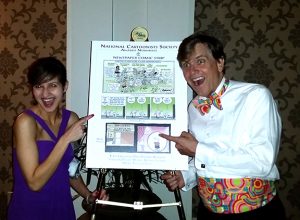 Hey look, there’s Mike Peters again. Not sure why we’re pointing at the other comic strips. I decided to make sure I always look as enthusiastic as Mike in photos from now on. His energy is pretty contagious, anyway. 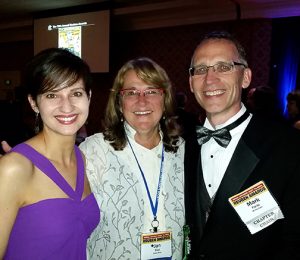 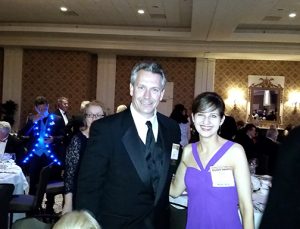 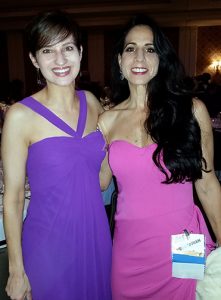 Looking a little like fashion twins, with Maria Scrivan (Half Full). 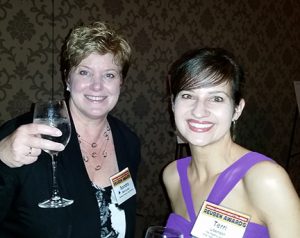 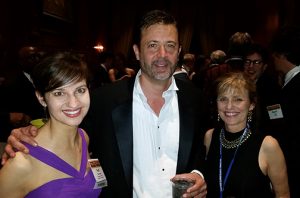 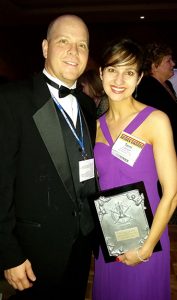 And finally, one with hubby and myself. Mike joked that I was going to bring the award to bed and impale him. I assured him it would have its own pillow and stay on my side.

As usual, there were many other photos that were simply too blurry to post, but hope you enjoyed these. It was an incredible night and still feels like a (good) dream.

For some extra reading pleasure, here is a list of this year’s winners and some other fun stuff (side note: Anton Emdin got the record for 3 wins. Well deserved!):