Ask the Archivist: ROOM AND BOARD Part 1 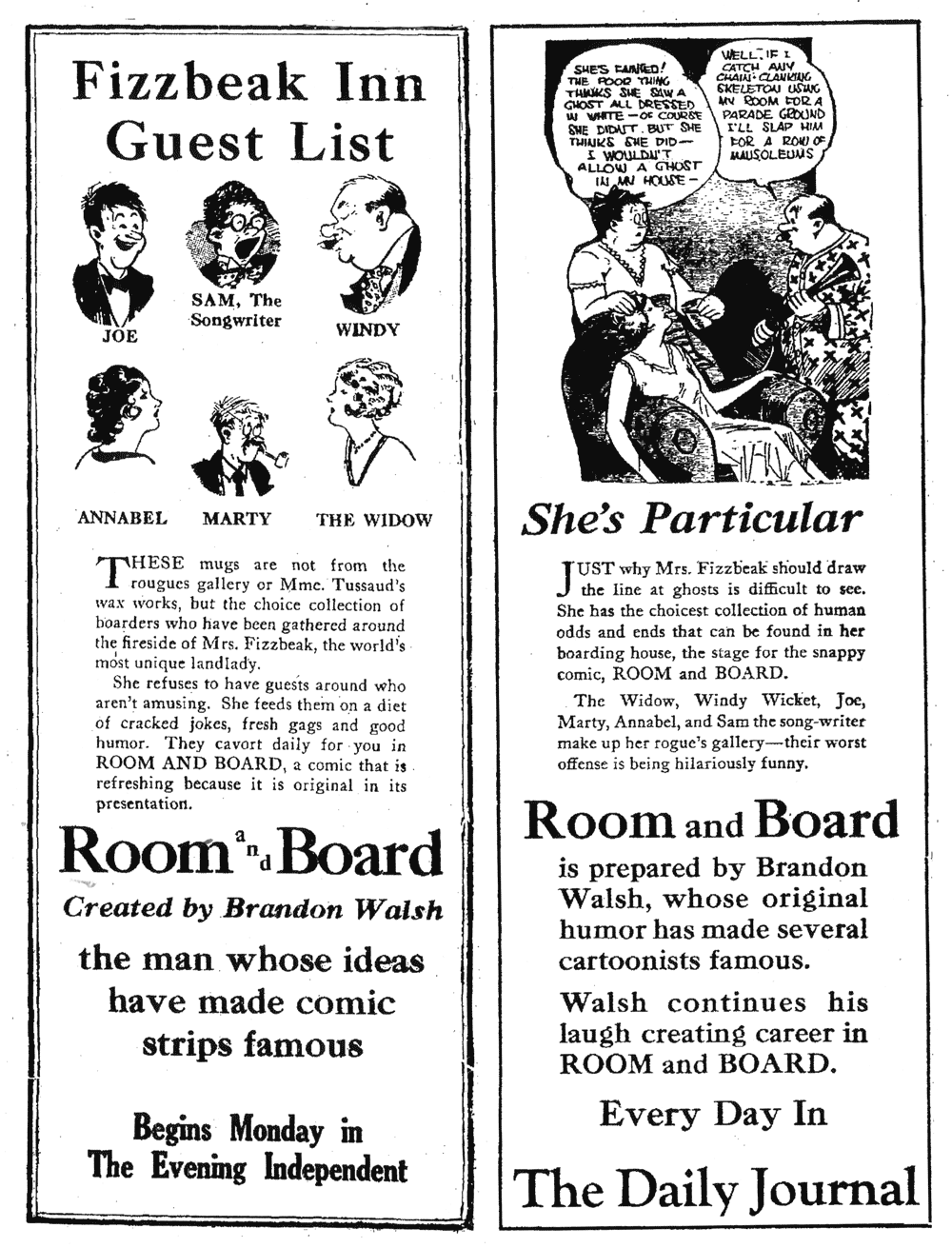 Remember the days of the cold water rooming house? Where the boarders were a crazy bunch of smart-alecky characters who told tall tales about themselves and worse ones about the other inmates? How the stingy landlady would serve the crummiest meals in the smallest sizes? No?

Well, nobody still breathing does, but we know all about it from the people that did, as that little world has been replayed over and over in stories, movies and comic strips. It became a genre by itself, sort of.

There have been many, from Herriman’s “The Family Upstairs” a century ago, to Robergé’s “Mrs. Fitz’s Flats” in the 1950s-70s. But the most famous and long-lasting of strips with this theme was Gene Ahearn’s “Our Boarding House,” one of the stellar NEA titles, which began in 1921.  At first, it was about a crabby landlady and her tenants. It was unnoticed, with Ahearn’s other contributions to NEA, like “The Nutt Brothers,” being far more popular. In January 1922, he decided to add the landlady’s husband, a pompous blowhard who spun Baron Munchausen-like stories about his career that few believed.  He was a character that was truly inspired, and became a favorite. It was for my own grandfather. Of course, he couldn’t know I would someday be working for King Features. 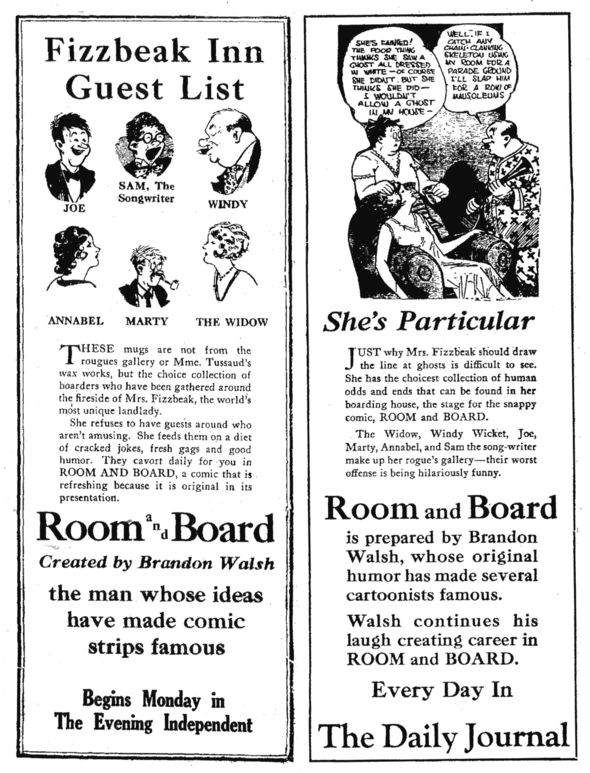 ROOM AND BOARD 1930 Promos. Walsh’s name appears here, but not on the panel.

As with all really popular strips, imitations will follow. On 21 May 1928, KFS put out their own version with the uninspired name, “Room And Board.” It was done by Sals (Salisbury) Bostwick, who once worked as an assistant on Gasoline Alley, and did a minor Chicago Tribune series called One-Round Teddy.  In 1927-28, he was doing a King Features daily strip called “Hello Hattie,” which was pretty much a tabloid-only title. For his new venture, he used  Our Boarding House as a guide not to be deviated from. His Hoople was named Windy Wicket, of about the same basic physical proportions, but an American, whereas it’s implied that the Major was from England, though Wicket makes references to being in the Boer war, which lacked any Yankee participants. 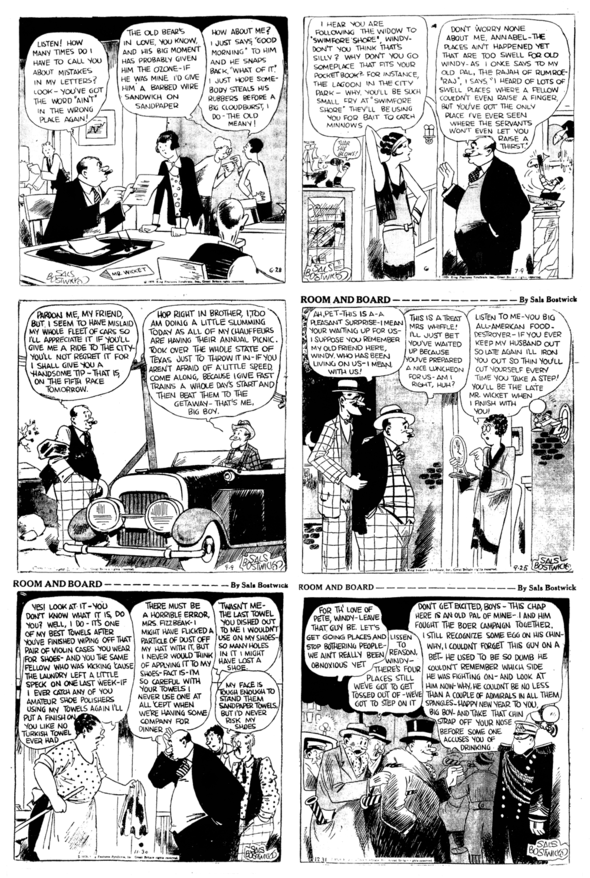 The other protagonists included the landlady, Mrs. Fizzbeak; the young unmarried girl, Annabel; Windy’s card playing/fishing/ heckling cronies, Joe and Marty; and blonde vamp “The Widow,”  his off-and-on love interest.  Windy seems like a W.C. Fields-type of character, though before talkies, you probably couldn’t see him that way unless you were familiar with Fields’s stage performances. Bostwick’s final panel was 22 February 1930. He had died two weeks earlier after a failed appendicitis operation. He was only 27.

He was replaced by Brandon Walsh, from 24 February to 8 June 1930. Walsh was better known for being a strip writer, and ghost for some strips like The Gumps. On 10 June, Ben Batsford took over, signing it “Benbee,” lasting until 27 September when it was given over to Darrel McClure on 29 September. McClure had been drawing minor Hearst strips like Hard Hearted Hickey and Vanilla and the Villains. He had the panel for six months, until 28 February 1931. Interesting to note, Walsh, Batsford and McClure would all work on Little Annie Rooney at one time. 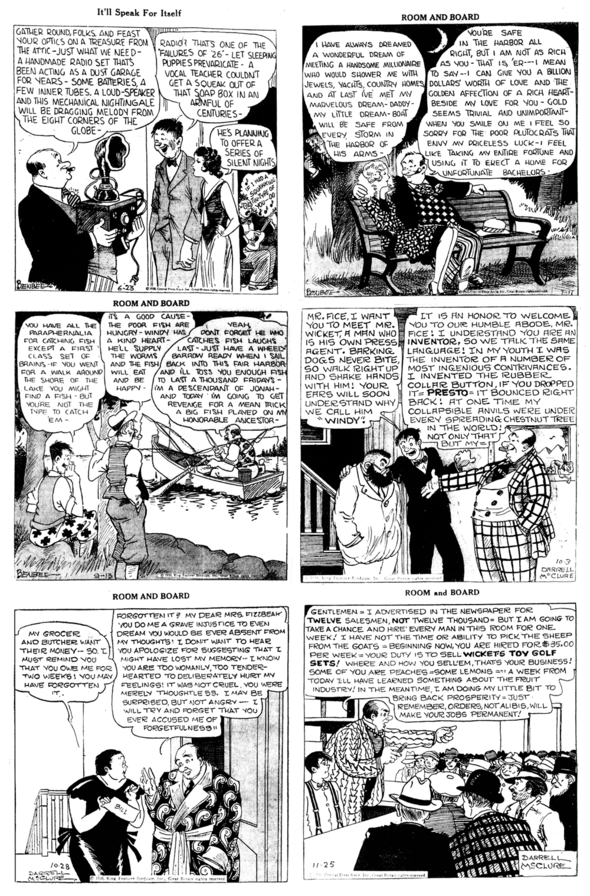 The next one to catch the hot potato was Dow Walling, recently author of “Campus Cowboys,” and onetime assistant for H.T. Webster. (You can see the HTW influence in his art). He, too, bailed out of the feature, working on it from 2 March to 10 October 1931. The final pen pusher to try his luck with Room And Board was Herman Thomas, who’d been doing a KFS strip called Little Tommy Tucker. The plug was finally pulled on 16 July 1932.

It had started out well enough. Bostwick may not have had the writing skill of Ahearn, but he did a good readable stand-in for Our Boarding House. It wasn’t really a big seller in syndication, but perhaps it might have become one eventually. His sudden death put the series off balance. KFS had only a short time to get a new author, and chose Walsh, who was rather flat, as was Batsford. They seemed fit for more serious material. That certainly was true of McClure, who was in his element doing melodrama. These fellows had an unfortunate inability to create a breezy, slangy natural dialogue flow. They also liked to pack the small cube with excess verbiage. If Bostwick had some kind of an ear for snappy repartee, the others have a leaden touch, seeming sometimes to just change normal communication into code.

Walling had a brighter, more gag-oriented approach. He also added new, younger college-boy characters, much like Campus Cowboys. Walling was a nationally known college athlete in the 1920s, so he adapted the series to something he could relate to. The last man on the job, Thomas, also favored gags and action, and I think he might have steered it into a better position, but clients just weren’t looking at it.

Room And Board was obviously something we had low hopes for and just never put anyone important enough on it. The switching of artists broke up any consistency that would be needed to attract a following.   All these guys were second-tier artists, doing secondary strips that might be found mainly in the tabloids, some being in our Premier Syndicate, which offered lots of odd strips that usually were found there. It could be none of them really wanted to do it any longer than the syndicate made them. Any item that goes through five artists in two years must have been regarded as jinxed. Or Doomed.

That on Monday, 10 November 1930 we changed Room And Board from a King Features Syndicate strip to a Central Press Association is telling. The Central lineup was our budget syndicate, if you will. It was operated like NEA was, one price and you (the client newspaper) had access to every strip, column or photo offered under the Central banner. Even with this arrangement, few papers that took the Central package bothered with Room and Board. So in 1932 we just said “done” to a bad job. Maybe it could have been handled better, after all, some of these same guys went on to long, successful careers.

But we did do something smart, we kept the copyrighted title, and would reuse it four years later, this time to far better effect. More on that next week.

Glad you like Queenie. It was in a fair number of papers, throughout the country. Interlandi was one of the hottest cartonists in the 1960s, one of  few magazine panel men that made it in syndication, too.

Maybe we can put Queenie in the vintage section sometime.

THE CENTRAL PRESS ARCHIVIST.
(aka The KFS Archivist)