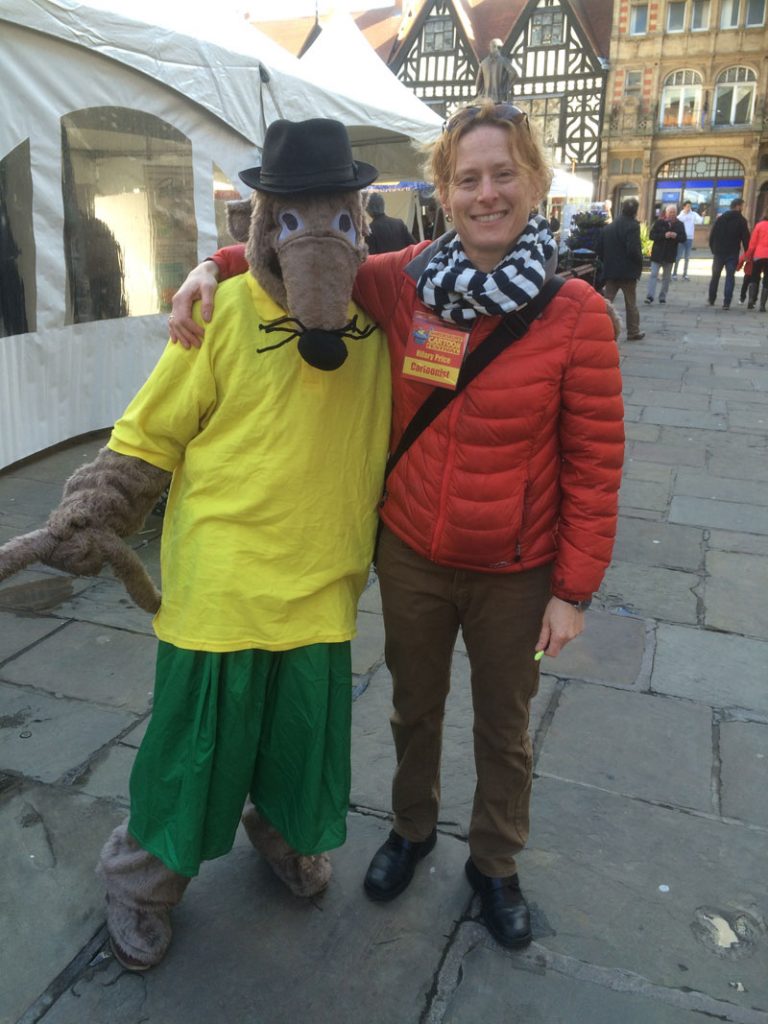 As I write this I am drinking tea, eating biscotti and watching an NHL playoff game.  (It’s between periods.) It seems like the wrong food for ice hockey, but since it is playoff season, all the players have grown huge bushy beards, as is the custom.  The result is that everyone looks Amish, so what better way to cheer them on than with a wholesome hot beverage.  The Pittsburgh, Pennsylvania (Dutch) Penguins are up one.

In early May I flew to England to be part of the 13th Annual International Cartoon Festival in  Shrewsbury, a historic town in the southwest part of the country, near Wales. 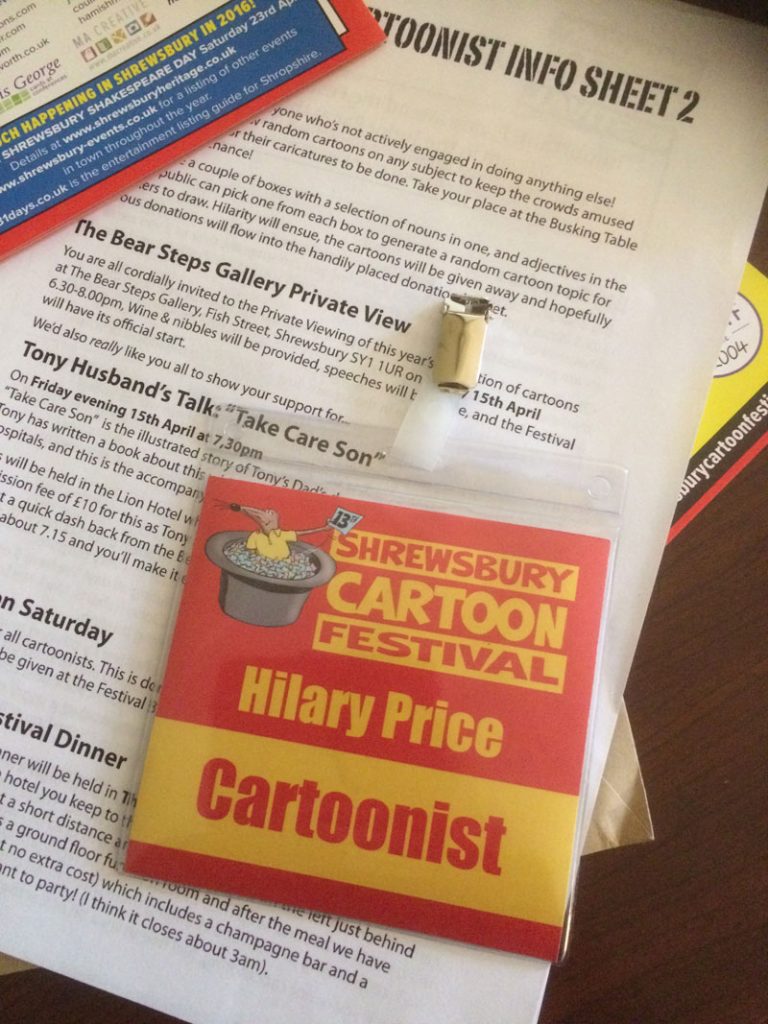 There was a big  tent in the square, and a dozen of us drew cartoons on 6 foot by 8 foot boards covered in white black-out curtain cloth.  I’m used to drawing at 1/72nd of that size, at 4 x 13 inches!  There was a big truck with tons of markers, brushes and paint that we could go grab. 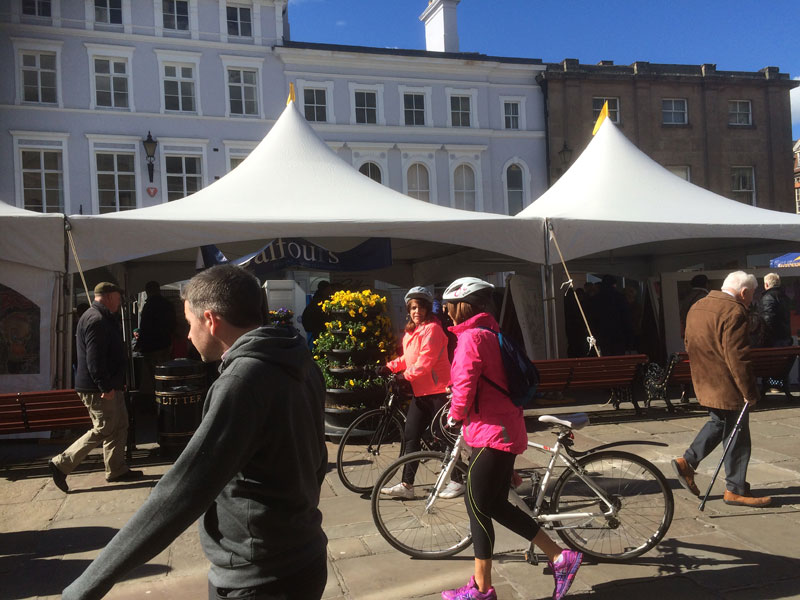 While we penciled and inked out the boards, onlookers milled about, watched us draw, and asked questioned. It was the Festival’s 13th year, so the theme, naturally, was luck.

Here’s a sampling of some other artists: 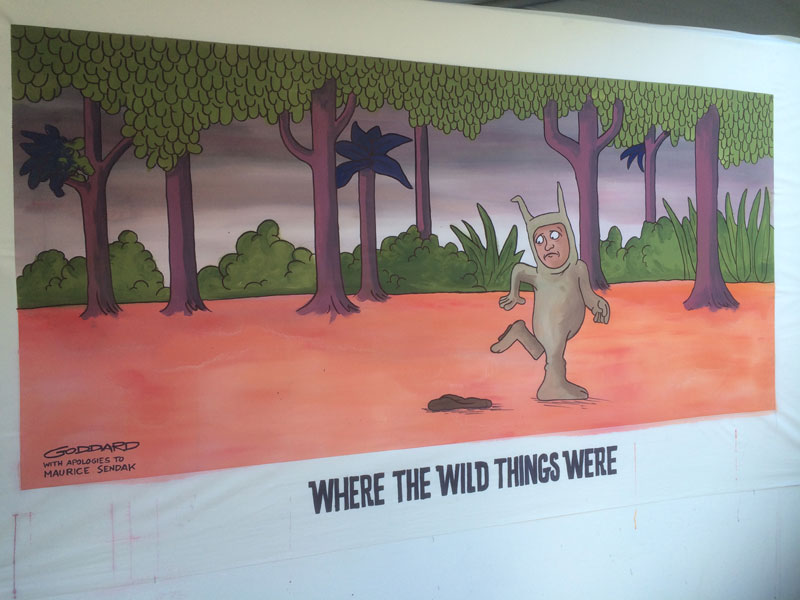 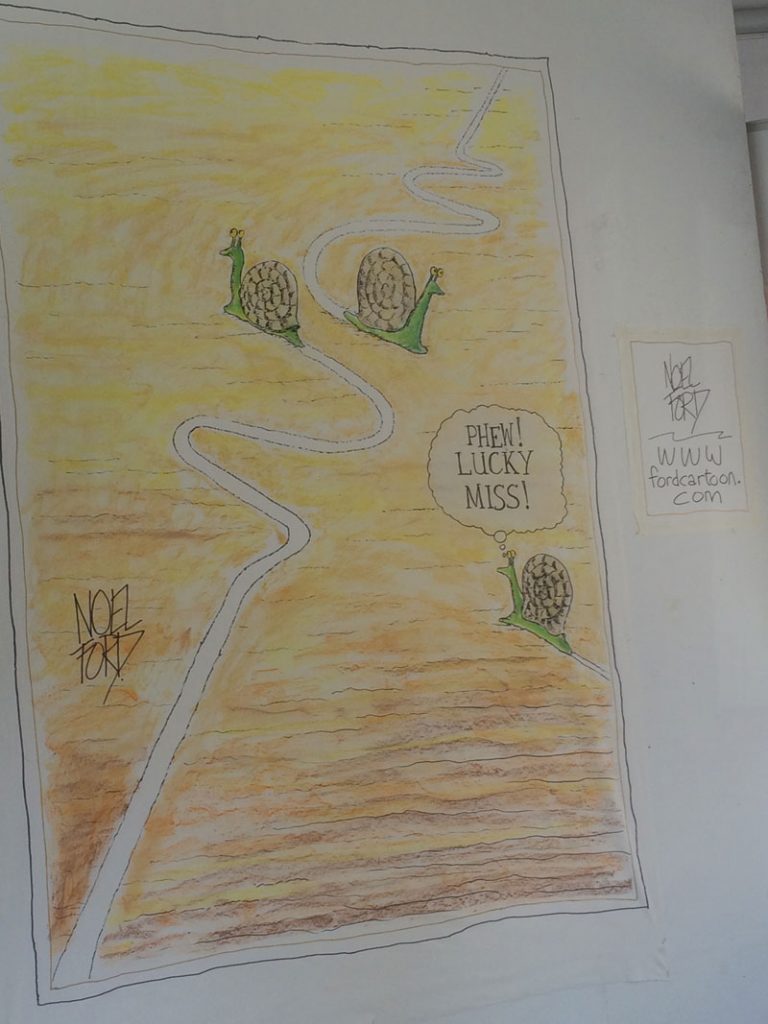 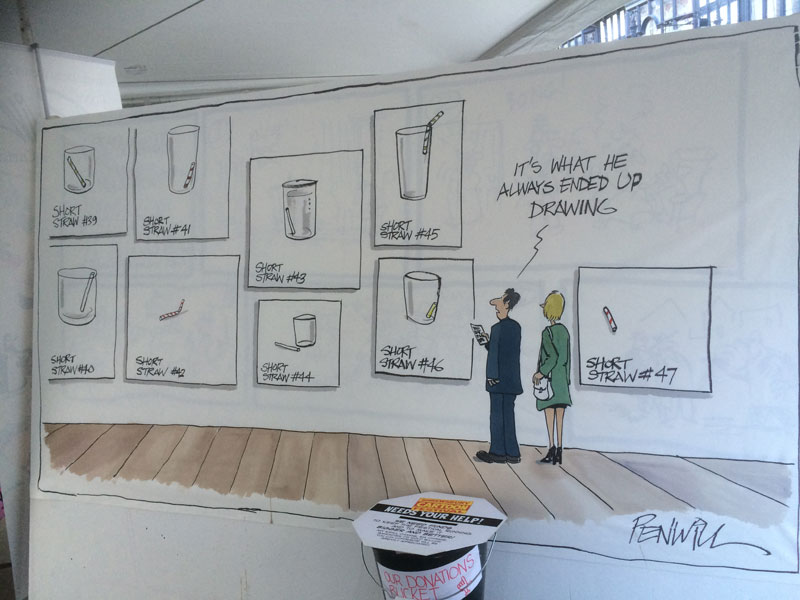 Below–The Surreal McCoy reluctantly posing by her cartoon.  She’s the one who invited me here.

We had from 10 am to 5 pm, and you’d think that would be plenty of time, but the real fun was stopping and getting into conversations with folks. I finished at four.  It was also hilarious to hear parents describe my cartoon in paragraph form to their little kids to help them get the joke. 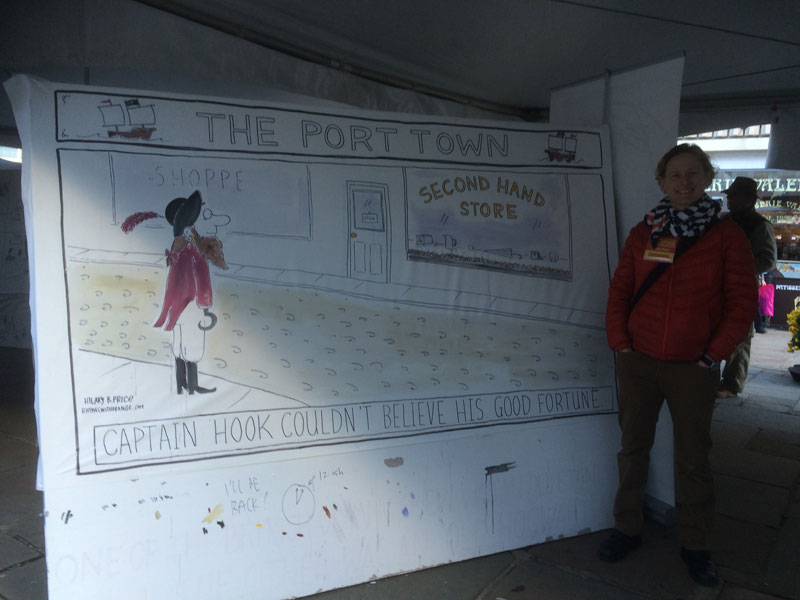 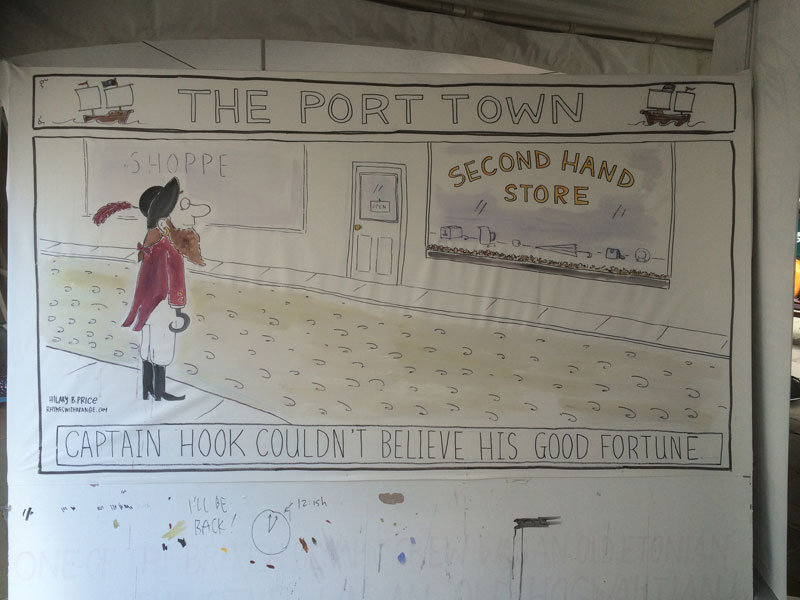 There were caricaturists doing free portraits, and other cartoonists drawing whatever came into their heads to entertain the people waiting in line for their caricature.  (How very thoughtful and British!)

The night before the big event, UK cartoonist Tony Husband shared slides and stories from his new book “Take Care, Son,” about his dad’s dementia.  It was both heartfelt and heart-breaking. 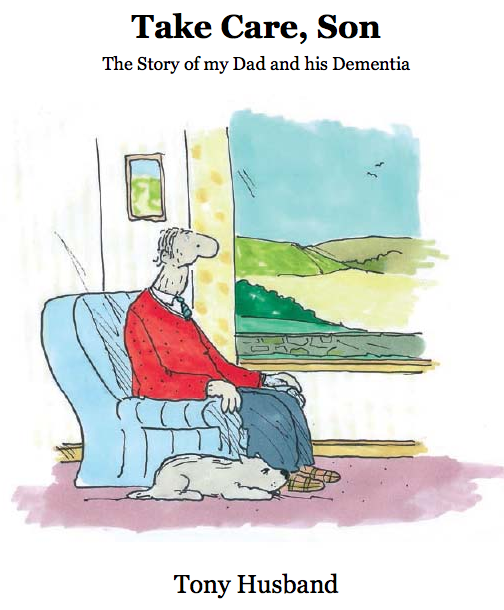 Here’s a close-up of some of Tony’s lighter stuff from his big board.  This one kills me: 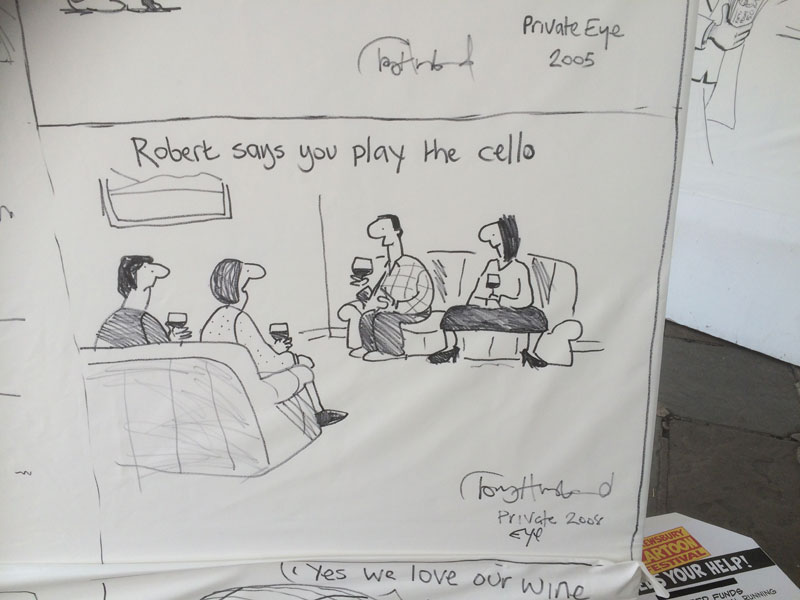 The night after the main event we had a group dinner.  No tablecloth is ever safe when there are cartoonists around:

Here’s another one of Tony’s: 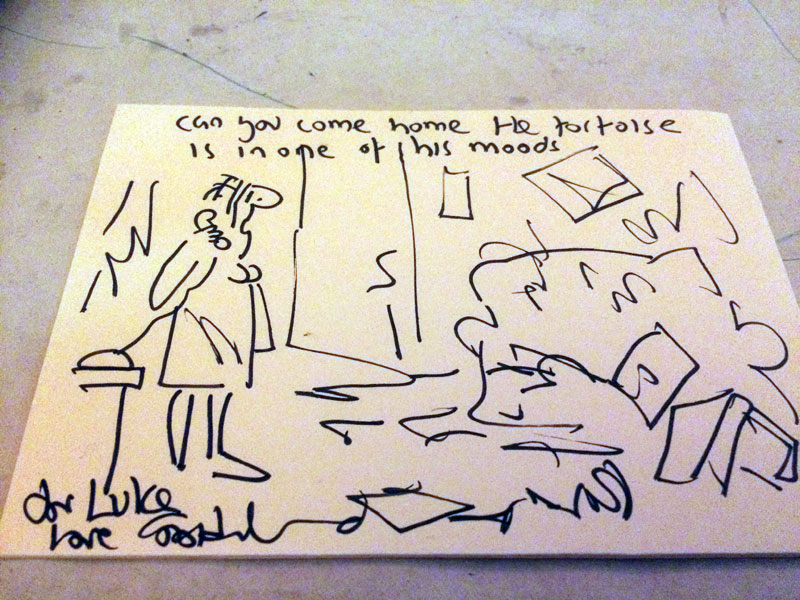 And one from Rich Skipworth, the man who spearheaded the weekend. 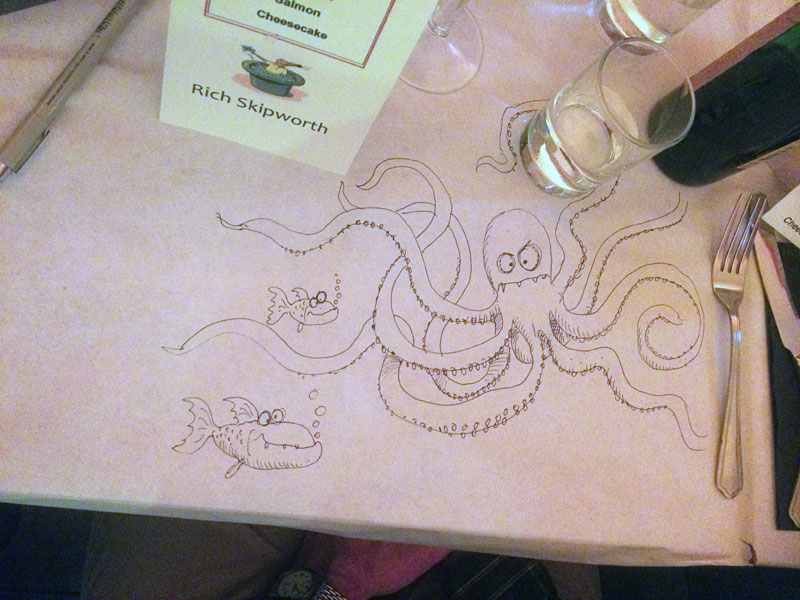 Oh, and here’s my place card from that final dinner.  You are what you eat. 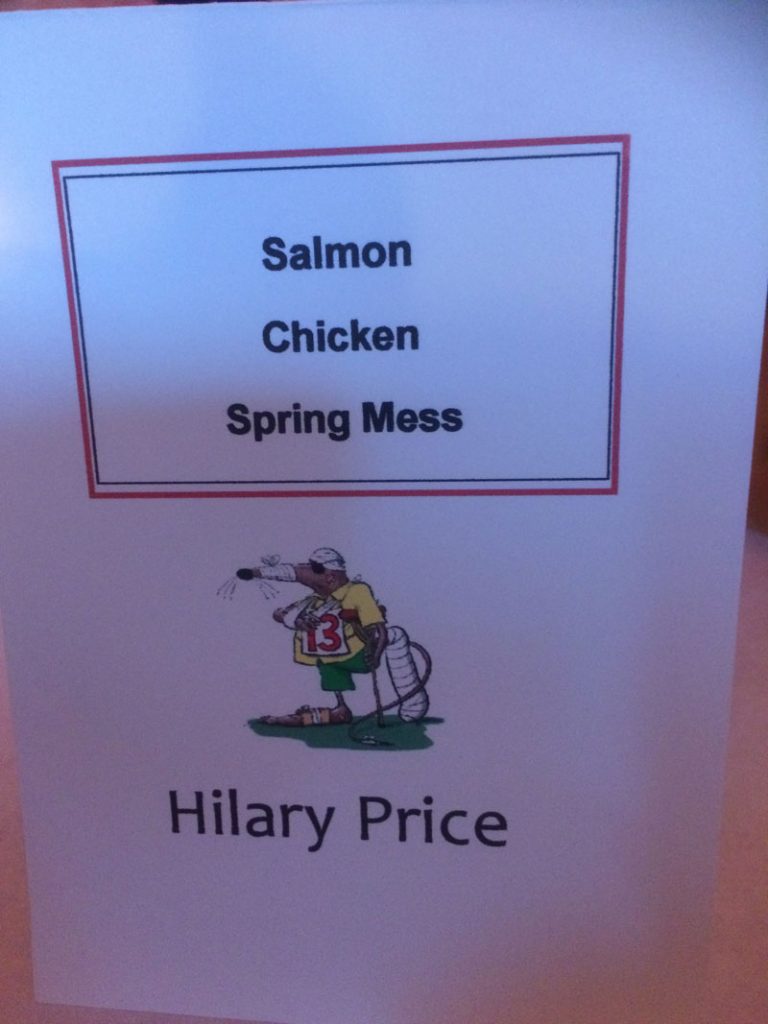 Going to Graceland– for the 70th Annual Reuben Awards Weekend in Memphis!

This year’s National Cartoonists Society Awards weekend is in Tennessee, and I’ve been enthusiastically growing out my sideburns in anticipation of visiting Elvis’ Graceland.  However, that effort has been going about as well as Tennessee politics have been going, which is to say, not very well.

Recently Tennessee Governor Bill Haslam just signed into law house bill 1840, which gives counselors and therapists license to refuse mental health services to LGBT people.  This kind of thing sends me right into therapy, which I might not actually get if I lived in Tennessee.

We are not pulling out, but I am pleased that the board of the NCS (which I am on) will be releasing a statement on Friday standing in alliance with the LGBT community.  Watch the Rhymes With Orange Facebook Page for it.

On the bright side, we will be doing an awesome fundraiser for St. Jude Hospital. which is a research hospital for children with cancer that provides its services for free.  (And, which, as a federally funded entity, does NOT discriminate. And which, ironically, I did the therapy cartoon to auction off at the event BEFORE Gov. Haslam signed the law.)  There will be caricatures and drawing and hobnobbing– Tickets are available, so come for the fun and the good cause! 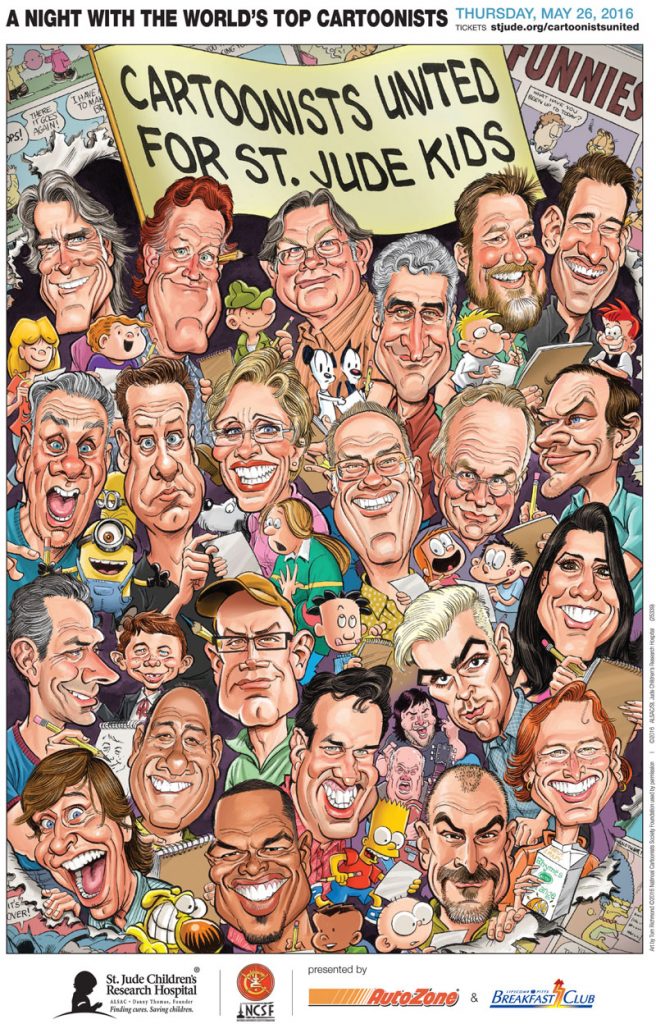 By the way, I’m up for the fancy Reuben award, which is always an honor.  The other nominees are Lynda Barry, Stephan Pastis, Mark Tatulli and Mike Ramirez. It’s an honor to be standing alongside them, but the real fun will be sitting alongside them at the bar and ruining perfectly good cocktail napkins. 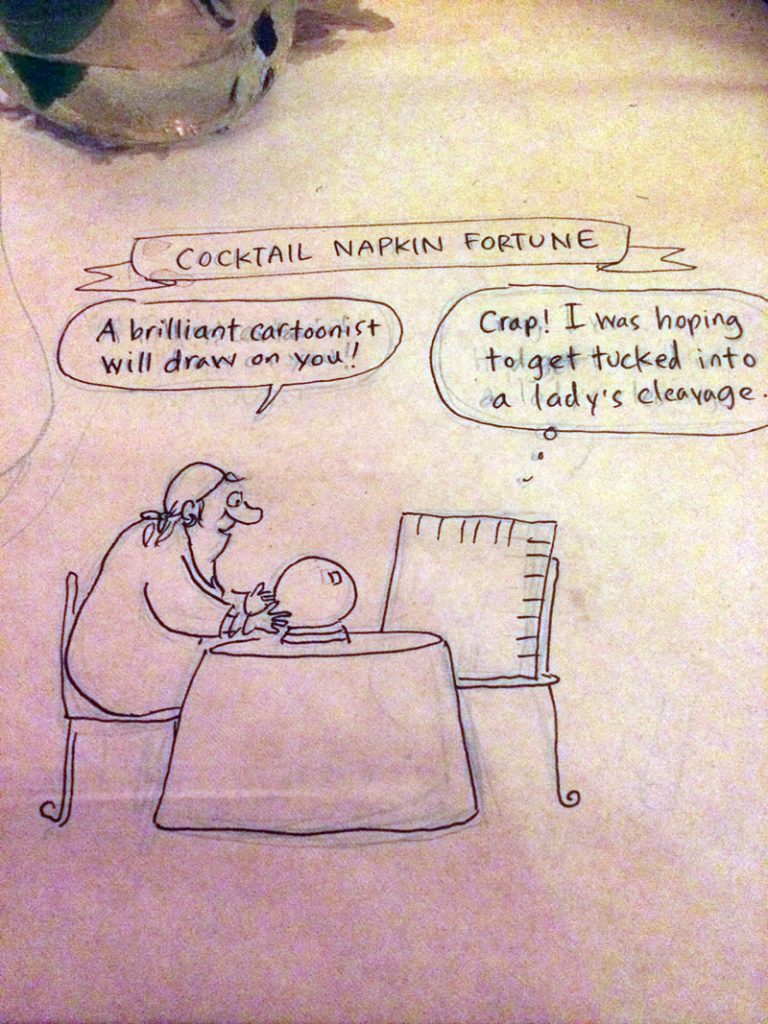 Supporting the Youth of America

The Center For Cartoon Studies in White River Junction, VT celebrated its 10th anniversary with an afternoon block party.  We cartooned for the public until the kids wanted to take over.  Boy are they demanding. 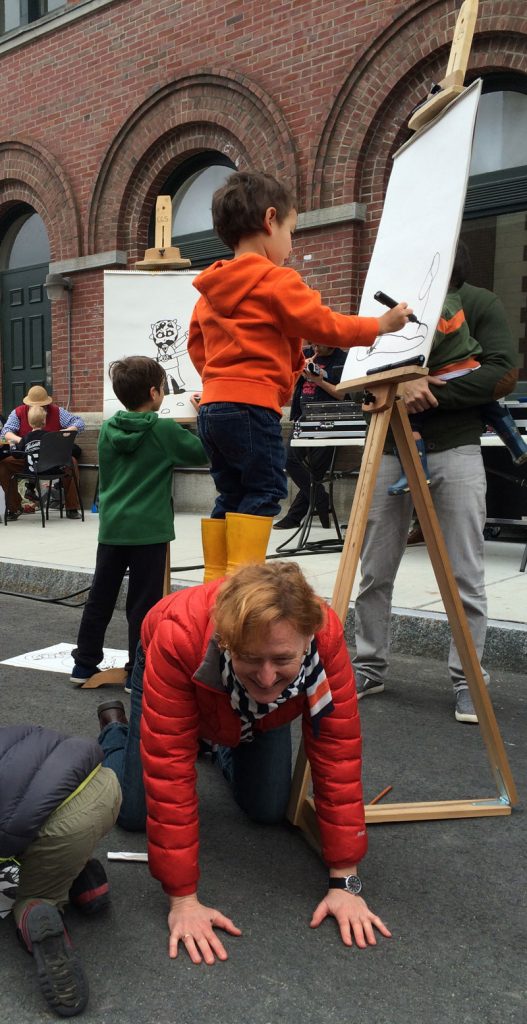 At the same time, CCS released a comic from the project students did with the VA hospital in White River to tell veterans stories.  You can download a free copy here: 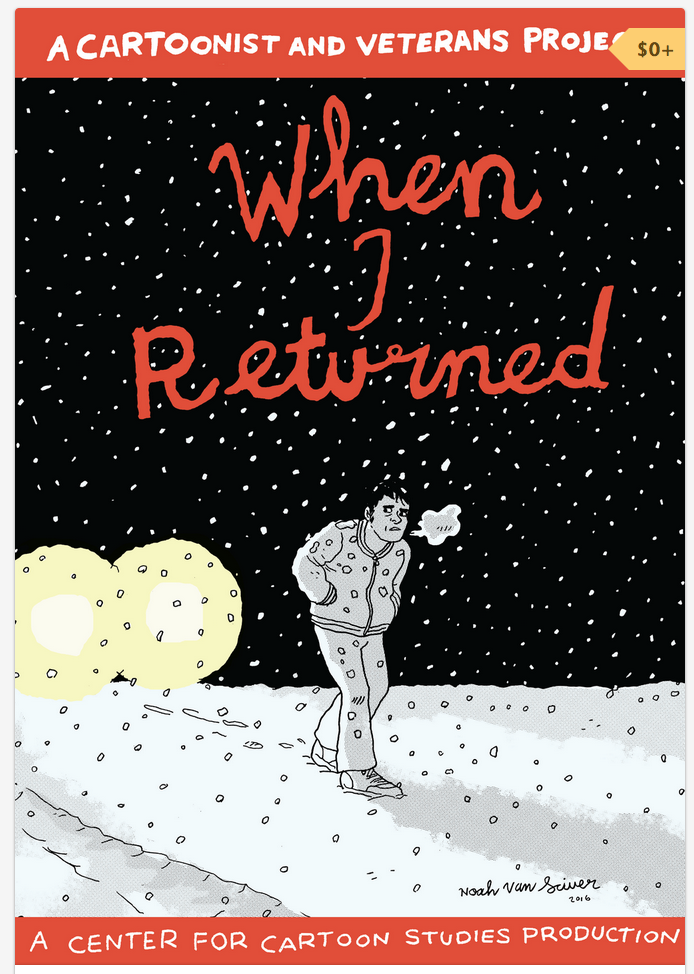 Each May, the National Cartoonist Society Foundation gives out a scholarship each year to a promising cartoonist in college.  Tex Minos is this year’s winner: 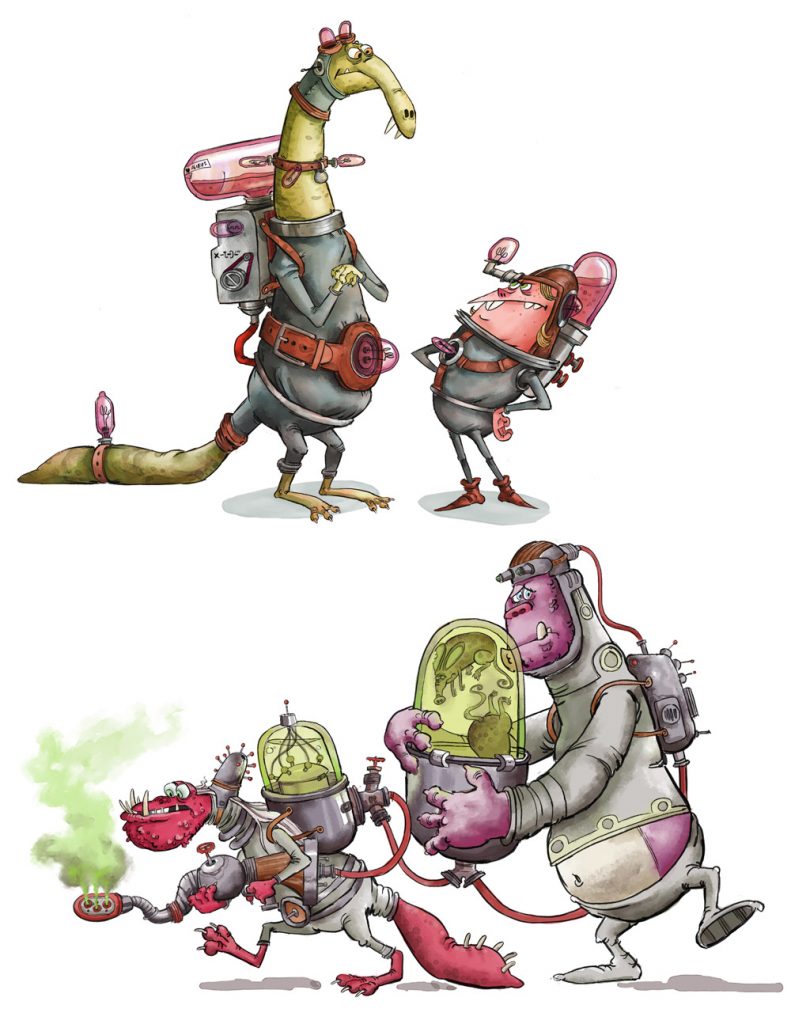 This is the second short radio play I’ve written with my hilarious actor pal Kelsey Flynn, and it’s being performed with five others as a fundraiser for New Century Theater on Saturday June 4th in Northampton, MA.  Check out the Facebook page for the event. 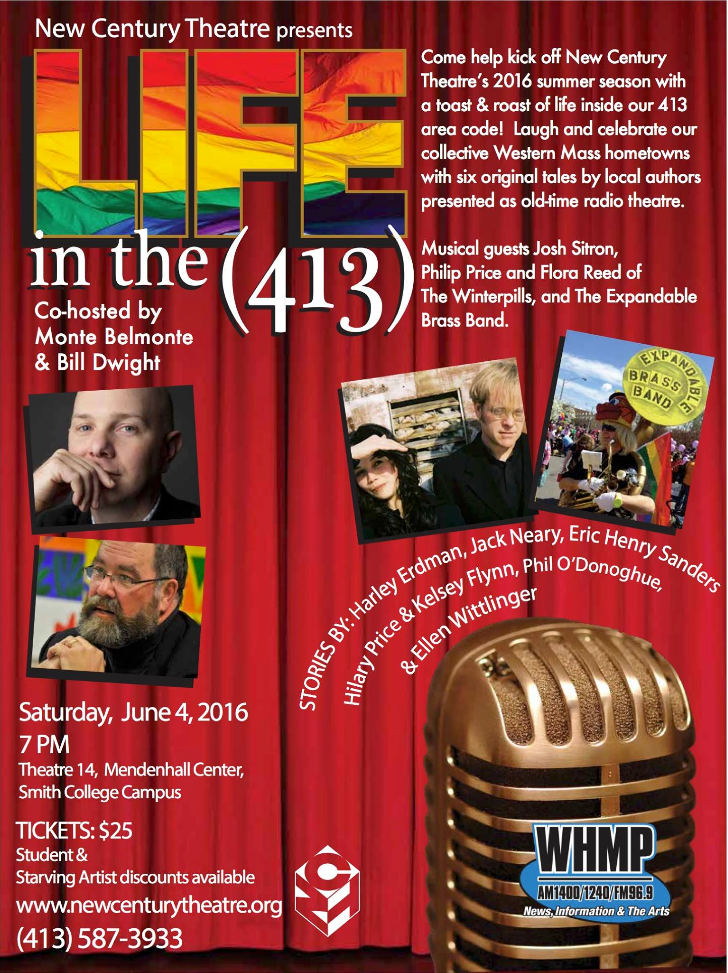 I had nine students for my online class, and basically tried to teach them everything I know about cartooning in five days.  They were great sports, and probably still recovering.  I’ve been invited to teach the class again next March.  Mark your calendars!

A Haiku For Tom My Cat

Don’t walk away from

I bought you a case. 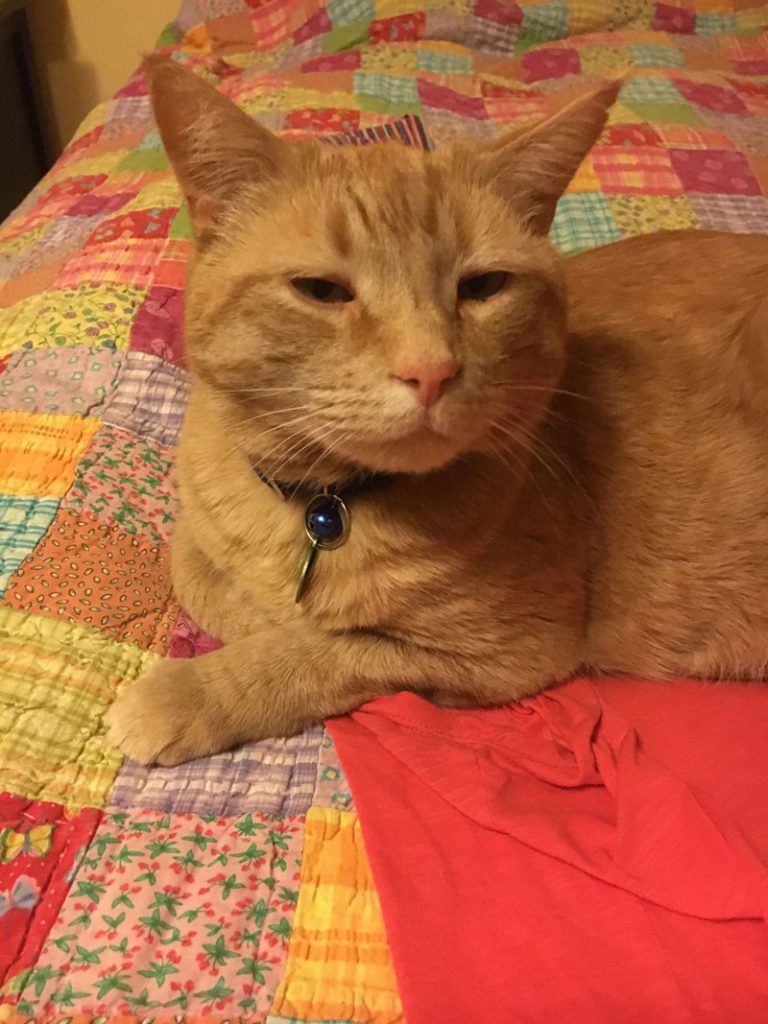 Thanks for tuning in.