So this week, our cartoonists are sharing with you their tales of bad luck and superstition as only the funniest people in the world can!

Bad luck, good luck, no luck—-they’re all the same in Zippy’s home town of Dingburg, whose motto is “Going too far is half the pleasure of not getting anywhere”.

Many years ago when our oldest daughter Meredith was about 3 years old, I had a night of bad luck when it came to cartooning. Our Assistant Minister came over to have dinner with my wife, our daughter and me at our house. After dinner we went into the living room and talked for a long time. After a while we noticed our daughter had walked off to play in another room–or that’s what we thought! Actually, when I got up to look for her, she had walked into my home studio and colored all over a batch of original comic strips I worked on to submit to syndicates! Our minister came in and laughed, and laughed at this little girl drawing all over my art at my drawing table. Then he told me I should give him a ride home so it would give me a chance to cool off! Ha, ha!

I have had terrible luck with timing – doing a celebrity gag and having that celeb die within days of it running. Princess Di, Marlon Brando, Julia Child – so much so that David Copperfield called me personally and asked that I never do a gag about him. Of course I did and he survived. or did he . . .

Also had bad timing about doing a gag about the President and First Lady (with first lady being a primitive sort i.e.: Lucy – first lady get it?) Anyway, I drew the President as white and slightly overweight but this ran a week after an Orange County exec was accused of sending Obama card emails depicting them as monkeys. Ugh. The only time the right wing has stood up for me . . . they got the joke. The left was furious even after getting the joke and I was set up to be an example. Lost a lot of papers.

Remember Xena, Warrior Princess ? I loved that show. And Topps Comics published a Xena comic book. I was thrilled when I was asked to draw the wedding of Zena and Hercules issue. I was really looking forward to drawing the characters riding flying horses. I’m one of those horse crazy girls, and I’ve ridden for most of my adult life. So you can imagine how disappointed I was when I had to turn down the job because I broke my wrist. In a horse riding accident. Luckily, I was able to draw just enough with my left hand to continue drawing Brenda Starr. But I never worked for Topps Comics again.

I, like most cartoonists I imagine, could easily tell numerous stories of projects you were hoping to do, but various comics publishers just weren’t interested… Or even self published projects that you actually lost money on.

Instead, I’ll talk about the bad luck that the title character, Mark Trail, has. Mark is routinely away from home in search of material to do stories on for a Woods and Wildlife magazine… And these trips invariably lead him to life threatening danger. I’ve often wondered why Mark doesn’t ask himself “should I change jobs?”.

As of late, I have also established the theme that Mark has BAD LUCK with boats, having directly and indirectly lead to the destruction of several boats. I intend to keep this “bad luck with boats joke” going as Mark Trail readers have figured it out and are almost chomping at the bit with each new adventure to see if Mark gets near a boat!

The previous time the topic of luck came up, I responded with depictions of bad luck at Fastrack. Here are some other examples from that week of strips. 🙂

My worst luck had to come with my attempts to start a Cartoon Museum. In 1974 a neighbor in Greenwich, CT said, “I wish someone would start a museum in our old vacant family mansion.” I seized that opportunity to start the first cartoon museum in the world. It was so successful with visitors from all over the world flooding the halls that the owner said we were wearing out his house and wouldn’t renew our lease. So this wouldn’t happen again, we found a beautiful castle and bought it .The Museum was always packed and we thrived until one day the turret began falling apart and large stones kept crashing to the ground, nearly killing people. They said it would cost over a million dollars to fix it so we closed the Museum again. They heard about this in Boca Raton, FL and invited us to locate in the new outdoor mall they were building. I designed a beautiful new building (I have a degree in architecture) to open up there, but we eventually had to close the Museum and ship the collection back to CT.

The owner of the Empire State Building stepped in and offered us space on the first floor. We hired a staff and designer to prepare to move in when the owner wrote us cancelling our contract The Force was against us. We gave up and turned over our enormous collection of cartoons to Ohio State University who fixed up a nice campus building where the Museum now happily resides. But I still get a tear in my eye when I think of the time and effort and money I put into my dream of creating a cartoon musum and it was rudely seized from me.

I’d say this Hank Ketcham panel MORE than qualifies for this week’s topic. 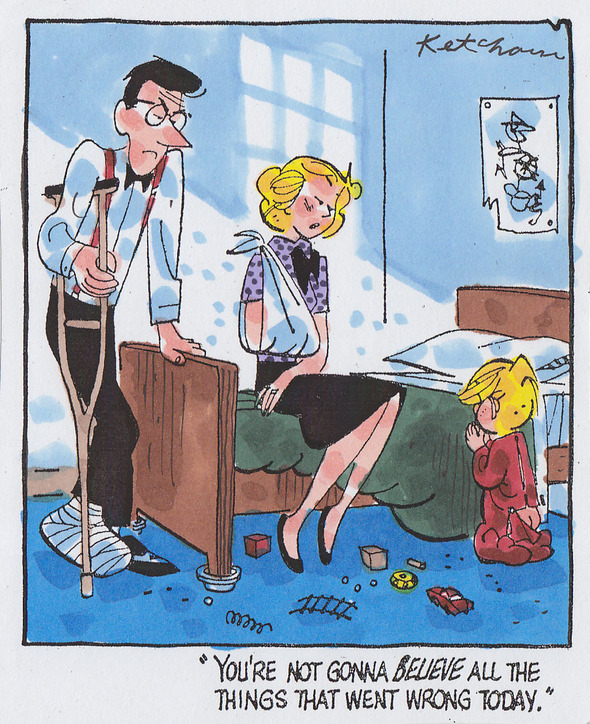 This strip goes back to 2013. It’s one of my favorites with Harley. I can’t think of any bad luck I’ve had with the strip. Knock on wood!