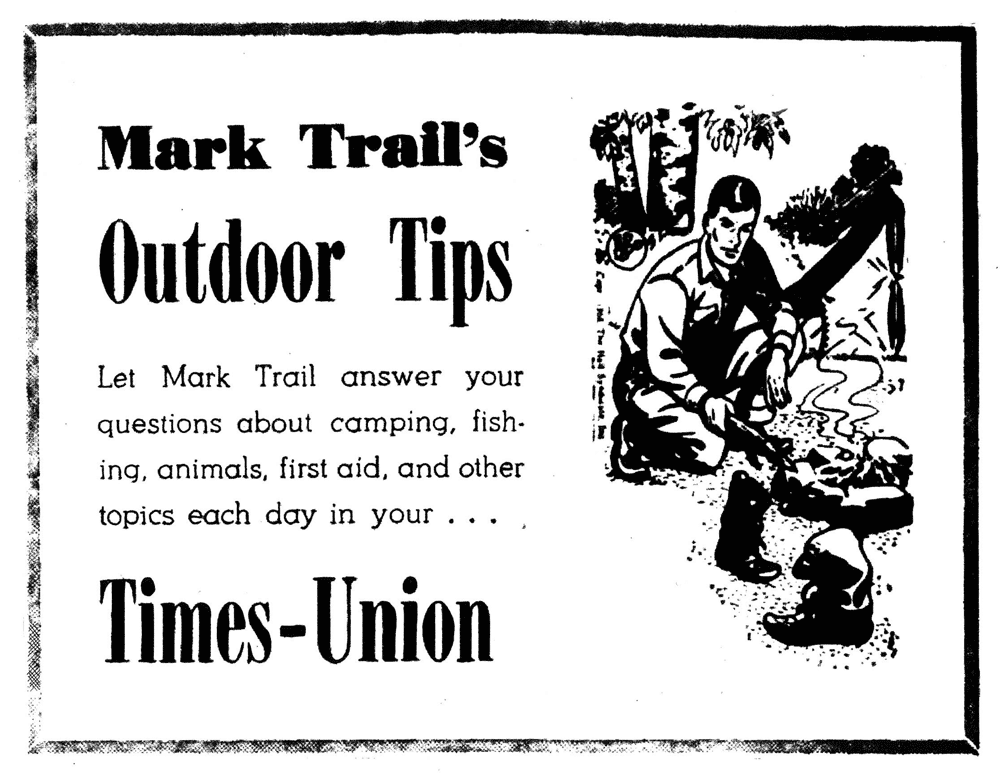 In honor of the seventieth anniversary of Mark Trail this month, today we’ll see some samples from the companion series, the one-column daily MARK TRAIL’S OUTDOOR TIPS.

Ed Dodd was a woodsman’s woodsman. He was a consummate hunter, fisherman, survivalist and environmentalist. He was also a good cartoonist, and used his talents to not only convey the adventures of his woodland hero, but to educate those interested in the ways of the wilderness, taking from his vast expertise on the subject with this title.

It began in 1956, and often appeared on the sports pages of client papers. I guess having a cartoon character as the purported author makes it seem a little less serious, but it was very much in earnest, and most of the ideas shown could have come right out of a Boy Scout manual.

The images showed outdoor life scenes of hunting, fishing, tying hitch knots, tent and  boat maintenance, but also acts of treating equipment, as well as charts and diagrams of handling tools and techniques for subsisting far from civilization. Often the highly detailed close-ups get surreal, and a lot of his brainstorms about recycling odds and ends for woodland use seem a bit far-fetched, but then again, the only trees your old Archivist ever sees have been converted to newsprint.

The feature began as a Hall Syndicate item, and ended up as a News America Syndicate when it stopped in 1987. The last few years appear to be reruns anyway. 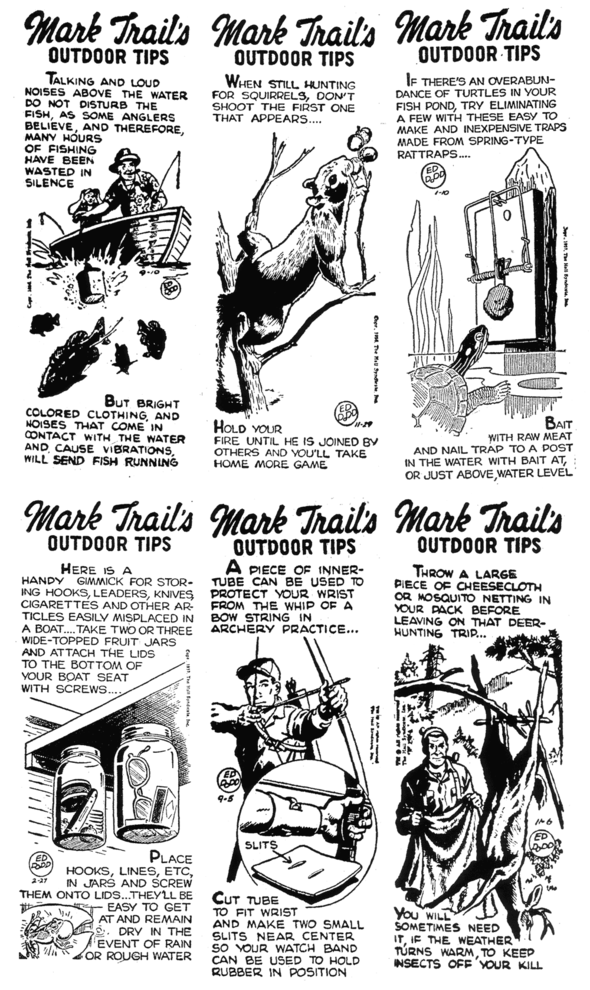 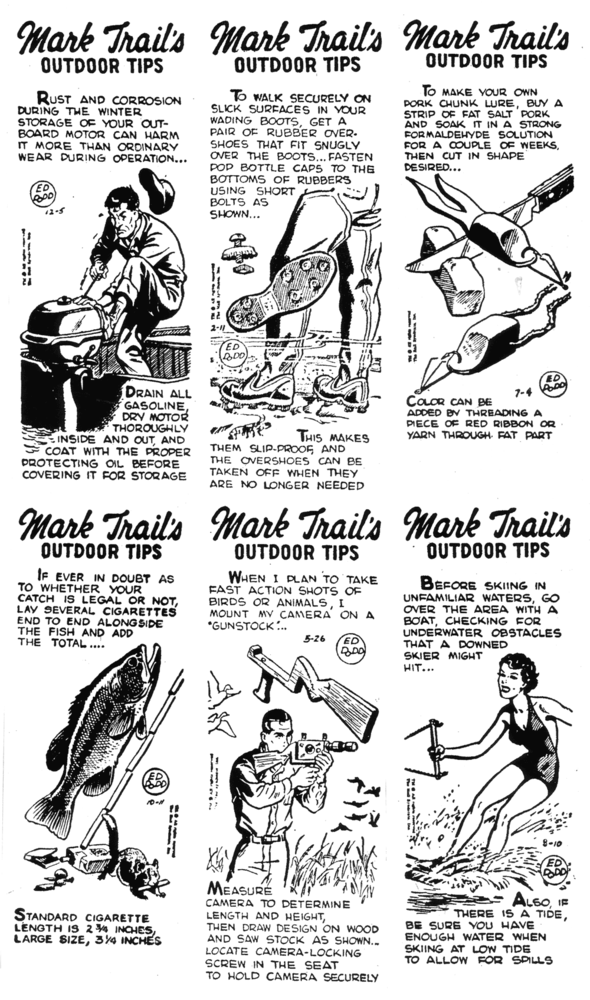 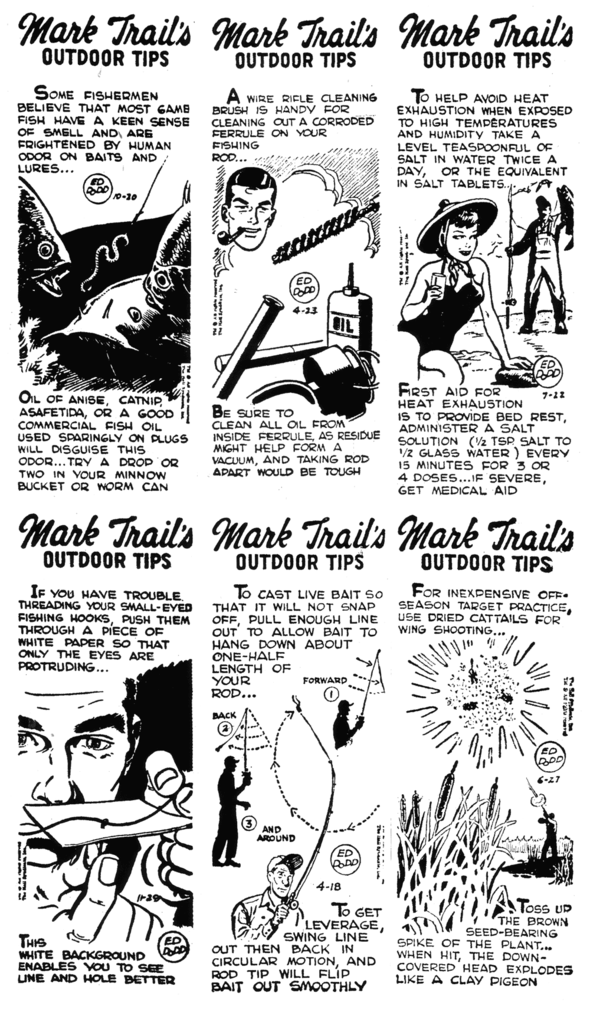 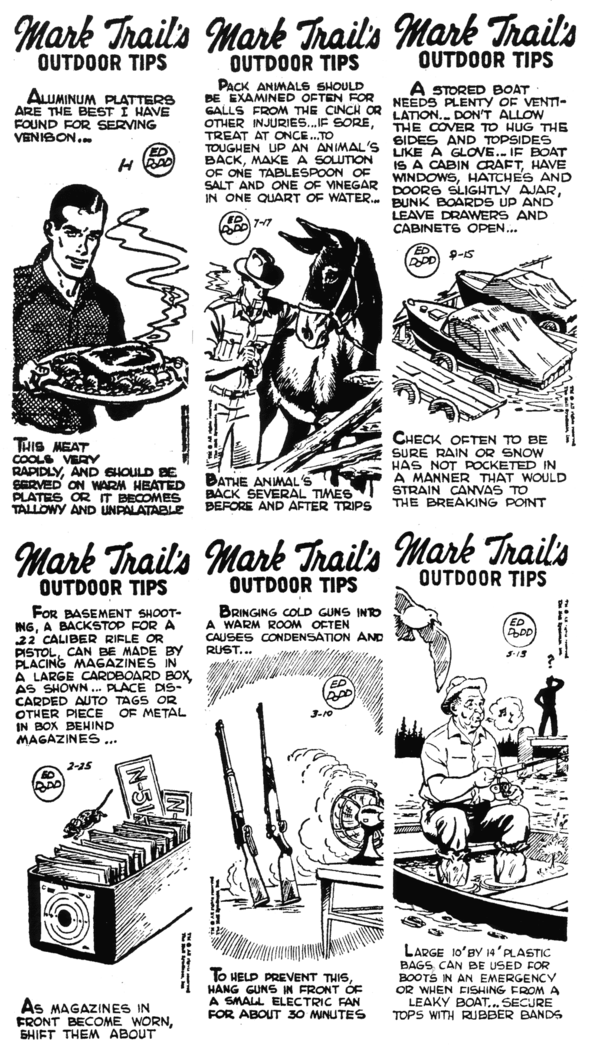 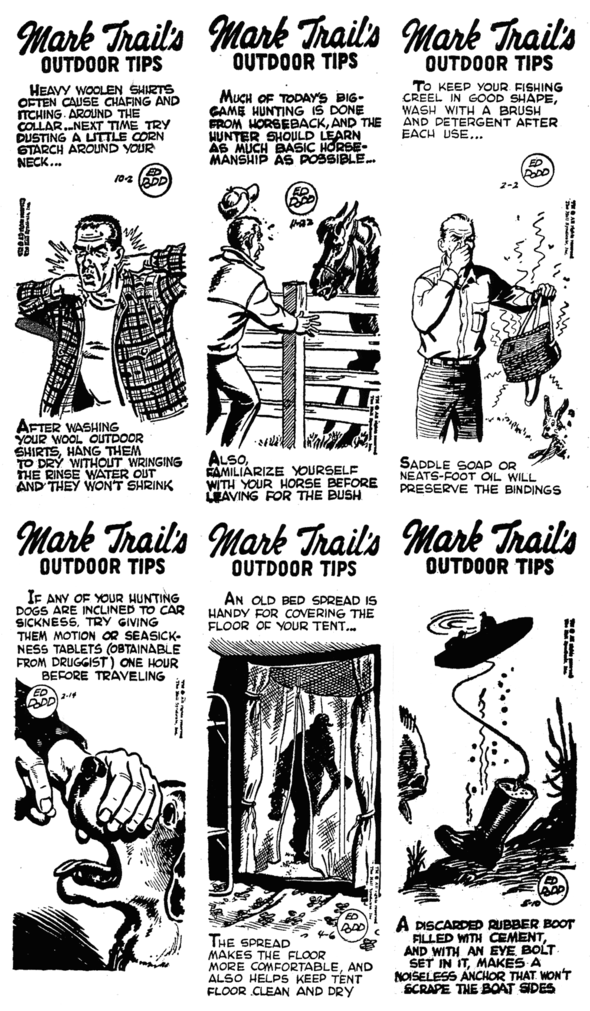 I believe there’s more interest in the vintage continuity strips because there are so few of them. Today, there are only one or two left. Even the soap-opera titles are dwindling. This is a trend of many years; there aren’t that many newspaper readers that take comics that seriously.

We just don’t have that many more continuities left , most of our unused titles that are left are humor strips.

We didn’t save a file of Red Barry or the Alex Raymond era of Tim Tyler, so it’s good to see there are reprint collections coming out.

We can’t add Tumbleweeds. I have a large file of them (1965-2007) from the Lew Little, King Features, Register and Tribune, even United Features eras- but we don’t have the rights to them. The irony is depressing.  Tom Ryan had a truly great strip. One of the few that could get a real laugh out of me. Wishing him well- he’ll hit the big 9-0 this year.

Have no fear, We’ll run the Jungle Jims in sequence, starting with the Raymond years, all the way into the Paul Norris material in the 1950s. The series’ whole existence was only twenty years.

This is about a month late, but relating to the Post Card with three postmarks – it was sent from Columbus, Ohio on 13 February 1906 to a recipient in Cambridgeport, Mass. Notice the small “R” in the lower left hand of the “waves” of the main cancellation- it means it was cancelled en route to Boston on a railroad post office car.

The second imprint, the single identification ball, stamped upside down here, shows it was received in Boston on the morning of the 14th. As the card was not immediately to go to a Boston address, it was apparently sent to the post office in Cambridge, which must have done the sorting for the towns south of it, and somehow was run through the machine there like it was a new cover, just mailed.