“THE PHANTOM 80th ANNIVERSARY” COMPETITION WINNER ANNOUNCED DOWN UNDER 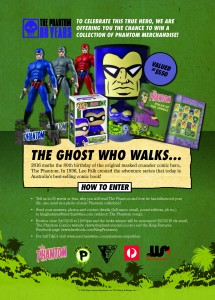 Everyone knows the fans in Australia are SUPER FANS when it comes to The Phantom. To celebrate the masked hero’s 80th Anniversary this year, King Features Australian agent, Merchantwise, staged a competition. Entrants had to purchase The Phantom 2016 Annual from Frew Publishing, and refer to the back inside cover ad to find out how to enter.

The big Prize Package, with a total retail value of $550, included:

Entrants had to answer this question in 50 words or less: “Why do you still read the Phantom and how has the Phantom influenced your life?” They also had to send in a photo of their personal Phantom collection.

The single Major Prize winner has been chosen! Congratulations to  NOAH WARNEKEN!!! 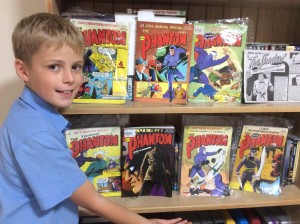 And it’s no wonder. Check out his answer: