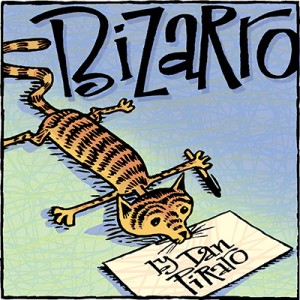 (An embiggenation of this cartoon can be achieved by clicking it.) 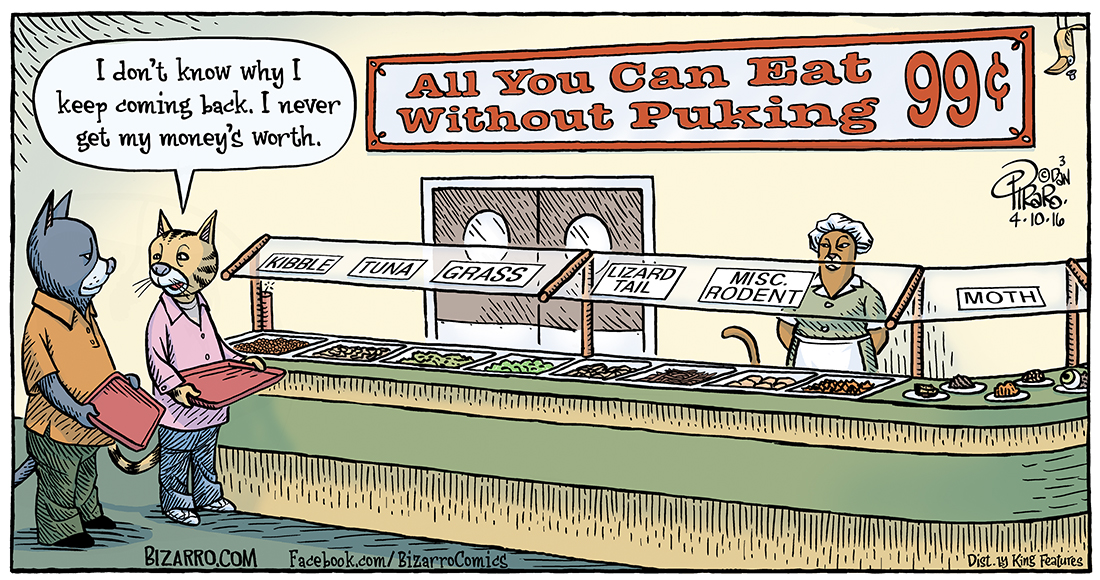 Bizarro is brought to you today by The Bagel People.

People often compare dogs and cats: which is smarter, which is the better pet, etc. In my opinion, dogs and cats are such dramatically different species that they really can’t be compared. Dogs are pack animals and want to please their leader, cats are solitary hunters and don’t recognize others as part of their group. Huge difference. Like trying to compare gorillas and squirrels––they both have fur, but beyond that, not much to compare.

One way in which I do think a comparison between dogs and cats is informative, however, is in their usefulness as roommates. I’m not referring to the fact that one will deter burglars and one will not. That’s too obvious. I’m referring to housekeeping. When you live with a dog, you can toss any food item onto the floor and the dog will immediately remove it with the efficiency of a steam cleaner. This alleviates the bothersome task of having to walk to the garbage disposer, turn on the water, and flip a switch. Big time saver. Similarly, plates do not need to be washed as you can put those on the floor when you’re finished eating, too. In a matter of seconds, the plate will shine brighter than any dishwashing soap can manage. If you have a trained monkey that can put the plate back into the cabinet when the dog is done, you’re off the hook completely.

Cats, on the other hand, will sometimes eat what you throw on the floor, but then just walk into another room and vomit it back up. Probably onto something that requires dry cleaning. It’s more of a moving service than a cleaning service. In this way, I prefer dogs.

My beloved Olive Oyl and I have one cat and one dog, so we get all the benefits of both. And when the cat pukes, the dog cleans it right up. Disgusting, yes, but not as disgusting as having to clean it up ourselves.

I’ve yet to solve the mystery of how either animal can remain among the living, however, as our dog shits more than she eats and our cat throws up more than she swallows. If anyone knows that answer to that, let me know. 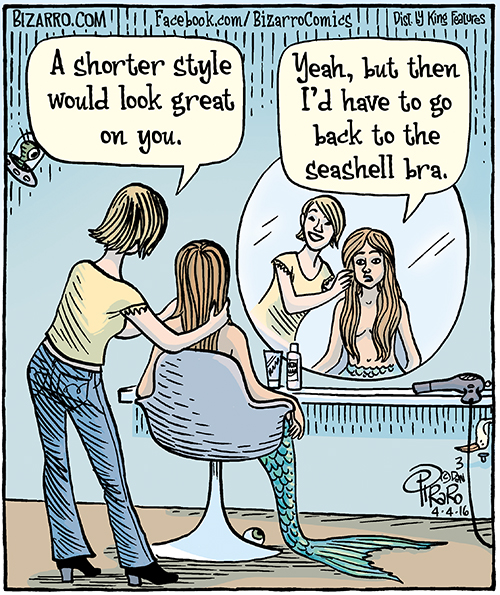 Did you American readers know that in European countries, people are not afraid of women’s breasts and allow them on TV shows and commercials? Did you European readers know that Americans consider women’s breasts to be obscene objects of terrifying sexual power? It’s all true! Accordingly, as an American, I’ve always thought it amusing the way producers will find clever ways to hide taboo body parts, like the seashell bra that mermaids wear unless their hair is strategically glued to their boobs. Here is an older cartoon I’m quite proud of that refers to the way the Bible books I had access to as a child used to treat Adam and Eve. 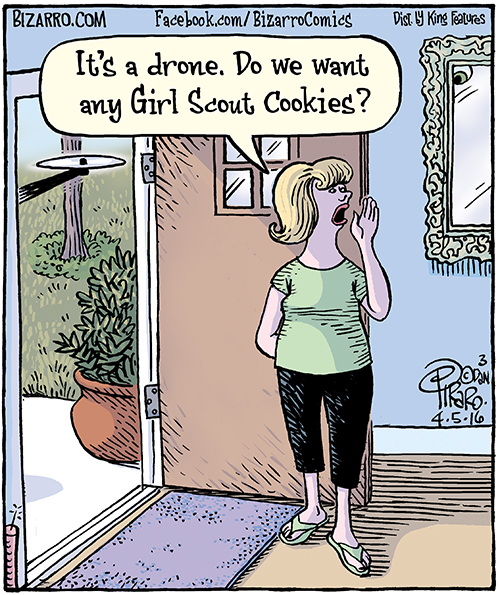 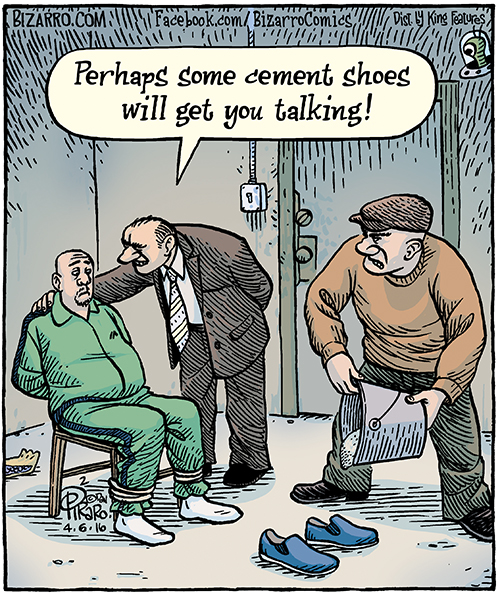 If you’re confused by this gag about the shoes it may be because you’ve not seen enough old gangster movies. There used to be a cliche that gangsters would tie a guy up, sink his feet in a bucket of cement, let it harden, then throw him into the East River. They called it “cement shoes”. The gangsters in this cartoon aren’t grasping the concept as clearly as they might. This is where the humor part is.

Another place where there’s humor is that in the horizontal strip version of this cartoon, I added a bag of cement on the right called “Mobster’s Choice Cement,” as seen below. 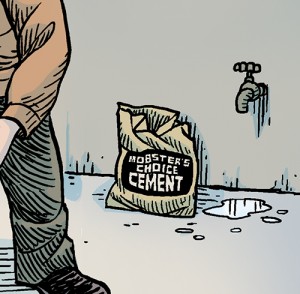 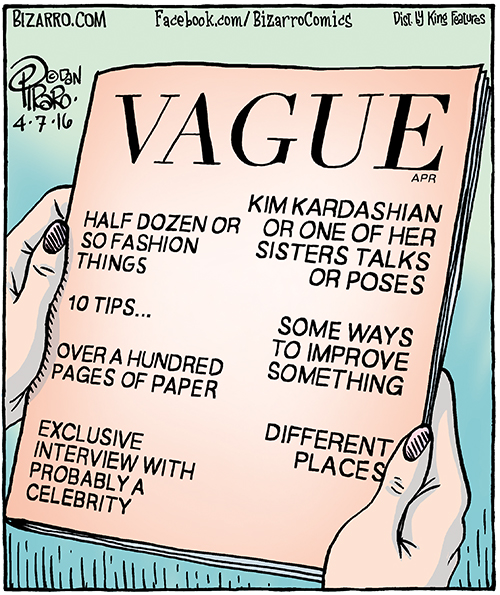 An email friend of mine, a retired gentleman who enjoys doing comics of his own, sent me a comic he did of “Vague” magazine. I liked it so much I asked if I could do my own version of it and he happily agreed. So here’s my take on it, very similar to his but with a few different subheadings. Hope you enjoy it as much as I do. 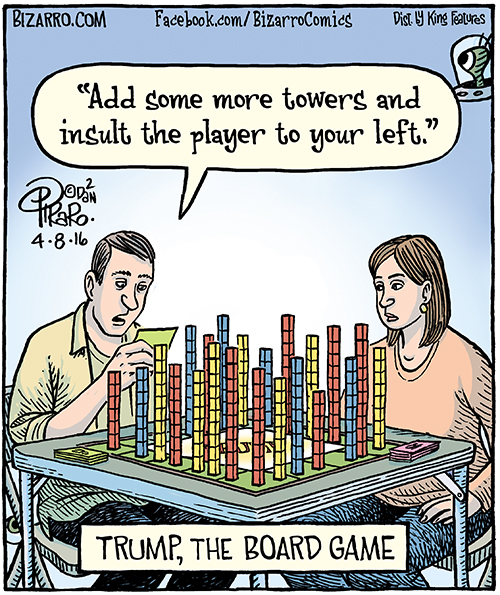 Tons of people really loved this Trump cartoon and many pointed out that there actually has been at least one Trump board game on the market. Of course there has. Why didn’t I just assume that? If it can have the name Trump printed on it or carved into it, The Donald has marketed it.

My conspiracy nut cartoon above was published on April 9th. Elsewhere in the newspaper cartoon world, my friend and colleague, Dave Coverly, published the cartoon below in his feature, Speed Bump on exactly the same day.

Neither Dave nor I was aware of the cartoon the other was going to publish on April 9th. Was this an uncanny coincidence, or were there government agents secretly influencing our thought patterns by spraying us with experimental chemicals via those long, white trails that jets leave in the sky? Savvy readers know the answer. (I am winking now.)

Want to get a unique gift for yourself or somebody you love or despise? How about a super high-quality print from a real live art gallery that was hand-signed by the same hand I use to draw cartoons? No, it’s not a dream, you are awake and this is a real thing. A Los Angeles art gallery is selling a small handful of my favorite cartoons as limited-edition, signed and numbered prints. Each and every one has been on my own kitchen table. Grab one now, before the “limited edition” part kicks in and they’re all gone!