Comics have a lot in common with poetry: the way a comic strip is limited by its structure and dimensions is not all that different from a poem that follows a series of formal rules. It’s no surprise, then, that lots of our cartoonists are also big fans of poetry! I asked our cartoonists to share poems they love, or times they’ve worked poetry into their comics. 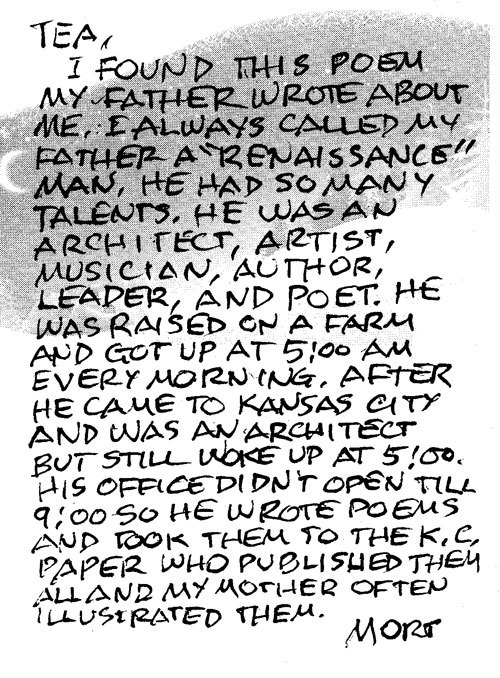 This won’t exactly put a lilt in your step today, but this is a poem that has stayed with me for many years. At its core it’s a poem about gratitude.

I got out of bed
on two strong legs.
It might have been
otherwise. I ate
cereal, sweet
milk, ripe, flawless
peach. It might
have been otherwise.
I took the dog uphill
to the birch wood.
All morning I did
the work I love.

My personal favorite poem is:
“Spring is sprung, the grass is ris
I wonder where the boidies is
The little boird is on the wing
But how absurd
The little wing should be on the boird.”

As you can see, young Tater Smith prefers “Hop On Pop” and the many other poetic writings of Dr. Seuss…and I have to agree with him! Dr. Seuss had such a creative, wonderful way with words–he has always been one of my favorite writers.

Fun Fact: I started my creative life as a teenage poet. I had a few poems published in obscure poetry journals in the early 1960s –mostly haikus.
Here are a few cranky old man stabs at poetry from recent Zippys. I hear America Dinging! (I’ve always loved Walt Whitman—hope he forgives me)

Are you kidding? Dennis Mitchell is the POET LAUREATE of the comics page.

Here’s something special I’ve worked up: a parody of “Hamilton” featuring the cast of “Fastrack.”

[FI]
How does a Gothic, tattooed,
Freak who deplores
Business dress codes
Caught in the middle of a
Corporate slot in the outer office of an ogre
Overworked, rejected,
Grow up to be respected?

[WENDY]
The ten-hour days of glowers; she never cowers
When a shower of papers becomes a tower
Despite the boss’s sour
Moods she found inner power
Under fluorescent lights she attained a
Deathly pallor.

[BUD]
And every day while tech workers slaved over crucial coding errors
She kept us productive by keeping the bosses away
Finding office supplies by scavenging E-Bay
And freeing us from human contact and other terrors.

[ART]
Then the Recession came, and layoffs were the bane
Of every middle manager with an office to his name
She worked her cursor in a furor and helped to stop the drain
Saving jobs that would’ve vanished leaving nothin’ but a stain.

[MS. TRELLIS]
Well, word got around, they said, this girl is deranged.
Though she hardly looks the part she can play the corporate game
Keeps the gears a-moving; sets the spreadsheets on a flame
And the company will know your name. What’s your name?

This year I’m going to my favorite pulp writer of the 1930’s, Robert E. Howard.
For anyone unfamiliar with Robert E. Howard, his most popular creation was Conan the barbarian – a classic pulp fiction character if ever there was one.

This  link is to his poem “Solomon Kane’s Homecoming”.

The recording came with the hardcover collection “The Savage Tales of Solomon Kane” (1998). It was illustrated by Gary Gianni, who illustrated King Features’ own Prince Valiant for a number of years – and beautifully so.