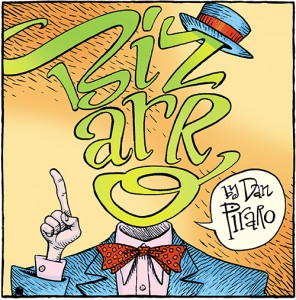 (To enjoy a more embiggenated version of this cartoon, click it twice less than thrice.) 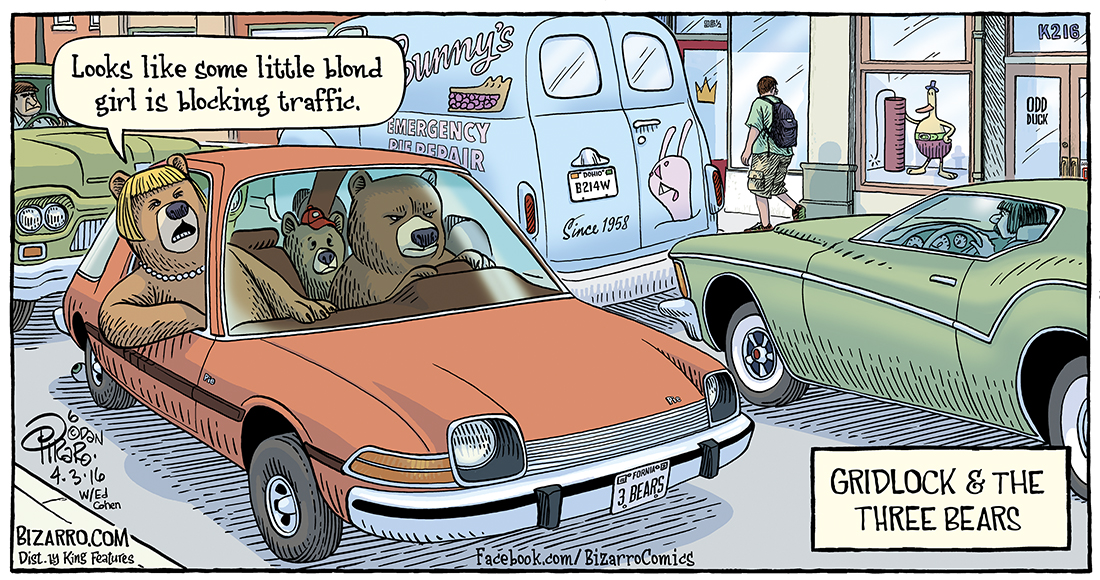 Bizarro is brought to you by Terror Therapy.

As my faithful Jazz Pickles know, I enjoy the occasional pun as long as it is unpredictable and suggests a good picture. This is one such pun, suggested by my friend, Ed Cohen. Ed gave me “Gridlock and the Three Bears” and I came up with the rest. I had a great time illustrating the classic cars, of which I am a fan but cannot afford a warehouse full of like my comedy colleague, Jay Leno has. (The limit of my current budget is one vintage motorcycle, a ’73 BMW.) I think Bunny’s Emergency Pie Repair truck is amusing, as well as the Odd Duck storefront in the background, and I have always been a fan of the AMC Pacer, one of the strangest little cars ever to be mass produced. (People who hated it said it looked like a “pregnant toaster,” but that was exactly why I loved it!) If you click the cartoon and embiggenate it, you will see that where those cars typically had a “Pacer” logo, mine says “Pie”. Other amusing-yet-tiny details are the Pacer’s license plate, which was issued in the state of “Fornia” and the truck’s, which is from a state called “Dohio”. As you can see from the small number above my signature, there are six secret symbols to be found in this cartoon, as well. 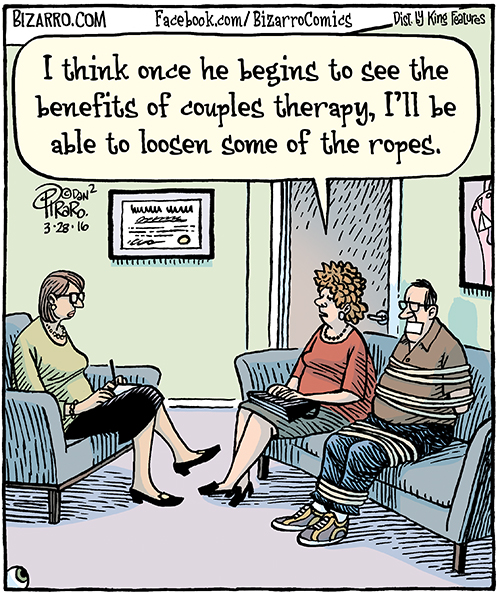 It is no secret that women tend to enjoy couples therapy more than do men. I think men mostly just want to be left alone to do their thing and leave it at that, whereas women tend to want to tinker and improve “the relationship”. Some might say this is a sexist viewpoint but it has been my experience that things tend to go this way in heterosexual relationships. (I’ve never been in a gay or lesbian relationship, so I’ve no idea if the principle applies there.)  I’m a bit different from most men in that I actually enjoy all kinds of therapy––individual and couples––up to a point. I think it is because I am just egotistical enough to enjoy talking about myself without fear of too many interruptions, even if I have to pay the person to do it. In that regard, I prefer individual therapy over couples therapy, because I get to talk more. 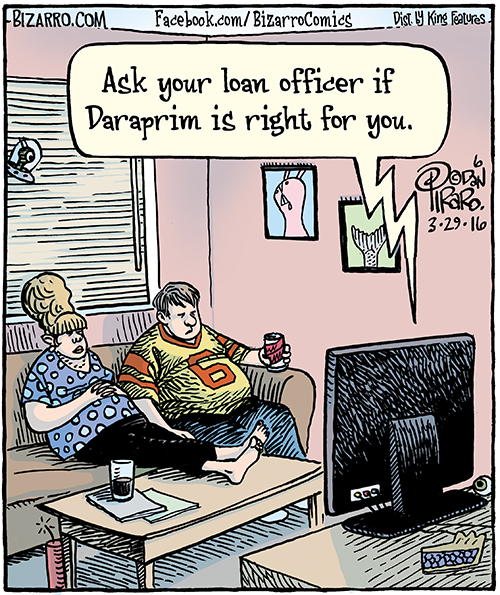 Some readers were confused by this Daraprim cartoon. You may remember that in September of 2015, some hedge fund manager and colossal asshat named Martin Shkreli started a pharmaceutical company, bought a 62-year-old drug called Daraprim from whatever company owned it, and instantly raised the price from $13.50 to $750 per pill. In spite of the uproar it caused, he refused to change the price and smirked his way through the ensuing media frenzy and theatrical sham of a Congressional hearing. It’s not all bad news, though, because in early 2016 he was arrested by the FBI for securities fraud. But that news isn’t as good as it sounds, because he’s out on bail now and will likely escape any real jail time, as that is typically reserved for people without as much money as he has.

The truth is that this kind of pharmaceutical price gouging has happened to other drugs, too, and that what it actually represents is what relatively-unregulated capitalism has done to our healthcare system. In spite of the grandstanding, almost no one in government or the healthcare industry is actually willing to do anything about this kind of thing, as we saw by the way Republicans gutted Obamacare before passing it.

Here’s a fun exercise you can do at home: attempt to explain the American healthcare system to a European and watch their head explode. Be sure to do this outdoors so the cleanup will be easier. 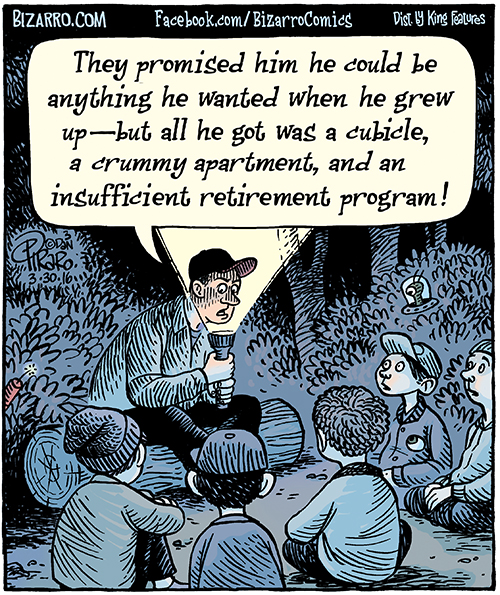 Here’s a gag that represents something I’ve been thinking a bit about lately. When you grow up in America, you are regularly told that if you work hard enough, you can become anything you want to be. That’s patently untrue and has, in my opinion, created a country full of people who are deeply dissatisfied with the fact that they are not getting anywhere. The truth is we all have to work our asses off just to get by, and most of us will only do that: get by. If you can manage it without having to dedicate your life to a job or jobs that you totally hate, you’ve beaten the odds. The playing field isn’t level and the rules are stacked against your ever escaping the social class in which you were born. And that’s the best you can expect; in other countries it is mostly far worse. The question is, do we tell children that or keep encouraging them to magically ascend to a life of Kardashian Fabulousness? I don’t know the answer, I’m just asking the question. 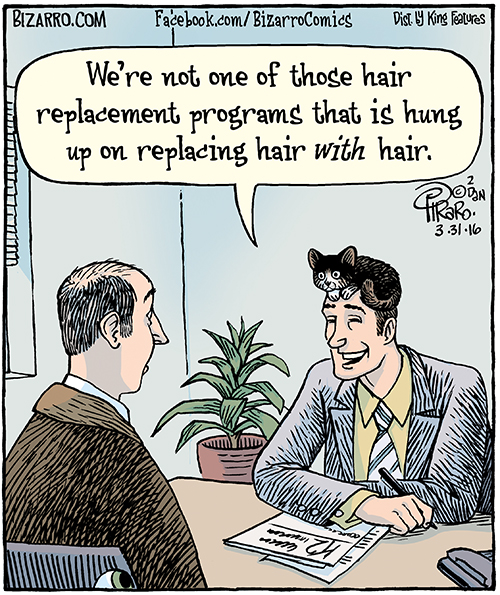 I’m a guy who enjoys living outside the traditional rules of society so this kind of hair replacement really appeals to me. Why wear a wig or have human hair sewn onto your scalp when you can wear a kitten? And believe me, kittens are real chick magnets. 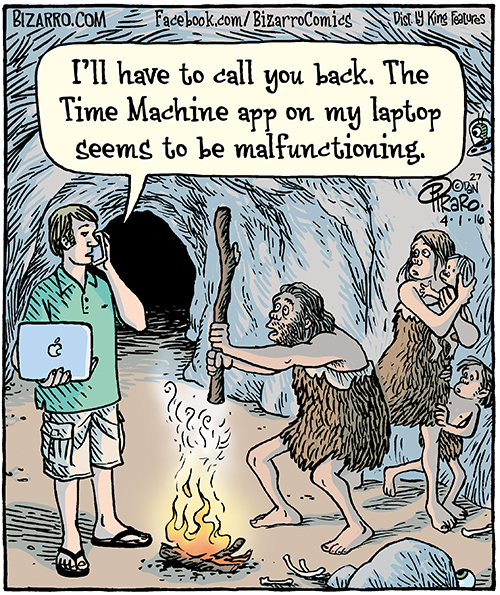 As I mentioned in the first paragraph of this post, the small number above my signature tells you how many “secret symbols” I have placed in a given cartoon. I’ve been doing this for many years but don’t be too hard on yourself if you’ve never noticed. You can read more about this practice here, if you like. In this Time Machine cartoon, I’ve put a “27” above the signature. If you have trouble finding more than two secret symbols, however, notice that the date of this cartoon’s publication is April 1st. 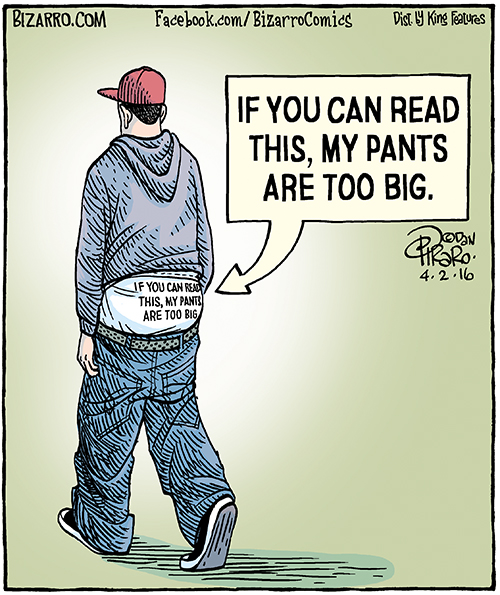 As I’ve said many times on this blog and even more often in real life, I still cannot believe that the rodeo-clown-baggy-pants-underwear-showing fad was ever popular, much less has lasted for more than two decades. There are actually adults alive today who cannot remember a time when people weren’t going around in absurdly, comically huge pants. Just last week here in Los Angeles, I saw two guys dressed like this working on the sidewalk in front of a local shop.

I based this joke on the popular bumper stickers of yesteryear––“If you can read this you’re too close”. I always wonder about people who put stickers like that on their car. Do they think other drivers tailgate simply because they did not know it was unappreciated by the person in front of them? Do people with “Baby on board” bumper stickers think other drivers will ram them indiscriminately unless they think a baby might get hurt? I think a bumper sticker that says “Explosives on board” would come closer to achieving the goal.

Last thing: A guy I know is selling limited-edition, signed prints of a page of my upcoming coloring book, to be published this fall. The image below comes in two different sizes and is very affordable. They won’t last forever, so grab one here!  (Note: the actual print does NOT have that ©DanPiraro2016 line across the top. That’s just for this web posting.)

Thanks, Jazz Pickles. Have a grand and groovy week! 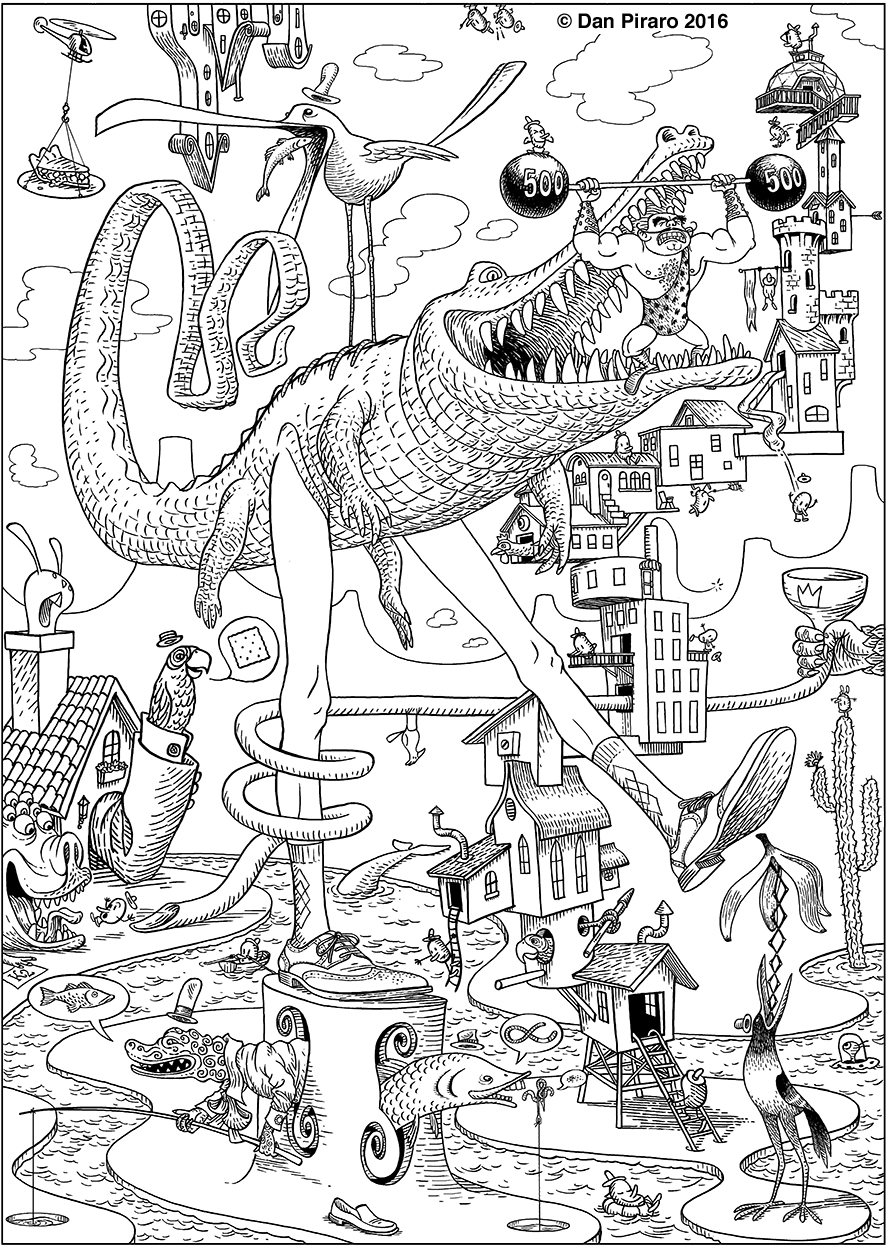