Ask A Cartoonist: The Battle for Control!

Call me mentally disturbed, but I hear voices when I’m at the drawing table. There’s a kind of battle that takes place among my characters, as each one insists I draw them today. Whoever makes me laugh usually wins.

Hank was constantly ‘breaking the fourth wall’ with DENNIS. Here’s an example from his DENNIS’ 50th piece. 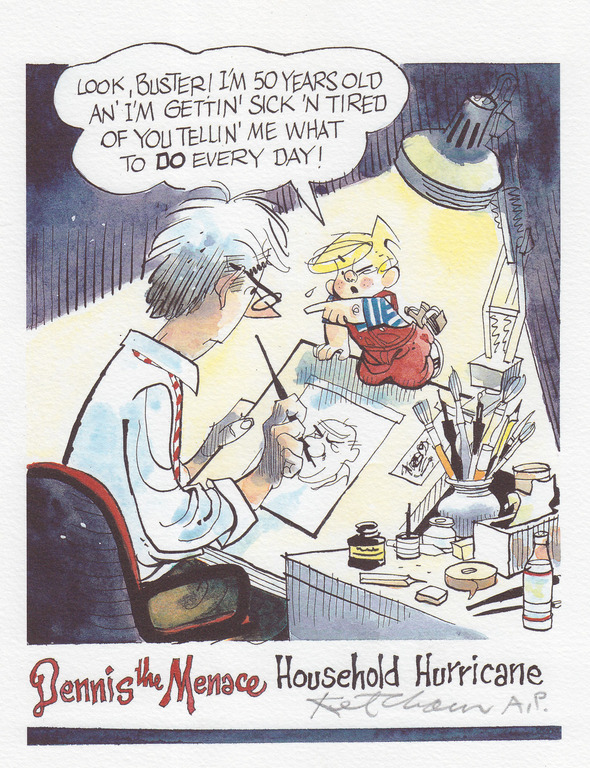 Within the corporate structure of Fastrack, Inc. none of the characters are really in control of their lives. However, I’ve found that they do exert final control of their existence in relation to the strip. Many times I’ve planned storylines that went in unexpected directions due to their strong personalities. The most extreme example of that occurred in 2010 when I introduced what was supposed to be a minor character named Dethany.

I started out in control of my characters, but now I just think of a situation and see how they would react. Lenny the lemming began as a simple, gullible character, but is now a bit more zen-like. The other characters (especially Oscar) underestimate him and I know I can get a strip out of giving them a situation where Lenny can surpass their expectations.

Great questions. I think I’ve reached a point where it’s about 70/30. The characters are in control 70% of the time. This usually happens when I’m writing story lines…I never know which direction they’re headed. It happens other times, too, especially when I don’t have a clear writing direction. I love this organic way of writing and of being surprised. On the other hand, when I do have a clear-cut idea, I’m more in control and I sometimes bend the characters’ personality to make a gag work.

Apart from the TV, Dustin doesn’t have control over much in his life, but I think of him and all our characters as real, living people.

As for who’s in control of the strip, I like to think of myself as “the director.” Once I receive Steve’s scripts, I set the scene, introduce the props, costuming, lighting, and pace the action. Then, like all good directors, I sit back and let the characters play their part.

For me, personally, once I come up with a topic I want the comic strip to be about, the characters kind of take control at that point and write the script themselves!

I hadn’t set out to break the 4th wall, but when I was writing this one strip, I could swear
that Tina asked for it…. in the past I would not have listened, and probably would’ve taken this
particular strip in another direction, but lately I’ve been seeing my strip through different glasses. 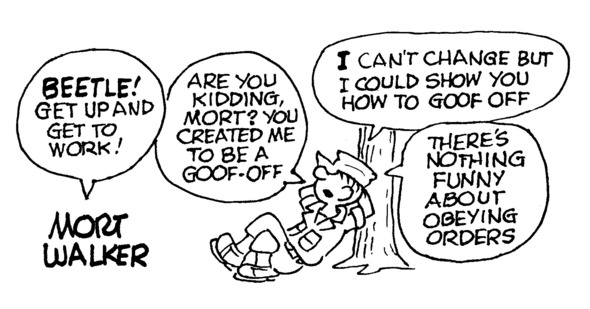