Ask A Cartoonist– Near Misses!

It’s National Near Miss Day!  In honor of the day, I’ve asked our cartoonists to share some of their “near  misses” with us!

OK, you want “near miss”? Back in 1978, when I was doing Zippy weekly for the Berkeley Barb and was friends with B. Kliban, the “Cat” cartoonist, I came up with a sure-fire failure of an idea for a new strip.

The idea was cats, but not wacky, cute cats—-cranky old Yiddish cats—-“Katz”. It was partly inspired by the old daily strip, “Abie the Agent” by Harry Hershfield.

“Katz” ran for 3 weeks before the Barb mercifully pulled the plug.

Bill Holbrook, Kevin & Kell, On The Fastrack, and Safe Havens

Many years ago I submitted for syndication a strip called “Winston Lewsome” about a young man in the Big City. I’ll never know whether it was a “near miss” or not, but the very next year I took some of its more successful elements and created “On the Fastrack.”

I opened a cartoon museum in 1974 in a neighbor’s empty mansion in Greenwich, CT. It was an immediate success with visitors coming from all over the world. The traffic was so heavy that the owner said was wearing out his house and wouldn’t renew our lease. We found a nearby vacant castle in 1977 and bought it so we couldn’t get kicked out. We were there for about 15 years until the 100 year old building started falling apart. We didn’t want anyone to be killed by the falling stones!

We started searching for a new location. Florida was creating a new 3 block outdoor mall and invited us to join it. I have a degree in architecture and contributed my talents to a “belle of the mall,” until two of our donors went bankrupt and we had to sell the building.

Well, I came back to CT and discovered an opportunity to bring a cartoon museum to the Empire State Building. But that fell through, too! That was my last “near miss.” I gave my collection of about 50,000 original cartoons to Ohio State University who had a cartoon research library and had a great building available. I wish them a lot more luck than I had!

I guess Mr. Wilson completely misinterpreting a situation falls under the category of a near miss, right? 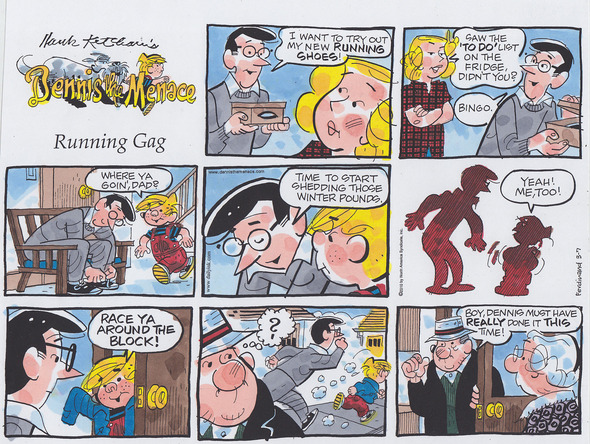 Here’s a near miss… for employment!
Back around 1994 (when this was drawn) I worked for Waldenbooks. We were required to sell a certain number of “Preferred Reader” cards per month, and to not meet your quota could land your job in jeopardy. This was incredibly frustrating, because for each customer’s purchase, you had to give a sales spiel, and the single most oft-used return comment from a customer was “I don’t buy that many books.” Sooooo… I drew a comic about this and made copies of it and hung a few up in the store to make my co-workers laugh, one of which was at the register. My manager didn’t find it amusing when she came in, I got in serious trouble and I nearly written-up for not only making the comic, but for hanging it up in plain site for customers to see and *GASP* get offended! (P.S. I totally stuck it to the man and sold the HECK out of some cards that month.) 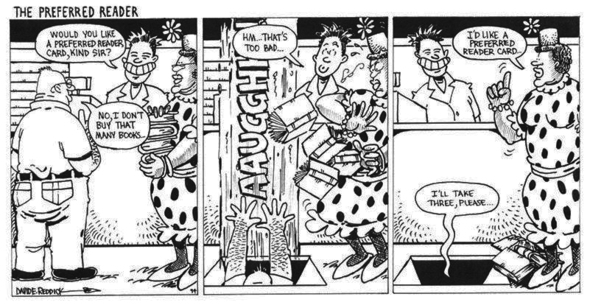