In this column, I peruse the fourth of the great Alex Raymond’s creations, hard-boiled genius detective Rip Kirby.

Tomorrow marks the seventieth anniversary of Rip Kirby’s start. It was just the right sort of strip for the times, when postwar sensibilities looked for more sophisticated entertainment, like the rise of the film noir genre of detective films. Of course, Raymond was even then considered one of the greatest penman ever, so his first effort after leaving wartime service with the Marines was anxiously awaited. He’d done Flash Gordon and Jungle Jim for ten years, (1934-44) and was anxious to try a new theme. He had also drawn nearly the first two years of Secret Agent X-9, so he had some experience in crime-fighting stories.

The series was an instant classic, and Raymond was as good or better than he’d ever been.  Kirby was an unusual private eye, sort of a smattering of several contemporary fictional gumshoes of the time. He was a scientific like Craig Kennedy, had an ex-con valet like Boston Blackie, had seemingly endless amounts of money and could go anywhere like the Saint, and could out-shoot or punch out any opponent like, well, any of them.  All detectives are handsome, but Rip’s appearance was unusual in that he had weak enough eyesight to use glasses.  In the comic strip adaptation of Craig Kennedy, he’s shown wearing glasses, too (albeit pince-nez!), so Rip wasn’t first.

Here are some Rip Kirby items that have yet to be included in any collections: 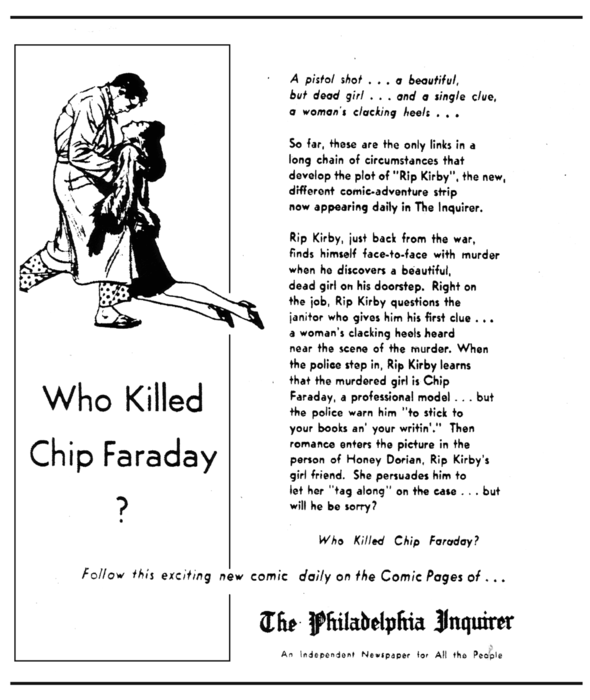 The Philadelphia Inquirer ran this big pulp-fiction-style pitch
during the first Rip Kirby story in March 1946. 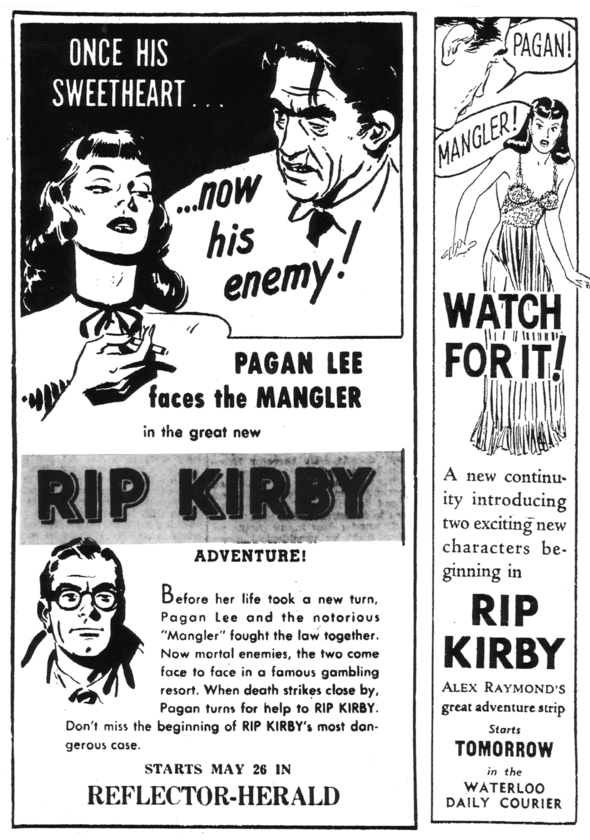 Sometimes, with a popular continuity title, separate promotion for a new story would be issued.
Here are two for a 1952 serial. 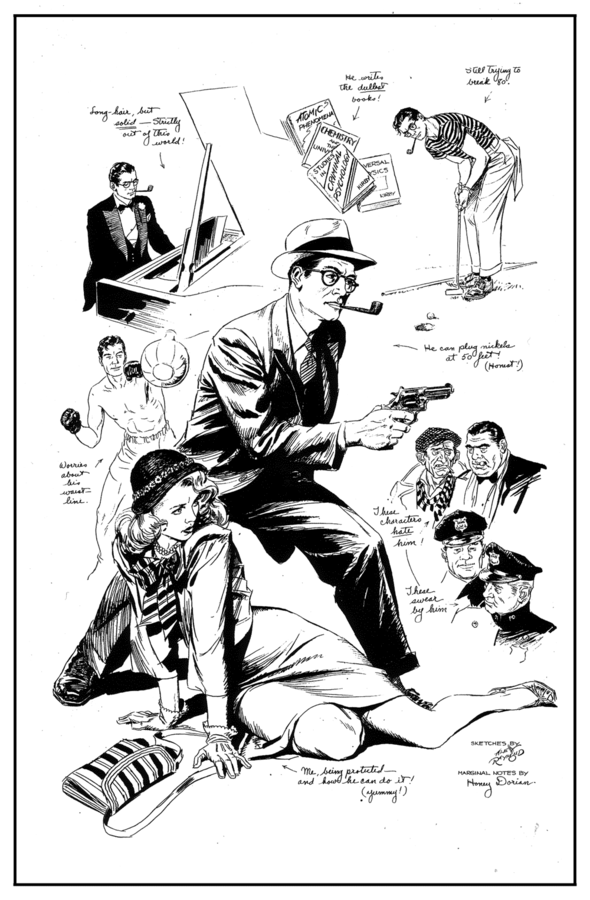 A sketch from the first Rip Kirby press kit, 1946 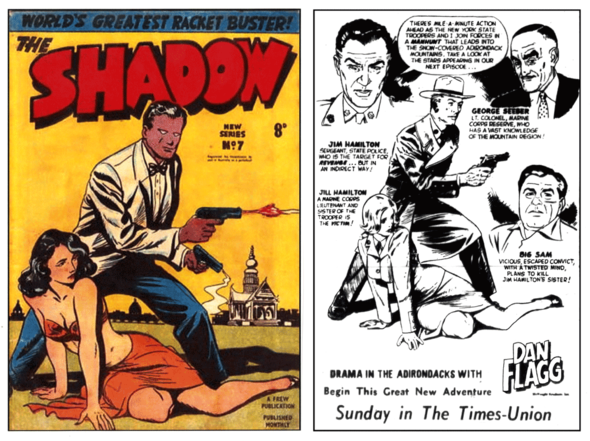 Raymond was more influential than you might think. Above, the first is a sketch showing Rip guarding over his girlfriend Honey Dorian that was used in the first Rip Kirby press kit, 1946. It became the definitive image of Rip.  Second, the Australian publisher Frew had several comic book stars that all wore masks. Their top property then and now is Lee Falk’s Phantom. Their own home-grown assortment of heroes all wore masks, too, as if they were part of Mr. Walker’s far flung kinfolk. They had a Phantom-like cowboy, a Phantomesque crusading knight, and here, an unlikely mystery man of adventure  who wore a dinner jacket and a  false face that appeared to engulf his whole head. He had nothing to do with Lamont Cranston, but he was also known as The Shadow. Here’s his comic book of March, 1955. Are Aussie comic characters as strange as their animals? I’d never say such a thing. And last, a promo for the McNaught syndicate strip, “Dan Flagg,” from March 1965. How could the artist, Don Sherwood, hope get away with it? 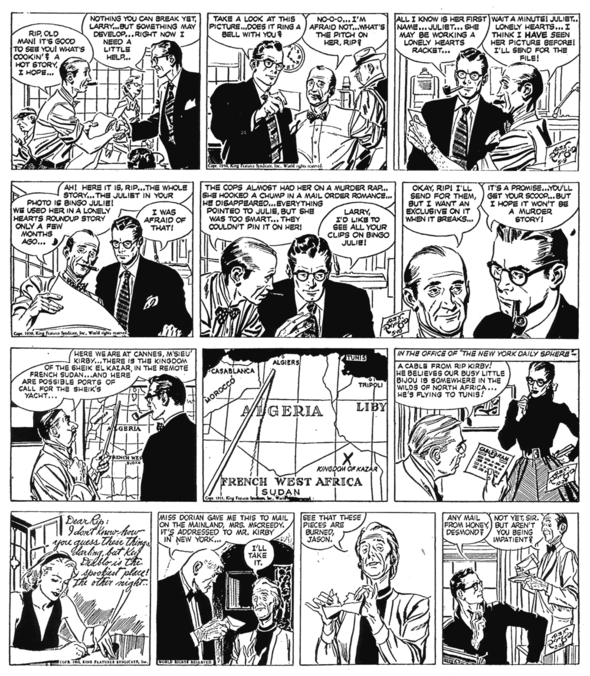 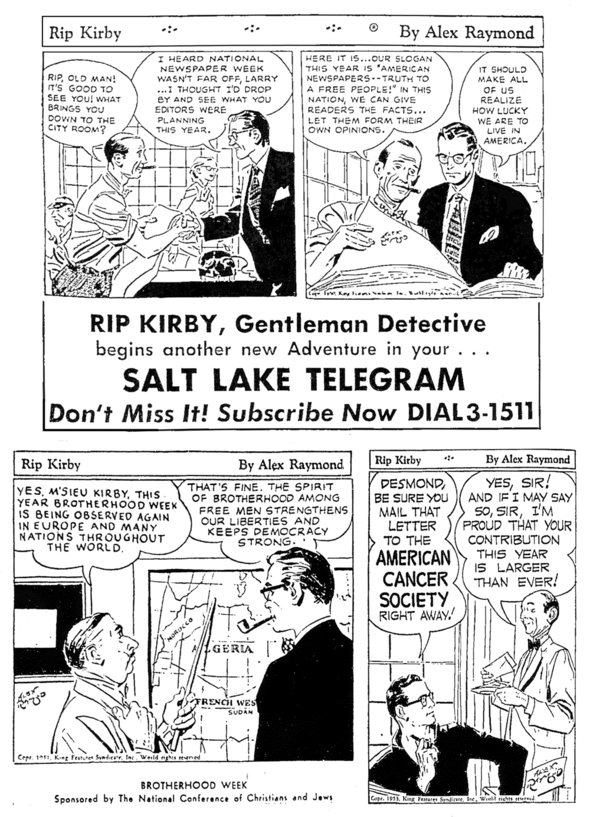 Above: The same RIP KIRBY strips warped and overhauled into PSAs: the 1950 examples become a message about press freedom and do double duty as a pitch for the Salt Lake Telegram. Next, an awkward fit for Brotherhood Week, and last, the American Cancer Society puts a panel to use.

Glad to help you out on the little comic books. I wish the comics were popular enough to do that now.

Sorry we gypped you out of a cartoon- glitches will happen. Even WE make mistakes.  But sometimes we have the capacity to patch it up. Here’s the US HUSBANDS and ironically named  “MISTAKES WILL HAPPEN”  page that got lost: 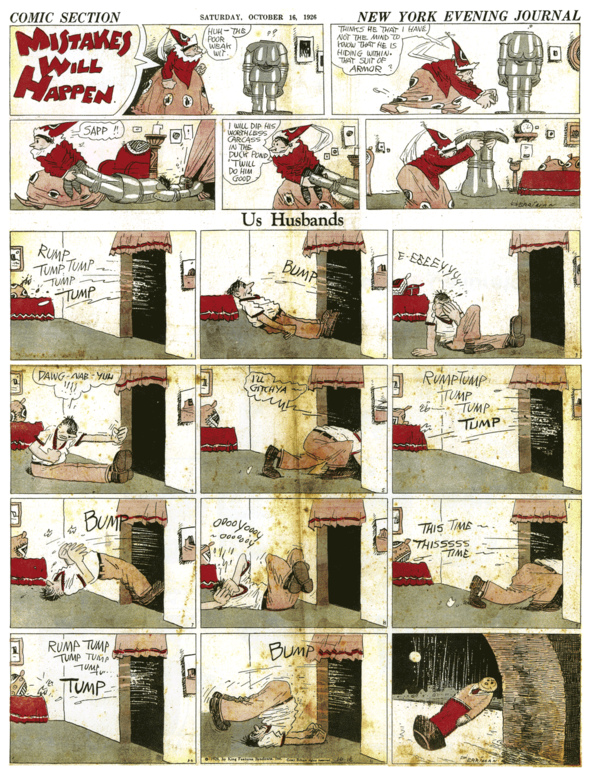 I don’t know why the complete STUMBLE INN hasn’t been collected. It is a hard-to-find title, it’s true, but it could be done. Maybe it just doesn’t rate. It seems very derivative of other strips, certainly the Dingbat family comes right to mind. Outside of being by George Herriman, there’s nothing so special about it. I took a poke at it here back in 2012:

As far as for whom might be I, just call me Mr. Archivist. Look–it even says so on my birth certificate–below is a copy of it.

If it didn’t show up, it’s another of those dratted glitches.