Zippy connects with his Blue Plate Special every Friday at the Existential Diner in downtown Dingburg. 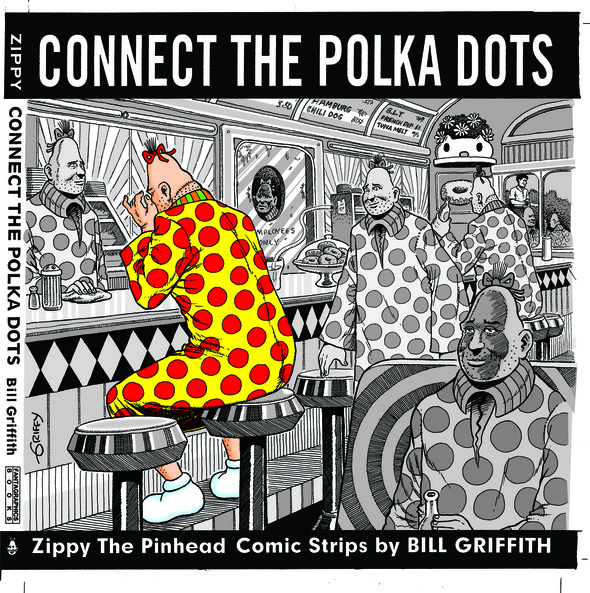 My greatest connection in the comic world was Dik Browne. I had created a new strip called Hi and Lois to relate to Beetle Bailey. I was afraid that my Army strip about Beetle might die when the war was over so I created a strip about family life with Beetle’s sister, Lois. Now I had to find a good artist to draw it while I wrote it. The comic editor ay King Features, Sylvan Byck, suggested we survey the field and find the best artist available so we agreed to look around and meet in a month with our choice. I read all the strips, ads and illustrations, made a list of contenders and met with Sylvan. To our surprise we both had chosen Dik Browne who had done a lot of ads and had a monthly strip in Boys Life magazine. A wonderful artist with a sense of humor. We tracked him down and found he worked in a crew of artists for an ad agency. We called the agency and got him on the phone. “Hello, Dik. This is King Features. How would you like to do a strip for us?” He responded quietly, “Yeah…okay.” and hung up. We were astounded at his lack of acceptance when our phone rang and it was Dik, “Did you just call me?,” he screamed. Then we got the excitement we expected. He thought one of his co-workers was playing a trick on him.That was the beginning of a lifelong friendship. Dik and I created a beautiful comic strip which sold all over the world. On the side we played golf together every week, traveled around the country speaking to crowds, socializing, and became the best of friends.

Dethany keeps trying to connect with her abrasive co-worker, despite the continual rebuffs

One of the best parts of the notoriety that being a cartoonist brings you is that lost friends from the distant past can find you and hook up again. It’s happened to me on numerous occasions. I’ve had several people with whom I was in graduate school at Florida State contact me. All PhD physicists who admire me for leaving the profession and becoming a cartoonist. They are all retired now, and here I am still going strong.

I just got back from a trip to Bilbao, where there were a lot more homeless than here in Hondarribia. I gave money to a beggar who was reading a comic book (V for Vendetta) and I chatted to him for a bit about comics. I shook his hand and he gave me an enormous smile. That was a great comics connection.

Comics have been a way that I have connected with our two daughters. Our older daughter, Meredith, may not be that much into reading comics, but she loves accompanying me when I get invited to comic cons and helping me at my table. She especially HeroesCon in Charlotte, NC. She loves the whole atmosphere of that con and the people she’s come to meet there over the years. I am always at a table near our good friend, Marcus Hamilton (Dennis The Menace dailies). She and I really enjoy visiting with Marcus and his family. Meredith also enjoys being a runner for Marcus and I and bringing us food, drink and news about what’s going on all over the convention floor. Our younger daughter, Sarah, really got into reading comic books, especially Archie, when she was ten years old. Taking her to our local comic book store a couple times a month really reignited my childhood interest in comic books. So much so that many years ago I ended up writing and inking Archie comic books for three or four years. Plus, it led to my interest in pursuing writing and illustrating a Snuffy Smith comic book story. Snuffy had not had a comic book story since 1970 when he had his own line with Charlton Comics. My dream became a reality when in December of 2015, Charlton Spotlight published my own Snuffy Smith comic book story “Hopalong Jughaid” in Charlton Spotlight #9. Check it out here: http://www.charltonspotlight.net

Sarah is now a Graphic Design major in her junior year of college and still has a strong interest in comics, both comic strips and comic books. Bodacious thanks to Meredith and Sarah for allowing comics to help make us even closer than we already were!