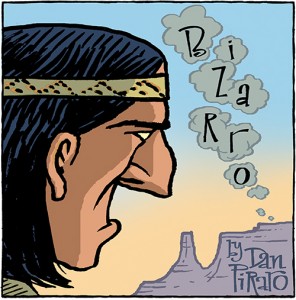 (Enjoy the delights of embiggenation by clicking any nose within an image.) 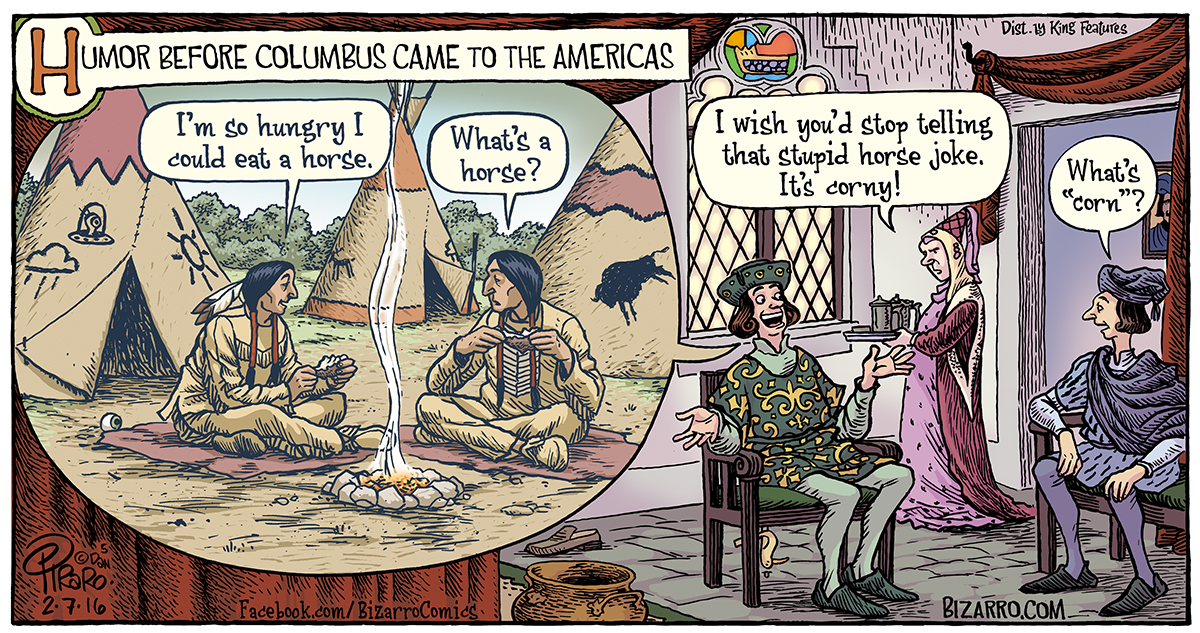 Bizarro is brought to you today by Deep Sea Jazz Pickles.

Today’s big Sunday cartoon is a history lesson wrapped in humor. Two historical facts that one must know to fully appreciate it are these: horses did not occur in the Americas before Europeans brought them, and corn did not occur in Europe until Indians smuggled it in disguised as straight, bumpy bananas wrapped in leafy husks. 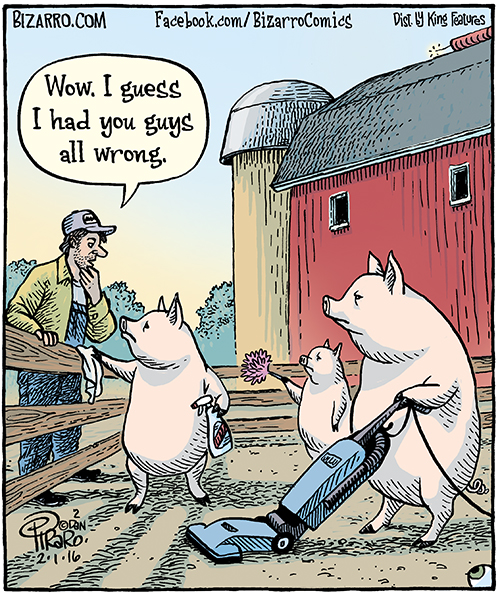 Regarding the cartoon above. English speakers often call an untidy person a “pig,” and an untidy space a “pig sty” but that’s only because pigs cover their bodies with mud to protect themselves from sun damage and insects. This is primarily due to the lack of availability of affordable clothing designed for pigs.  In truth, outside of the mud thing, pigs are quite tidy; they don’t poop in their living spaces (unlike most humans who have toilets in their homes) and they don’t cover their tables and desks with piles of papers and car keys and other forms of clutter. 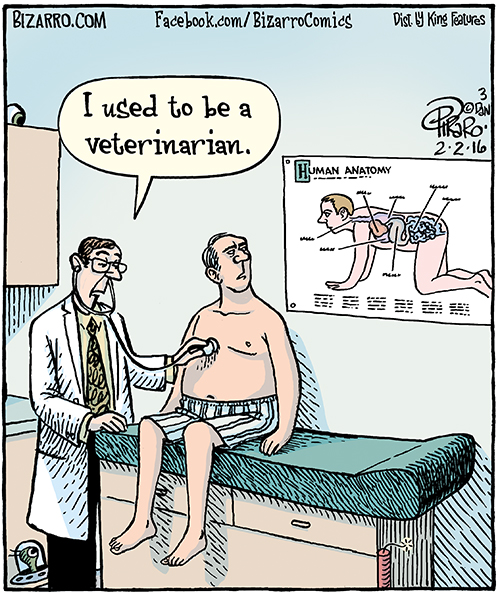 Say what you will about physicians who used to be veterinarians, they can be a very good source for an inexpensive, no-fuss vasectomy. As long as you don’t mind a few days of wearing a plastic collar. 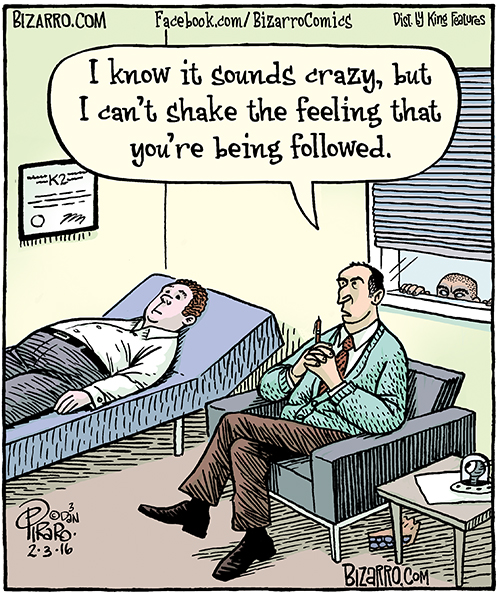 All I can say about the cartoon above is that if you can find a talented therapist who is also an authentic psychic, hang on to them. 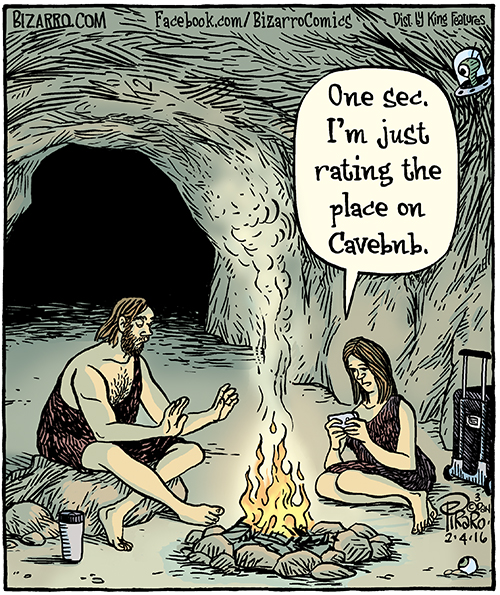 I wanted to create a cartoon that looked like it was about our cave-dwelling ancestors but was actually about modern people pretending to be cave people while on vacation. I’ve not heard of this actually happening but I cannot imagine that something like this hasn’t been marketed before. If it hasn’t, it’s only a matter of time before it is. Oh, and “Cavebnb” is a reference to a popular travel site called Airbnb. 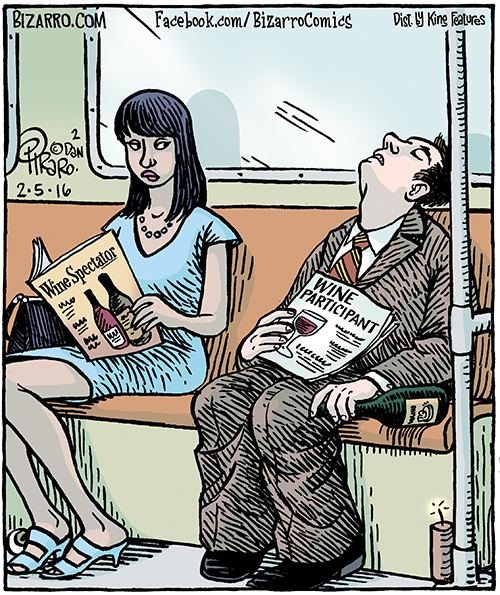 I’ve often thought that Wine Spectator (which actually exists) was an odd name for a magazine so I’ve added one called Wine Participant to give it perspective. WP is for folks who like to drink wine, WS is for those who are happy to watch others drink. 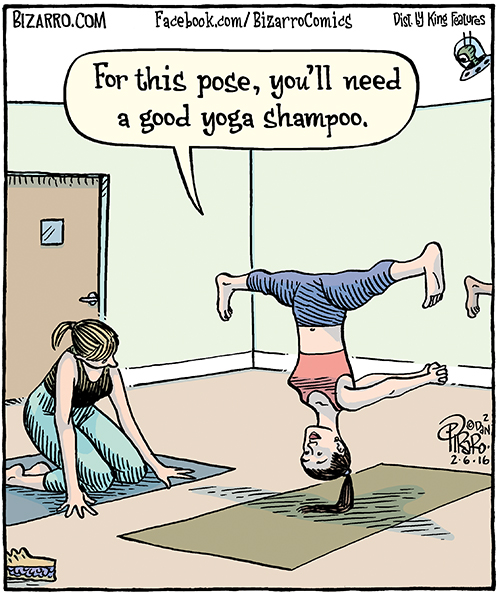 I recently attended yoga classes a few times a week for three years and always found what accomplished yogis could do (virtually always women, in my experience) to be anywhere from impressive to unnatural and gross. I envy them, however, as I believe that flexibility is an enormous key to living comfortably, especially as one gets older. But like most physical pursuits, genetics play a major part and after a few years of working pretty hard at it, I’ve resigned myself to the fact that I’ll never be particularly flexible. That’s not to say that I haven’t gotten a lot of good out of yoga. I met my partner, Olive Oyl, there (who used to be able do the ponytail pose illustrated above but wears her hair shorter now so has to balance on a can of soda) and I also got my dog from there after a fellow class member had rescued her off the mean streets and was looking for someone to adopt her. She’s pretty good at yoga, too, though when company comes to the house she has a problem with “down dog” until her excitement dissipates a little.

That’s the weekly roundup of Bizarro cartoons, Jazz Pickles. If I make it until next week, I’ll do this again. Good luck!