Everybody here at Comics Kingdom loves our pets!  And animals of all shapes and sized have long been an indispensable part of comics everywhere!  This week, I asked our cartoonists to tell us about their pets– or their characters’ pets!

Dogs and cats have always been part of our family. Each one, over the last 50 years, has had a unique personality.

Our daughter and son have carried on that same appreciation for pets into their families.
A couple years ago, we lost little Bogey. 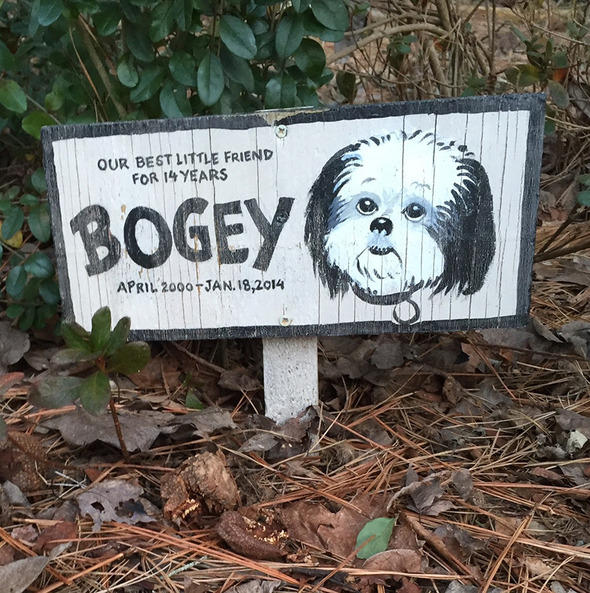 He was so special… I had included him in one of the Dennis panels. 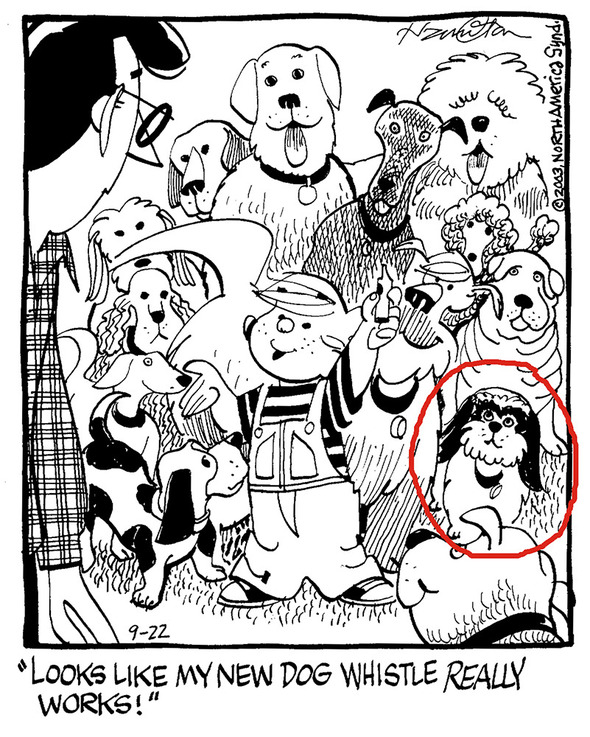 After losing him, Kaye and I decided we didn’t need any more pets…losing them was too emotional.

But, our son in California kept insisting that we DID need a new little family member. In fact,
he called one morning to let us know he had searched for Shih Tsu puppies on the internet and found that 3 puppies were available in our community. After seeing the picture of the little puppies, we took our grandson on a short “mystery trip” to let him help select one for us. Mini became our new family member.

Then our daughter’s family insisted that little Mini needed a playmate.
So….now Buttons and Mini are bringing so much JOY into our daily lives.

There are two “pets” in Zippy’s world. One is “Dingy”, his angry cat. he other is “Starhound” the celebrity-sniffing dog. Starhound can smell and locate Justin Bieber from 100 yards!

My own current pets, Max and Lucy, are two friendly felines who sleep with me and my wife when not demanding Fancy Feast Seafood Platter. 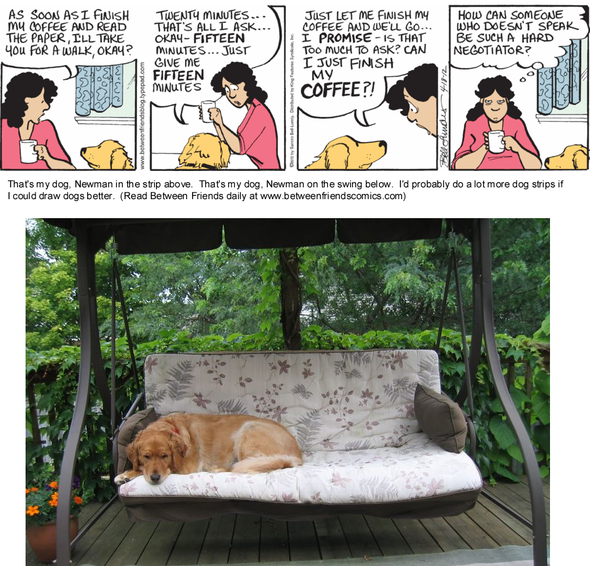 Spencer has had several pets…

I don’t have any pets anymore, though most of my children have pets, and they come by with them.

I also have birds and squirrels who come to my door for food every morning and they’re like pets. But my main pet is my comic strip character “Otto.” based on my New Yorker cartoonist friend, Otto Soglow. Otto was short and feisty. When he’d get up to talk at a meeting, someone would always tease him by yelling, “Stand up. Otto.” He’d yell back. “I AM STANDING UP!” It always got a laugh. Anyway, I named Sarge’s dog after him and he’s become one of my favorite characters.

Here’s Count Weirdly with a couple of pets! 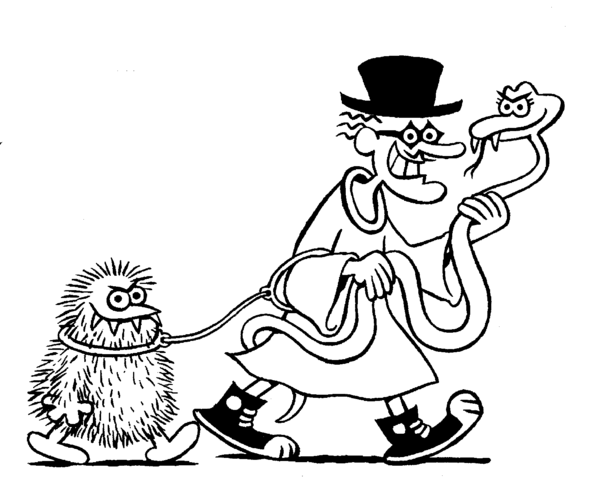 The most prominent pet in “Fastrack” is Dethany’s companion Lenore, the raven who was hatched back in 2012.

Her arrival is the featured event in the latest “Fastrack” collection

We took our Jack Russell, Billie, on the train to Paris (6 hours from Spain). He didn’t mind that, but he wasn’t keen on the Paris Metro, as we had to carry him in a bag. He did enjoy going into all the bars, cafes and restaurants with us and was very impressed with the Palais Royal art installation. 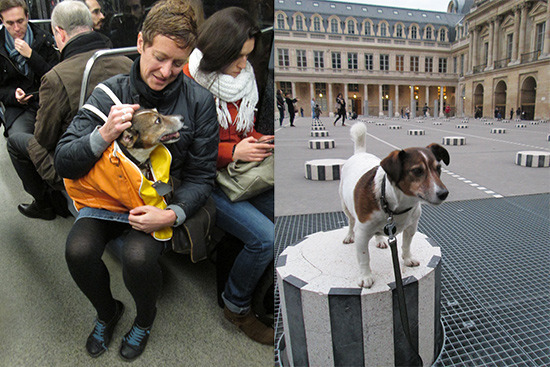 Without a doubt, Snuffy Smith’s best friend is his dog, Ol’ Bullet. This is one of my favorite drawings I’ve done of the two characters together. It ran in a Sunday Page I created in October of 2014.

“These are my two ‘assistants’ Laddie and Cookie. The can be pretty difficult to work with, especially when I haven’t taken them for their walk” 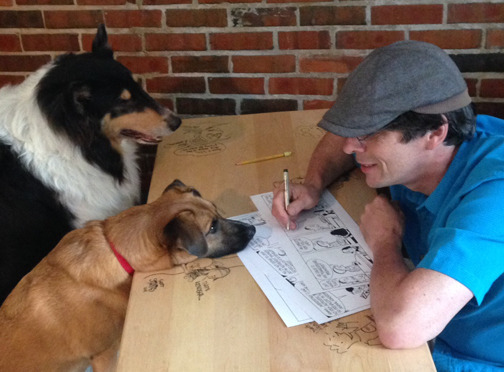 I have always lived with and loved animals including many fabulous cats and a few great dogs over the years. When my daughter was in high school we adopted a cat from the local shelter. She turned out to be pregnant and we ended up with a litter of four kittens. Two went to friends, but talk about Sophie’s Choice… I couldn’t decide between the kittens so kept the other two. One sadly passed away a couple of years ago, but we still have the mom, Spacey and her son Conor, who keep me company when I write and draw and just about everything else I do. This is a pic of them on the couch where I draw, and the cartoon is one of many they inspire, this one on how they love to curl up with me. 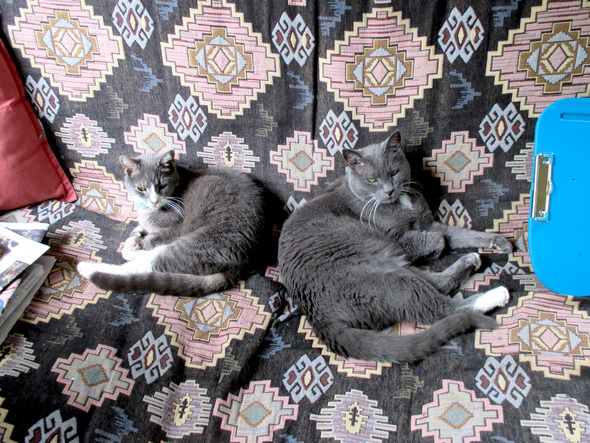