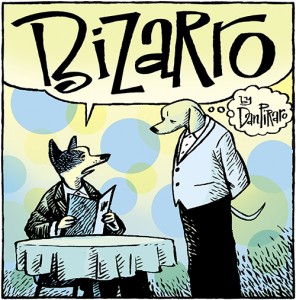 (To experience these cartoons with embiggenation, click any blueish color in an image.)

Bizarro is brought to you today by Con Artists.

Dogs are experts of human psychology. They wheedled their way into our families tens of thousands of years ago by convincing us that they understand what we are saying, what is important to us, and how we live. When we are present, they are model citizens and can easily distinguish between your new Prada shoes and a shoe-shaped chew toy. But somehow, as soon as we are gone, they forget which is which and chew the Prada into a shape that is useless to the human foot. You may find pieces of it in a different form out in the yard the next day, but like Humpty Dumpty, there’s no putting it back together again. When confronted with this crime, your dog looks as guilty as O.J. did in his Bronco during the infamous slow-speed chase. This would seem to indicate that your dog knows they’ve done something wrong. But here’s where it gets wonky: if you accuse them of something they didn’t do, in fact, could not have done, like forget to pay your Internet provider and now your wifi has been shut off, they’ll look just as guilty. Do they understand culpability, or do they simply know that when you’re angry, looking “guilty” will garner them some leniency?

In spite of all of this, or perhaps because of it, I still love dogs and never want to live without one. Perhaps I have a weakness for con artists. 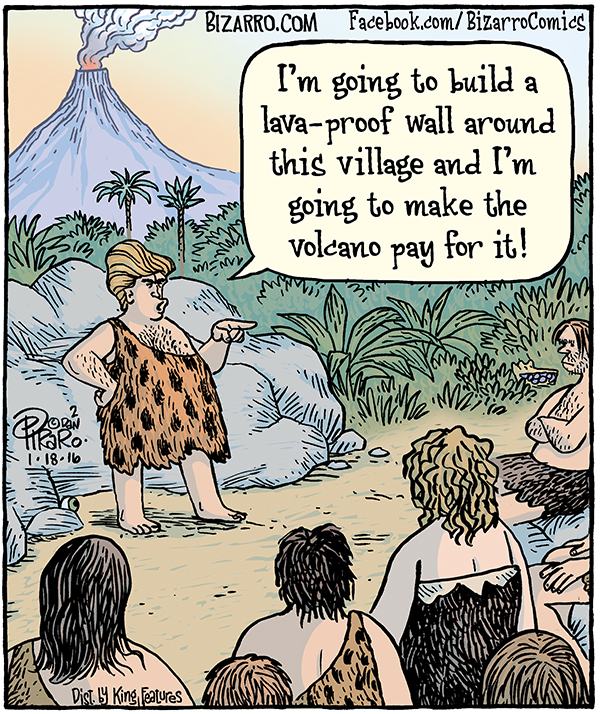 Speaking of con artists, I got a lot of positive mail from folks who loved this Caveman Trump cartoon. I got one bit of angry mail asking why I never make fun of Hillary Clinton. Ideology aside, the simple answer is that Clinton is not ridiculous. She doesn’t give comedians irresistible invitations to attack her the way Trump does, and has for a couple of decades now. He’s always been a bloviating carnival barker, a reality show clown, and a shameless publicity hog. To professional humorists, public figures like this have a target painted on their forehead. I don’t make up the things Trump does and says, I just illustrate them. And believe me, he appreciates every molecule of attention he gets without regard to whether it is positive or negative. 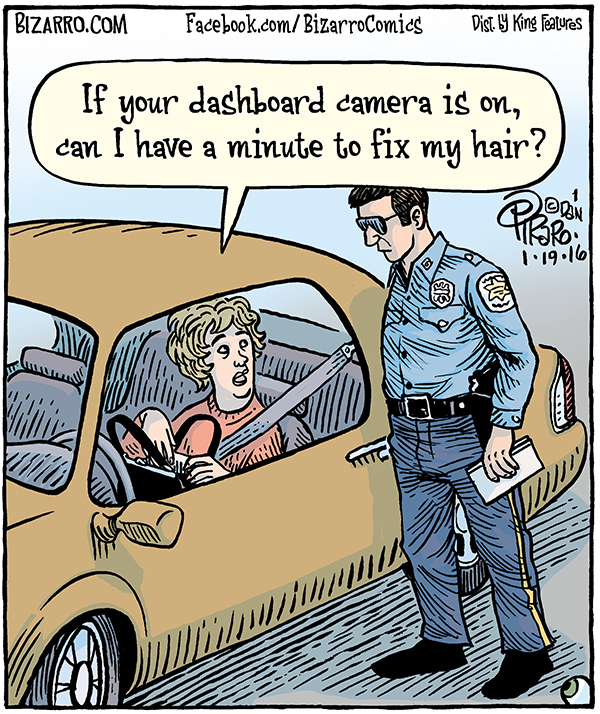 I originally conceived of the cartoon above as a guy getting arrested in his home with a camera crew follows the cops through his front door, as though it were happening as part of one of those voyeuristic cop shows. Showing all that action was too complex for a one-panel cartoon so I shelved it. Then police dashboard (and body) cameras were in the news a lot and that gave me a simpler way to portray it. Just a bit of background trivia for readers who enjoy that sort of thing. 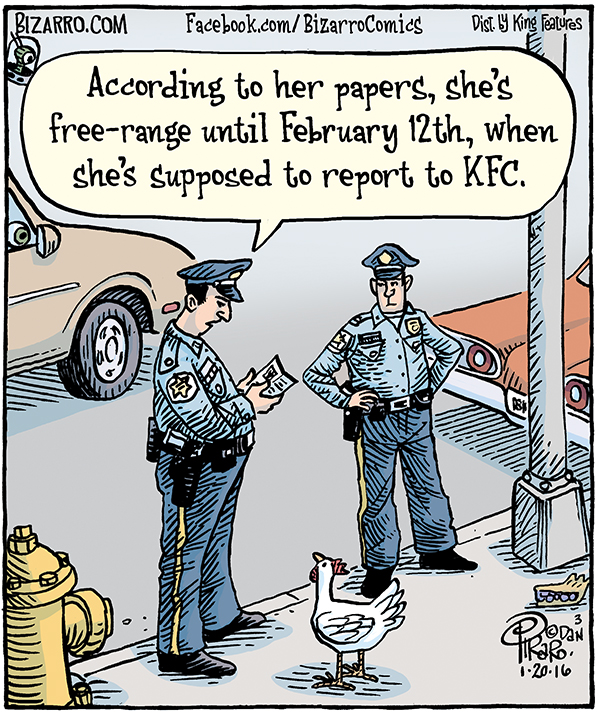 And here’s another cop cartoon, for some reason. I think it would be great if free-range chickens were actually free to wander around my local community but I don’t expect it to happen in my lifetime. One place they actually do this, however, is Kauai, which is one of the Hawaiian Islands. Seeing them wandering around everywhere there reminds one that there was a time when chickens were wild birds. I believe they were called Junglefowl, and still are in Southeast Asia. In my opinion, the male ones are among the most beautiful birds in the world, as this page of Junglefowl pictures shows. 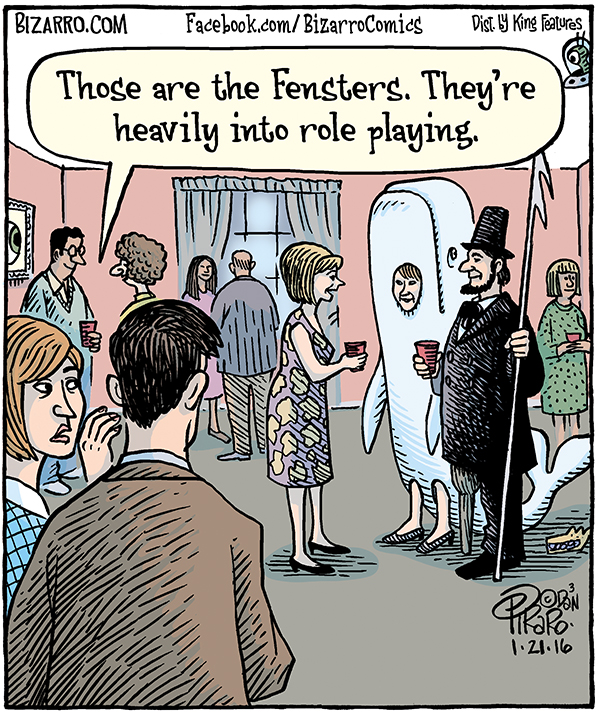 I have no idea what creepy corner of my mind this cartoon about “role playing” came from. It seems vaguely sexy but in a ridiculous, completely UNsexy way, so I suppose that’s why I thought it was funny. I’ve personally never been interested in this level of role playing in the bedroom because I have the sort of mind that always goes for the comedy and that’s usually not very conducive to sexy time. 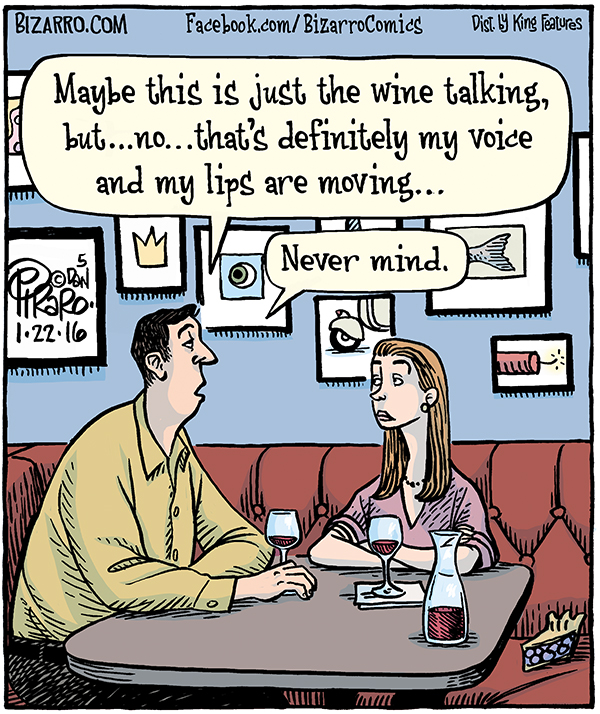 I’ve seen a few cartoons based on the this may be the wine talking cliche but I’ve not seen this take on it so I drew it. Most cartoonists I know enjoy jumping in on a common cartoon theme as a way of competing in a friendly way. It’s sort of a way of saying to your colleagues, I enjoyed your take on the desert island, here’s what I can do. 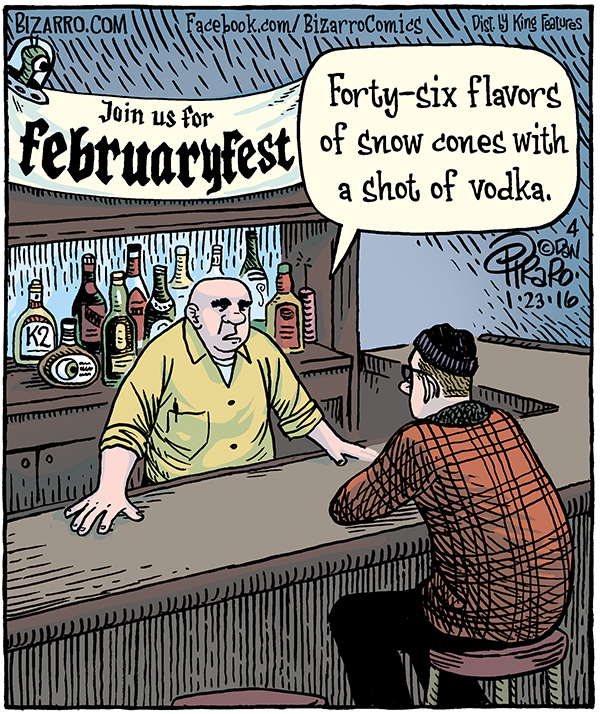 So I was thinking about Octoberfest one day and then, because I have to write at least one joke every single day as part of my job, I thought about alternative month’s fests. February came to mind and then I asked myself what Februaryfest would feature––and here we are. Now that you know how I write gags, you can write your own and won’t need me anymore. It’s been nice knowing you.

But for reals, a few days ago on January 21st, Bizarro celebrated its 31st anniversary. WTF?! Actually it was not celebrated because I completely forgot about it and I’m never quite sure what day of the month it is anyway. Last night, however, my beloved Olive Oyl and I were at an event for the legendary cartoonist and all-around excellent human being, Mell Lazarus, and I suddenly realized my anniversary had passed. O2 said we should have gone out to dinner or something and then we remembered that we actually had gone out to dinner that night to a pretty crappy franchise Mexican restaurant because we were hungry, it was there, we’d never been there before and decided to hope for the best. It was very “meh”. As is a 31st anniversary, come to think of it.

Thanks for reading to the end, Jazz Pickles. I hope you all have a grand and groovy week full of life-changing revelations about the nature of our place in the universe. And if you do, please be sure to share.