Ask A Cartoonist: How Complimentary!

The first Sunday page I drew after taking over the artistic chores of Sally Forth from Craig MacIntosh was for March 31, 2013. My primary concern was that nobody notice a stylistic change in the art. When it finally ran, the following comment was posted on Francesco Marciuliano’s Facebook page. Made my day. 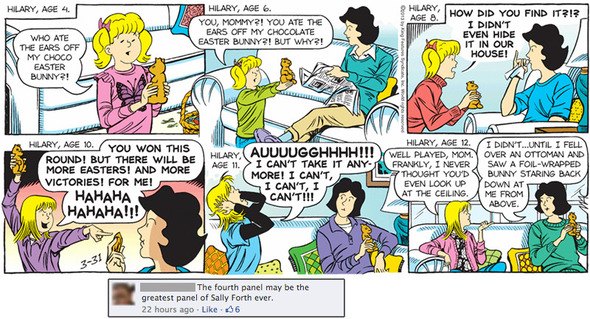 It’s uncanny how many folks tell us, “You must have a camera in my house!” It’s the highest compliment we could receive.

It’s hard to choose a specific example, so I’ll say the greatest compliment I’ve received was the camaraderie that was extended the membership of the National Cartoonists Society when I attended my first Reubens. These people who were my idols made me feel welcome in their ranks.

Here’s an email from two days ago:

Bud, you are one sick, depraved, perverted guy & I love it !

I’ll take that as a compliment.

I tend to receive the same type of compliment over and over…and I never tire of hearing it. It’s basically: “I can relate so well to your comic.” I love it because that was one of the main reasons I decided to write my strip. I wanted to connect with other parents and vice versa. I also get (a LOT): “Do you have cameras hidden in my home?” It takes all my will power not to respond, “yes.” That might give readers the creeps.

Here’s a Classic Ketcham Compliment you can sink your teeth into. 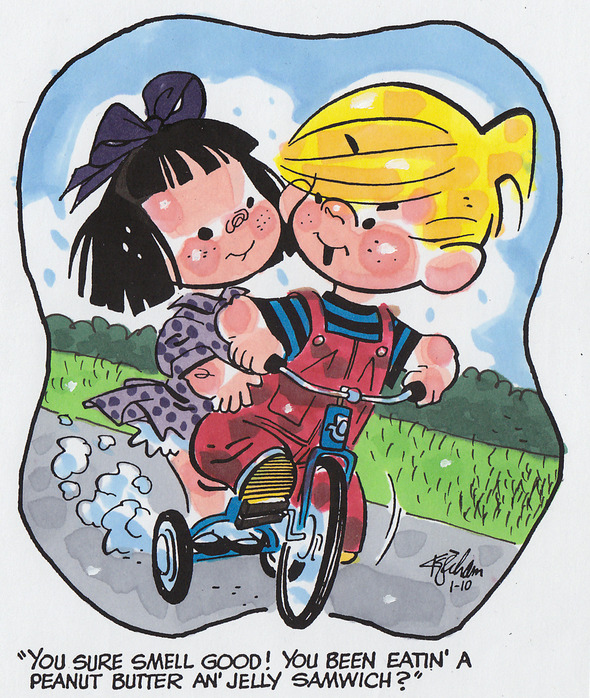 Snuffy’s compliments for anybody are few and far between, but here’s one of my favorite comic strips from last April that shows him giving Loweezy a really sweet compliment!

This gushing email from a reader is right up there on the top ten compliment list — most of it is completely untrue… This strip was part of a two-week series following the Kudlick’s Paris vacation.

Today’s Dustin really caught my eye–and the artwork wouldn’t let it go! It is one of the best comic strips I have ever seen. First the gag–phenomenal! Both funny and true! I was in Paris last year and the fashion sense of the French really puts us Americans to shame!

But the artwork! Wow! There is a wonderful compositional flow from left to right, with the unseen man with a cigarette bringing the viewer’s eye back into frame. The characterizations of every figure in the panel is accurate and wonderful. The not-unfriendly but definitely aloof expressions of the French passers-by and the more vacuous look of the American family on vacation.

But what strikes me most is the attention to detail! Everywhere I looked, I saw corners that could be cut, but none were! The woman-with-a-dog’s hand has all four fingers, with her first finger raised slightly above the rest. The cigarette’s butt end is visible inside the hand of the man with cigarette. Even the lines in Dustin’s telescopic selfie pole! And the background! The wonderfully rendered apartment buildings, the Euro cars, one with a man in it–you can even see he is wearing a European driver’s cap! And yet even with such amazingly intricate detail, the overall artwork is CLEAN with the figures in the foreground standing fully apart from the background!

Well, you asked, so I guess it doesn’t look like blowing my own horn,but the nicest compliment I ever received on my work came just recently from John Benson, legendary comics critic and scholar, regarding my new graphic memoir, “Invisible Ink”. Here it is in part:

As soon as INVISIBLE INK arrived from Amazon I sat down and read it straight
through. It was an exhilarating experience! A few days later I read it again. I haven’t
been so fired up about a book (of any kind) in a long time. The story itself, the
core tale of your mother, is fascinating; you’ve captured a complex personality
in wonderfully human terms. But there’s also all the rest: your research into Lariar’s career, your great-grandfather’s life, the personal reminiscence… everything. Your handling of all this material is breathtaking–a sophisticated and densely-layered weaving together of all the disparate elements. Then there’s the art, a amalgam of classic Griffy style, Lariar-esque cartooning, and especially the evocative fine-line illustration, each mixing seamlessly with the other and with the book’s changing narrative needs. Not to mention your complex variety of narrative techniques: it’s tightly structured but feels open and liberated. It’s all too much! 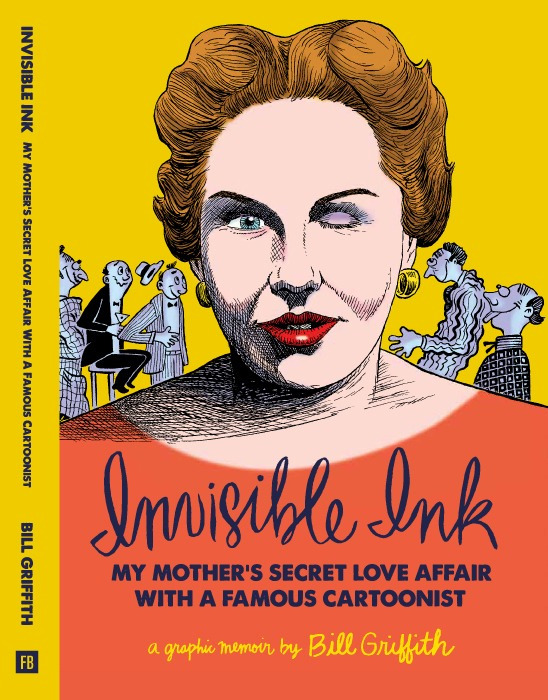