Ask A Cartoonist: In Your Wildest Dreams

I haven’t dreamt about cartoon characters since I worked in an animation studio that produced Honey Nut Cheerio ads.
After working for hours on end, I would see nothing but this when I closed my eyes – pretty scary, right?

Then, on a completely unrelated note, about a week ago, I dreamt that I met the pope. 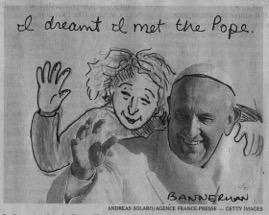 “I don’t have any one particular story, but I can tell you that my dreams are sometimes super strange, and yes — I do sometimes dream that I’m either inking, or trying to apply a wash over a wide area. When I have this type of dream, the paper, or surface that I’m supposed to be drawing on is way too close to my face, or — hard to describe— it’s the actual space around me, covering my whole field of vision. And when I ink a line, it’s not with my hand, or pen, it’s a sort of tracking with my eyes. It doesn’t make a world of sense here, but in my dream world it’s totally normal. In one dream that I had like this, the drawing showed people at a cocktail party. Lots of black figures on a sepia-colored background that needed an ink wash. I woke up before I could apply it.”

Pretty much every character in On the Fastrack has an active dream life…even Lenore the raven!

Snuffy Smith probably spends more than 75% of his time sleeping! I don’t know what he’s dreaming about in this particular strip, but it’s quite possibly turtle soup or maybe even the Teenage Mutant Ninja Turtles!

I had a dream recently where I thought I had a brilliant comic strip idea. It was a cowboy with a really tall hat that was actually a burrito, and the punch line would be– wait for it– “Cowburrito!”
But then I woke up, and it didn’t make any sense.

My dreams are generally the slurry of my brain.

Your request reminded me of a dream that had a profound effect on my career. I was at a cocktail party one night and a group of black servicemembers asked to talk to me. The said, “You have a dishonest comic strip. There are thousands of black soldiers in the US Army and you don’t have ANY in your strip.” I went home that night and realized it was wrong to exclude blacks, but most of the characters in Beetle Bailey were not intended to be good examples. I couldn’t make a black lazy like Beetle or stupid like Zero or a sex fiend like Killer. I couldn’t come up with an acceptable character who would represent black servicemen well but also fit in the strip.

Then, one night in my sleep, I dreamed of an officer with an afro haircut and an upbeat attitude. I woke up and made a sketch and in the morning thought of a name, Lt. Jack Flap. When he appeared in the papers, he was immediately accepted. The comic started selling more in foreign countries with a large black population. Later on, I got a nice letter from President Obama and a great visit with Secretary of State Colin Powell. Dreams do come true. Bye! I’m going to bed to have more.

Since it’s still close to Christmas, here’s a DENNIS dream from a few Christmas Eves ago that was a real EYE-OPENER for him.

I wish I dreamed about the comics. The only dream I remember this week was about an alien invasion and it seemed very real!