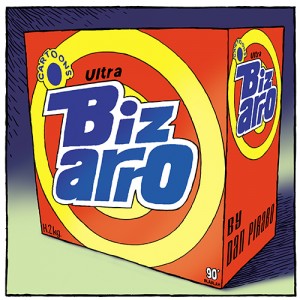 (To achieve enbiggenation of any cartoon, squint your eyes and click it.) 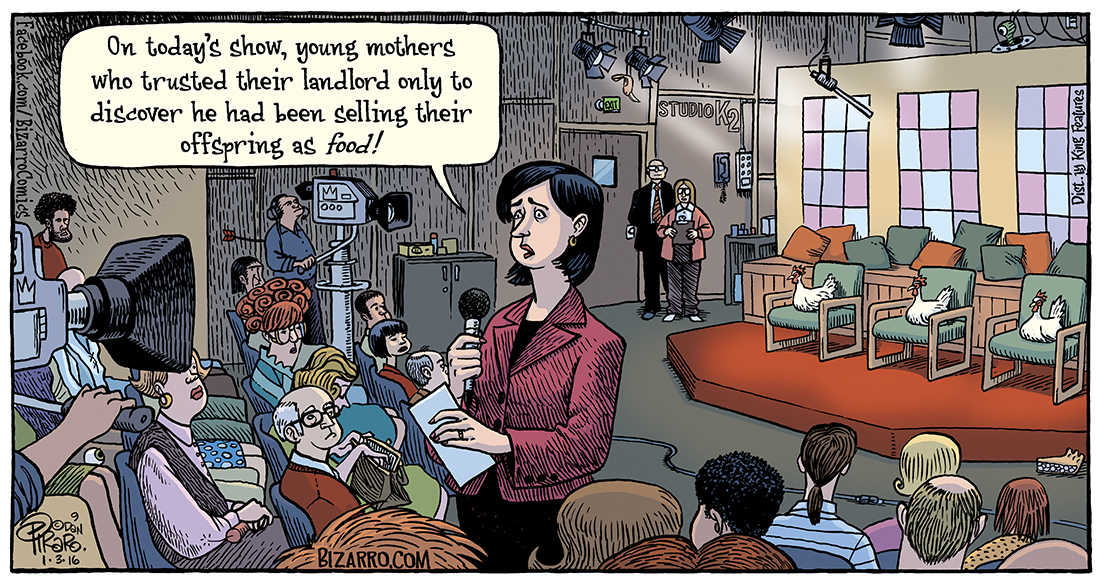 Bizarro is brought to you today by Scary Logic.

I haven’t seen one of these absurd, invented-crises daytime talk shows in years and wasn’t sure they still existed but recently, while watching something sophisticated and intelligent, I happened to see a commercial for The Jerry Springer Show. Apparently, it’s still on the air with recent episode titles like “Played by a Transsexual,” “Wives Battle Mistresses,” “Stripnotized,” “Battle Royal for Cheese,” and “My Father is My Mother.” Only one of those titles is fake, see if you can guess which one. I’ll put the answer at the end of this post. The larger point is that sometimes it scares me to be trapped on the same planet as people who participate in these shows (onscreen or as viewers) and scares me even more that most of them are allowed to vote. I know that makes me sound like an insufferable elitist but I have long condoned requiring people to pass a simple IQ test before being allowed to vote. Nothing complex, maybe just one or two multiple choice questions like––

Complete this sentence: Donald Trump is a…

a) reasonable choice for president

b) carnival barker who embodies the worst of human nature

That’s all there is to it. If you can’t answer that correctly, you likely have trouble differentiating between an “a” and a “b” and, in my (not very) humble opinion, should not participate in the future of our country. 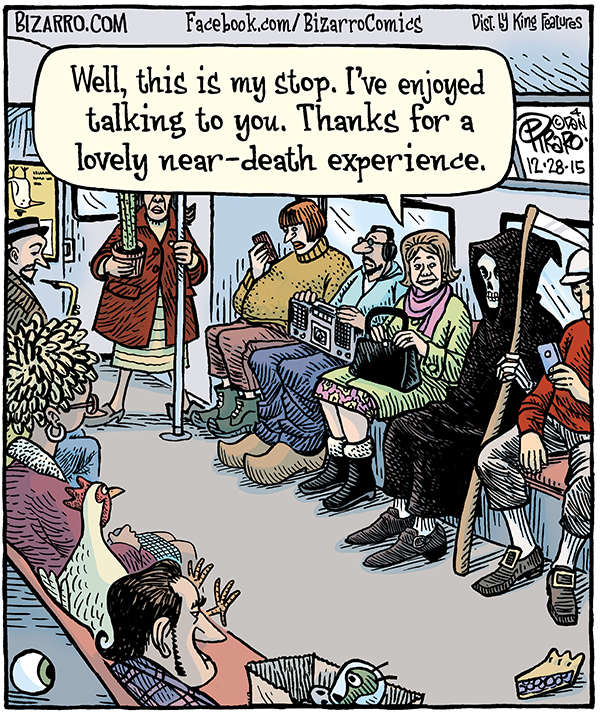 Speaking of being frightened by some of the people you are sharing the planet with, few things will give you that feeling faster than a ride on a New York City subway. I lived there for ten years and have a few stories the retelling of which could send me into a shivering fetal position. These kinds of characters are fun to draw, however. I’ve often said that my favorite time to ride the NY subways is Halloween because it is the only day of the year that it is acceptable to ask a total stranger, “What are you supposed to be?” It’s not the only time you want to ask that, just the only time that it’s safe to do so. 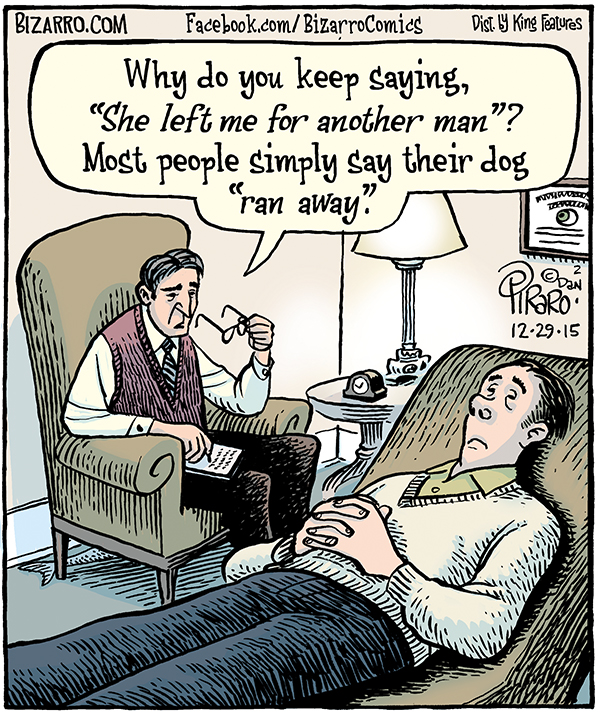 I had two dogs once and when one of them died, the other kept running away. It really broke my heart and eventually led to this cartoon. Not really the same scenario, but a way to get a little humor out of a situation that still makes me sad when I think about it. I presume she was looking for her missing friend because eventually she settled down and lived happily ever after. 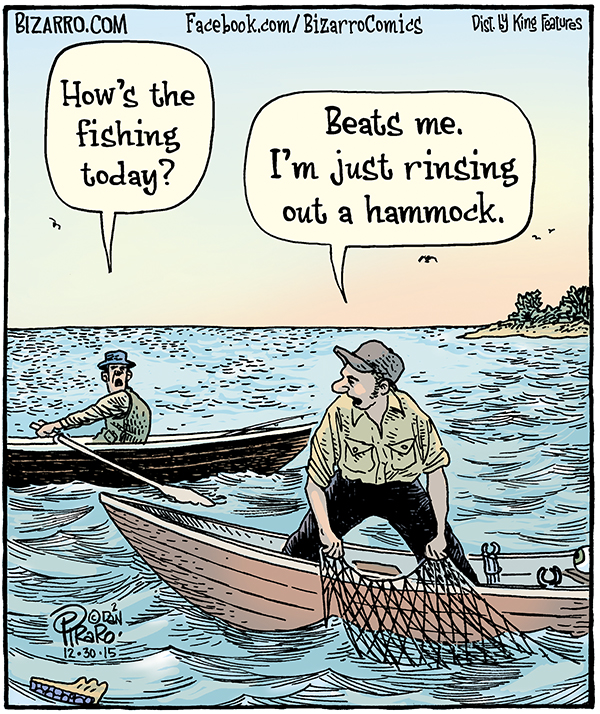 My favorite kinds of cartoons are ones that look like one thing but turn out to be something else. This is one of those and it tickles me. But also, what happened to this hammock that it needed to be rinsed out? 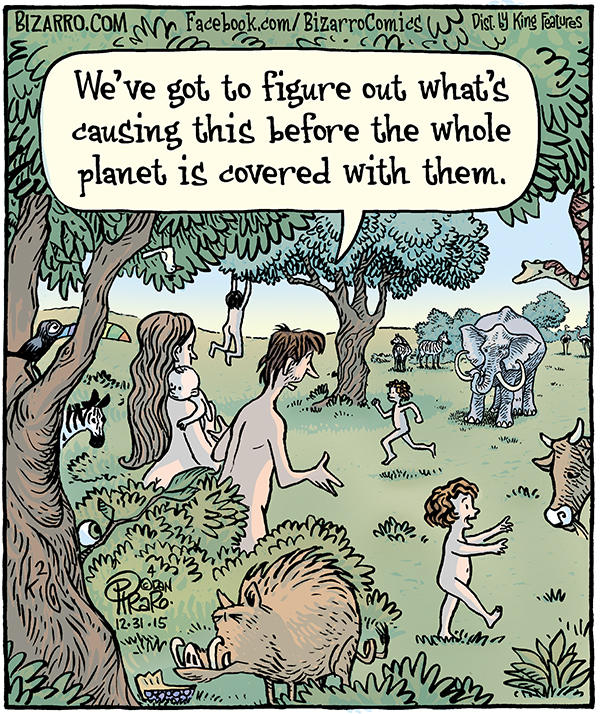 Here’s a scene from the Garden of Eden that is missing from the book of Genesis. But it most certainly happened, as evidenced by the 7.3 billion humans (at this writing) doing their damndest to make the Earth uninhabitable by our species. Or at least extremely uncomfortable. If you like to be scared, have a look at this world population clock. This link is not for the faint of heart. 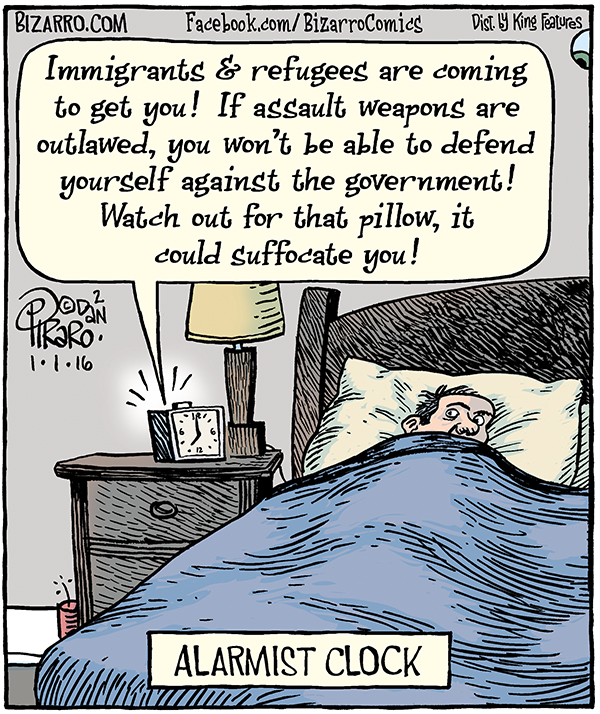 I got a bit of hate mail about this alarm clock cartoon. Here it is in its unedited entirety:

“Idiot, liberal comic over exaggerates and misrepresents others opinions for comic strip!”

I assume that since this reader was offended by this cartoon, he considers himself to be an alarmist; if you’re not who the cartoon is talking about, why get offended? I also would like to point out that my comments about a few of the cartoons above qualify me as an alarmist, as well. I’m just alarmed about different things.

One thing I’m not the least bit alarmed about is terrorism. A quick perusal of articles like those on this page will tell you that the statistical odds of being harmed by a terrorist are lower than the threat that your own household furniture poses. Fear is the actual weapon here, far more than violence.  Terrorists, politicians, and the media know this. Many politicians (other than Obama, who has actually been criticized by media and other politicians alike for not playing the fear card enough) exaggerate the threat of terrorism in the U.S. because fear motivates voters. The media does it because fear heightens ratings. Fox News Channel has consistently used fear (terrorists, homosexuals, immigrants, refugees, socialism, pedophiles, etc.) to drive ratings for years.

Terrorists also know that far easier than sneaking terrorists into the U.S., they can use racism to recruit Muslims already living in the U.S.  If they can get enough “leaders” to condemn American Muslims and fuel fear, they can get average Americans to despise and mistreat Muslims living legally in the U.S.  If a large part of society mistreats an entire people long enough, a few of them are going to turn against society. Poof! You’ve created a “self-radicalized” Muslim. Well done, Fox News Channel and virtually every Republican candidate for president.

Sorry for the soap box speech. I’m an alarmist when it comes to institutional idiocy. 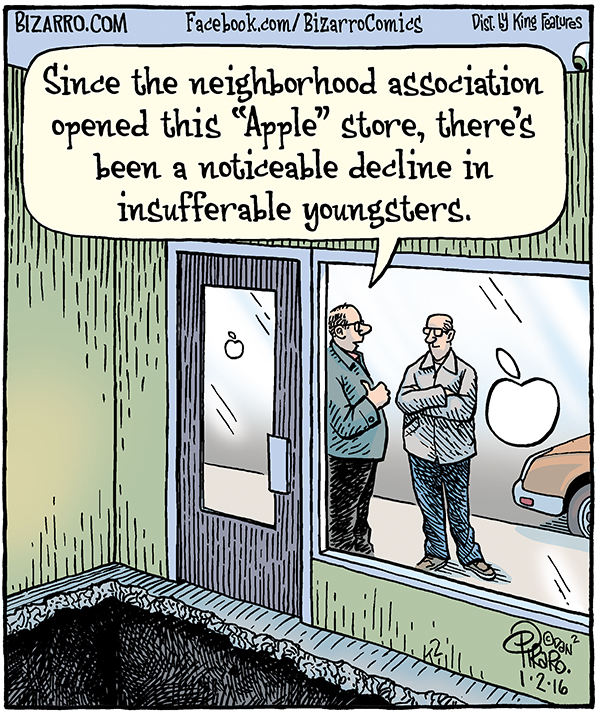 As a person over 50, I admit that I often scoff at people who are addicted to electronics. The most obvious example are those who are willing to sleep on a sidewalk overnight to be among the first to buy a new version of a device. I’m a big fan of Apple and have used Macs exclusively for years, but I find that their products work just as well a month after they are released as they do the day of. So here’s a cartoon for readers of “a certain age”.

Hope you enjoyed this week’s comics and were able to tolerate my political rants. I always get a few complaints when I get political and try to mostly stay away from the subject, but sometimes I can’t resist. I know I have some readers who identify with the Republican Party and that’s great. I’ve no wish to disenfranchise you. It is my opinion, however, that not many serious conservatives identify with Donald Trump, so he seems fair game.

BTW: The phony episode title from the first paragraph is “My Father is My Mother”.