Ask the Archivist: CHRISTMAS PAST

Today we bring you a bit of Yuletide celebrating, with a serious and an unserious look at  Christmas from the pens of some KFS greats.

First, a beautiful series by Hal Foster, a shorthand telling of Joseph and Mary’s momentous journey to Bethlehem and the birth of Jesus. Foster was a devoted Christian himself, and undertook this unusual series in 1948.

Promo for the 1948 Christmas Story special.

I say it’s unusual because for many years, syndicates would provide short-run special Christmas series, almost always something on the lines of children or animated toys that have to assist old Saint Nick in performing his annual rounds. This Foster series is an uncommonly sober offering, and in large-panel format rather than the regular strips. It came in six installments, intended to run from Monday the twentieth of December to Saturday, which would be Christmas Day. But a lot of papers would take the day off, and so might run them a bit earlier to insure they’d play out before the twenty-fifth. 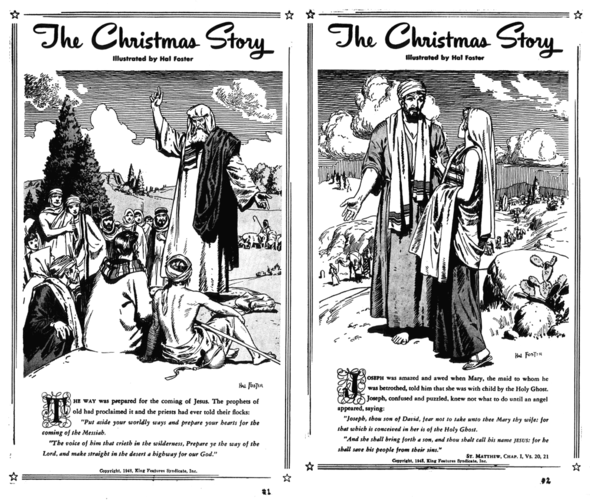 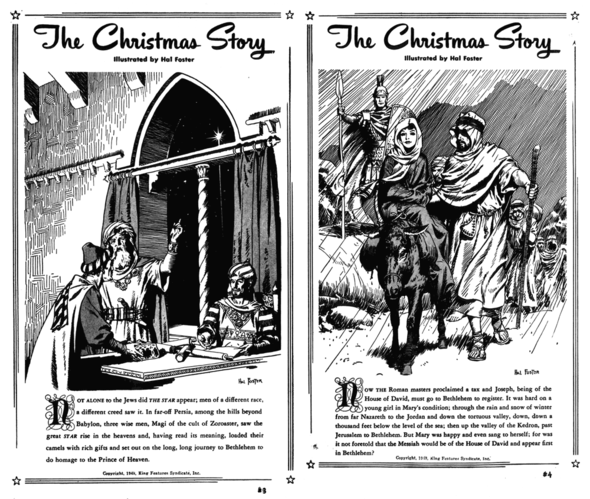 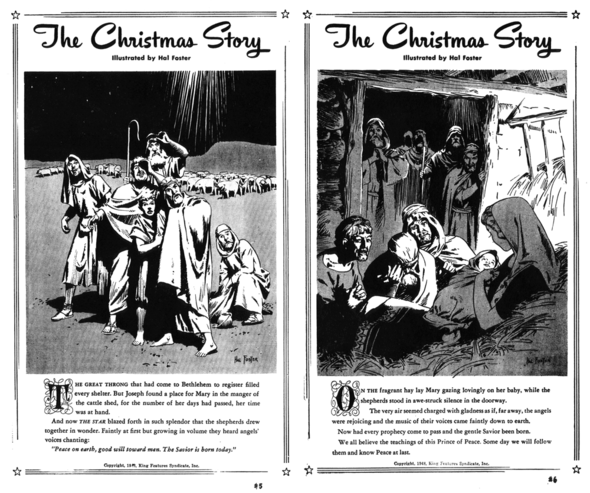 Our regular reader and Archivist fan Timothy Fisher wondered what we might dust off for Christmas in the way of dusty offerings, so I hope you will be pleased as I present our premiere line-up as it was 95 years ago. 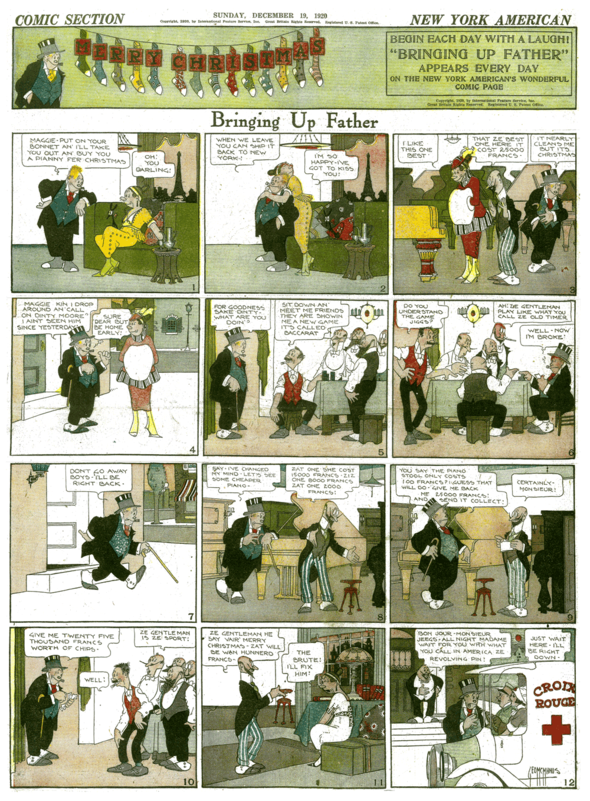 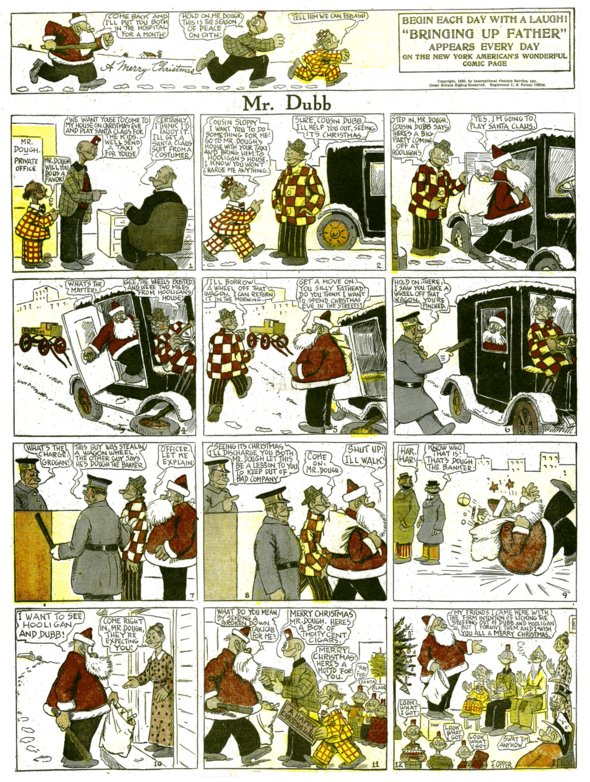 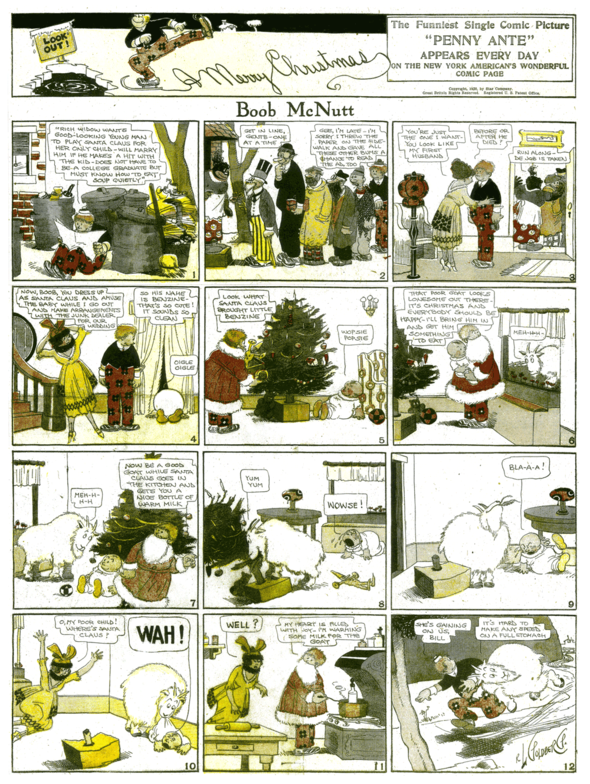 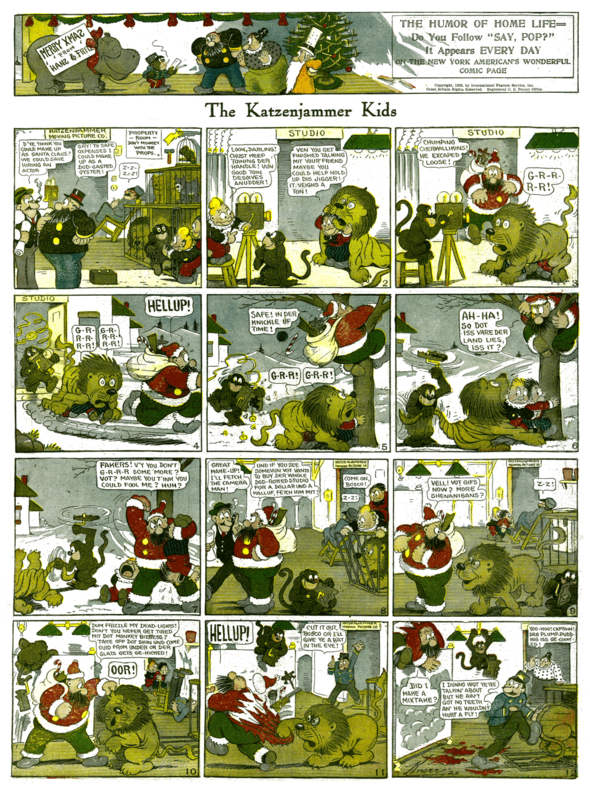 And last, but not least, on to the Mail Bag:

Glad you appreciate Christmas — you must admit I covered all bases this week.  I don’t know who did the first limited-run Christmas series. Perhaps it was the King Features titles drawn by Royal King Cole (1907-93), that ran annually from 1935 to 1940, the last one with the over-licensed Dionne Quintuplets as stars. Later, for many years, we had holiday three-week wonders (usually daily, but sometimes Sundays) supplied by the Walt Disney company, with their characters in the lead. One year it was Winnie The Pooh, another it could be Uncle Remus or Mr. Toad, others could have combinations of disparate Disneylanders like Gepetto and  Peter Pan or Ludwig VonDrake and Sleeping Beauty. These went out of style, I guess, in the 1980s, with a few more tried in the 1990s but probably mainly for international use. The last one was 1997’s Ariel.

NEA had many interesting Christmas series over the years, too, but they, too, now are only of years past.

Post cards were quite a phenomenon a hundred-plus years ago. The newness of it inspired vast amounts of creativity and experimentation. You can find pictures of just about anything on early post cards. You can find them commemorating everything from the Kokomo fishing contest to the anniversary of Franz Joseph’s coronation. There are clubs and organization cards from friendly girl guide salutations to Masonic obscura. There are “mechanical” cards that make an image change with a lever pull; there are trick cards made of tin or leather;  there are cards that can have glitter, buttons, wire, even coins glued to them. There are risqué images that one wouldn’t believe could go through the post in the hand-cancelled days. Actually, a great deal about the mindset and culture of our great grandfathers’ world can be derived from such petty sources as post cards and comic strips. That’s why they’re fascinating hobbies for those who indulge in history.

We wish you all a warm and hearty Christmas to you and your families.