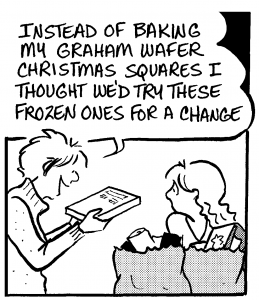 No, no, no, no, NO. You can’t replace traditional homemade with frozen at Christmas. The Graham Wafer Squares I was thinking about when I wrote this week’s series don’t have an official name. They’re just “those squares with the graham wafers and the marachino cherries”. They’re my favourite…although I’ve never made them even once in all my life. My mom does that. It wouldn’t be the same if I made them.  So I thought I’d give you the recipe that’s behind Susan’s Graham Wafer Squares…

-Pour over graham wafers in pan and then cover mixture with more graham wafers. (now you’re getting why I’m calling them Graham Wafer Squares)

-Spread white icing over the top. I asked my mom what kind of icing…I only ever buy pre-made…she said the kind you make from icing sugar. But make it thin enough to be spreadable over the wafers.

-Melt a square of semi-sweetened chocolate. Dribble it over the white icing and use a fork to swirl that into a pattern

-Put it in the fridge to set.