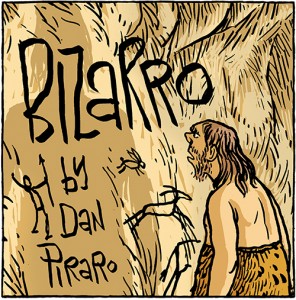 (If it is embiggenation that you seek, click any man-made object in any cartoon.) 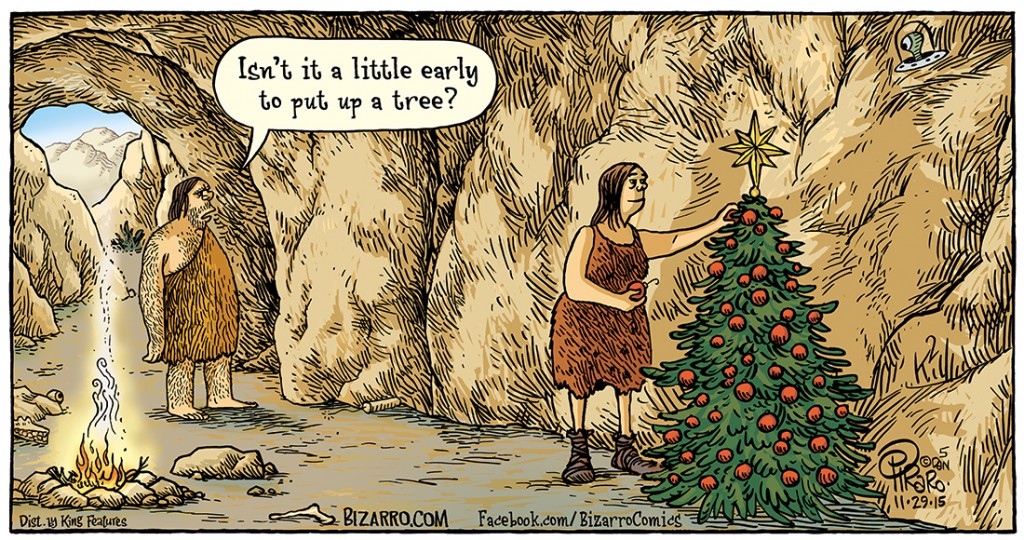 Bizarro is brought to you today by A Favorite Holiday Bizarro Cartoon.

In the interest of full disclosure, I’m not a person who enjoys what we Americans call “the holiday season”. I like Halloween but as soon as it is over the streets, shops, and homes of our communities are filled with songs and decorations that remind one at a glance of why suicide statistics shoot up at this time of year. I’ve known and lived with people who, like the woman in my cartoon above, cannot wait until the next opportunity to decorate their home like the set of an episode of Martha Stewart, and would likely have found a way to do so even tens of thousands of years before the holiday was even invented. I don’t mean to criticize those people; I don’t hate you, I just hate some of the things you love. There’s a big difference.

Still, where there’s pain there’s comedy so I’ve come up with lots of fun holiday cartoons over the years. I’ll be sharing them here on my blog under various blue links for the rest of the month. Regardless of which side of the fence you’re on, I hope you get a chuckle or two. Here’s one that can apply to Thanksgiving as well as Xmas.

(On a side note, this cartoon also brings to mind the classic cartoon strip, “B.C.” by Johnny Hart. Hart was one of the best gag writers of all time IMHO, but late in his life he became a “born again Christian”, as I understand it, and he began introducing blatantly Christian-themed jokes into his work. This made the strip doubly funny because of what “B.C.” stands for. I’m sure Sarah Palin and her ilk see no problem with Christian cavemen, but some of us couldn’t help but notice. I’m guessing Ben Carson’s version of history probably accommodates the concept, too.)

And now for the rundown of last week’s cartoons: 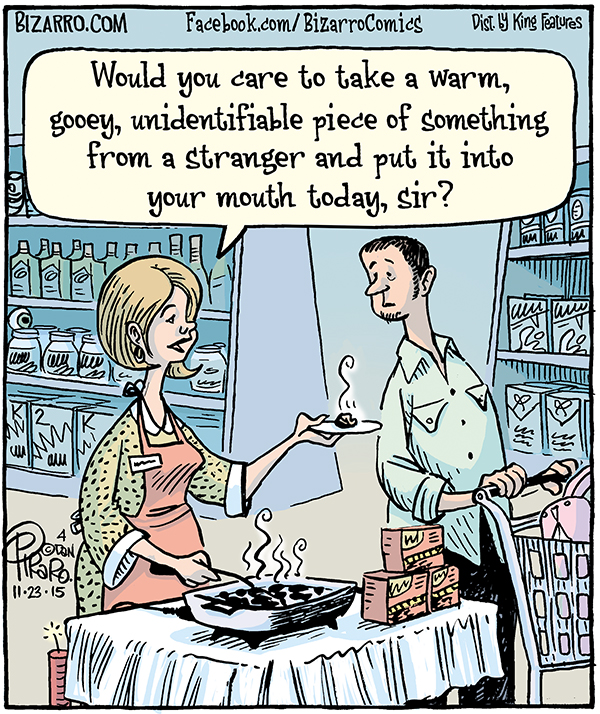 Have you ever asked yourself why you accept food from a complete stranger at the market when you would never consider doing so anywhere else on the planet? I have. 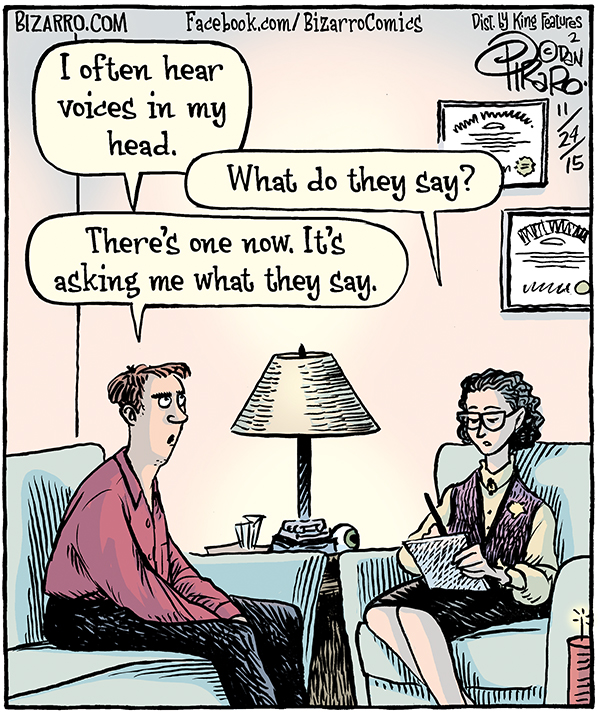 Have you ever asked yourself how you can be sure that the voices you’re hearing that appear to be coming from the people around you aren’t actually originating from inside your head? Perhaps everything you experience is only taking place in your head and everything you consider “reality” is only an illusion. Many people have questioned this concept––two of the most famous examples would be Plato and The Matrix. 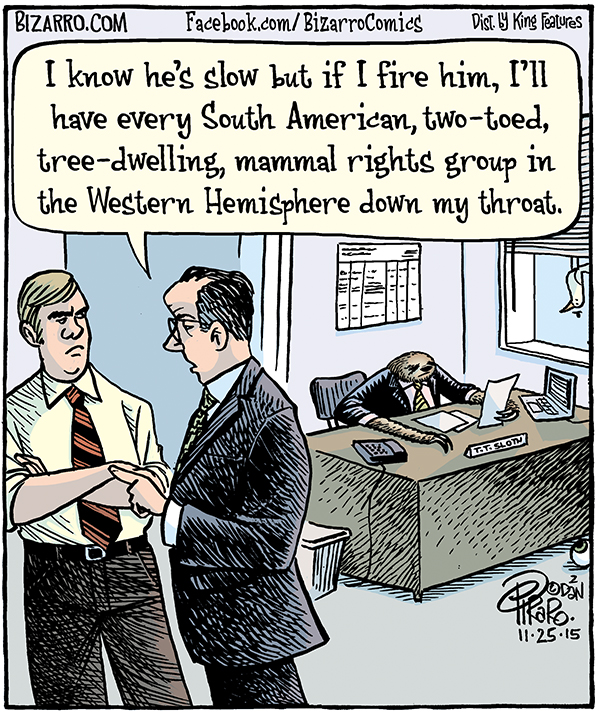 What’s the deal with how slow sloths are? I’ve seen these guys in person and no matter how frightened or threatened they are, they have absolutely no second gear to use in their escape.  The only reason I can imagine that they have survived to the modern day is that they must taste terrible. 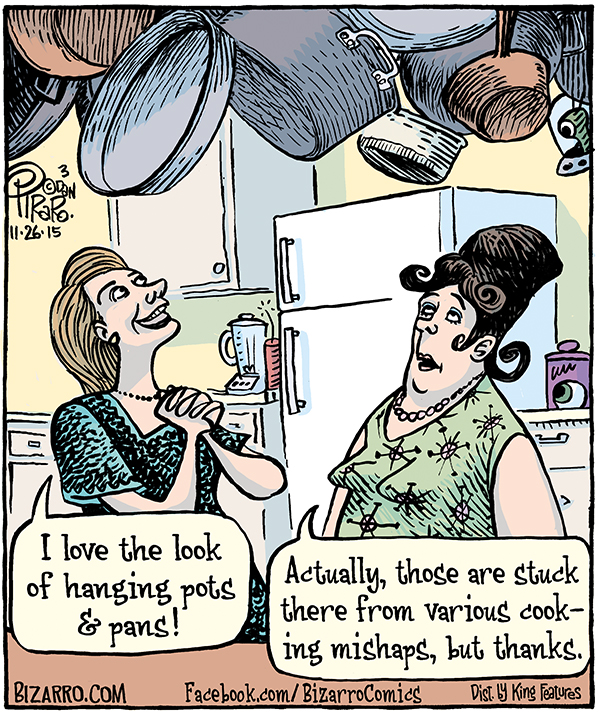 This is as close to a Thanksgiving Day gag as I could come this year. I’ve done a lot of turkey-related cartoons in the past but I was not inspired to go there again this year. Here’s one you may find amusing. 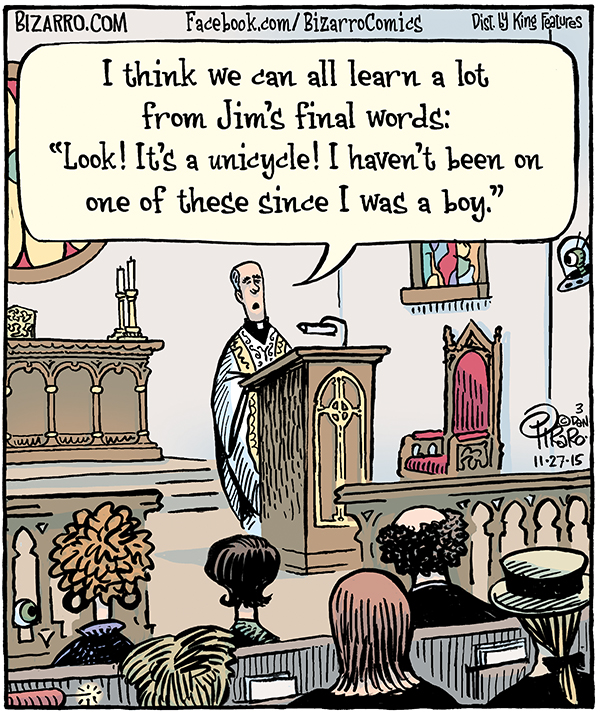 We’ve all lost (or will lose) loved ones and virtually nothing sucks as much as that, but a tried and true way humans have dealt with the misery of this kind of grief is through dark humor. In that spirit, I love this cartoon. It was sort of inspired by a joke I heard back in Oklahoma, where I grew up: What were the last words of the redneck? “Watch this!” 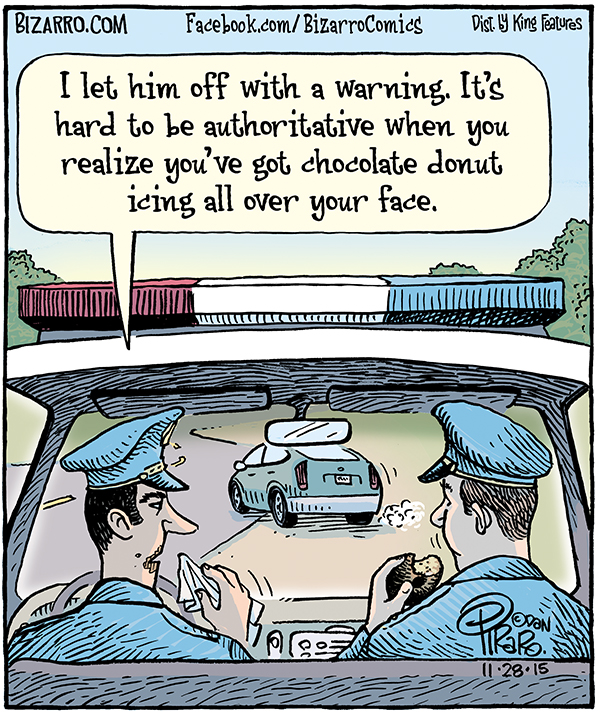 And we finish the cavalcade of laughs with a cop/donut gag. Not my best cartoon ever, but whatever. Hope you Jazz Pickles have a dandy week. Come back and have a peek next Sunday when I’ll be posting the weekly roundup again and adding some of my favorite holiday cartoons from the past.