News Around the Kingdom: Thanksgiving Wrap-Up!

We hope your Thanksgiving was peaceful and satisfying!

John Rose (“Barney Google & Snuffy Smith”) is grateful for his readers, and shares his comic strips from past Thankgivings!

After a Snuffy Smith Thanksgiving

Brian Walker (“Hi & Lois”) looks at special Thanksgiving strips in years past including one that paid tribute to 911 rescue workers!

Alex Hallatt (“Arctic Circle”) is thankful for the opportunity to share her strip with comics fans all over the world!

David Reddick (“Intelligent Life'”) made a desktop wallpaper when he was creating “The Trek Life” webcomic for STARTREK.COM, back around 2006. Carl was having a good old-fashioned Klingon Thanksgiving!  And from his Thanksgiving Sketchbook he had some fun re-drawing an old vintage MGM cartoon poster in his own style!

Bill Bettwy (“Take It From the Tinkersons”) hopes everyone had a better time finding something they liked to eat this Thanksgiving than Tillman in this animated short!

Dan Piraro (“Bizarro”) wonders what would unite people of the world.  He knows that dogs are telepathic! 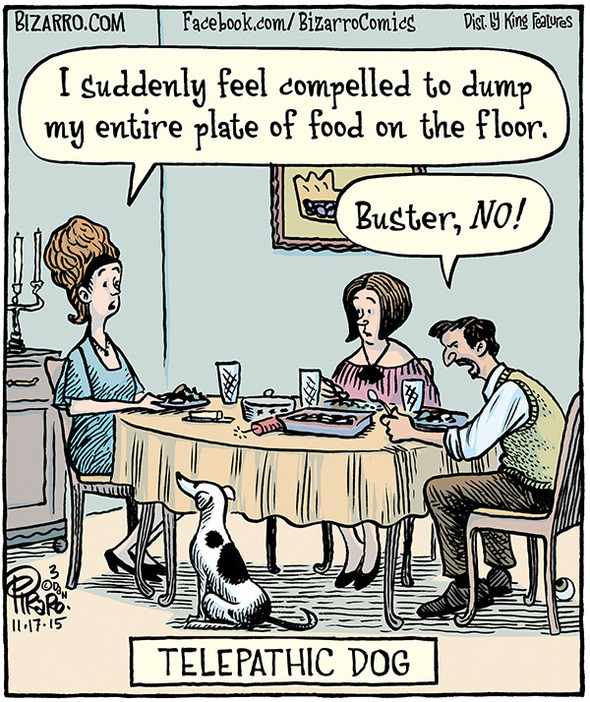 Bill Holbrook (“On the Fastrack”) has a collection of 2012 Fastrack strips called “Dethany’s Raven” that will be available soon!  His other Fastrack and “Safe Havens” books are now available for sale!

David Reddick (“Intelligent Life”) welcomes readers to his “Intelligent Life” store!  Send him suggestions so he can add to it!  Have you seen Skip Skywalker?  David shows us the pencils-to-ink/colors versions!

Rina Piccolo (“Tina’s Groove”) has a two-page cartoon titled “Terms Only Dogs Know” that has been published in “Narrative Magazine”!  Her gag cartoons also appear frequently in Narrative Magazine’s Cartoon Galleries.  Additionally, Rina’s cartoons and comics will appear in a science book published by Springer Publishing coming out this Spring!  Be on the lookout!