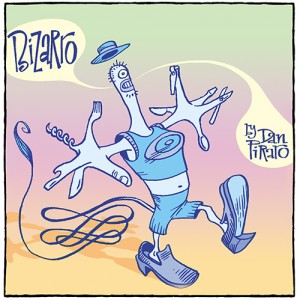 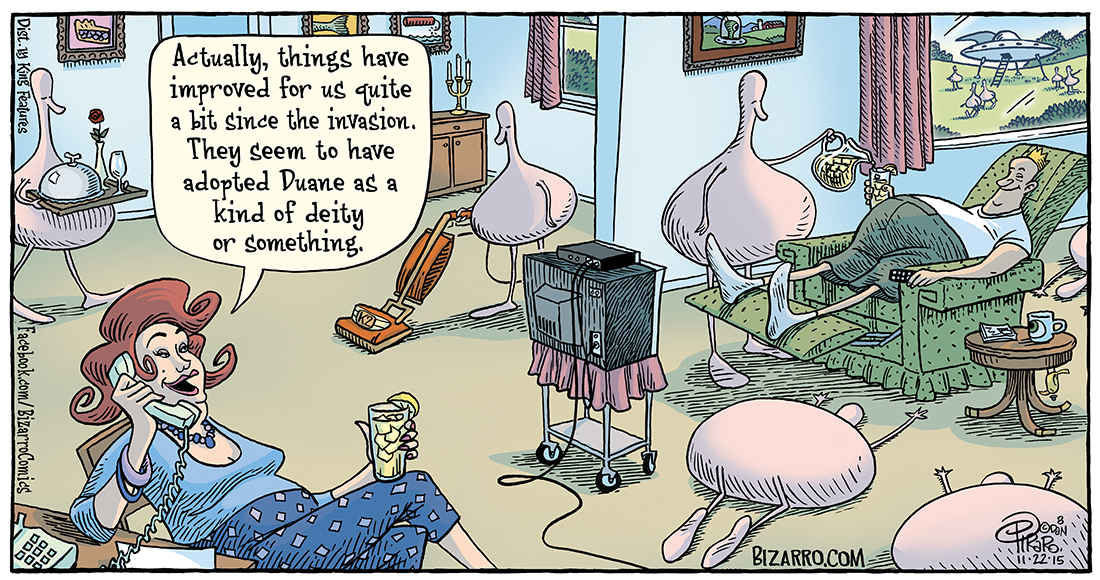 My beloved Olive Oyl and I were discussing the current terrorism/refugee crisis and it occurred to us that what we really need right now is an alien invasion to unite the people of Earth against a common foe. Of course, substituting one set of problems for another isn’t a very good solution, but it would be nice (for once) to see people realizing that there are bigger issues in the universe than whether or not everyone else is praying to the same imaginary magic person in the sky as they are.

It wouldn’t work, of course. Inter-species squabbles would continue because the impulse to believe that ancient mythology is literal truth is somehow programmed into the human brain in a way that dissolves reason and logic in most people.  A recent poll showed that Americans would hypothetically vote for a presidential candidate from pretty much any race, lifestyle, or religion, except for atheists. In a world where religious fundamentalists are destroying everyone’s peace, does it make sense to refuse to allow someone who does not buy into that same shell game to lead us? 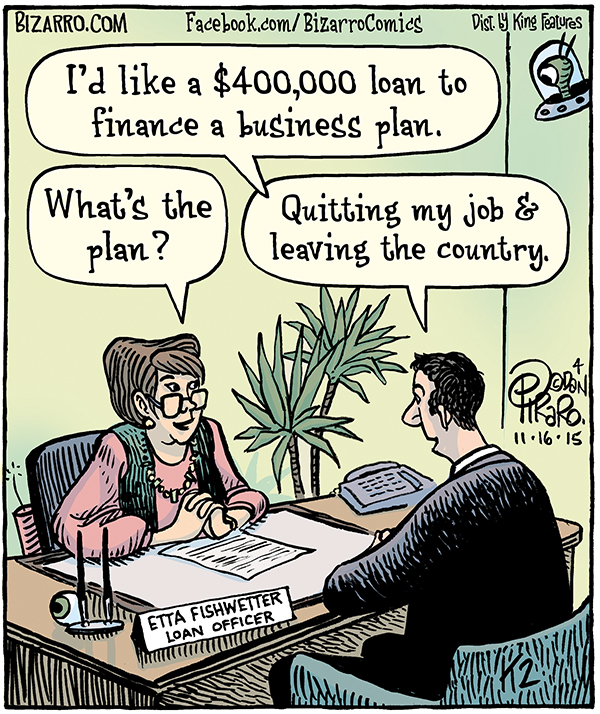 I don’t know exactly what this guy has up his sleeve but I wish my name was “Fishwetter”. 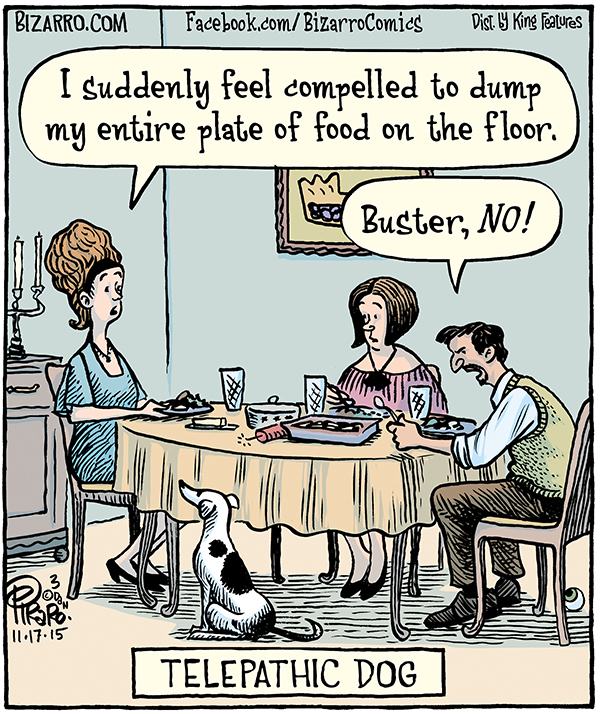 Not all dogs are telepathic but many are. I’ve lived with several. My current canine companion can implant even the most complex ideas into my head, just by staring at me. A couple of days ago I caught myself handing her the keys to my car because she wanted to go to the dog park. That’s all well and good, she’s a pretty good driver, but she had not remembered to bring a couple of poop bags with her and running around like a maniac with strangers always loosens her colon. 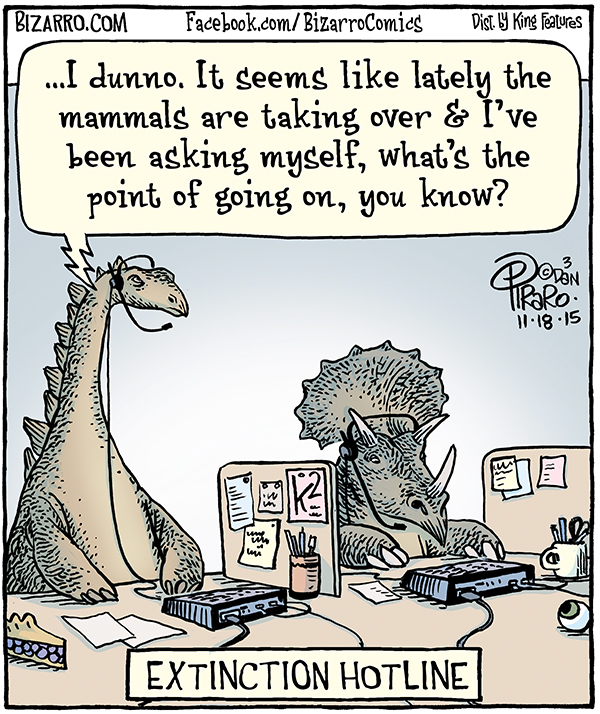 When I look at the damage we relatively small, hairless mammals have caused on this planet I sometimes lament the arrival of the meteor that made it all possible. And now, a mere blink of the evolutionary eye later, we’re on the brink of self extinction. What an odd bunch of monkeys we are. 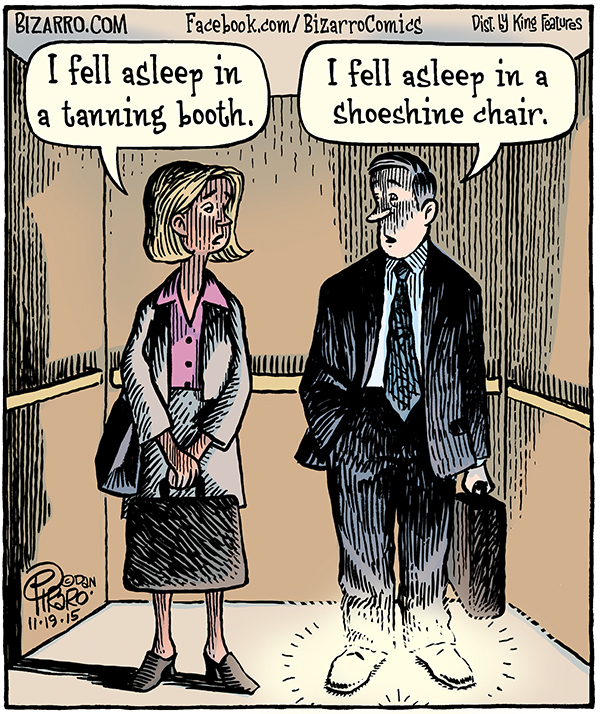 Well, this cartoon is just weird and I don’t know what to say about it. I think I was just riffing on the graphic language of lines and how two characters might have completely different reasons for having vertical lines on their faces. 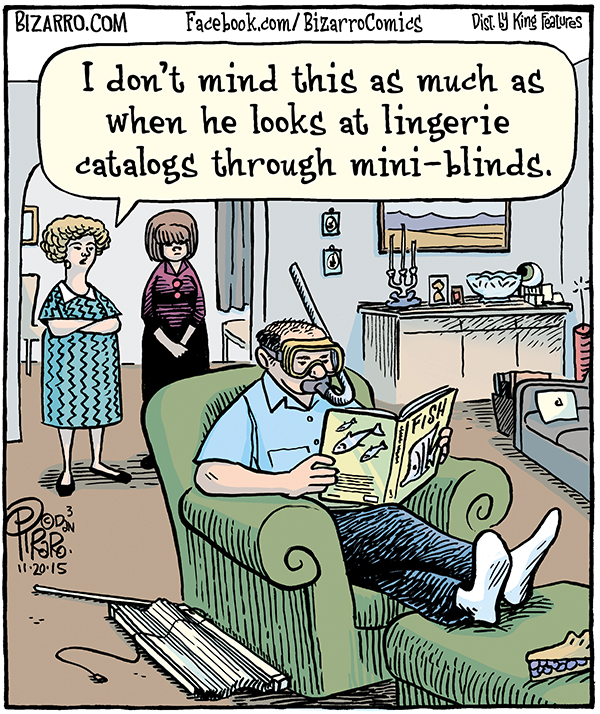 This cartoon is about as sexually racy as syndicated newspaper cartoonists are allowed to get in the U.S.  For the most part, Americans are much more comfortable with violence than they are with sex, which is likely why we have such high rates of both gun-related violence and violence against women. I’ve not done any extensive research into this but I can’t help but feel that our empire-building and puritanical roots have something to do with these anomalies between us and other industrialized nations. 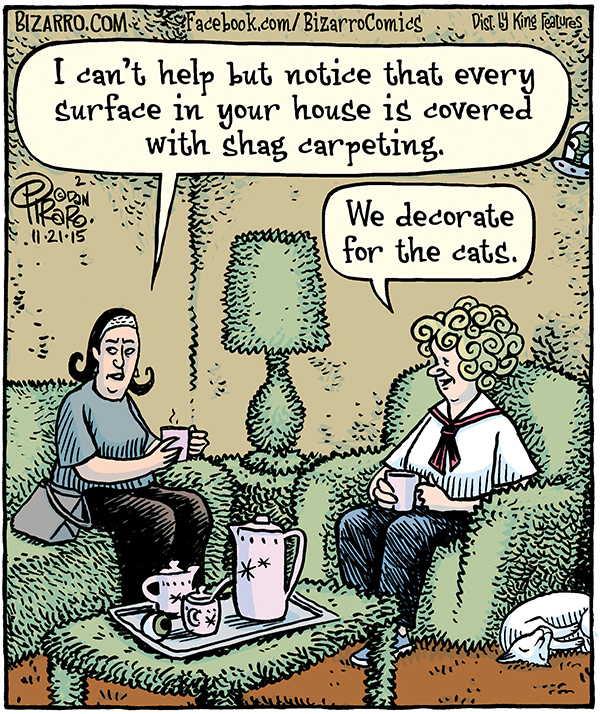 Like most American homes back in the 70s, the one I grew up in had shag carpeting. To this day I cannot understand how people missed the fact that if you wanted to create a way to attract and trap filth of all kinds in your home and be certain your family would come into contact with it on a minute-to-minute basis, you could hardly do better than shag carpet. As though living with it in the house weren’t enough of a health hazard, we teens of the era would take disgusting, discarded shag carpeting from curbsides and trash bins and line our garage walls and ceilings with it to insulate our neighbors from the horrific music our rock bands were making therein. It is a testament to the human immune system that a large portion of the human race did not die of various carpet-borne diseases.