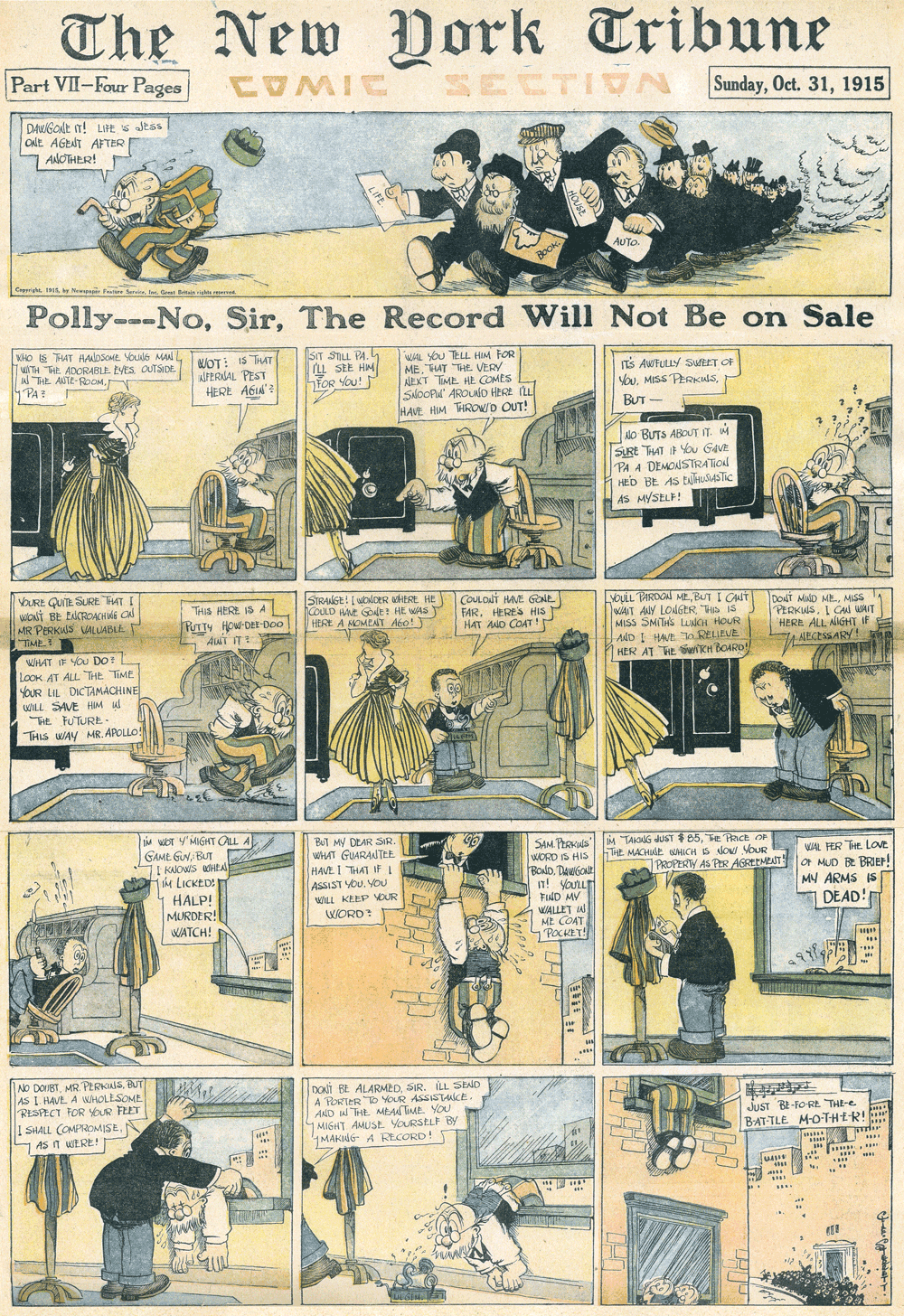 This week marks the centennial of our founding here at King Features. What was happening a hundred years ago? Only a few entries back, we looked at the movie superstar of that year, Charlie Chaplin, and his comic strip alter ego.  But how much more of that long-ago year means much today?  Obviously the founding of King Features is a momentous, relevant event, but there are a few others you could mark as still significant.

In the news in 1915, the biggest story was the World War raging across Europe, where the Germans brought fresh innovations to their schrecklichkeit ethos like poison gas and aerial bombardment of civilians, not to mention atrocities big and small, from sinking the passenger liner RMS Lusitania by submarine, to the death of English Nurse Edith Cavell by firing squad. The Allies began a disastrous nine-month attempt to invade the Dardanelles at Gallipoli, and in a parallel with the present, an Islamic state (Ottoman Turkey) was mass murdering Christians in the infamous Armenian genocide.

Books of 1915: The Metamorphosis by Franz Kafka, Of Human Bondage by W. Somerset Maugham, The 39 Steps by John Buchan and The Sea Hawk by Rafael Sabatini.

Films of 1915: Birth Of a Nation starring Lillian Gish, A Fool There Was starring Theda Bara, The Tramp with Charlie Chaplin, and Regeneration starring Rockcliffe Fellowes.

In Sports, Jess Willard took Jack Johnson for the world’s heavyweight title BS Red Sox pitcher Babe Ruth hit his first MLB home run against the New York Yankees, although he came up short at his one at bat in the World Series that year when the Sox beat the Phillies.  The Cornell Big Reds and PittsburgH Panthers took national football championships, and in hockey, the Stanley Cup was won by the Vancouver Millionaires.

Most of the popular tunes then were very sentimental or  humorous novelty ditties,  some still recognizable now: Auf Wiedersehen by W. Herbert Reynolds, Memories by Gus Kahn, M-O-T-H-E-R by Howard Johnson, Nola by Felix Arndt, and many others.

The Carrier Corporation as well as General Tire, Safeway supermarkets and Maybelline started in 1915.

Today I’m showing the Hearst Sunday comics of 1915, from just about the time the King Features brand was founded.

By 1915, we were the top of the comics world. We had enough material, and more, to fill two comic sections every week. In New York, the parent Hearst papers were the Evening Journal and the morning and Sunday American. Years later, the Journal would have a Saturday comic section, but in 1915, the other section found a home in one of our competitors, the venerable New York Tribune didn’t yet field any Sunday strips in their modest syndication efforts, so they took our secondary lineup for several years. 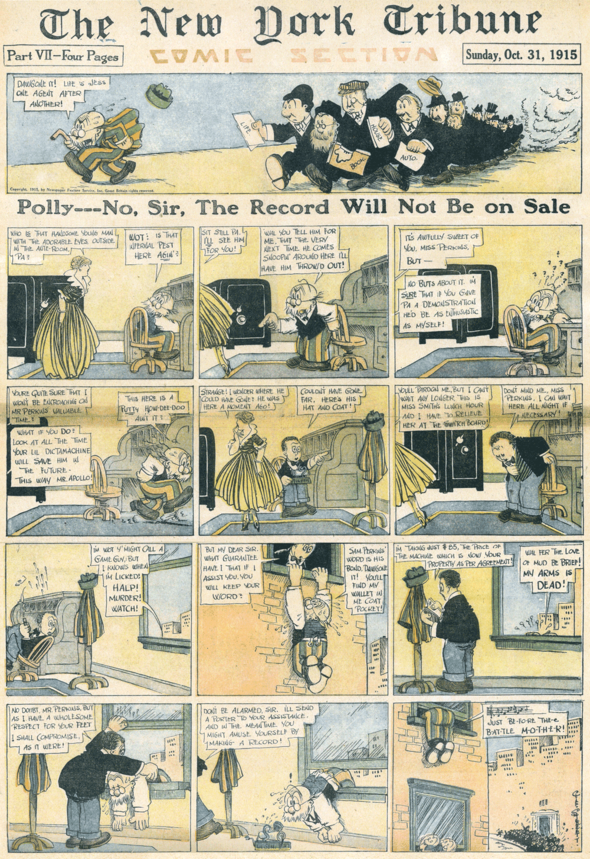 POLLY AND HER PALS by Cliff Sterrett 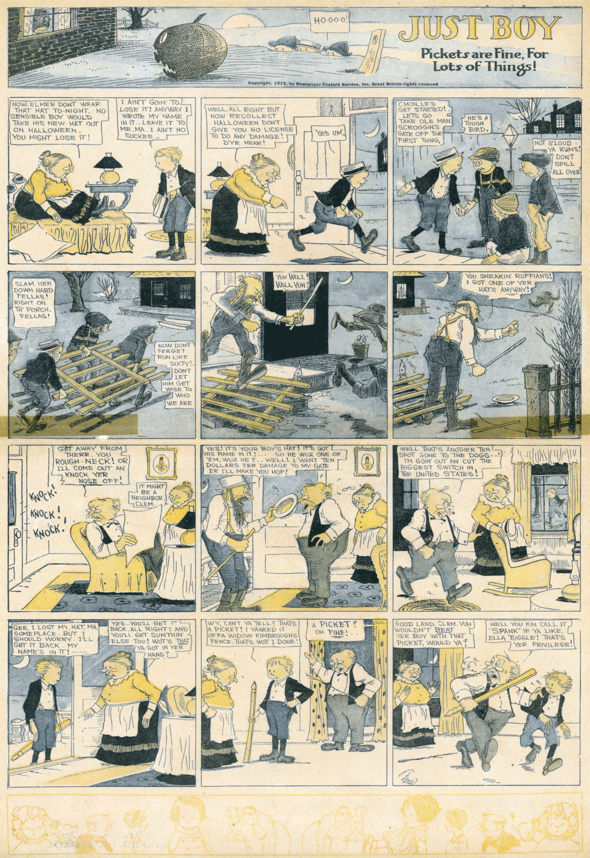 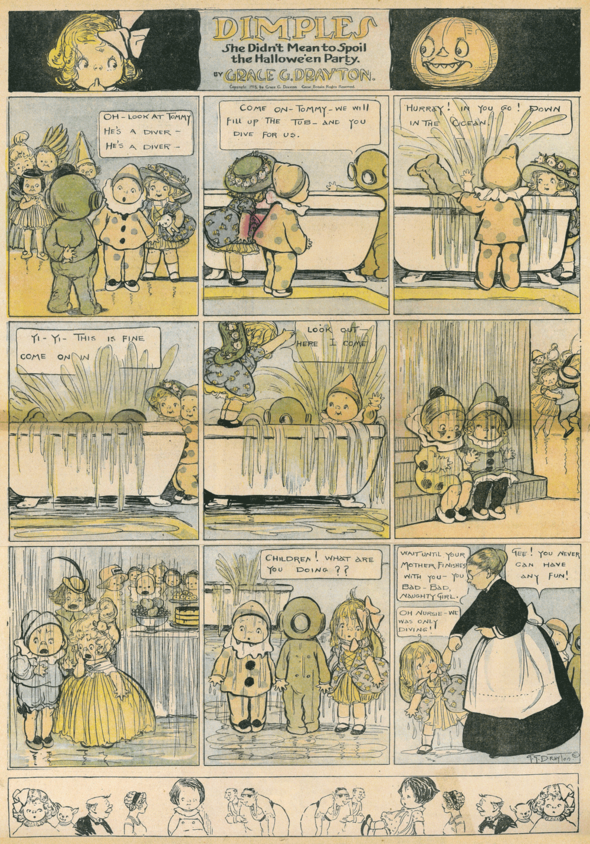 The “First String” section would be found in the Hearst papers, or the leading paper of whatever non-Hearst town the client was in.

THE ORIGINAL KATZENJAMMER KIDS by Harold H. Knerr. The “original” designation is to differentiate between our version and Rudolph Dirk’s independently syndicated one. 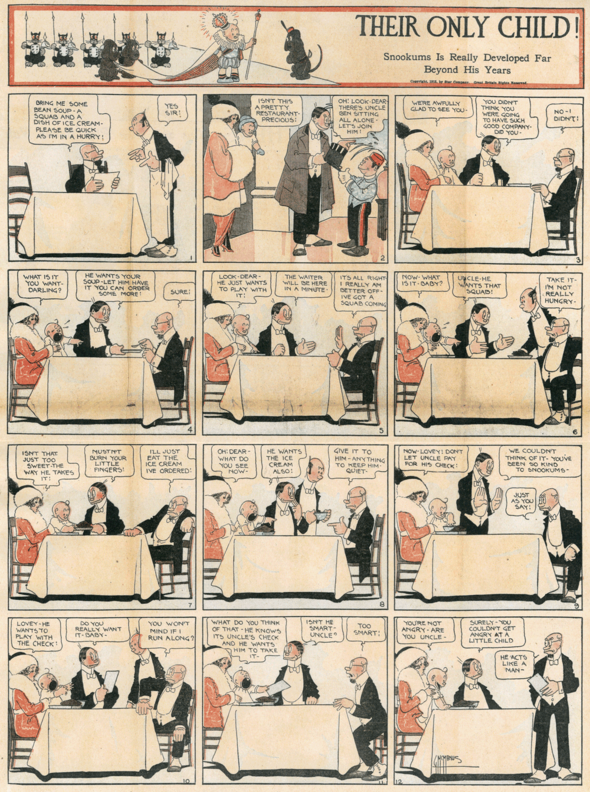 THEIR ONLY CHILD! By George McManus 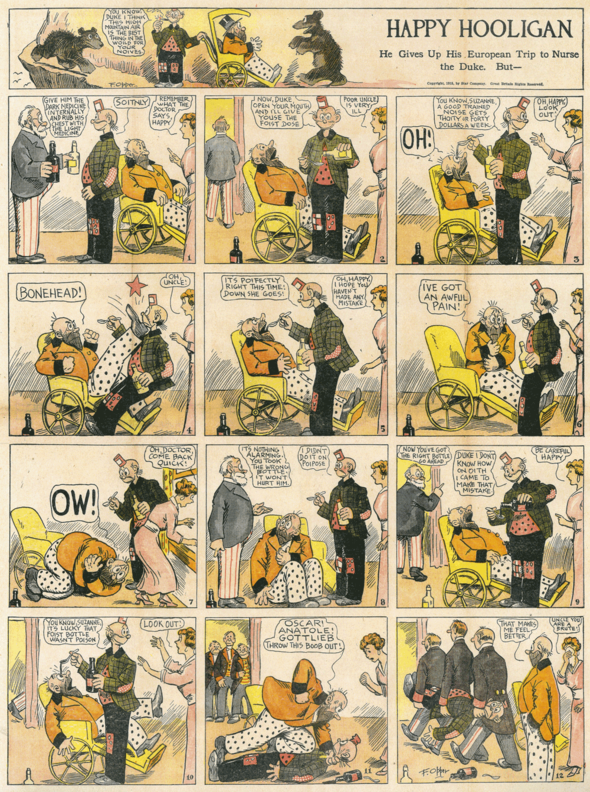 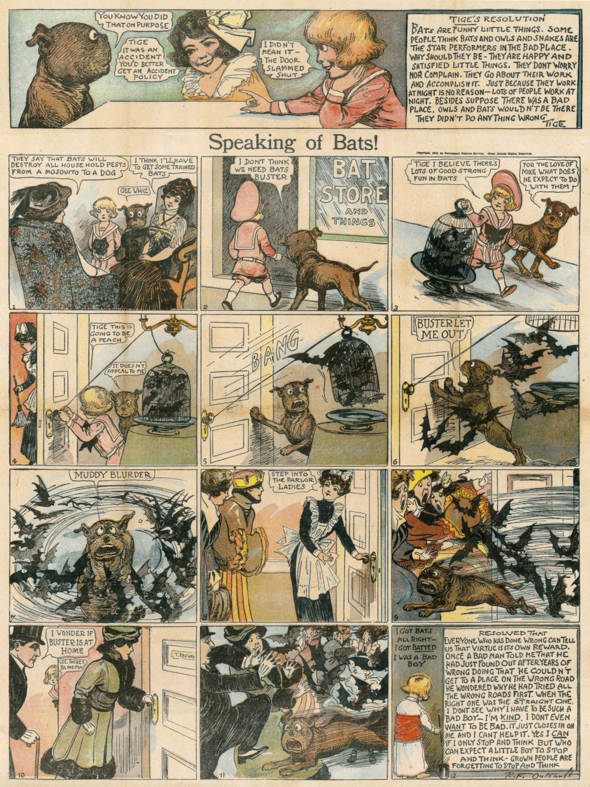 Here’s to the second hundred. Let’s all meet back here for the bicentennial.

Until then, let’s take a look at the mailbag from last week’s post:

TO John W Kennedy, Timothy Fisher-
It’s true that the lives of the WWII generation were different, maybe in some respects better, some worse, but to be sure, they were all more in tune to exactly what freedom means and what was to be taken seriously  or not. It would seem that today, you practically  have to be a combat soldier to be that cognizant.

Perhaps Ookle was a joke that got stale fast, that he stayed too long. Otto Soglow did seem to run out of any good gags for the character long before he disappeared. He was pretty much a figure that could only function in prewar America. If Soglow had created him after December 1941, Ookle would never have seen print.  It would seem unlikely that many European or South American  sales would’ve been made for Little King strips with Ookle in them, those continents containing those who feared or admired the dictators of their era.

If you want to get overly momentous about it, the sling shot attack on Ook’s famous derby more so resembles carriage/automobile assassination scenes like that of Alexander II of Russia, Archduke Ferdinand or maybe the most famous pre-JFK regicide, the filmed assassination of King Alexander I of Yugoslavia and French foreign Minister Louis Barthou in 1934. It was considered one of the greatest newsreel moments, and in 1940, it was still in everyday  consciousness.

Hello Lulu- Haven’t heard from you in a while! The Little King certainly was one the most uniquely rendered strips. Soglow was a real star. I’ll get around to him again next year, I haven’t done anything with his companion strip, Sentinel Louie, yet, so that should be coming up.

Yours until next week. If you want to see a real crock, be sure to ‘toon in…