News Around the Kingdom: Halloween Wrap-Up, Todd the Dinosaur, and Granny Creeps!

Did you see The Rock dressed as Popeye the Sailorman for Halloween?  He rocked!

Vampires then and now in “Hi and Lois”

David Reddick (“Intelligent Life”) received more fantastic Halloween Fan Art!  Check out the fun Witch Hazel he drew from his Halloween Sketchbook!  He also shares a sneak peek at a detailed Gwen in the works, and gives a shout-out to John Rose (“Barney Google & Snuffy Smith”) with his sketch of two Hootin’ Holler characters!

Speaking of John Hambrock…his wife Anne Morse Hambrock, was honored by the Mayor and the City of Kenosha Commission on the Arts last week for bringing the Kenosha Festival of Cartooning to fruition!  It’s an annual gathering of cartoonists and fans in Kenosha, Wisconsin!  Kudos to her for promoting the cartooning arts!

A new “Todd the Dinosaur” website is now up!  Todd is a T-Rex living in suburbia who’s actually a kid at heart!  Check out this charming comic strip by cartoonist Patrick Roberts! 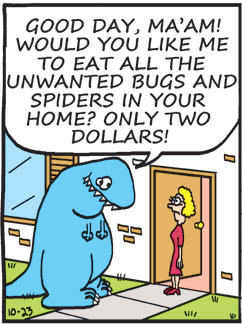 Todd likes to be helpful.

John Rose (“Barney Google & Snuffy Smith”) brings back Granny Creeps to Hootin’ Holler on Sunday November 8th!  Be on the lookout for her! 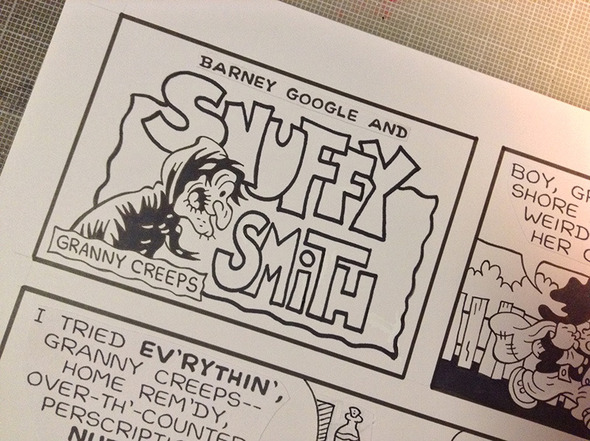 The Entertainment Earth catalog features a Flash Gordon action figure! Get yours now!

The “Mary Worth” crossover with another strip is revealed this week!  Parallel worlds collide!

Mort Walker (“Beetle Bailey”) looks at his strip during the first decade of its existence in the 1950s, and today!  The look may have slightly changed, but the fun remains the same!

Jim Keefe (“Sally Forth”) gives readers a peek behind the drawing curtain with a look at his upcoming Sunday page!

Finally, Dan Piraro (‘Bizarro”) is inspired by a pond in Central Park and breaks down the genius behind his hilarious cartoons for the week!

See you again next Friday!  Have a great week!