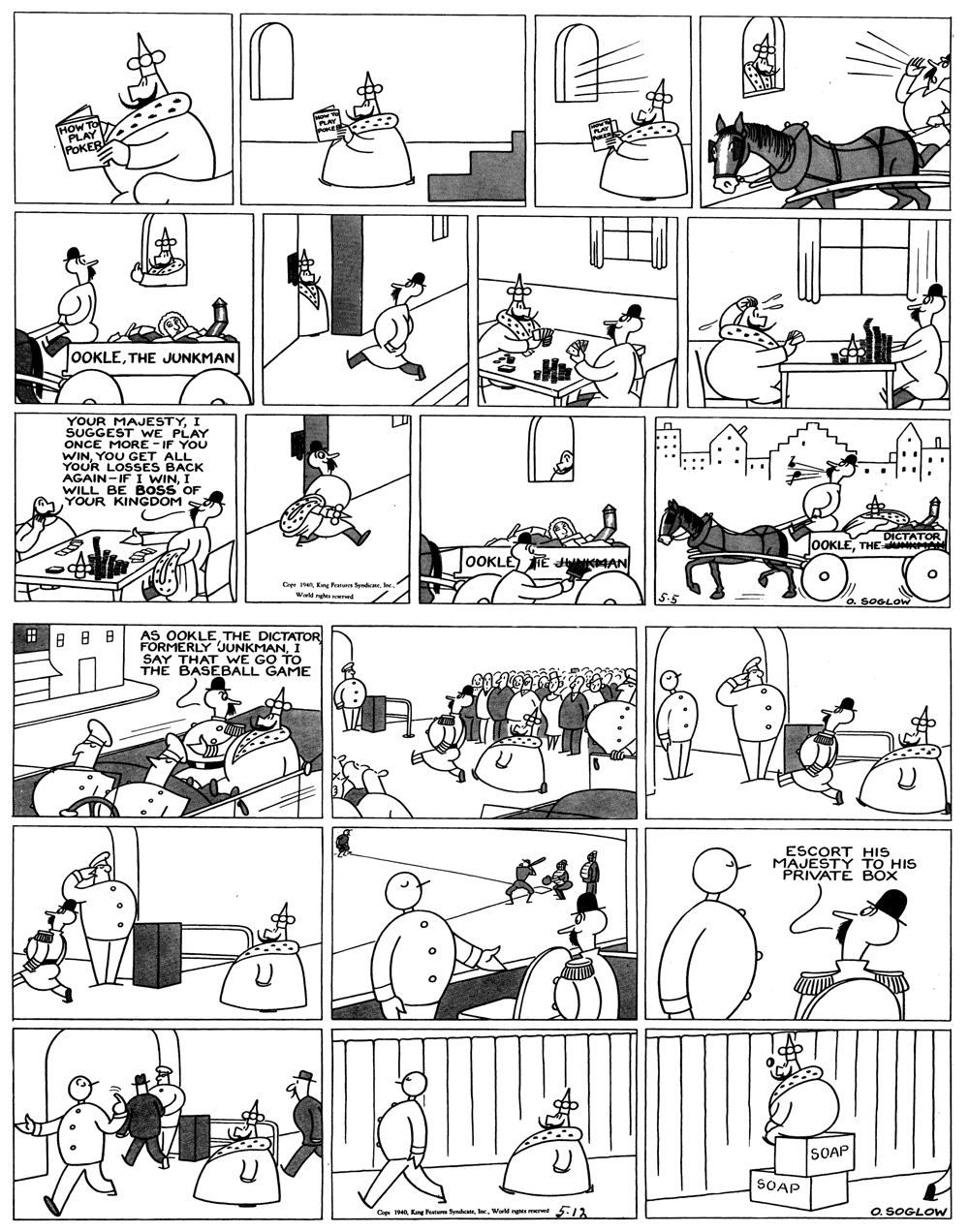 Today’s entry centers on a short-lived character in a favorite old-time strip for many, Otto Soglow’s The Little King, and yes, we’re going back 75 years to World War Two again.

The character is one Ookle, a junk man by trade. In May 1940, the King foolishly lost his kingdom to Ookle in a ridiculously high stakes poker match. Ookle wore a long smock coat and a seemingly out of place derby hat. Upon his big win, his coat became a green military tunic with brass buttons and epaulets, though he still kept the derby, now even more incongruous than ever. As a “Dictator” he somewhat resembles the most famous one of the day, with the pointed nose and the paint brush moustache, though Ookle’s is less carefully trimmed. He even appears to have a goose-step swagger to his walk. The big Ook has a dictator’s temperament, too, ordering the acquiescent monarch around like a slave, with little interest in whether the King is humiliated or put in danger by his demands, always barking out his wishes with the preface, “As Ookle the dictator,  I demand that….”. That’s so we won’t forget who he is, or just to be annoying. 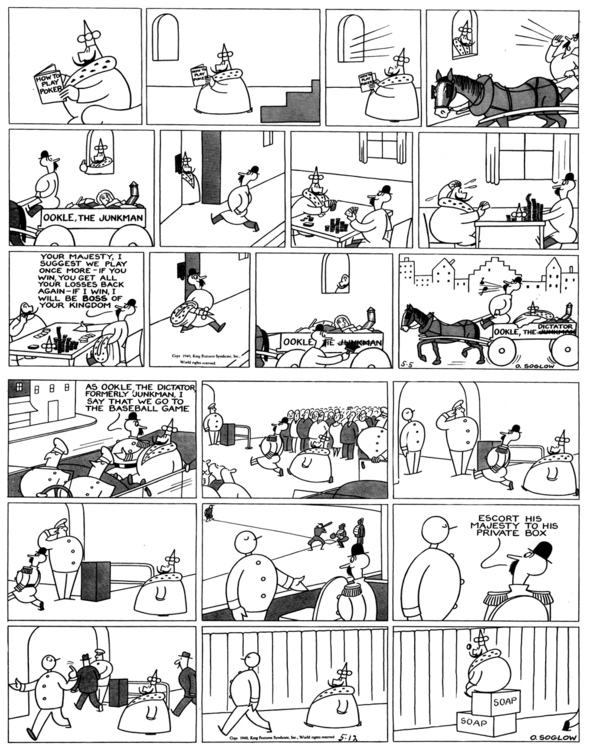 Now, one might think that a very unsuitable comedy topic might be a surrogate for Adolf Hitler, but in 1940, Der F?hrer was considered a fit subject for mockery, just as we treated the Kaiser or King Alphonso XIII or Jefferson Davis when they were the personification of our enemies. True, we were not actually at war with anyone in 1940, but there was also little doubt as to how much respect Hitler deserved. Making him a figure of ridicule was a natural impulse. Our friend Charlie Chaplin made a great film doing just this, so did the Three Stooges, all before we got into the war. 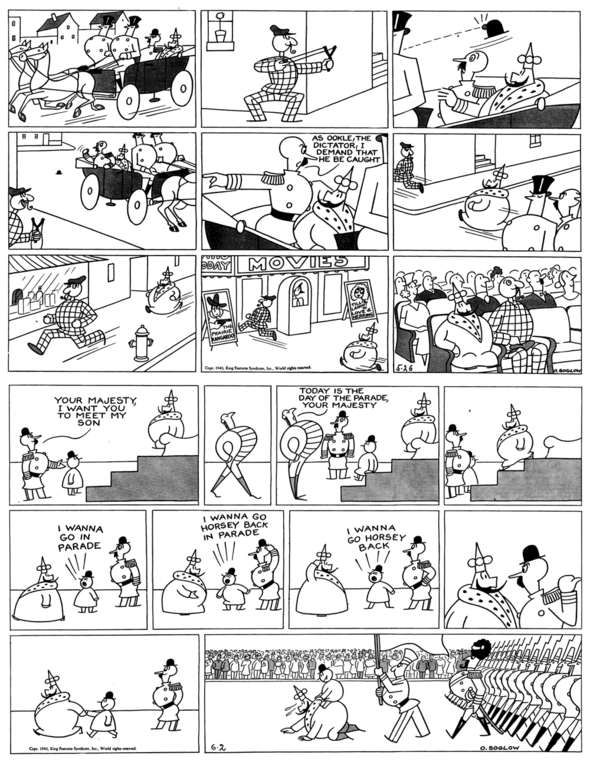 Although Soglow modeled Ookle after Hitler, his relationship with the King is probably closer to a parody of Mussolini’s association with King Victor Emmanuel III, the  disabused monarch of Italy, who became a false façade of respectability to Il Duce’s regime. He was actually known as “The Little King,” but not to his face, I would imagine. 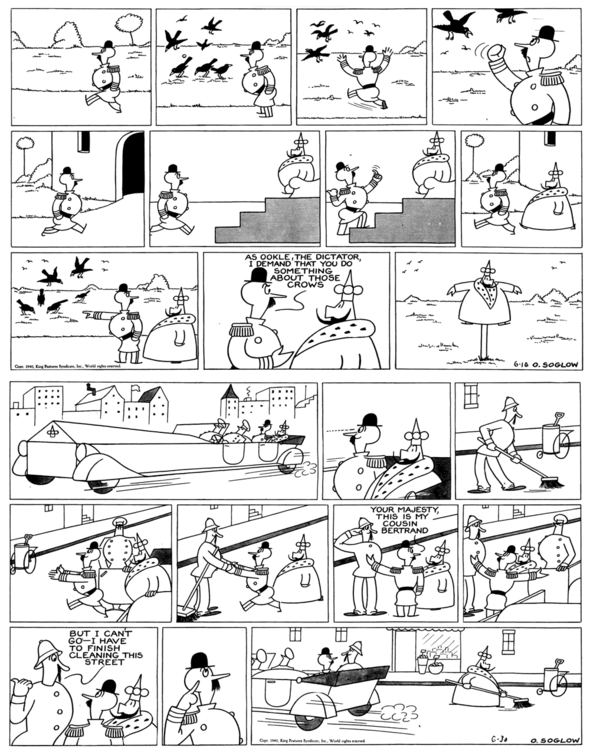 Even in the Little King’s fun and fantasy world, Ookle seems to carry some kind of menace, though. In the 16 June 1940 episode below, the King is put on a pole to become a human scarecrow, but it has the dark look of a crucifixion. Soglow himself was Jewish, so perhaps he wanted to show extra contempt for the real dictators, in his own way. 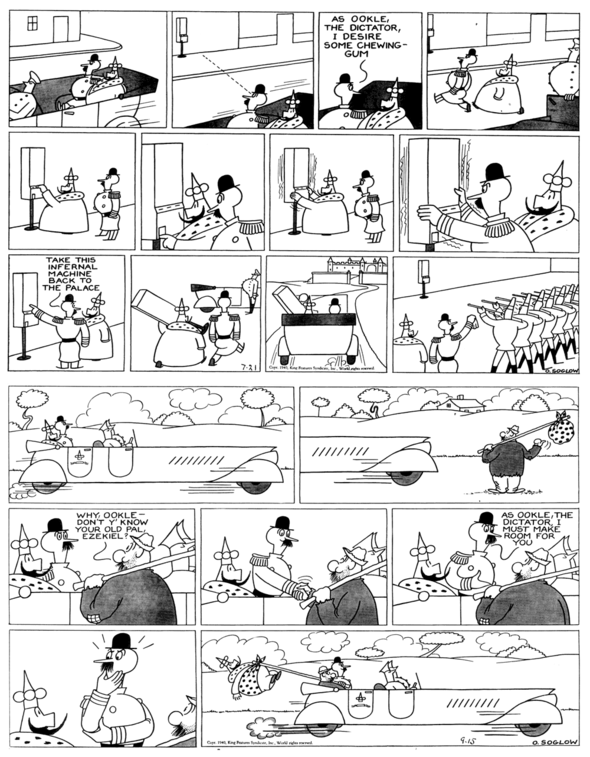 When The Little King was introduced in 1934, it was a hot new title in the comics world, See here:

It occurs to me, searching for art, that The Little King seems to be dropped most of the time from the Puck section, and few clients have the strip during this period. The idea of a funny dictator wasn’t so funny after all. Maybe it would’ve been better sometime before the World War had broken out. 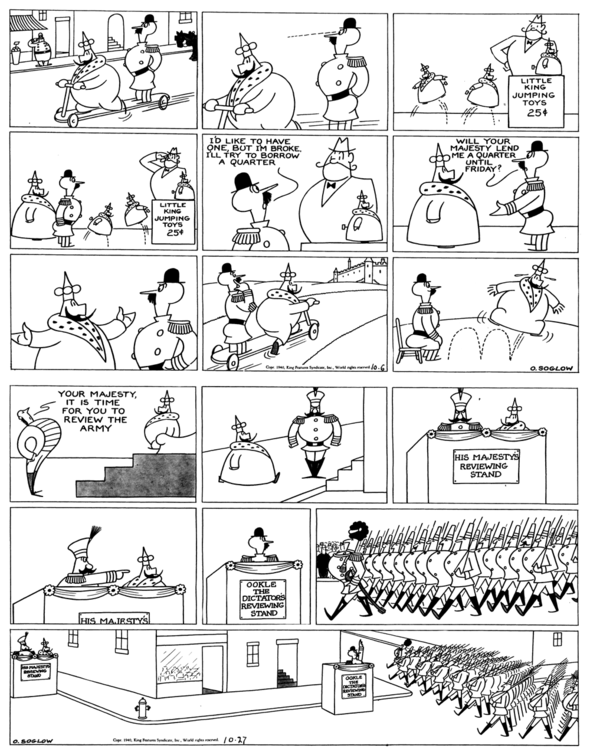 Ookle’s gags just seem to peter out after a year, and he’s usually reduced to telling the King what new occupation  he’ll dabble in  under the proposition that he is attempting to understand his subjects better by spending a day doing as they do. This gives Soglow an unlimited storyline, the King can bungle any job as well as another. 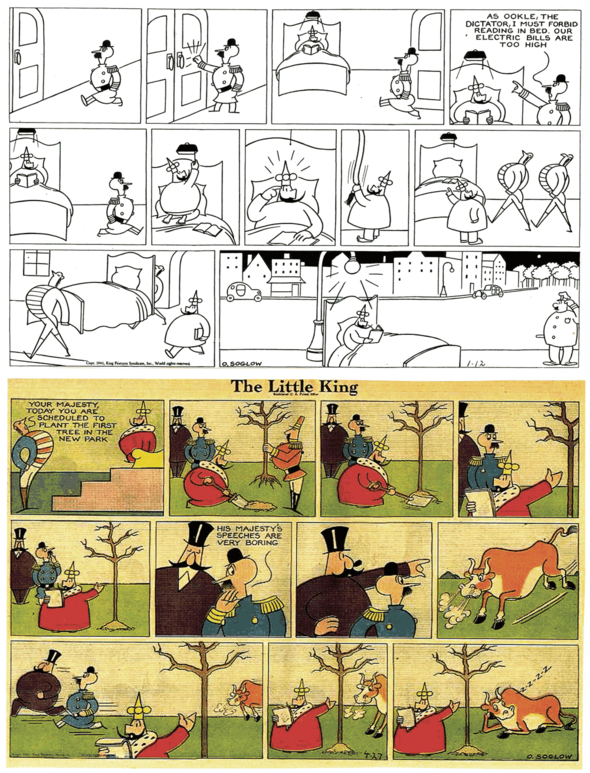 Ookle is last seen in the end of 1943, with little fanfare. 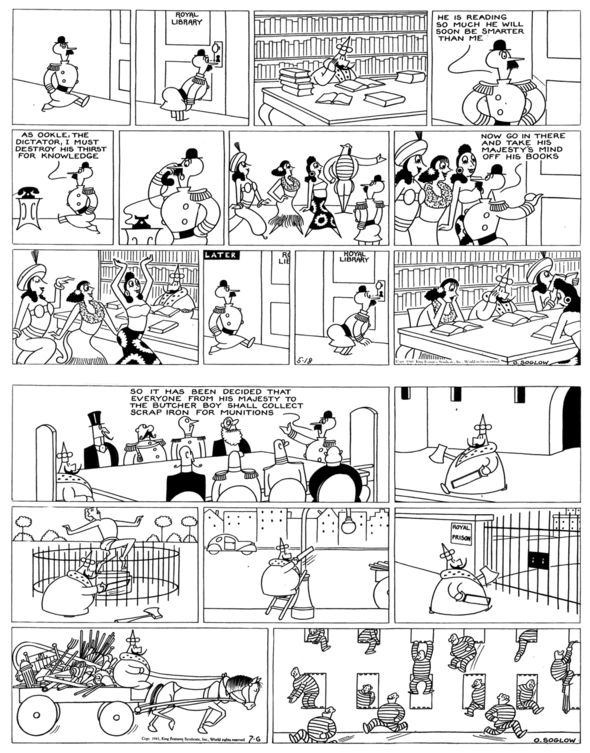 Now, on to the mailbag:

In my kid years I always looked for Breger in the daily paper- his surreal situations fascinated me. His art style looked simple at first glance, but it’s far more precise and detailed the more you might try to copy it. He made a lot of talented amateurs with his book, and he even was a cartoon/caricature teacher at the time of his death.  Many of his pupils would have him sign his cartooning book, which was never out of print until years after his 1970 demise. Next month I’ll do an entry on his contemporary, Dick Wingert.

In the “Greatest Generation” era, there were so many stories, books, movies and even comics about the fighting man’s experiences from draftee to boot camp to combat that are still around, it’s something all can yet know about and understand, perhaps in a way that no time or other war produced before or since.

You won’t see gags like Breger’s, about the ex-combat soldier who can’t stop thinking like a combat soldier in civilian life today.  I can’t say (as I’ve always been 4F and never served), but it seems to me that the soldier of 1945 had a far more grueling and dangerous day-to-day existence than today, even away from the front.  So maybe it was harder then to “turn off” that hard-focused, life-or-death military mindset a man needed to go out on a battlefield.