Mary Worth Crosses Paths With… 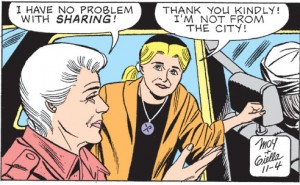 While Mary’s in New York City visiting friends, she shares a cab with Heloise, the daughter of THE PHANTOM!

Mary’s in the city to see her friend Olive.  Heloise is in the city to check out The Briarson School as a prospective student.  Their paths magically cross, like comic strip ships in the night.

Notice the amulet that Heloise wears around her neck.  It’s The Phantom’s mark of protection.

Meanwhile in a parallel universe…

The worlds of Mary and of The Phantom are existing in parallel universes for a brief amount of time!  Cue “The Twilight Zone” music!