News Around the Kingdom: Halloween Edition!

It’s that time of year when kids, big and small, dress up as fun characters, eat lots of candy, and wait for the Great Pumpkin to appear!  Or at least, that’s what Ted Forth (“Sally Forth”) is inspired to do! 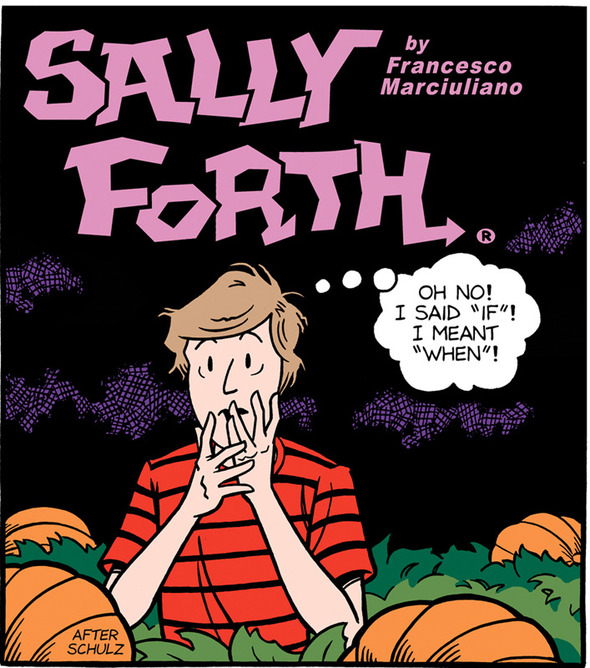 Ted Forth waits for the Great Pumpkin.

David Reddick (“Intelligent Life”) gets into a similar spirit with his Inktober drawing!  Check out some more great Halloween fan art that he shared!  The video of his hosting of the Webcomics Now panel at Chicago’s huge C2E2 convention is now live!

Jeff Parker (“Dustin”) tells us that on Sunday, “Blondie” hosted a Halloween party with some interesting guests!

A crossover is happening in “Mary Worth” and another strip starting November 3!

“Mallard Fillmore” has some entertaining guests over at his place this week including The Donald, The Hillary, and some Swiss guy!

John Rose (“Barney Google & Snuffy Smith”) was a guest on the “Daytime Blueridge”television show on WSLS TV 10 in Roanoke, Virginia!  He sketched “Snuffy Smith” while talking about his upcoming appearance at the New River Community College Comic Con!  John will present a bodacious Snuffy Smith Chalk Talk in Dublin, Virginia (just outside Roanoke) at the NRCC Comic Con on Saturday, October 31, 2015!   Go see him!

Patrick McDonnell (“Mutts”) spoke to author/designer Chip Kidd about the art of Charles Schultz (“Peanuts”) and how the comics legend inspired his work at the Strand Bookstore  in New York City last week!

Bill Griffith’s (“Zippy the Pinhead“) new autobiographical book, “Invisible Ink“, is continuing to get rave reviews!  The Miami Herald calls it “the crowning achievement in the career of Zippy the Pinhead’s creator!”  Harold Behar of the Pittsburgh Toonseum calls it a “graphic novel masterpiece!”  The New Yorker’s Francoise Mouly and Mina Kaneko interview Bill about his deeply personal memoir.

Bob Weber, Jr. (“Slylock Fox and Comics For Kids”) has a new book out called “Oh, Brother!  Brat Attack“!  Sherm Cohen, writer/artist of “SpongeBob SquarePants” says it “captures the innocence and fun of being a kid”!

Hillary Price (“Rhymes With Orange”) reminds fans that now is a time of anniversaries!  She visited some fascinating fun places recently.  If you want to visit her open studio holiday sale it’s on November 14th and 15th!

Finally, “Hi & Lois” is having a baby costume contest!