It’s almost the SpoooOOOOoooookiest time of the year!

I’m excited to be dressing up and going to parties and maybe to meet a ghost or two! So I asked our cartoonists about their Halloween plans!

On Halloween, Zippy likes to watch the ghosts fight it out on his doorstep. 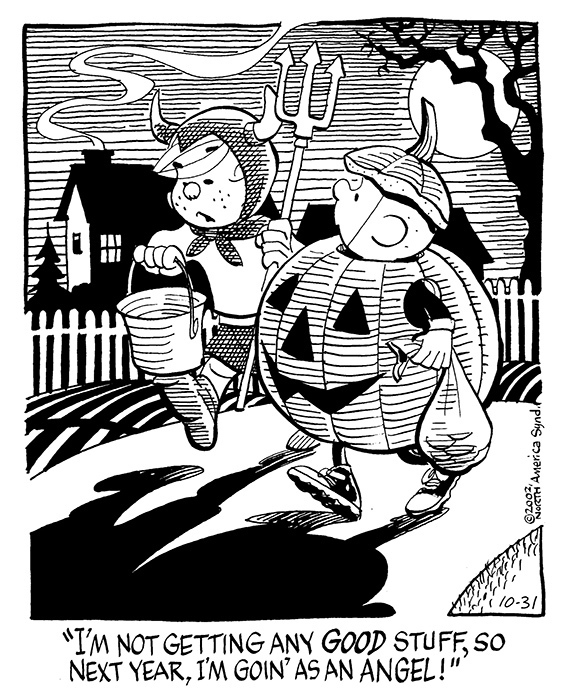 “Picking the right costume for Halloween always seems to present a challenge for Dennis.”

I am dressing as Peppermint Patty and my girlfriend is dressing as Marcie. We are paper mache-ing beach balls for our heads. It’s always a craft-filled handmade production.
Last year we were a marching band of two. In years past, we have been Piper and Alex from Orange Is The New Black and a pair of life-size bananas made from haz-mat suits.

We are generally the only adults dressed up as we take her kids trick or treating.

I grew up during the Great Depression when food was hard to come by. So the Halloween slogan of “trick or treat” became an order of “give us something to eat or we’ll get even!” We put a pile of dog-doo in a bag and went out to get some treats to eat. If our targets didn’t come through with some candy or cookies, they got some tricky dog-doo left on their front steps.” Those were desperate times.

Hey, Halloween is terrific! In my comic strip right now is a two week story about my favorite Spook, Bob the Zombie! He’s baby-sitting Spencer. Over the years I’ve had lots of spooky Halloween stories. Last year it was Dr. Frankenblort. The year before it was a vampire story. Back in 1999 Arnoldine had her first date with Bob the Zombie. Here’s the first entry in the three week story. I have the rest posted on my blog!

My wife Karen and I always go all out for Halloween! Over the years we’ve been Lukey and Elviney, Gomez and Morticia, Beauty and the Beast, Sarah Palin and Joe The Plumber and many, many more! This year we are going as Patrick Swayze and Chris Farley from the famous Saturday Night Live Chippendales skit. Halloween is one of our most favorite holidays! It’s always a bodacious day for us!

Steve and I love Halloween, and enjoy creating a handful of Trick or Treat gags each year, usually they feature Dustin and Hayden in costume. Last year, we took a different turn, and played up the other side of the candy bowl. Here are a couple of those Halloween “Dustin” strips from last year.

As for dressing up this year, I’ll be re-purposing the Charlie Brown, “I got a rock” costume I made and wore to the Haunted Hotel Party at the Reubens in May. As you can see, “I had a little trouble with the scissors.”

“When I was growing up in the ’60’s, cheap nylon costumes with plastic frontal face masks were the norm. One year my mother bought a cool devil costume for my brother and a giraffe costume for me. I hated it! Apparently I was supposed to be some sort of mutant short-necked giraffe. I hope they fired the person who thought up that stupid costume idea.”

Blondie and Dagwood threw a party last Sunday. Happy Halloween from all of us at Blondie!

We think Ted’s going to be skipping dressing up and just trying to find a sincere pumpkin patch to spend the night in.

Here’s a Halloween Doodle….Happy Halloween, everyone!

For Dethany this one’s easy. She has a new costume each year, and here’s her outfit for 2015.

“For this year’s office Halloween party at Finch Marketing, I had some fun dressing all the characters up – and if anyone knows the strip, they will note that each character actually chose a costume specific to their own interests or personality! I freakishly love little innocuous insidery details like that.”